Life aboard the ship was rough and crowded. Food was repetitive and fresh food was rare; discipline was harsh and medical care poor. Work was often tiring and required long hours folding/unfolding sails, cleaning the decks, and managing ropes. But sailors rarely questioned their harsh environment; they lived in an age where poverty, sickness, and death were a constants reality.

Every sailor fell into a daily routine that allowed the ship to function. Only well-trained, cohesive, and obedient crews were successful in battle. With rare exceptions the sailor accepted the uncompromising authority of his superiors that constituted his home sometimes over many years of triumph and tragedy. As a result, the crew became its own family that worked, ate, and had fun together.

A vessel of war contains a little community of human beings, isolated, for the time being, from the rest of mankind. This community is governed by laws peculiar to itself; it is arranged and divided in a manner suitable to its circumstances.

On board, there were varied standards of living. While conditions on the berth deck and other areas of the ship were very crowded for sailors, the captain enjoyed a somewhat spacious area he could furnish as he pleased. It was separated from the rest of the ship by a removable wooden partition, with doors guarded by a Marine sentry. Internally it was divided into several compartments: a day cabin, a sleeping cabin, and a dinning cabin.

The captain’s cabin was usually the most elaborately furnished part of the ship. Officers provided their own beds, cabin furniture and all the necessities of life according to personal taste. During battle, the crew would sometimes convert the captain’s quarters into a fighting area due to its strategic location at the back of the vessel. The dinner table for example would has been constructed in such a way that it could be taken apart rapidly.

Captain Charles Stewart purchased this refined sofa in France in the early 1800s for the captain’s cabin on the frigate Constitution. Holes for brackets might have attached the sofa to the deck.

Navigation was an essential skill for every sea officer. Ships’ officers and, in particularly the master, were expected to provide their own navigational equipment. Celestial navigation gave the captain a means of establishing the position of his ship with reasonable accuracy, though he might not have seen land for several weeks.

The master’s cabin served as the chartroom and center for navigation. The charts were stowed and used there, and all information, like wind direction and speed of the ship were transferred to the master’s log. This was the basic navigational document of the ship giving hour by hour record of such details. 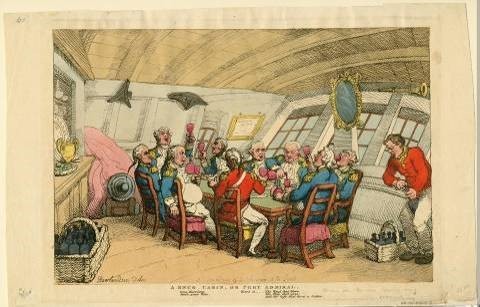 Captains ate alone at their own table in their day cabin unless they chose to invite guests. It was also traditional for them to dine in the ward room once a week. Dinner was the high point of shipboard life. By the social mores of the time, officers as gentlemen were expected to eat in a better way and on a different level than the common sailors. The obvious way to set themselves apart was to eat at different times and clubbed together to buy their own wine and food.

The captain might have had two sets of tableware: tumblers and pewter crockery for common days, and good glasses and porcelain for Sundays and visitors. During the early 19th century, fashionable tables were set with blue and white "Canton" porcelain, so called for the great Chinese trading port from which it came. During the dinner, there were various methods of keeping the dishes in place in rough weather. It was recommended to use baize-covering to keep dishes upright, especially if guests were invited. 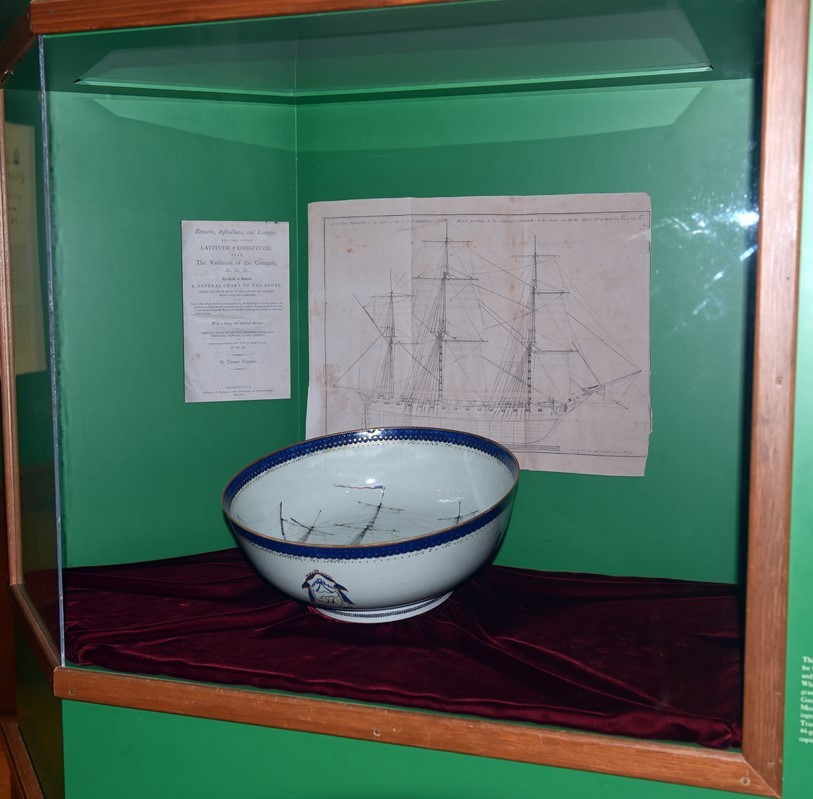 Among naval officers, punches were popular. Cold or warm, they included the juice or slices of lemon. All were strong and involved mixing at least two kinds of drinks, as a sort of precursor to the modern cocktail. This Chinese Porcelain Punch bowl was made for Commodore Thomas Truxtun who served in the Revolution and became the first captain of the frigate Constellation in 1798.

Eating was one of only two legal pleasures aboard a warship (the other was drinking) and captains treated the crew’s mealtimes with great respect. The men ate in messes of eight or ten members, with member rotating to serve as mess cook. They ate picnic style on the deck, each mess having its own space and using a piece of old canvas as a table cloth.

Food at sea was basic and repetitive, mainly made up of potatoes, beans, meat, bread and cheese but providing sufficient calories. However, the lack of fresh food led to vitamin deficiencies causing of disease. Water was carried in large quantities on board ship, but it could become quite unpleasant after month in the cask. Regardless, sailors preferred something stronger with their meals.

There were three meals a day: breakfast at 8am, dinner at noon and supper at 4pm, and one hour was allowed for each meal. As always, the men were free to buy extra food from shops in port or from bumboats.

Like the British, the U.S. Navy employed older or disabled men as cooks in their warships. They had chargeof the steep-tubs and the meat in them, and had to see the meat duly watered to remove salt and the provision carefully boiled and delivered to the men. 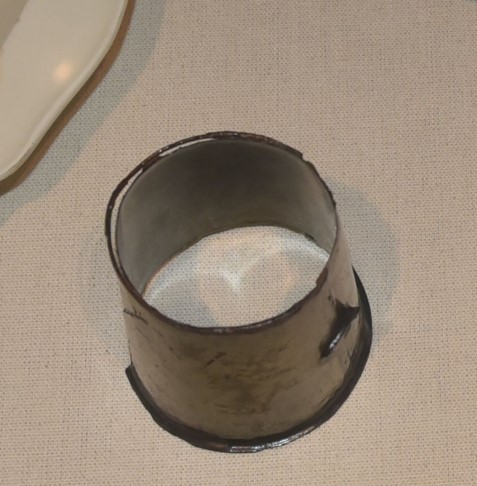 Daily liquor ration established the allowance of one half-pint of distilled spirits to each sailor. It was served in two parts, after dinner and after supper. In the U.S. Navy, grog was a mixture of American sour-mash corn whisky which was extremely popular among sailors. Drunkenness was a periodical problem among seamen, but given the conditions and monotony of service, it is hardly surprising that a sailor should turn to this form of escape

One of the greatest enemies to order and happiness in ships of war is drunkenness. To be drunk is considered by almost every sailor as the acme of sensual bliss; while many fancy that swearing and drinking are necessary accomplishment in a genuine man-of-war’s-man. 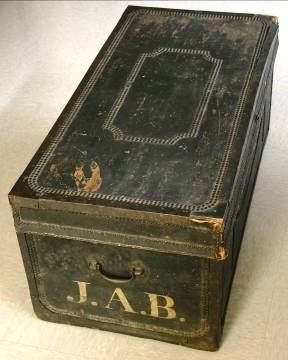 During the war, sailors carried their possessions on board ship in chests. During the cruise, their chests were stored in the ship’s hold. The initials ‘J.A.B’ stand for John A. Bates, a crew member on the frigate the frigate Chesapeake when it was stopped on the high seas by the British war ship HMS. Leopard in June of 1807.

Hammocks were loaned by the government to sailors. Their size determined the living space which was laid down in an elaborate plan devised by the first lieutenant. Sailors rarely slept more than four hours in a row. The crew space on men-of-war had little need of heating. The lower deck of a ship was so crowded that the men generated their own heat. Men of the same part of ship were kept together so that they could be mustered in an emergency. In the day time, hammocks were rolled and stowed in netting arranged along the sides of the ship, for it was believed that they had some value in stopping enemy fire.

In the course of 24 hours, the little time men had to themselves was precious. It was further reduced by the consumption of dinner and supper, so that only Saturday afternoon was theoretically reserved for leisure. Men played various games some permitted by the naval regulations; others not. Good story tellers were also always very popular on board. Music too, played a large part in the seamen’s life as well as dancing and singing songs. Though seamen were rarely permitted ashore, women were allowed to come on board if the ship remained in port. Most of them were prostitutes and slept with the men on the decks, despite the total lack of privacy. 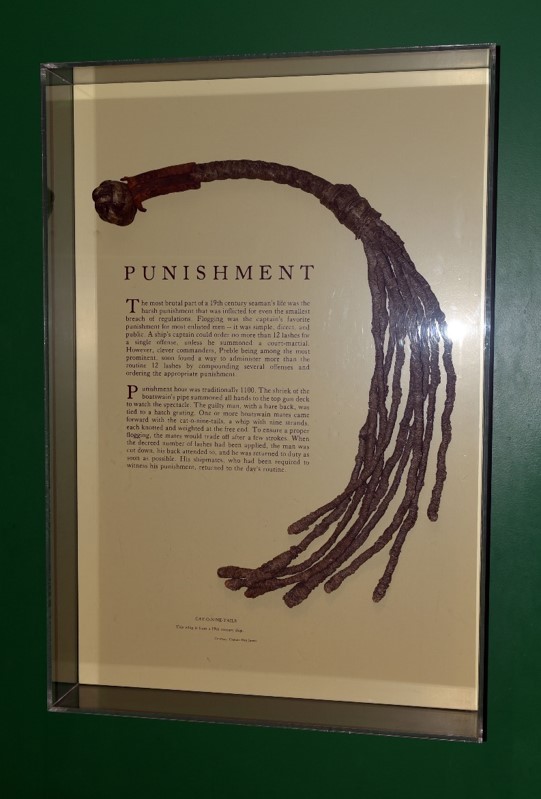 This cat-o-nine-tails whip is from a 19th century ship. Whipping was the most common form of punishment for enlisted men onboard ship. Captains would dole out public floggings for even minor infractions. Drunkenness was the single most common reason for flogging.

The health of crews was one of the most important factors governing the success or failure of naval operations. During long crossing, overcrowding, poor diet and constant humidity are the ideal conditions for illness, high rate of pain and outbreak of infections. Moreover sailor work can be dangerous and accidents were common place.

Because of low social status, poor living conditions, and long stays at sea, the navy only attracted the lowest quality surgeons and mates. Surgeons were skilled at amputation and bleeding, and little else. The naval regulations demanded that the surgeon provide himself with appropriate instruments and a medicine chest, though drugs were paid by the government.

The main medical role of the cockpit was in action, when it was converted into the ship’s operating theater. The surgeon’s untrained assistants know as ‘loblolly boys’, helped with the operations and brought the men forward for treatment. Often, there were too many sick for the cockpit, and they overflowed into the cable tiers or the gunroom and wardroom above. On most ships, the casualties were treated in strict order according to their time of arrival in the cockpit, regardless of rank. A system of triage was not used.

Amputation was termed as a capital operation - an indication of its considerable mortality. While the assistant retracted the skin, a circular sweep was made through all layers of flesh to the bone, which, in turn, was divided with a saw. A cloth tourniquet was used to control bleeding. 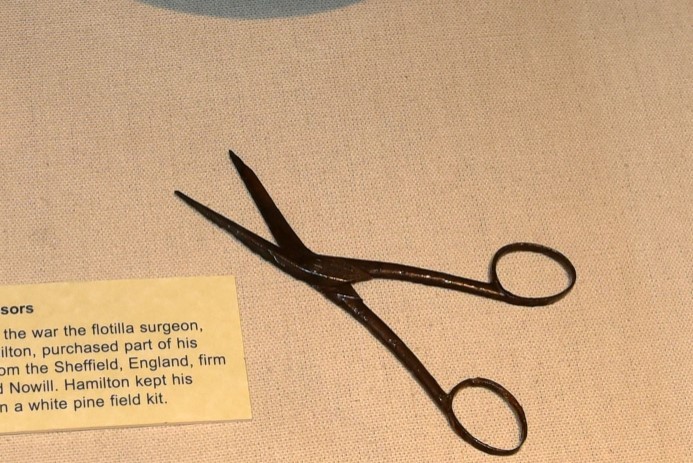 In an irony of the war the flotilla surgeon, Thomas Hamilton, purchased part of his medical kit from the Sheffield, England, firm of Hauge and Nowill. Hamilton kept his instruments in a white pine field kit.

Threphining, also called second capital operation, was performed in an attempt to lift a compressed skull fracture or to drain an intracranial hematoma.

Sexually transmitted infection led to the development of urethral strictures, and difficulty in passing urine was common among sailors. Catheters made of silver or gum elastic were inserted into a body cavity to relieve the suppression of urine.

The poor diet of the sailor led to bad dental conditions. The tooth key, tooth forceps, and the punch elevator were used to extract diseased teeth. The gum lancet was used for draining gum-boils as well as for therapeutic bleeding within the mouth.

During sea battles, small missiles such as musket and pistol balls could lodge in the body. Wounds containing foreign material had to be explored, and the pieces were removed with probes or probe scissors.

Bleeding was performed for a multitude of ailments, and particularly recommended for inflammatory conditions. The blood was removed through an incision made with a thumb lancet and drained 20-30ounces (600-900ml) of blood.

The surgeon and his mate were smeared with blood from head to foot. They looked more like butchers than doctors […]. The task was most painful to behold, the surgeon using his knife and saw on human flesh and bone as freely as the butcher at the shambles.

In battle the surgeon used the midshipmen’s table if available, or sea chests lashed together to operate on. Naval surgeons heated their knives in scalding water in the belief that a hot knife made the operation faster. This had the unintended effect of providing some degrees of antisepsis. Anesthetics in the modern sense were unknown at the time, leaving only rum and laudanum as crude alternatives. A skillful surgeon could perform an amputation with remarkable speed – sometimes in as little as two or three minutes. Speed was essential, not simply to save man from bleeding to death, but to allow time to attend to all of the other cases, whose numbers could at times, be overwhelming.