Both the most celebrated and least appreciated struggles of the War of 1812 took place at sea, where for twenty years the British Royal Navy had crushed every European rival in an ongoing war. A string of American victories over British warships brought much needed public support, while American naval cruisers and privateers captured vulnerable British merchantmen; a less glorious role that nonetheless carried war to Britain’s doorstep. 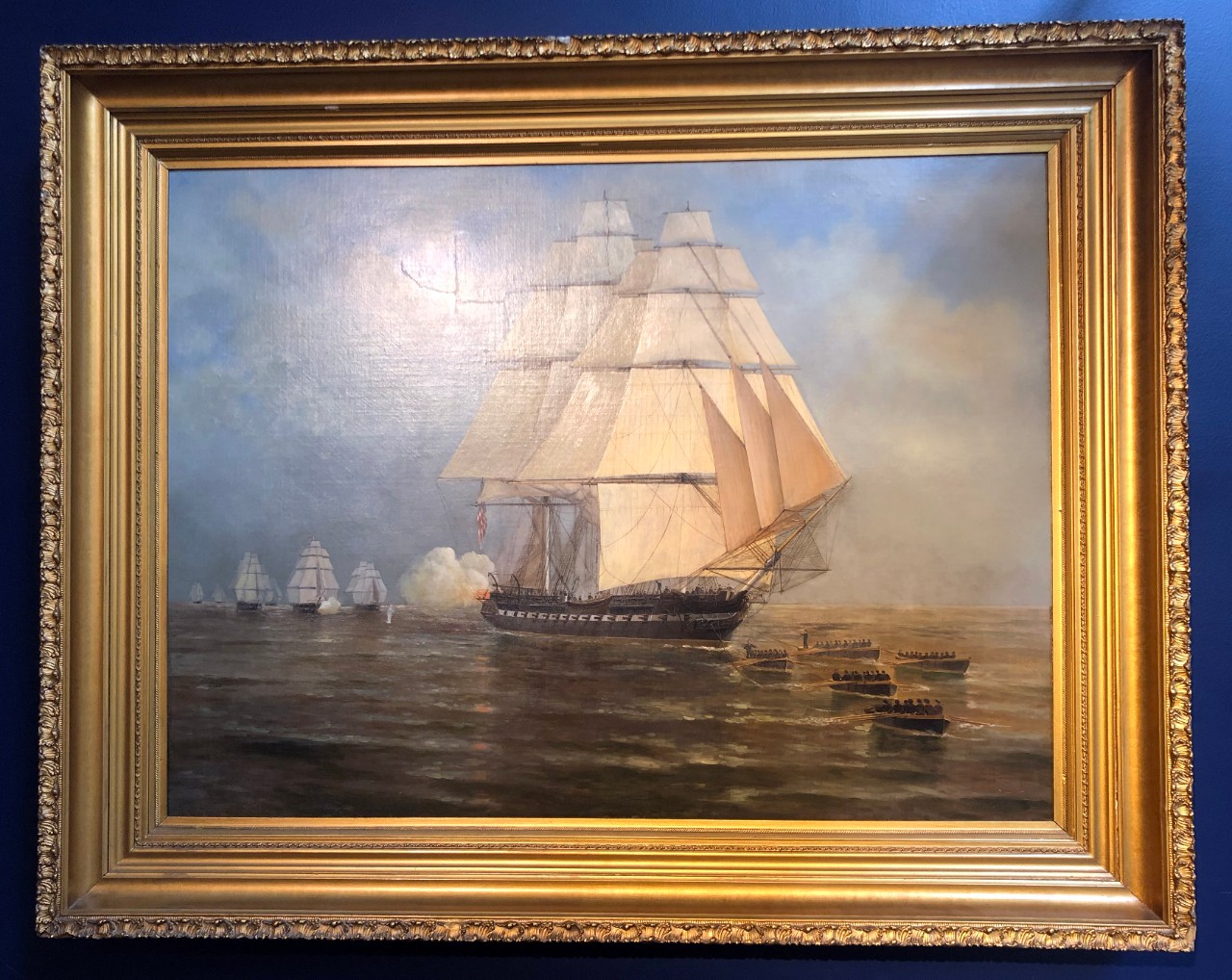 This painting by Muller shows the U.S. frigate Constitution escaping from a British squadron of five ships on July 17, 1812. Upon leaving Annapolis and the Chesapeake Bay, Constitution fell in with a powerful British squadron off New Jersey. For fifty hours the captain, Commodore Isaac Hull, used every method at his disposal to out sail the enemy, finally escaping in a squall. The painting shows sailors in boats towing Constitution away from pursuers during a calm.

This painting is on display in the Constiution Gun Deck display area in Bldg. 76.

American Naval Capabilities at the Beginning of the War

On the eve of the declaration of war in June 1812, American policymakers widely believed that a land invasion of Canada would succeed within a year and force Britain, already weary of a 20 year war with France, into a peace settlement. The disparity in size between our two navies did not – in their minds – gravely threaten American objectives. Looking at a comparison of the entire U.S. Navy to the fraction of the British Royal Navy on stationed near our seaboard in 1812, would you have taken the same view? 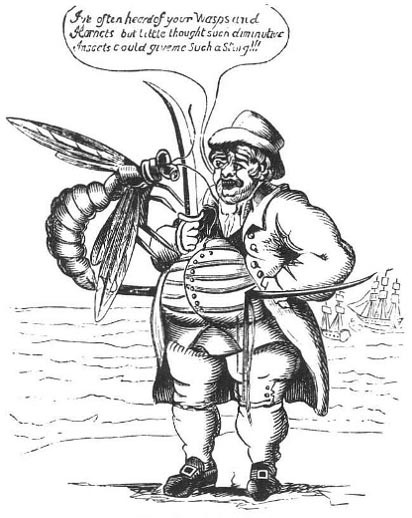 "A Wasp took a Frolic and met a Johnny Bull, Who always fights his best when his belly is full. The Wasp thought him hungry by his mouth open wide, So, his belly to fill, put a sting in his side.” “I’ve often heard of your Wasps and Hornets but little thought such diminutive Insects could give me such a sting!!!"

This cartoon was published in the United States in 1812 after U.S. sloop-of-war Wasp defeated the British brig Frolic. The man stung here by the wasp personified Americans’ view of the British as greedy and arrogant. Britain’s attempt to establish de facto rule of the seas in the decades before 1812 roused anger in America as U.S. merchant ships – the source of her prosperity - were continually subjected to search and seizure.

British valour and Yankee boasting or Chesapeake versus Shannon.  Courtesy of the Library of Congress, : LC-USZC4-5918.

Comic text: “Down with your colors you swabs, down with your stripes or D- me we’ll stripe you!” “Stand clear messmate whilst I have a few of these Lubberly Yankee Doodles overload.” “Go along d-n you don’t you see they are waiting dinner for you” “Friends, I think that you had better come & sit down for if we wait til the Chesapeake comes back I am afraid the Dinner will get cold.” “I don’t think they will want much dinner for they seem to have got their Belly full.”

This cartoon was published on September 1, 1813, in Britain; exactly one month after HMS Shannon defeated the U.S. frigate Chesapeake off Boston. Having lost three frigates to the Americans in 1812, this victory was greeted with jubilation in the United Kingdom. The British sailors are depicted easily raising the union jack over a cowardly American crew. The loss of Chesapeake gave the navy the battle cry: “Don’t give up the ship!” 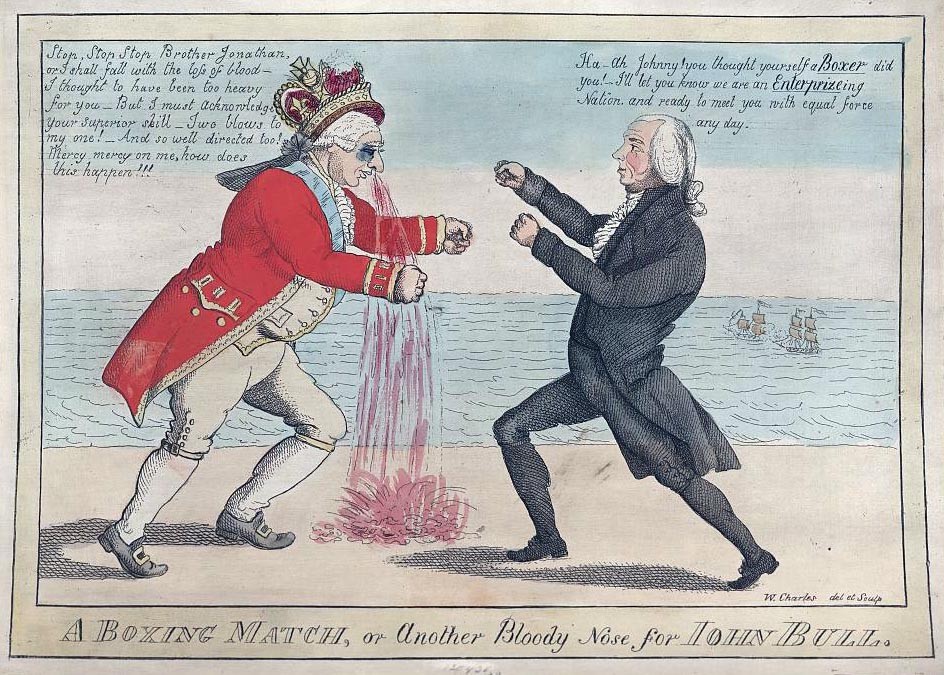 Boxing match or another bloody nose for John Bull Cartoon.  Courtesy of the Library of Congress, LC-USZC4-1131.

Comic Text:  “(Redcoat) Stop, stop, stop brother Jonathan or I shall fall with the loss of blood - I thought to have been too heavy for you - But I must acknowledge your superior skill - Two blows to my one! – And so well directed too! Mercy, mercy on me, how does this happen!!! (American) Ha-ah Johnny you thought yourself a Boxer did you! – I’ll let you know we are an Enterprizeing Nation, and ready to meet you with equal force any day.”

This comic was published in 1813 in the United States after U.S. brig Enterprise defeated HM brig Boxer. It compares a large but unskilled British Royal Navy to a small but well-manned American Navy. The words of the Englishman allude to American prowess with ships’ guns, which along with a large American crew, decided this contest.

Morale on the Home Front

While the American army and militia suffered continuous setbacks in the vast wilderness of the Canadian frontier and Chesapeake tidewater, news of their defeats was punctuated by American victories at sea. Looking for champions of their cause, Americans wrote songs honoring the victorious captains, vessels, and crews. Captains who won individual battles or led successful commerce raiding voyages became national heroes and the reputation of the American Navy grew, at home and abroad. 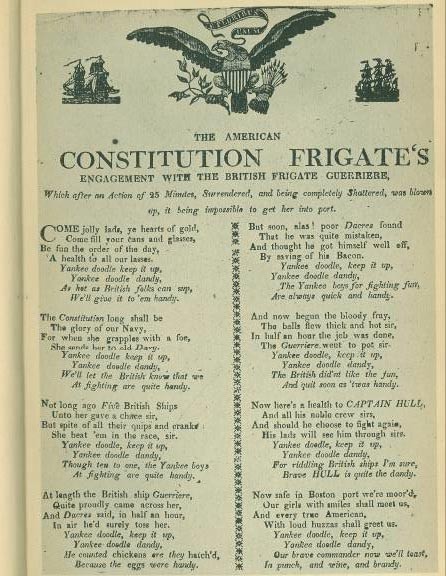 Song to the tune of Yankee Doodle that celebrates the frigate Constitution’s victory over HMS Guerrière in August 1812.

On August 19, 1812, the U.S. frigate Constitution captured the frigate HMS Guerriere off Halifax, Nova Scotia. During the intense broadside fire, Guerriere’s mizzenmast fell over the side crippling her ability to maneuver. After the bowspirit of Guerriere became entangled in Constitution’s rigging, both sides attempted to board but the seas were too heavy while at the same time marksmen fired at exposed personnel. When the ships separated, the British frigate’s foremast collapsed pulling the mainmast with it. At that point, Guerriere had no other choice than to surrender.

During the War of 1812, American warships won over a dozen ship-to-ship actions at sea, taking several British ships as prizes, and creating a new cast of national heroes, such as Hull, Decatur, and Lawrence. Among these ships, the frigate Constitution won a special place in history: she sank or captured four British warships and survived the war undefeated. Today the ship is still afloat in Boston; the oldest commissioned vessel in the U.S. Navy. 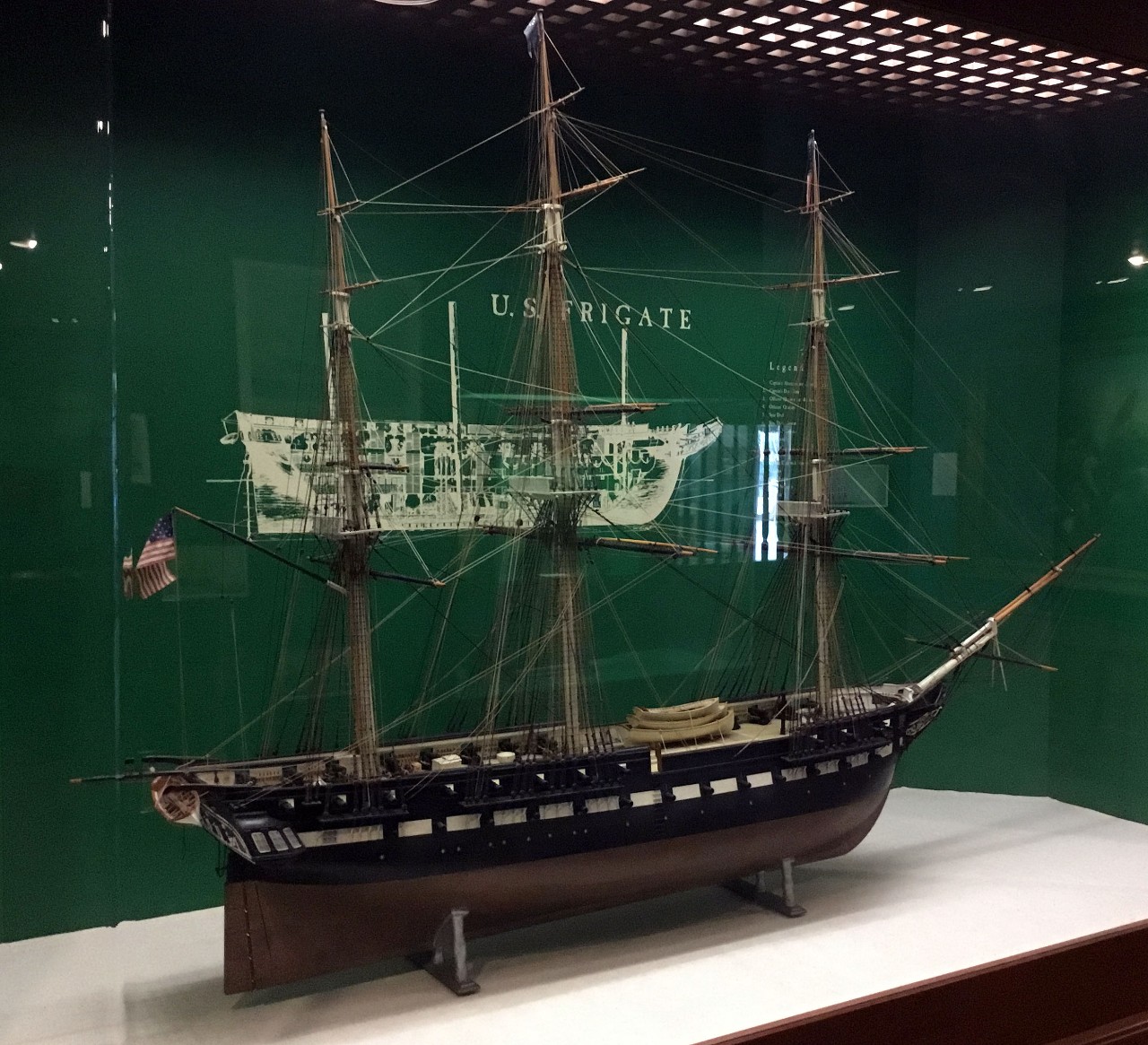 The frigate Constitution first put to sea in 1798 under the command of Captain Samuel Nicholson, to serve in the wars against France and Tripoli. Within months of declaring war on Britain in 1812, Constitution earned the nickname “Old Ironsides” in her dramatic victory over HMS Guerrière, when crew members noted how cannonballs seemed to bounce off her sides. Later that year she defeated HMS Java, a frigate of the same class as Guerrière. In 1815 she escaped the British blockade and defeated Cyane and Levant, two British sloops, in a night action. Constitution continued to serve during the 19th and 20th centuries and now is moored in Boston Harbor. The model’s armament reflects an error made in the ship’s restoration in 1927-31; during the war she carried thirty 24-pound cannons and between twenty and twenty-four 32-pound carronades.

This model is located in The Forgotten Wars of the 19th Century exhibit area in Bldg. 76. 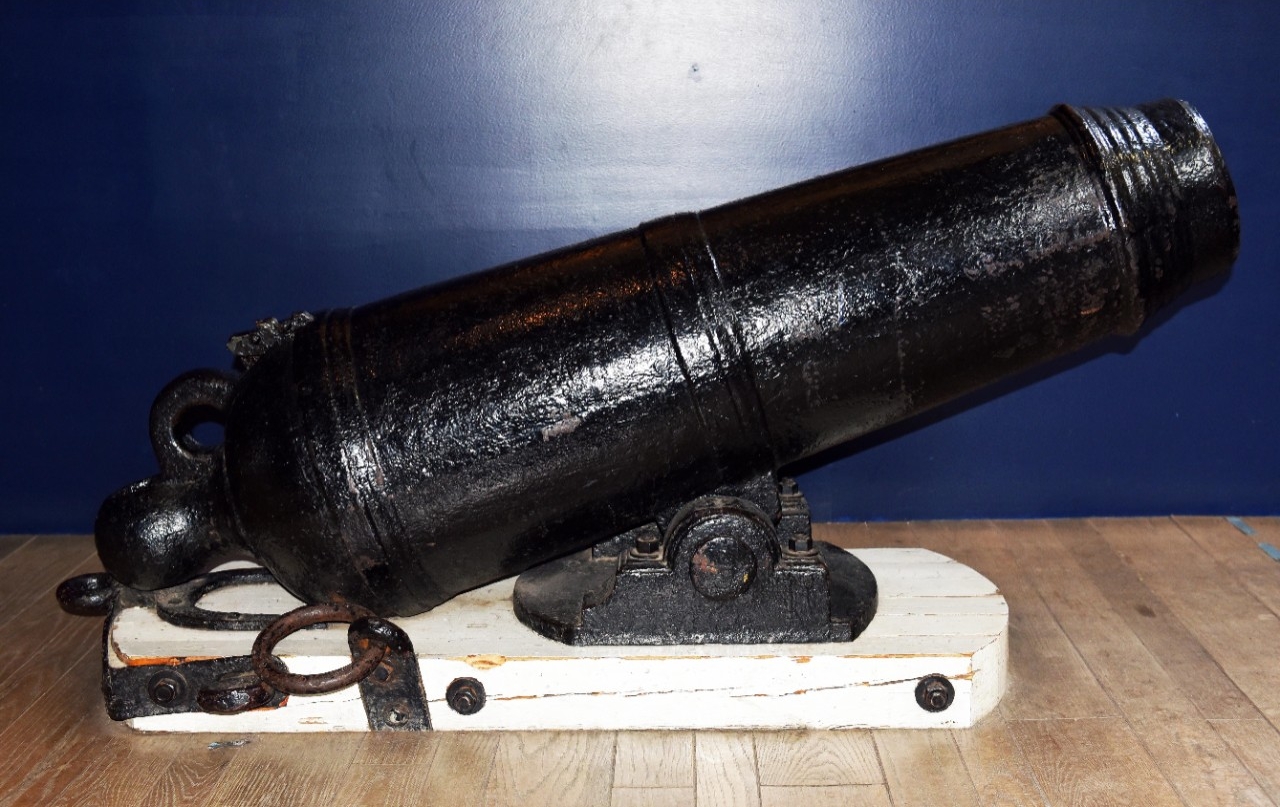 Like many American ships, Constitution was armed with carronades as well as cannon. Carronades are much shorter and lighter than cannon that fire the same weight of shot, but have a much reduced effective range; only about 200 yards to the cannon’s 1000. Carronades were popular in the U.S. Navy because for the same total weight, they offered more firepower; vessels generally carried more guns than they were rated for this reason. In the case of the U.S. frigate Essex, however, replacing the main deck cannon with carronades proved unwise; she was defeated when unable to close with her British opponents, who simply stayed outside carronade range.

This artifact, and the next four, are located in Constitution Gun Deck area in Building 76. 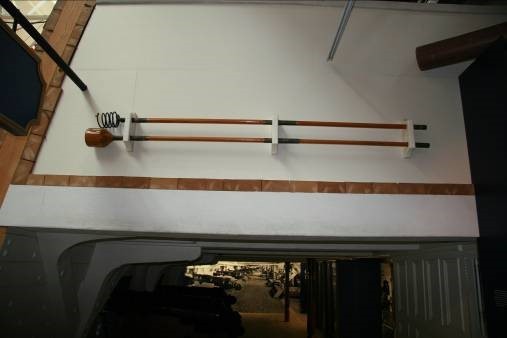 These guns tools are similar to those used by the gun crews of frigate Constitution. Each of the frigate’s 24 pounder guns had a crew composed of thirteen seamen and a midshipman. Under the direction of their officers, the crew would load and fire their guns as rapidly as possible. After firing, the gun would be sponged and wormed to extinguish sparks and extract hot fragments; then a bag of powder, cloth wadding, and shot would be rammed home. After the vent was primed with fine powder, and the lock cocked, the gun was ready to be fired. This could take as little as a minute with a fresh, practiced crew. 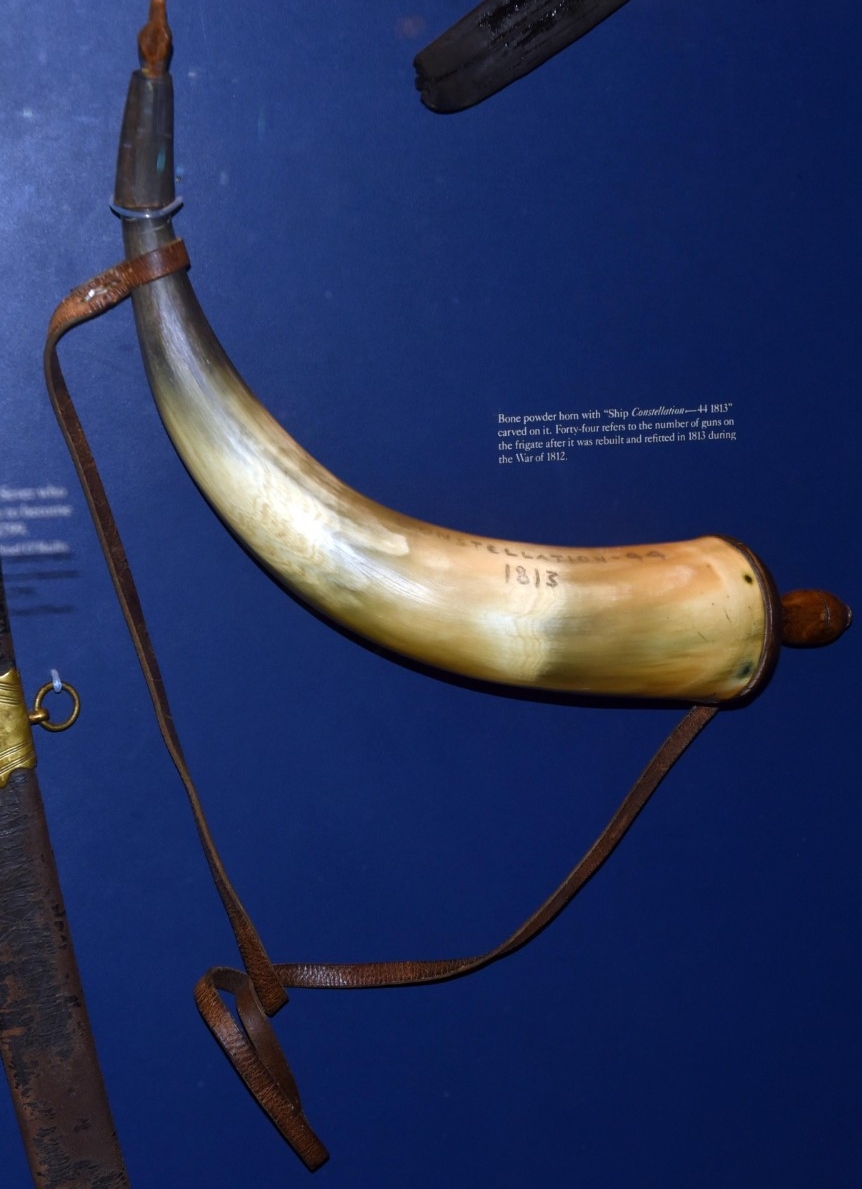 Bone powder horn with “Ship Constellation – 44, 1813” carved on it. Forty-four refers to the number of guns the frigate was rated for after it was rebuilt and refitted in 1813. Powder horns held the fine powder used to fill the firing pan of a cannon. The funnel shape of the horn made it easy to pour the right amount of powder into the small pan without spilling any powder. 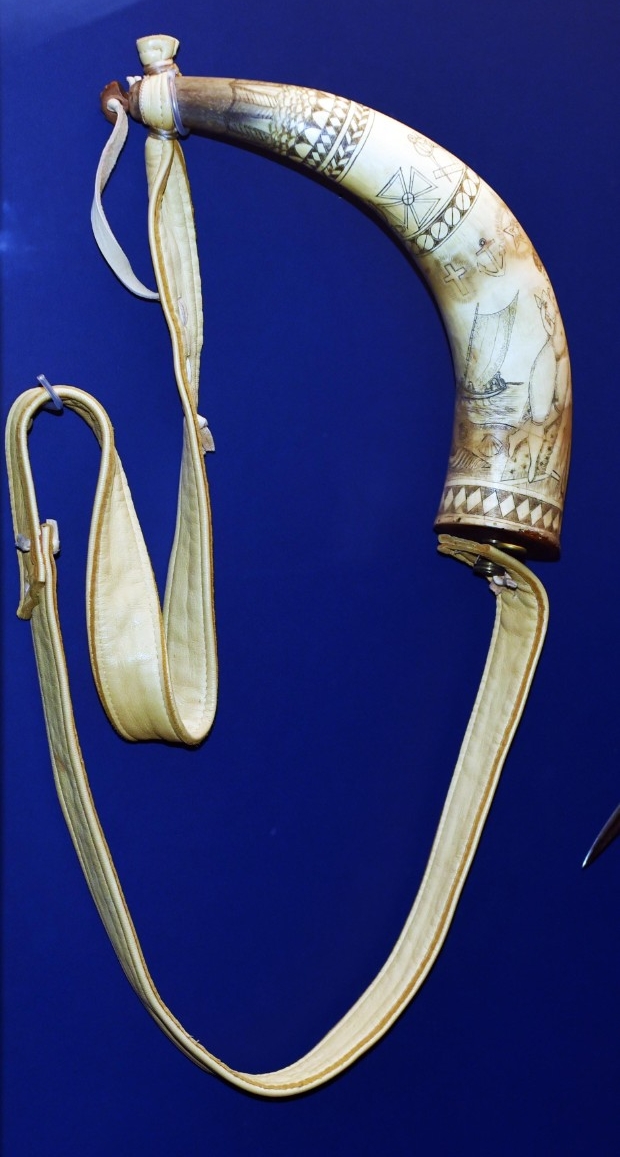 This 19th century powder horn is decorated with Masonic and other popular symbols. The cross, anchor, and star symbolize faith, hope, and charity. The crescent and star represent divinity and sovereignty in Islam. The frog – from the well-known fairy tale – is waiting for the kiss that will restore him to a prince. In peacetime more time and money could be spent on such decorations. 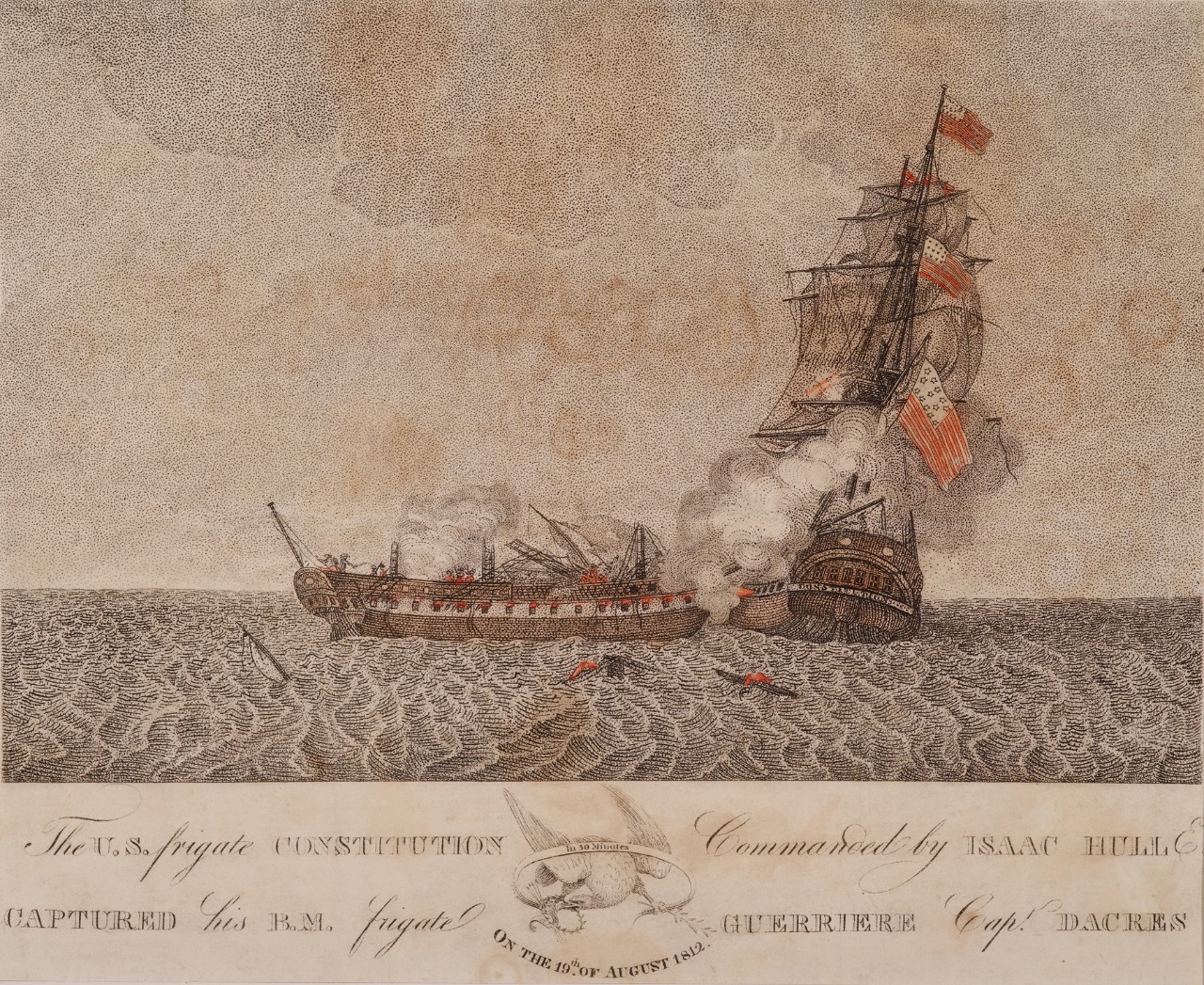 This broadside was published in New York City a month after the battle on August 19, 1812. It emphasizes the remarkable brevity of the battle with the words “In 30 Minutes” printed on the ribbon in the beak of the eagle emblem below the image.   The frgiate Constitution under Commodore Isaac Hull was cruising off the coast of Newfoundland when the crew spotted the British 38-gun frigate Guerrière. After two hours of battle, Guerrière surrendered with the loss of all her masts and three-tenths of her crew: 10 times the proportion of Constitution’s casualties. Guerrière was intentionally destroyed the next day when it was noticed that she was taking on too much water to survive a tow to an American port. 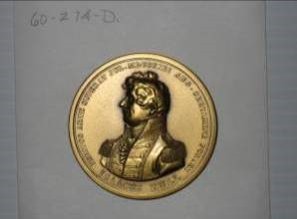 On January 29, 1813, Congress awarded this medal to Commodore Isaac Hull. Bearing his likeness, it honored his part in the victory of the frigate Constitution over HMS Guerrière; the lesser commissioned officers of the Constitution received a silver medal. Casting a medal was precise work and it was expensive to form each mould, so it was impractical to make only one copy. Besides the captain’s gold copy, and the lower-ranking officers’ silver copies, bronze copies were made for distribution, and after 1855 for general sale to the public. 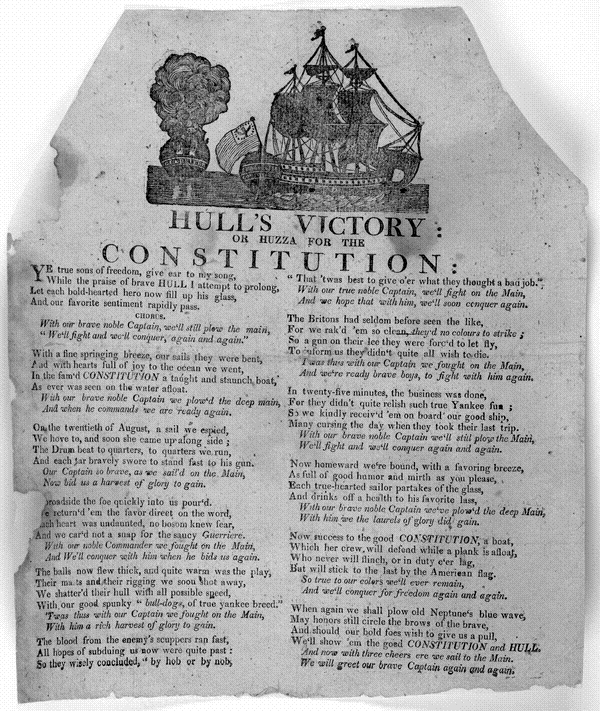 Hull’s Victory or Huzza for the Constitution Print.   Courtesy of the Library of Congress, LC USZ62 40733.

Just months after the war began, the defeat of HMS Guerrière was an event widely celebrated in America, coming as it did days after the American army at Detroit was surrendered en masse. The victory was also the first of several which proved that American-made frigates were both well built and manned by capable sailors, and which destroyed the image of British Royal Naval invincibility. This song was written and published in 1812 to celebrate the victory. 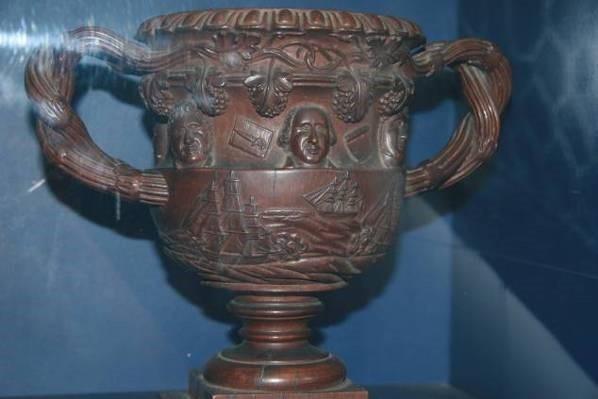 This oak vase was carved of wood from the frigate Constitution. The scene carved on the bowl depicts Captain Isaac Hull’s victory over Guerrière.