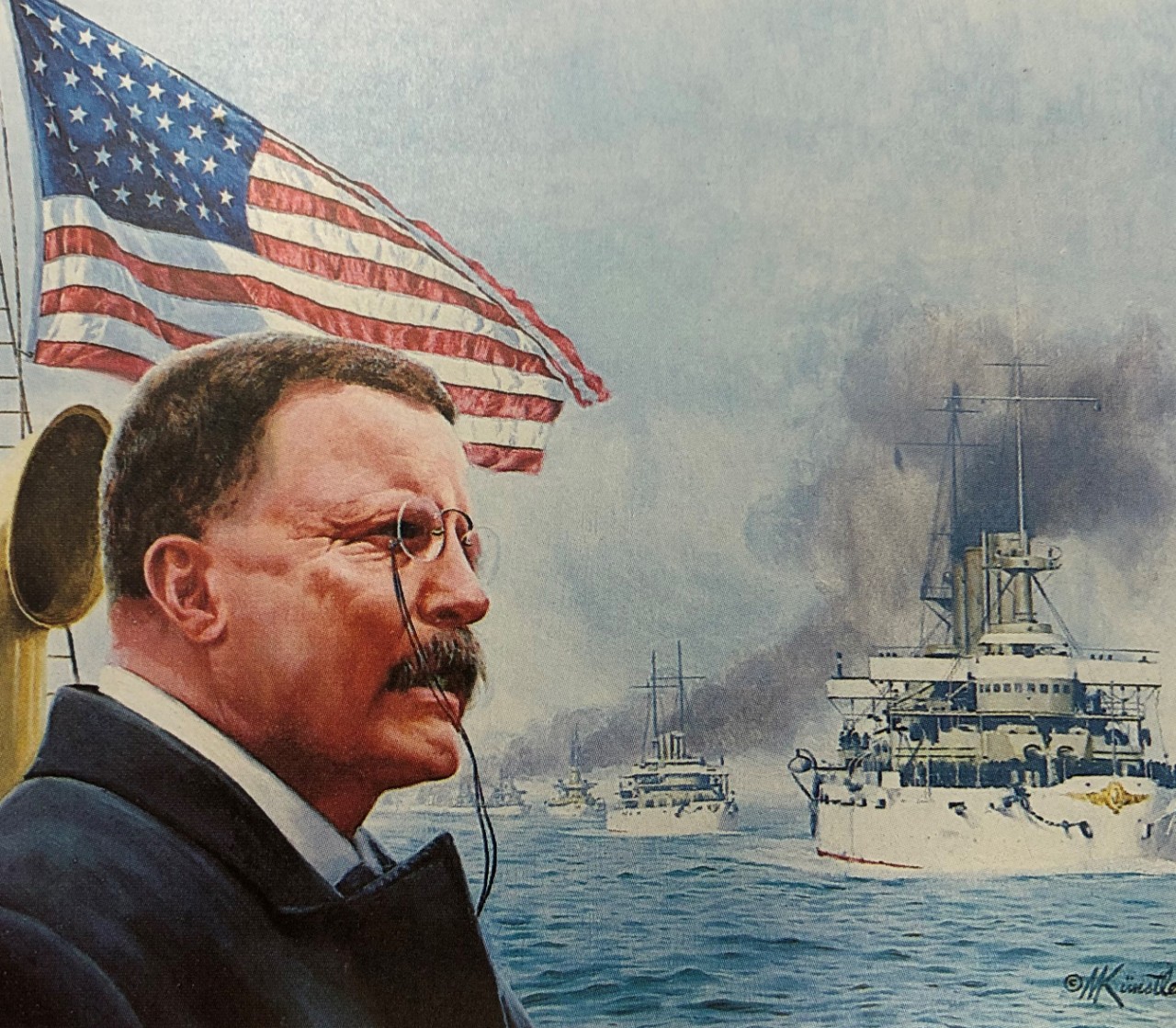 Artist-illustrator Mort Kunstler exhibited twelve of his paintings at the Navy Memorial Museum (now National Museum of the U.S. Navy) in 1982. One of the special qualities of this collection of paintings was its concurrent representation of two unrelated periods of time. Individually, each painting vividly recreates a moment of drama, intrigue, heroism, or humor which took place during World War II. Collectively, however, they represent an important, if not vital, period in the professional development of Kunstler.

Demonstrated in Kunstler’s work is a masterful command of all elements, with the effective blending of action, light, color, figure work and perspective into dramatic compositions to enhance the subject matter.
The Kunstler show was part of the reopening ceremony at the museum, which had been closed for one year during building renovations.

The Director of the Museum at the time was Dr. Oscar Fitzgerald. 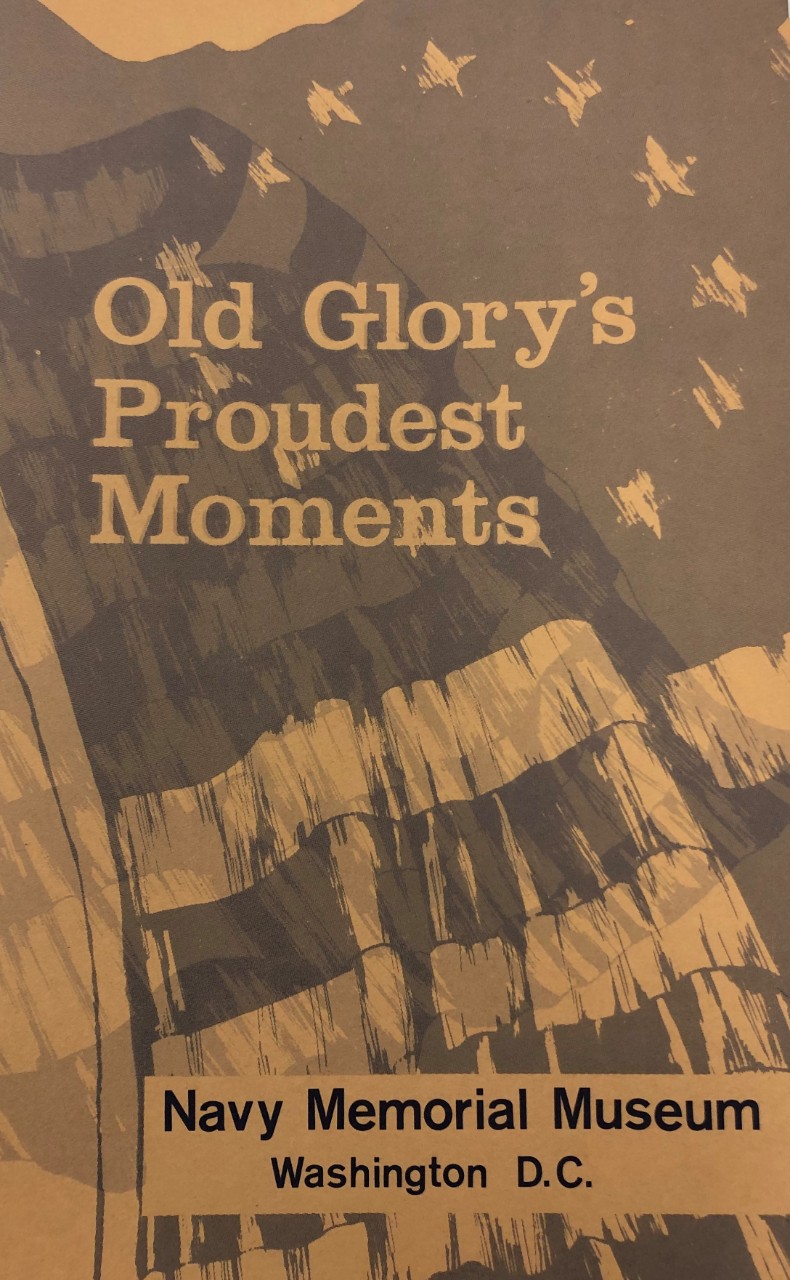 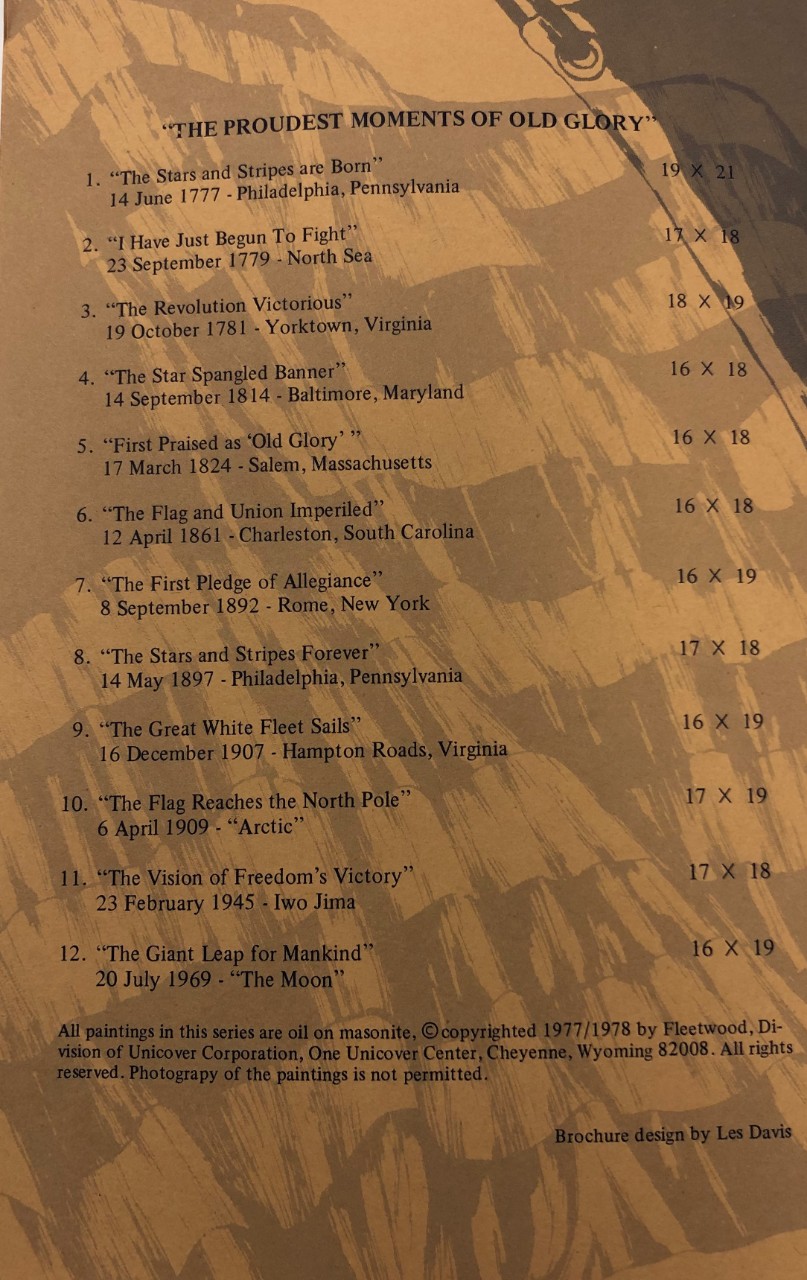 Mort Kunstler whose last name appropriately means “artist” in German was born and raised in New York City. Interested in art at an early age through the encouragement and tutoring of his amateur artist father, he began drawing the familiar objects which surrounded him. With persistent practice, he developed a keen ability to observe and record. First attending Brooklyn College, Mort transferred to UCLA for his senior year and subsequently enrolled in Pratt Institute to continue studying art in preparation for a career as an illustrator.

From his affiliation with National Geographic Magazine, he learned the value of accuracy and authoritative research when painting historical subjects, and frequency travels to exact locations for on the spot sketches and the advice of experts in the subject he is painting. In pursuing a goal of perfection in historical accuracy as well as artistic presentation Mort Kunstler’s style has set new standards for historical painting and contributed to the resurgence of realism in art.

Mr. Kunstler’s works are contained in numerous public and private collections throughout the country and have been featured in National Geographic, The Saturday Evening Post, and on the covers of Newsweek. His works have been exhibited at the Boston Museum of Art; New York Historical Society; Museum of Arts and Sciences, Daytona Beach, Florida; Old Orchard Museum, Sagamore, New York; and a one-artist show at the prestigious Hammer Galleries in New York City.

This exhibit of twelve paintings by one of America’s foremost artists, illustrator Mort Kunstler, depicts landmark events in the history of the United States Flag from its birth by an act of Congress on June 14, 1777, to its unfurling on the Moon on July 20, 1969. Several of these scenes also depict particularly proud moments for the United States Navy; they include, John Paul Jones’ defeat of HMS Serapis in 1779, President Theodore Roosevelt dispatching The Great White Fleet on its around-the-world cruise in 1907, and Admiral Robert E. Peary’s trek to the North Pole, April 6, 1909.

In preparing his paintings, Mr. Kunstler visited many of the sites depicted and searched untold references for exacting detail. For example, in his work on The Great White Fleet Sails (above), he was able to find and work from previously unpublished photographs of President Theodore Roosevelt; and in his work on I Have Just Begun to Fight, he worked closely with this Museum, and the U.S. Naval Academy Museum in Annapolis, Maryland, as well as a number of experts in Naval History and Marine Architecture.

This series, originally commissioned by Fleetwood (a division of Unicover Corporation) for a series of philatelic commemorative proof cards bearing historic U.S. postage stamps cancelled on the anniversary of the event depicted, was officially authorized by The Freedoms Foundation at Valley Forge.

These paintings were made available through the courtesy of the artist and Hammer Galleries of New York City. 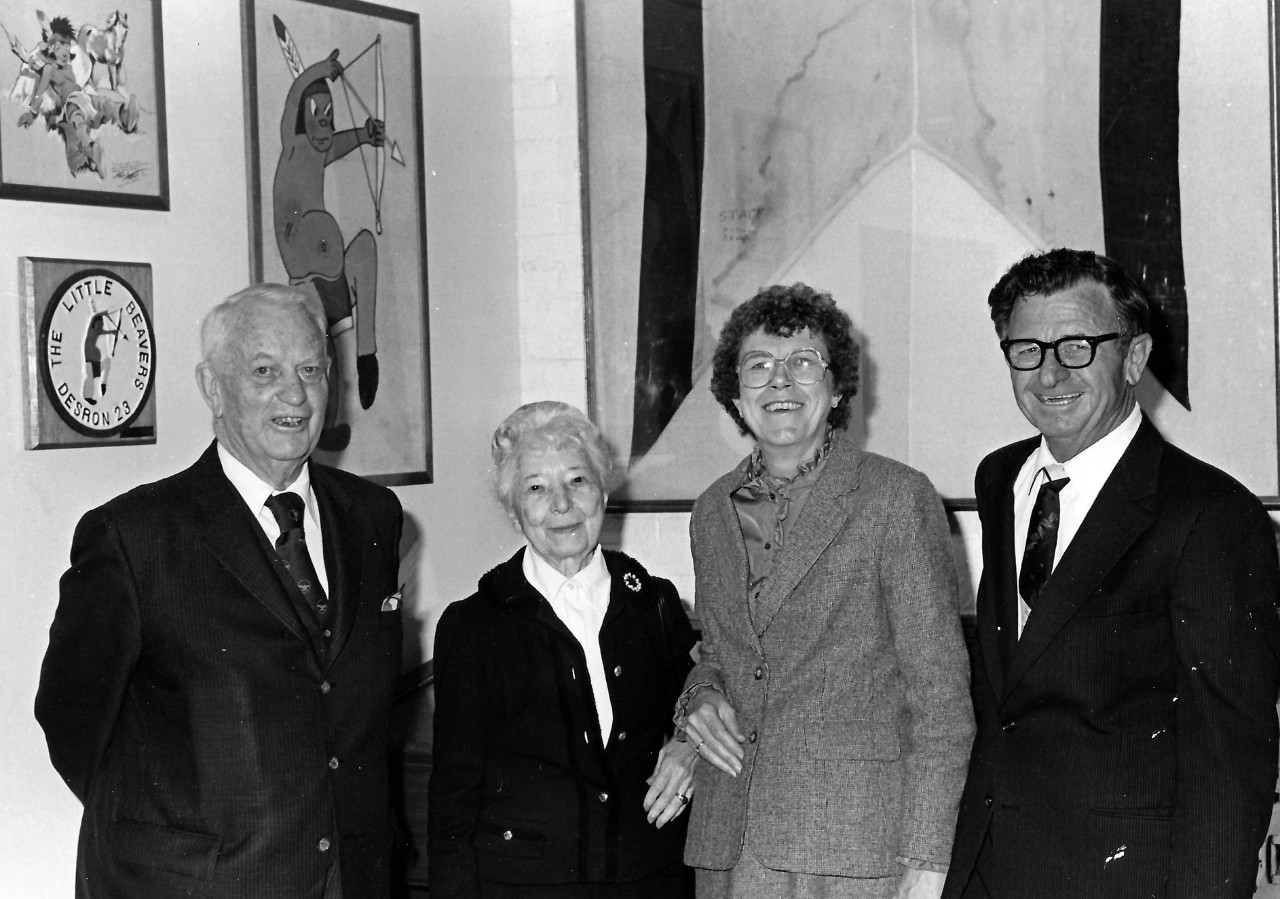 NMUSN-86:  Admiral Arleigh A. Burke, USN, (Retired), and Wife, 1982.    Admiral Arleigh A. Burke and wife (left) are photographed with two unidentified guests at the Navy Memorial Museum (now National Museum of the U.S. Navy) during the opening of the Mort Kunstler Art Exhibit:  The Proudest Moments of Old Glory.   Admiral Burke is shown next to the Little Beaver area -- DESRON 23 in the World War II: Pacific area.    National Museum of the U.S. Navy Photograph Collection. 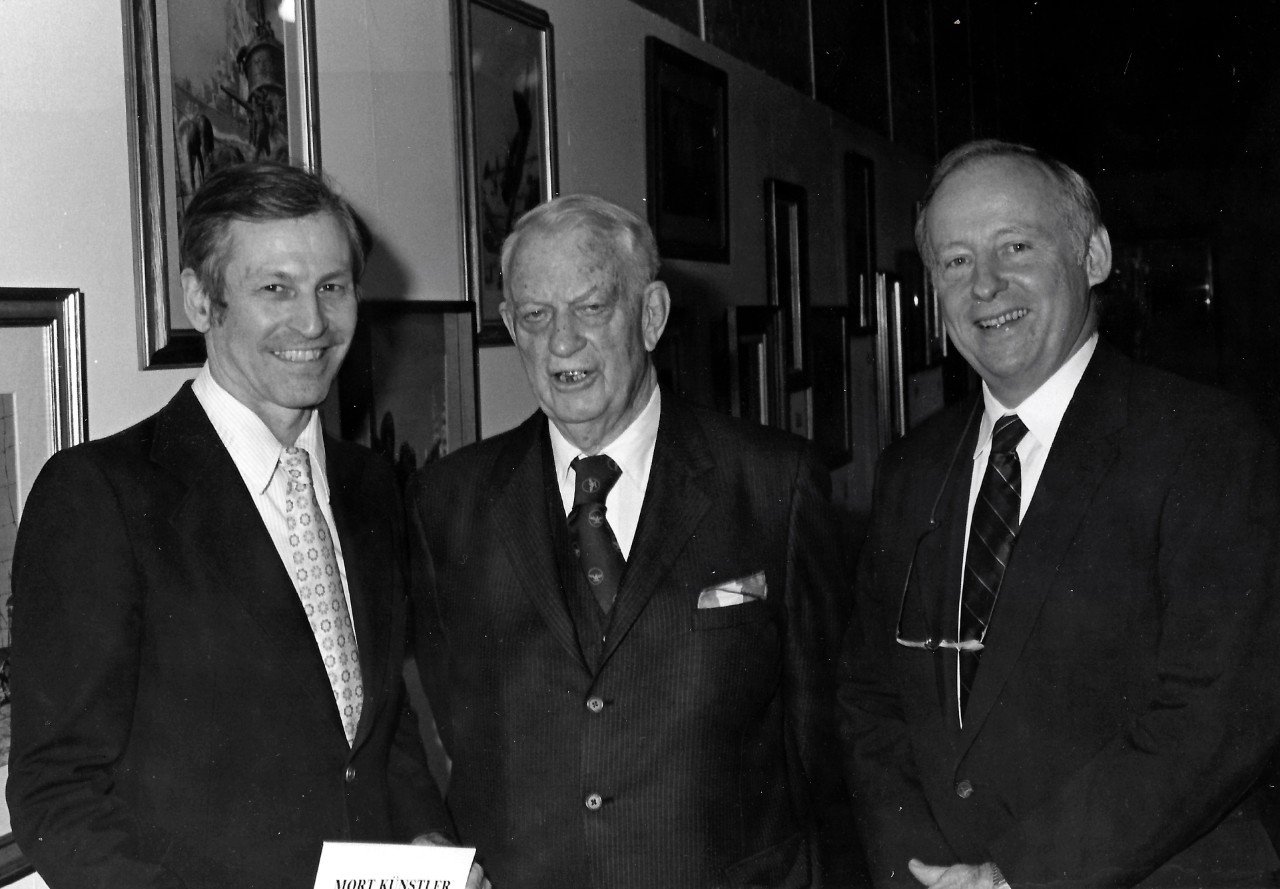 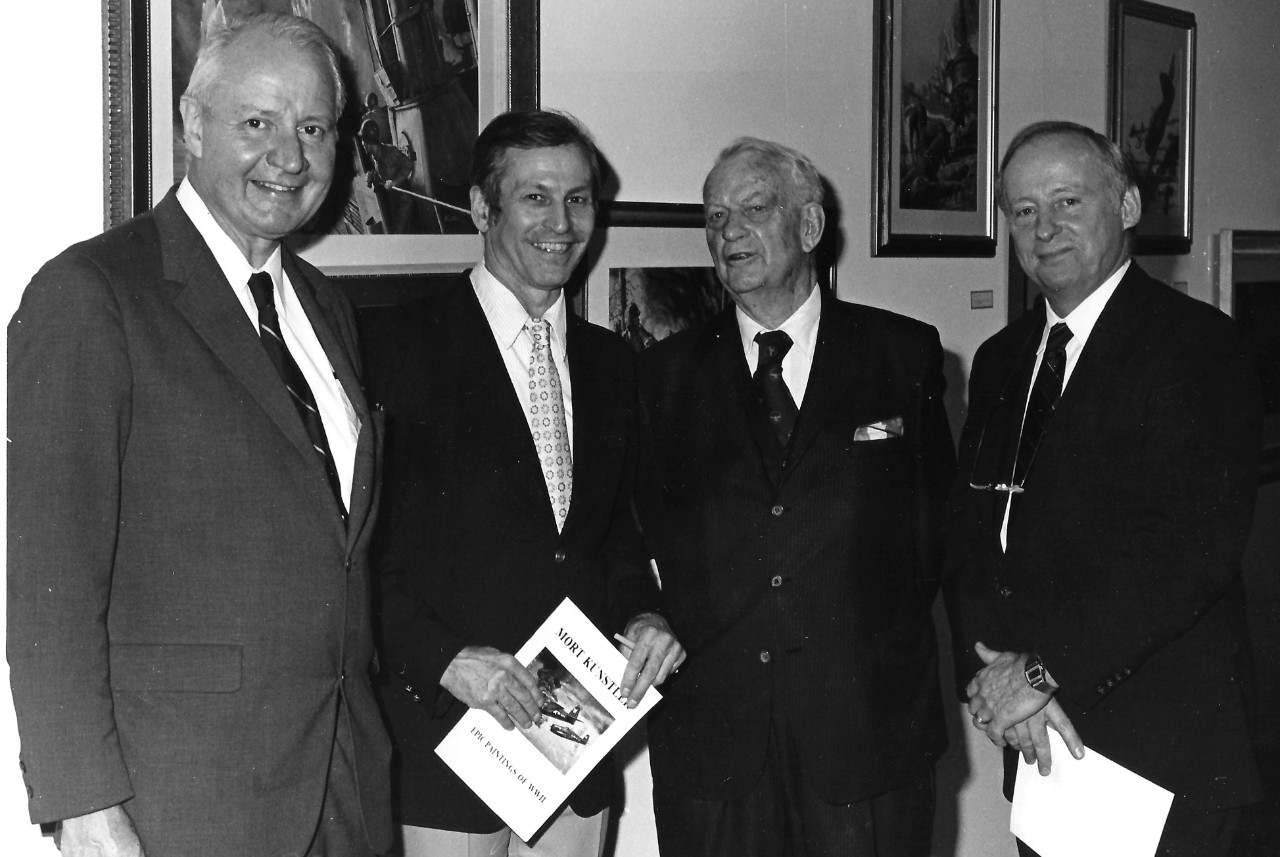 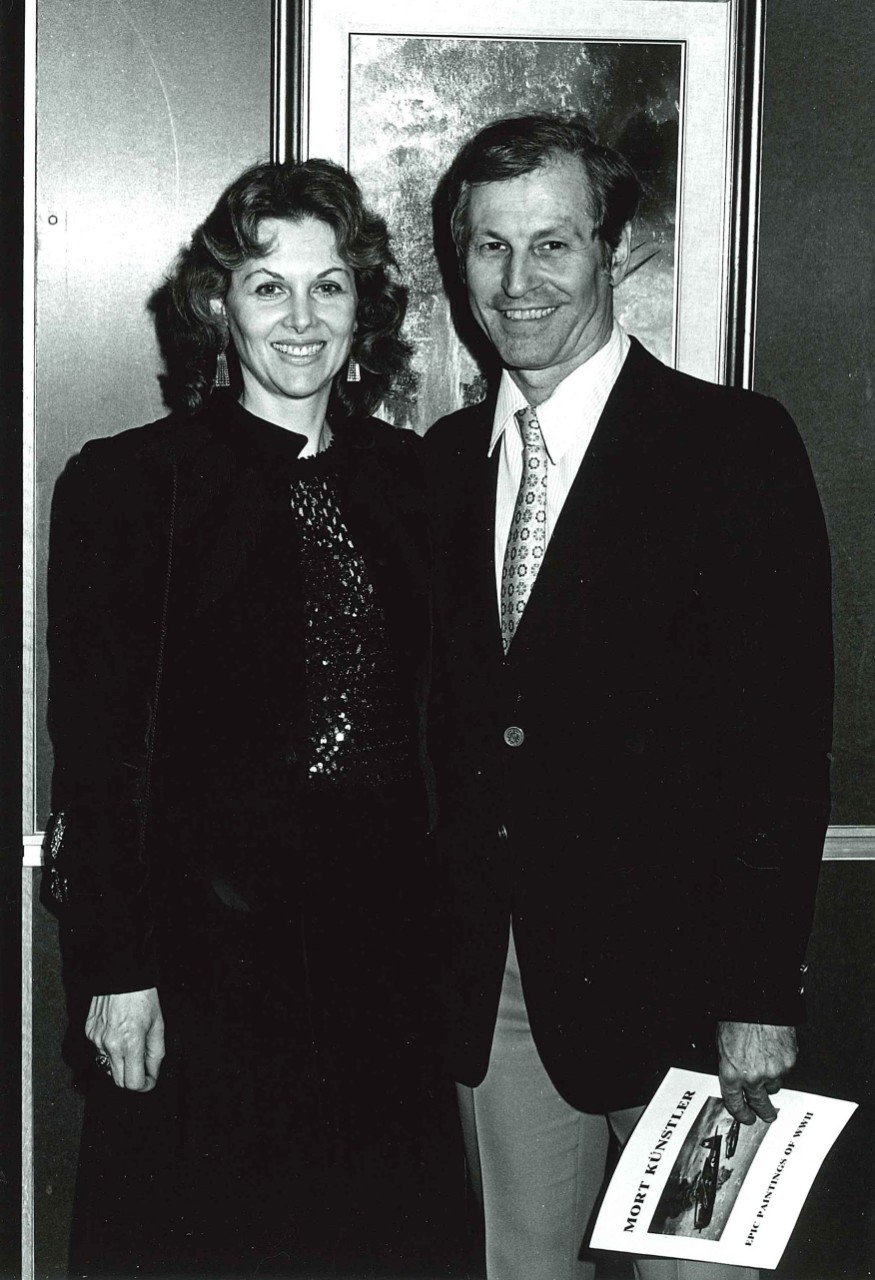 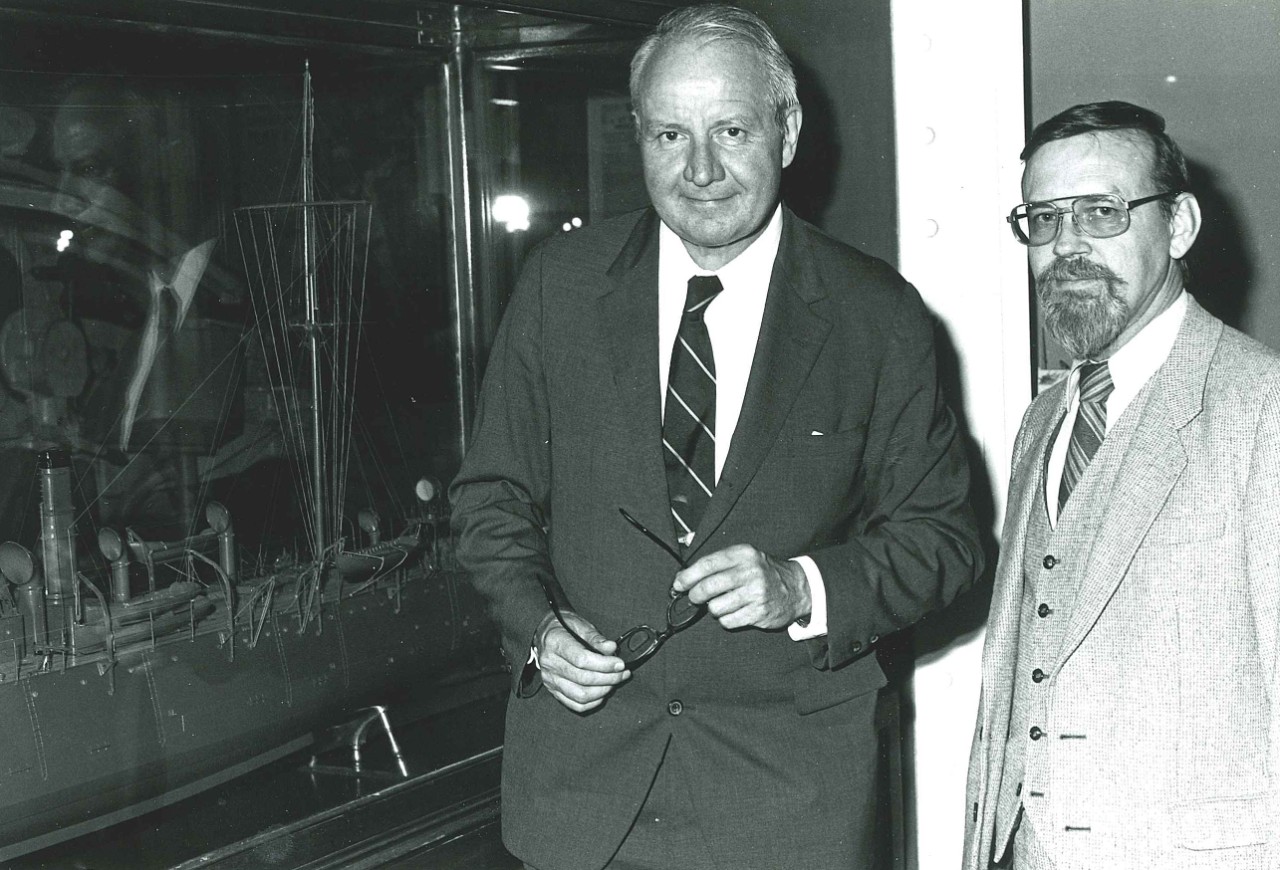 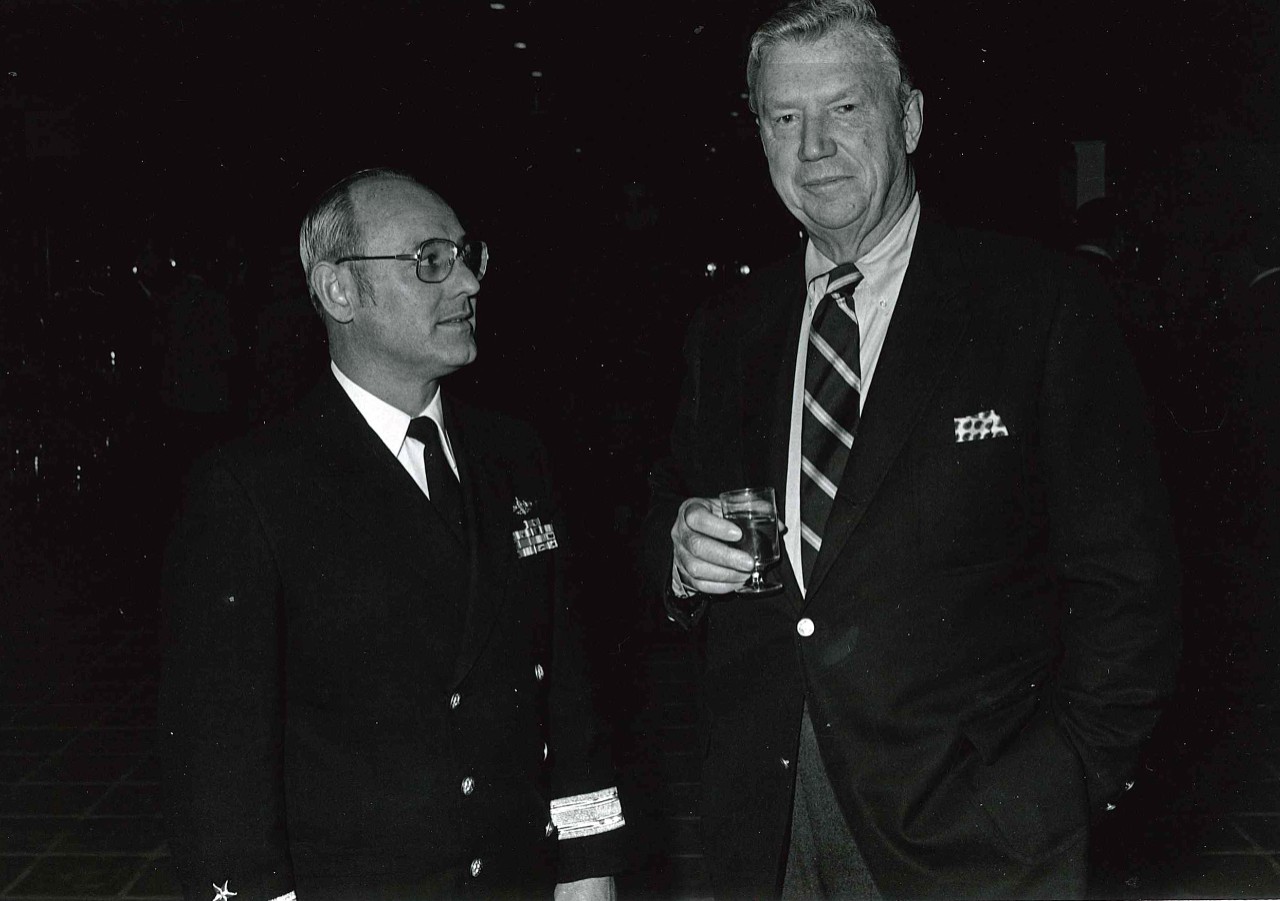 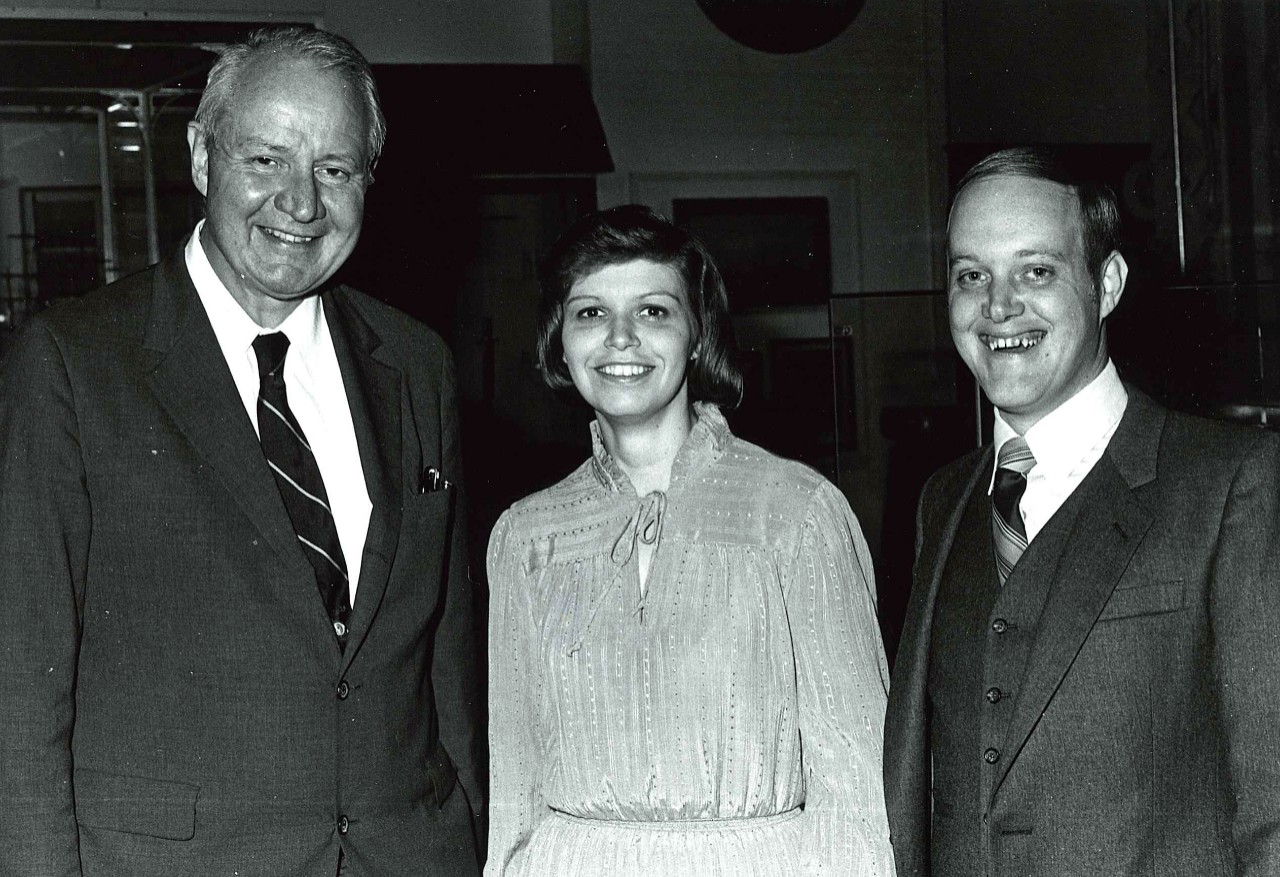 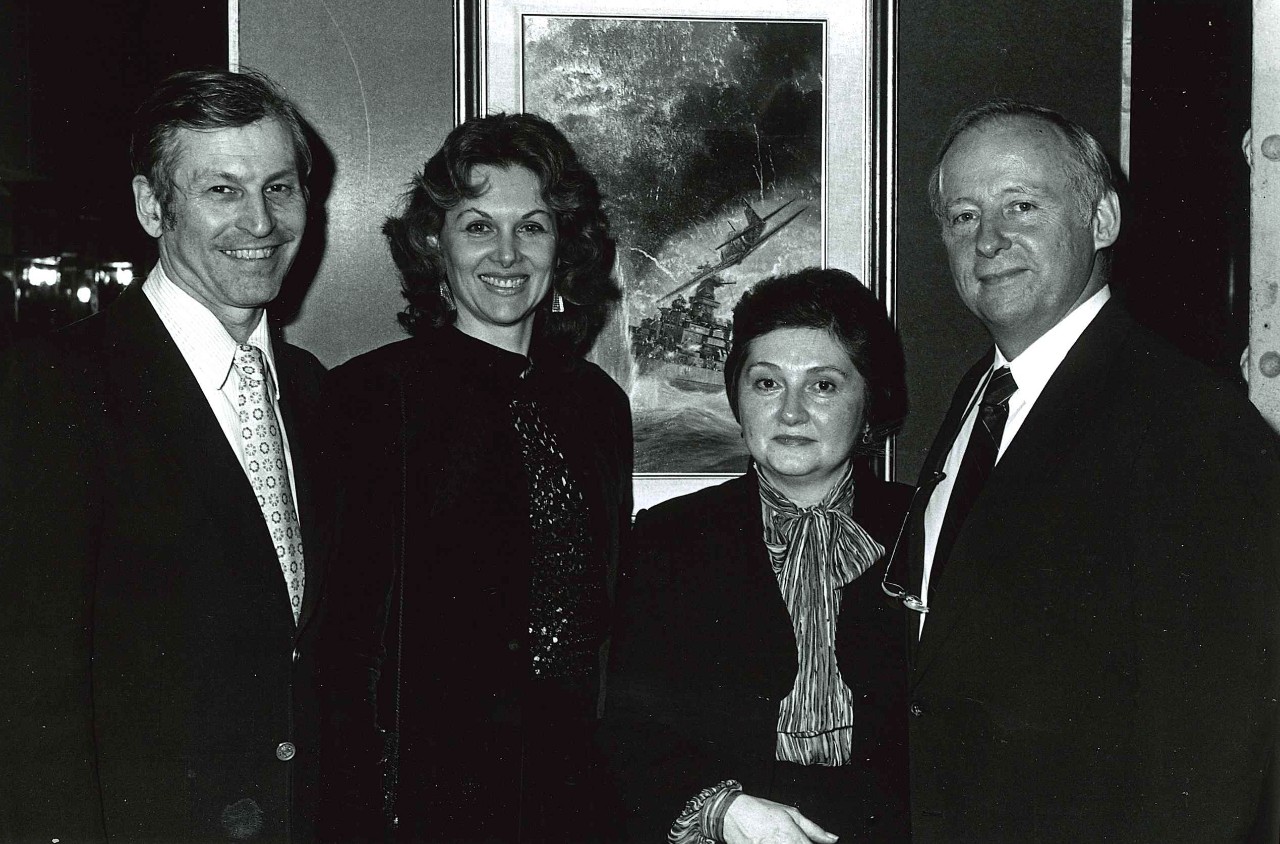 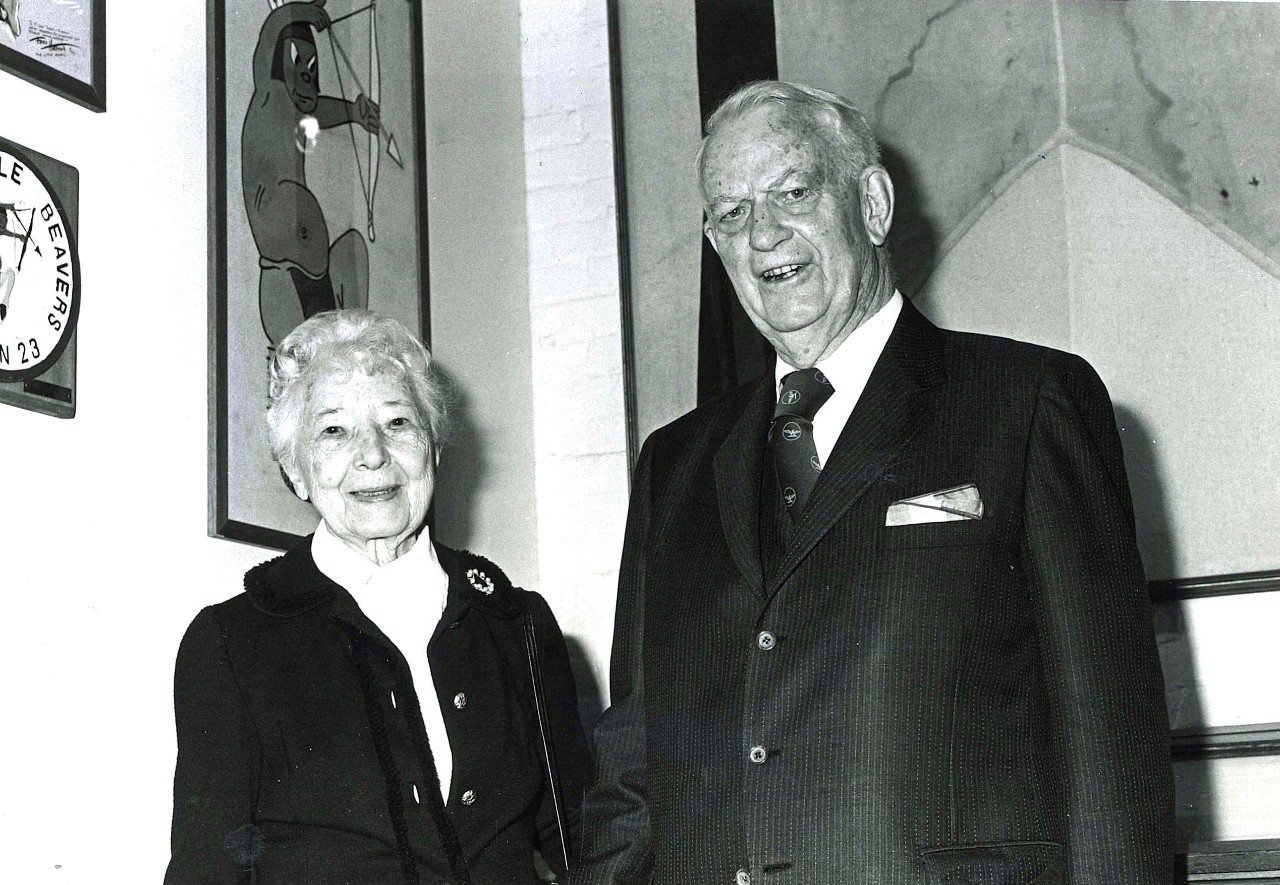 NMUSN-4406:  Mort Kunstler Art Exhibit, 1982.   Admiral Arleigh A. Burke, USN, (Retired) with his wife at the opening of the exhibit.    Admiral Burke and wife are in the Little Beavers (DESRON 23) display area in the World War II:  Pacific Theatre area.   National Museum of the U.S. Navy Photograph Collection.