Causes of the War

The economic problems faced by the United States were an important factor in the events leading up to the War of 1812. The British impressment of American sailors hindered American trade. A variety of French and British decrees controlling trade only served to bring the US and Britain closer to war. In response to the disastrous Chesapeake Affair, the Embargo of 1807 was put into effect to safeguard the lives of American sailors and to inflict economic hardship on the European superpowers. The embargo failed to hurt the British or the French, but significantly damaged the US economy.

How did Britain and France hurt American trade?

In 1806, Napoleon Bonaparte issued the Berlin Decree, which prohibited any French, allied, or neutral nations from trading with Britain. In retaliation, the British issued a similar decree called the Orders in Council of 1807. This prevented Great Britain, her allies, and neutral nations from trading with France. It also made provisions to blockade the ports of the French and their allies and required that all neutral trade going to Europe had to come through British ports first and pay British tariffs. Napoleon, in reprisal, issued the Milan Decree, which asserted that all neutral nations using British ports or paying British tariffs were in fact British and therefore subject to seizure.

We behold our seafaring citizens still the daily victims of lawless violence, committed on the great common and highway of nations, even within sight of the country which owes them protection.

-President James Madison, War Message to Congress (June 1, 1812) on the impressment of American sailors by the British. 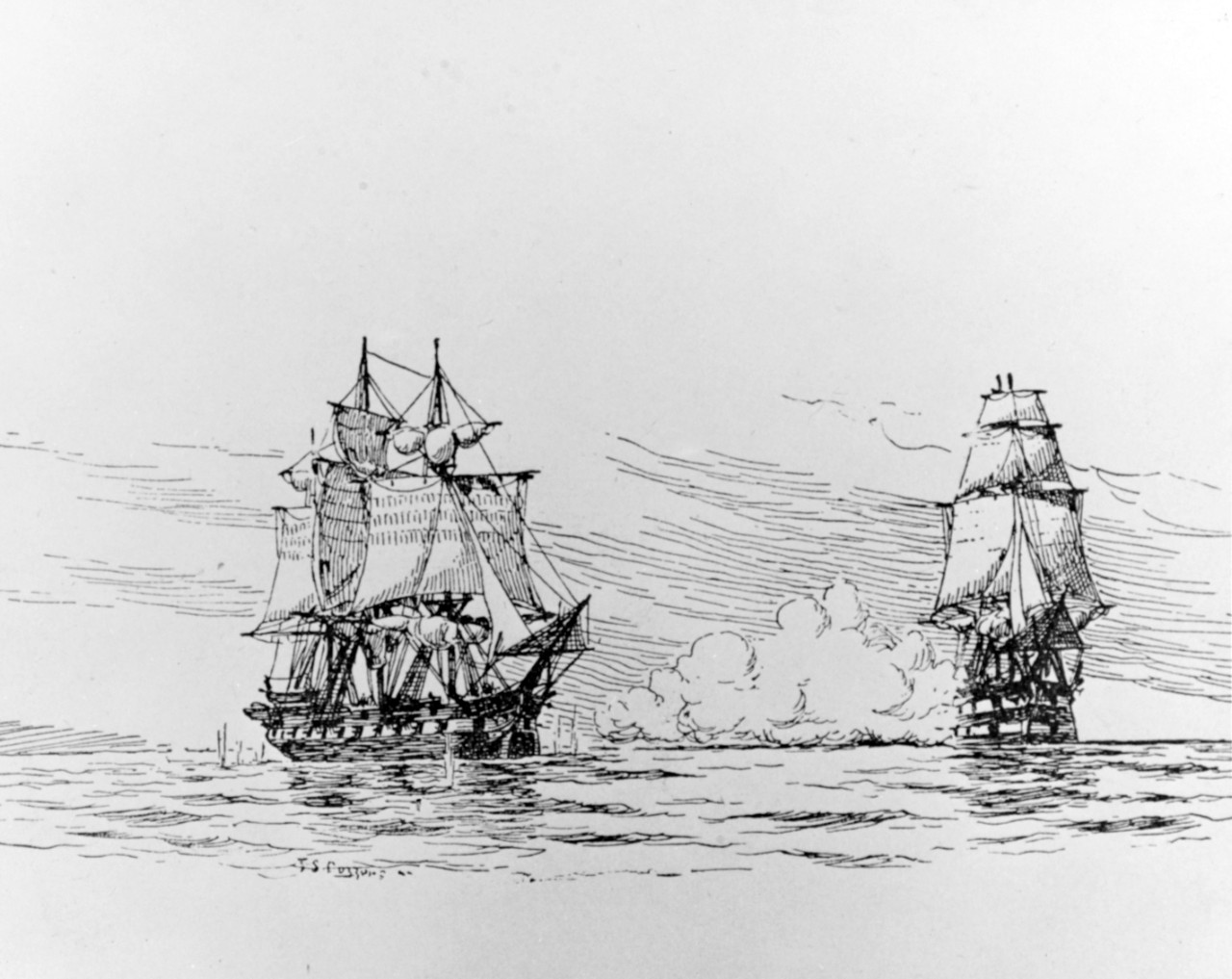 This image depicts the American frigate Chesapeake and the British frigate Leopard. Four American sailors were impressed by the British, which shocked the American public. This event inspired President Thomas Jefferson to propose the Embargo Act of 1807 and spawned much animosity towards the British, and towards Jefferson’s party in the port cities and towns.

Presented to Lieutenant William H. Allen for upholding the honor of his country, this silver dirk was bought by the frigate’s officers to show their appreciation. Allen was the only American to get off a shot at HMS Leopard after it had opened fire. Commodore James Barron quickly surrendered the American frigate and allowed the British to seize four deserters. Allen was successful in having Barron court-martialed, and gained appreciation by the ship’s officers. The inscription reads: “Given to Lt. William H. Allen as a token of esteem for his courage & endurance in the action on June 22nd 1807 by the officers of the USS Chesapeake.

This artifact is on display in The Forgotten Wars of the 19th Century exhibit area in Bldg. 76. 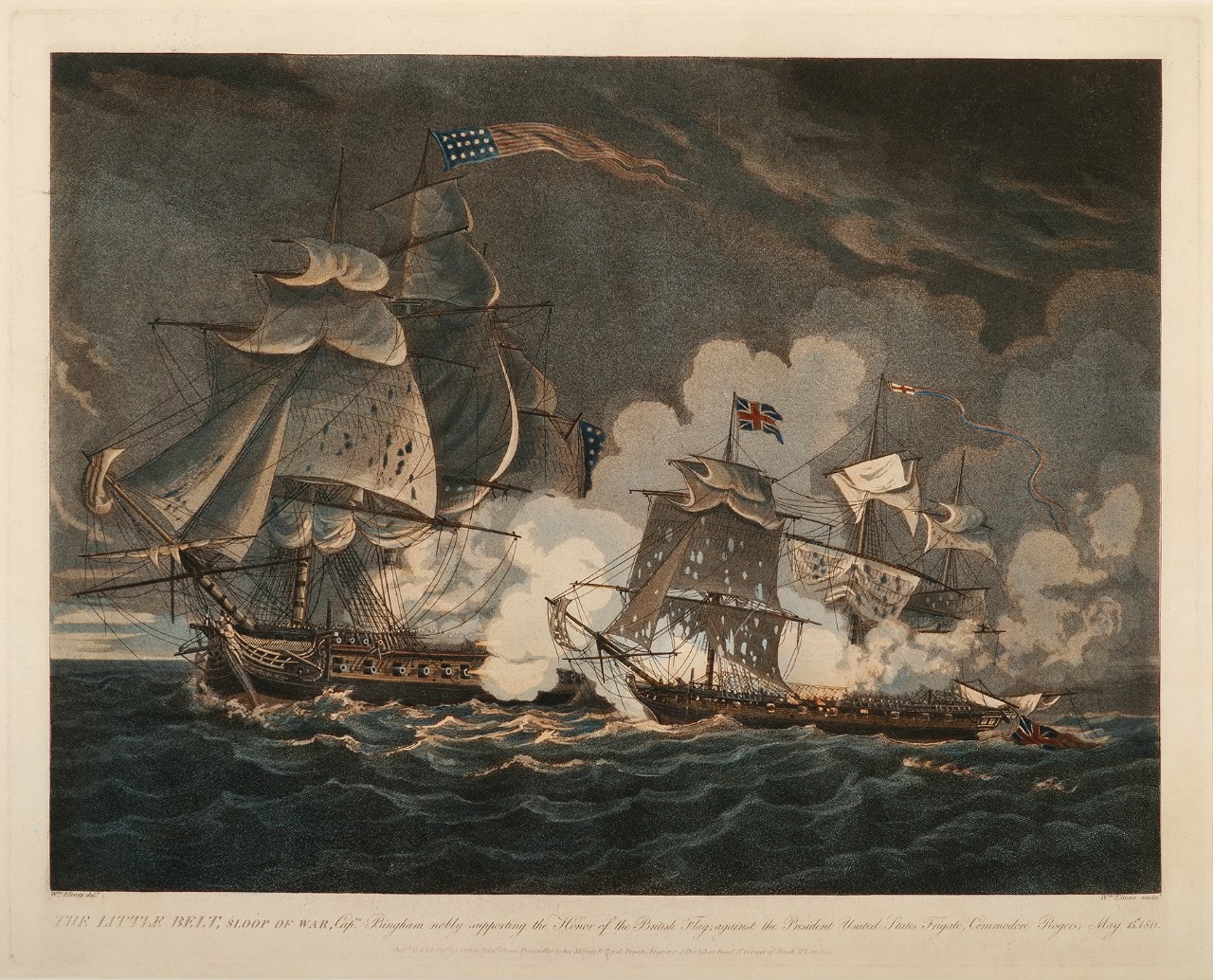 The Little Belt Sloop of War, Captain Bingham Nobly Supporting the Honor of the British Flag Against the President United States Frigate, Commodore Rodgers, May 15th 1811, 2015-050-020.

On May 16,  1811, the frigate USS President met the much smaller British sloop HMS Little Belt. The Americans fired into the British, inflicting serious damage. The action resulted in several British deaths. Both sides claimed that the other had started the conflict, and heightened tensions between the two nations. 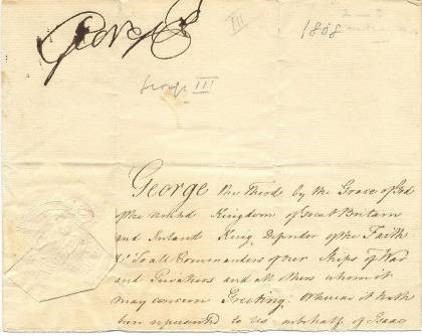 From 1803 to 1807, the British seized 528 American flag ships for failing to comply with British regulations. This license, signed by King George III, was intended to protect the United States merchant ship Fame from being added to that number. 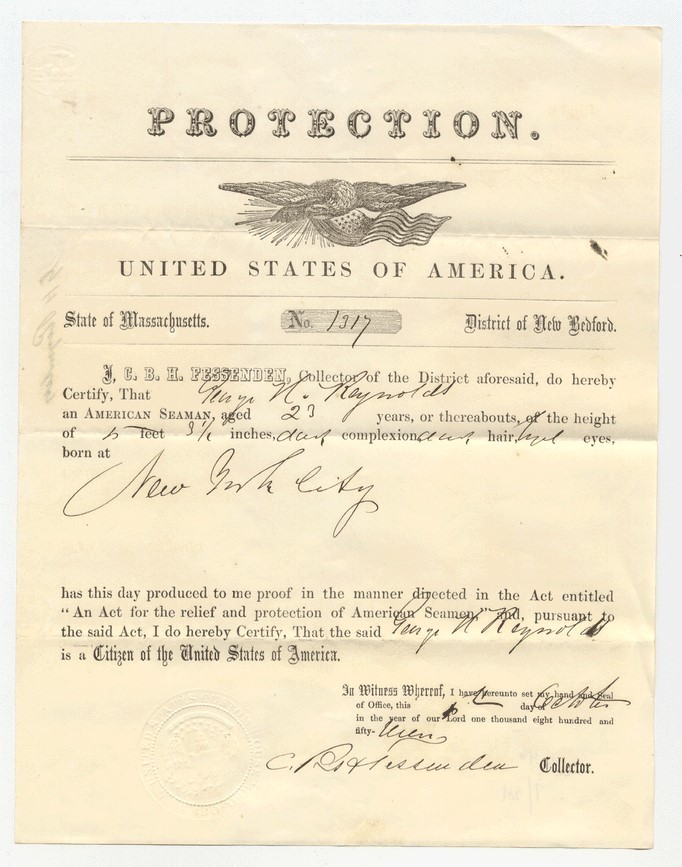 In order to prevent British ships from impressing American sailors, papers such as these were issued in order to prove American citizenship. In some cases, though, British officers deemed these papers insufficient evidence and seized the men. 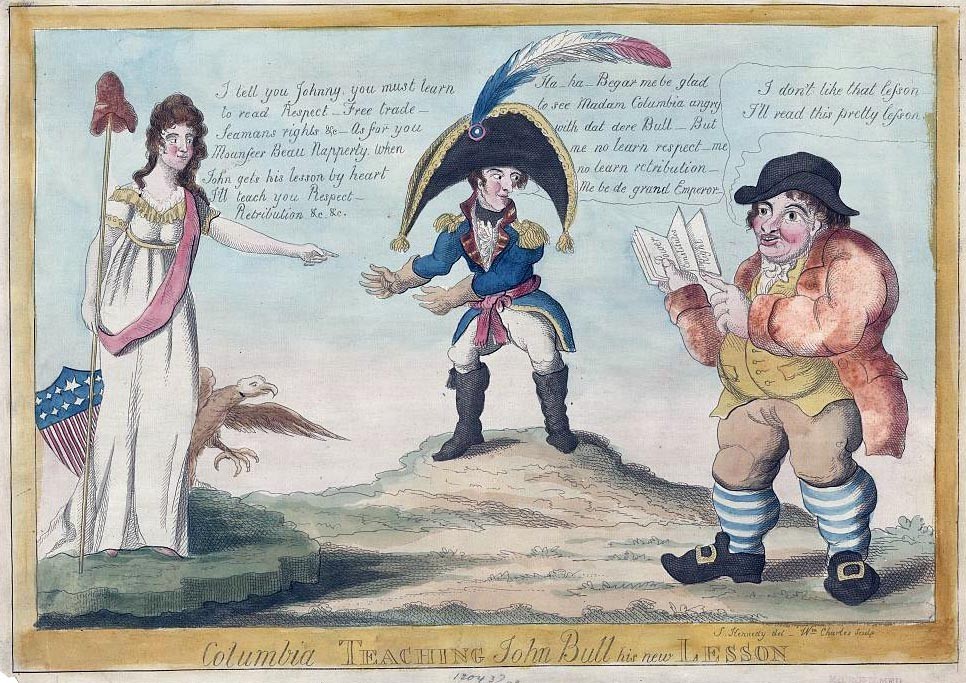 This 1813 cartoon by Scottish-born William Charles shows John Bull, a representation of England, being taught a lesson in respect and retribution from Columbia, the symbol of America. Napoleon, as Mounseer Beau Napperty, rejects being taught any lesson and is pleased with the growing animosity between Columbia and John Bull. 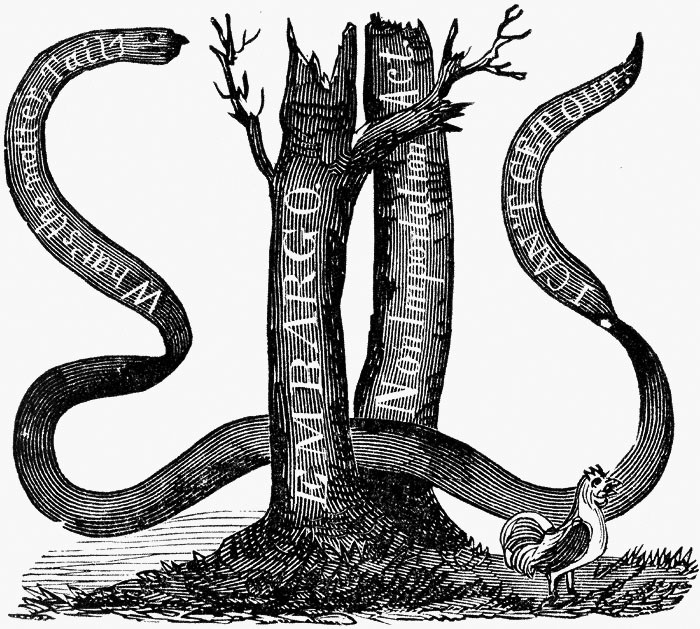 Embargo and Non-Importation Act.   Courtesy of the Library of Congress, LC-USZ62-64402.

Here, the snake represents trade and the two tree trunks are the restrictive laws that prevent it from functioning. The dialogue between the head and tail, “What’s the matter tail?—I can’t get out”, illustrate the negative effects of the Embargo and the Non-Importation Act on the American economy.

In the months and weeks leading up to the War of 1812, Madison and his cabinet hastily planned for war against the British. For the past few years, national unity had been shaky, due to the embargo and relations with Britain and France. With war on the horizon, a pro-war group came onto the scene.

The ‘War Hawks’, led by Speaker of the House Henry Clay, were mostly Republicans from a younger generation who had not experienced the Revolutionary War era and therefore viewed going to war in a much more lightly than their older counterparts in congress. They also contended with the Federalist Party, the members of which were concentrated in the New England states. This region was heavily reliant on maritime trade. A naval war seemed to them worse than the current situation of impressment. It would destabilize trade even further and increase already existing hardships.

Whether the United States shall continue passive under these progressive usurpations and these accumulating wrongs, or, opposing force to force in defense of their national rights, shall commit a just cause into the hangs of the Almighty Disposer of Events, avoiding all connections which might entangle it in the contest or views of other powers, and preserving a constant readiness to concur in an honorable reestablishment of peace and friendship…

The final step ought to be taken ; and that step is WAR.

But under the present circumstances, there will be…no chance for success, no hope of national glory, no prospect but of a war against Britain, in aid of the common enemy of the human race; and in the end an inglorious peace…

Committee of Boston Citizens Against the War (1812). 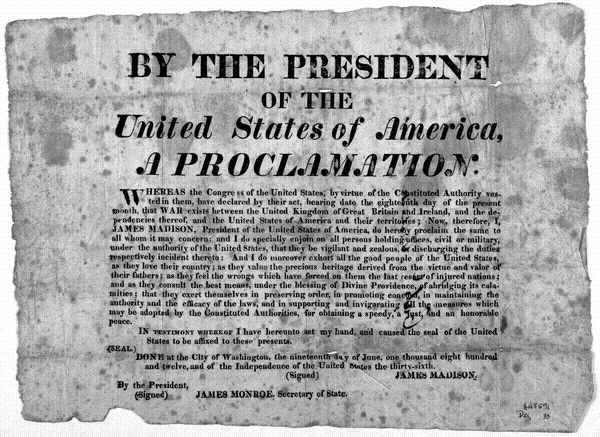 Broadsides similar to this one were posted in towns and cities throughout the United States after Congress declared war on Great Britain. In it, President Madison reminds all Americans of their revolutionary heritage and of the wrongs done to them by the British and calls upon the civil and military authorities of the United States to do their duty with zeal and determination, and on citizens to respect the law. 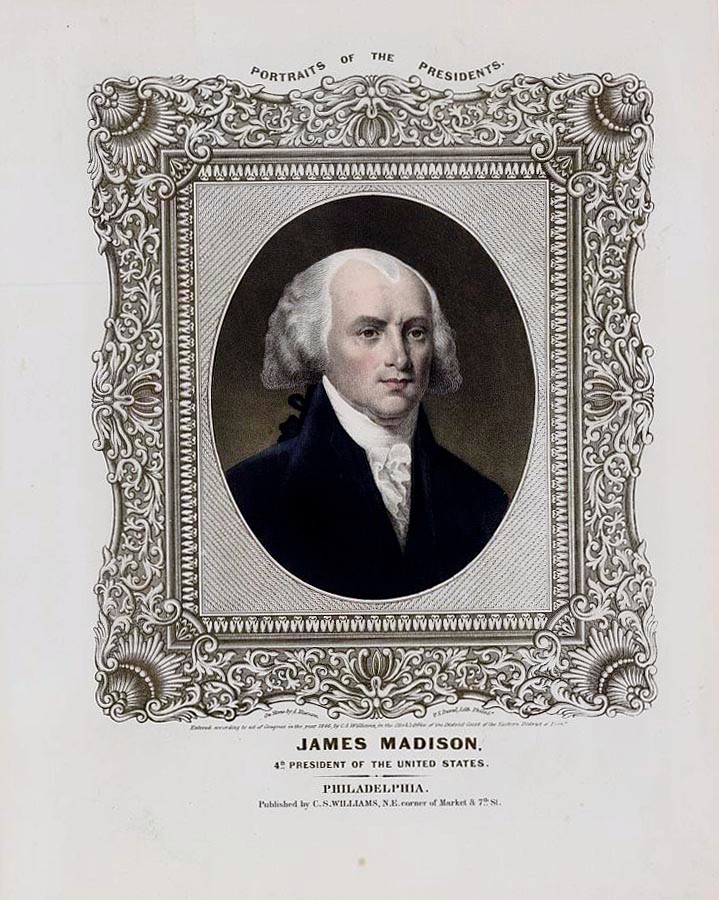 In the fall of 1811, Congress and the President debated about going to war with the United Kingdom. With any diplomatic efforts unsuccessful, the resolution for war was signed on June 18, 1812. 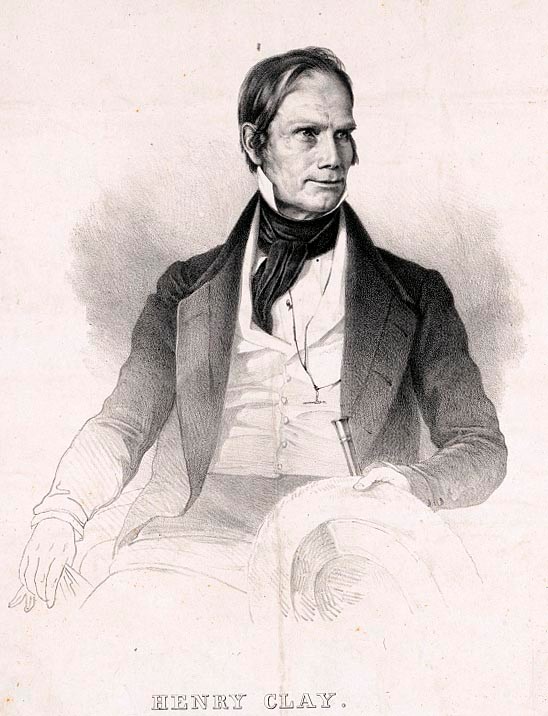 Enthusiastic leader of the “War Hawks”, Clay was very much for war with England, making a speech in 1812 saying that “Our cause is just; and if we are decided and firm, success is inevitable.”

The Western Frontier and Canada territories

The early 1800’s was an important time in American history for expansion. In 1803, Thomas Jefferson acquired the Louisiana Purchase and lands west of the Mississippi opened up for Americans. This urge to expand has sometimes been applied to the United States’ attempt to conquer Canada. Some believe that it was an extension of Manifest Destiny. That is, Americans only desired Canadian land. However, there are those who point out that the rich natural resources of the British colony would be valuable to the United States as a bargaining chip in later negotiations. Others draw attention to the fact that Americans had plenty of land to expand into and did not require or desire expansion into Canada.

More substantially there was a desire to end Native American aggression along the western frontier. This problem was only heightened by the presence of the British in the north. Conquering Canada would prevent the British from allying with or otherwise aiding the Indians who prevented settlers from moving west.

They [the British] seduced the greater part of the tribes within our neighborhood, to take up the hatchet against us, and the cruel massacres they have committed on the women and children on our frontiers taken by surprise, will oblige us now to pursue them to extermination, or drive them to new seats beyond our reach… 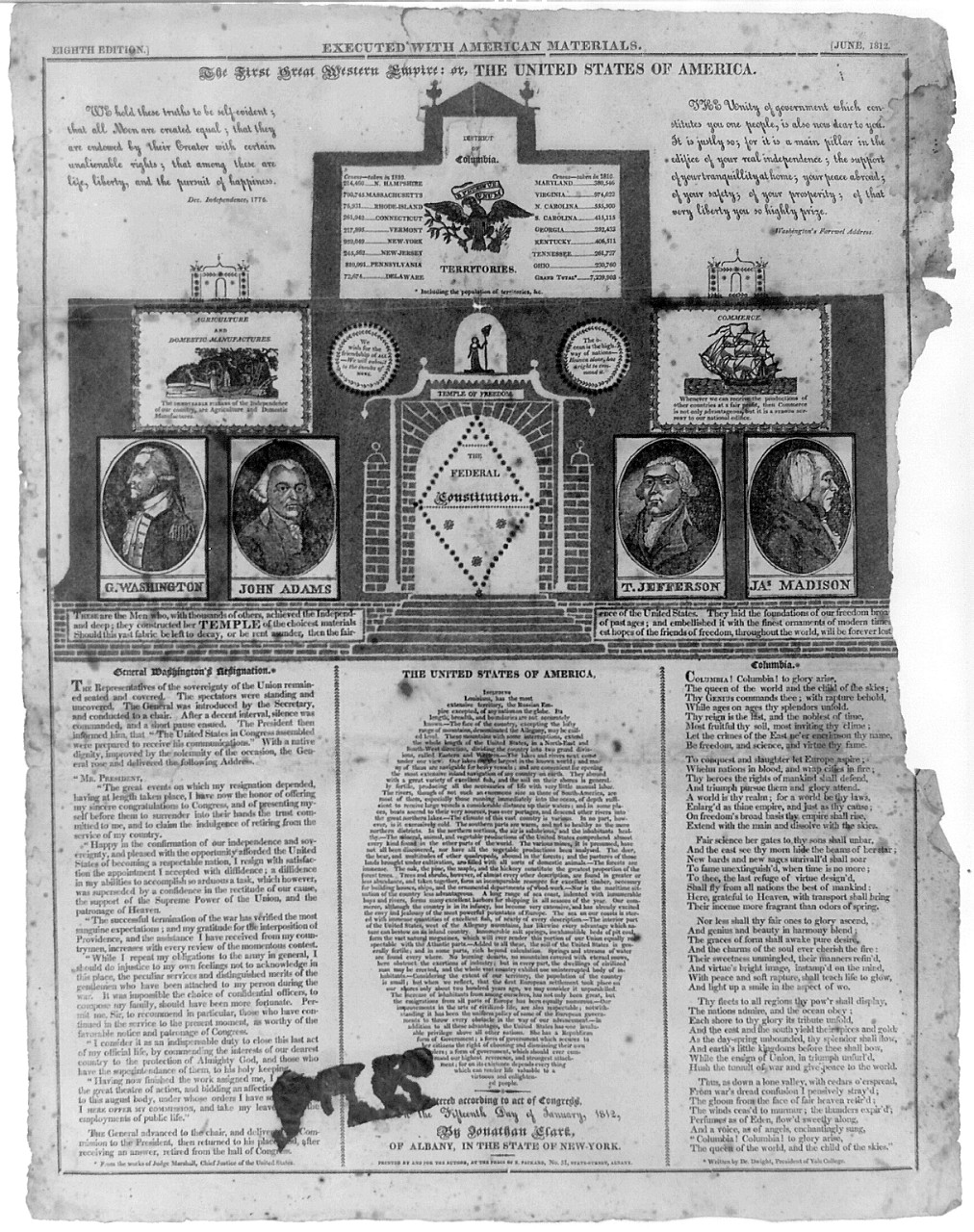 The First Great Western Empire or the United States of America.   Courtesy of the Library of Congress, LC-USZ62-40915.

This patriotic broadside is illustrated with emblems of the United States, composed chiefly of typographic elements. It acts as a showcase of American power, history, and politics 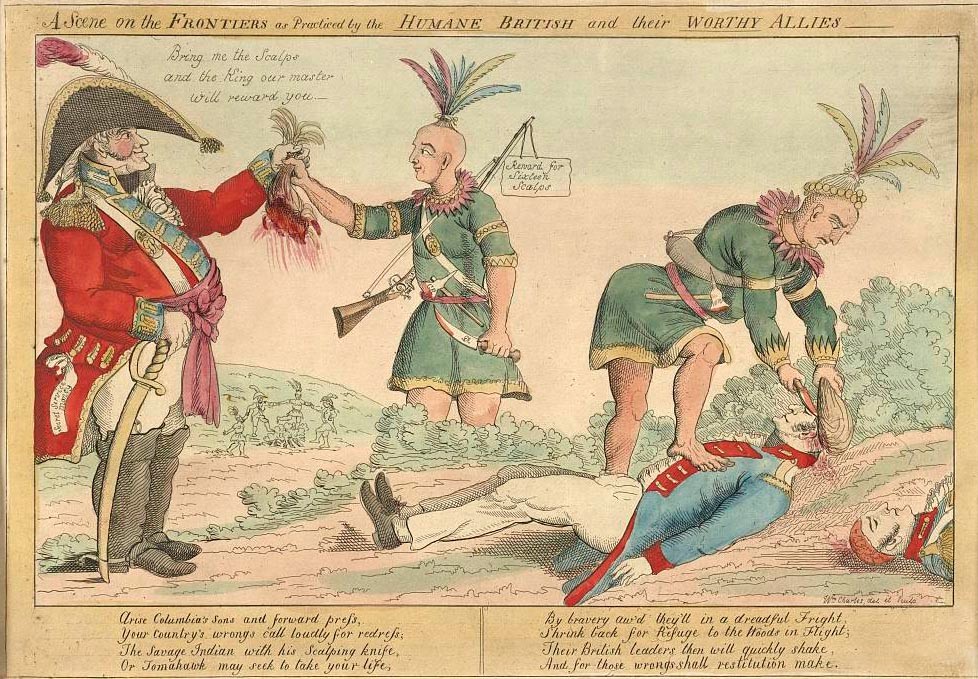 A Scene on the Frontiers as practiced by the humane British and their worthy Allies.   Courtesy of the Library of Congress, LC-USZC4-4820.

This political cartoon, by William Charles, shows the alleged atrocities committed by the British. John Bull is seen buying the scalps of Americans from Natives after a massacre. It was produced at the beginning of the war to stir up pro-war sentiments.

At the start of the war, the United States was still a young country. This was evident when the British began to hinder upon American free trade. How to deal with this intrusion would be a key factor in what kind of nation the United States would be. National pride became an important factor in shaping the country. Those who had lived through the Revolution did want to see the country fall victim to the kind of oppression they had dealt with for so long. Faced with a return to British rule and an end of diplomacy, war was a great risk, but a risk that needed to be taken.

The great question, on which the Unites States have to decide, is, whether they will relinquish the ground which they now hold, or maintain it with the firmness and vigor becoming freemen. 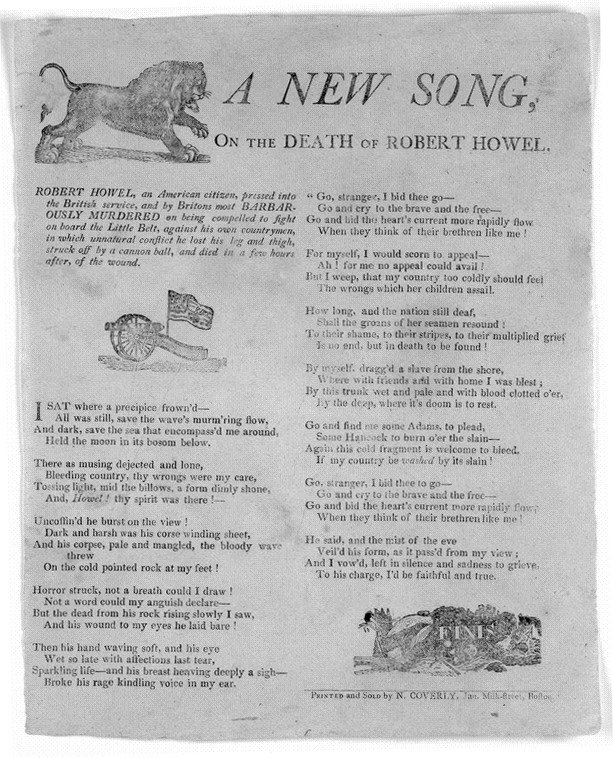 A New Song on the Death of Robert Howel, printed and sold by N. Coverly, Boston, 1811.  Courtesy of the Library of Congress, Portfolio 49, Folder 14.

No matter what his vocation, whether he seeks subsistence amidst the dangers of the deep, or draws it from the bowels of the earth, or from the humblest occupations of mechanic life, whenever the sacred rights of an American freeman are assailed, all hearts ought to unite and every arm should be braced to vindicate his cause.