The birth of the United States Navy in the early days of the American Revolution drew heavily on the practice, customs, and traditions of the Royal Navy. From that day onward, and through two great world wars, bonds of mutual respect and admiration have been forged between English speaking seamen the world over. May the “Nelson Touch” never be lost to us. This exhibit was a salute to the Royal Navy and the partnership with the U.S. Navy. 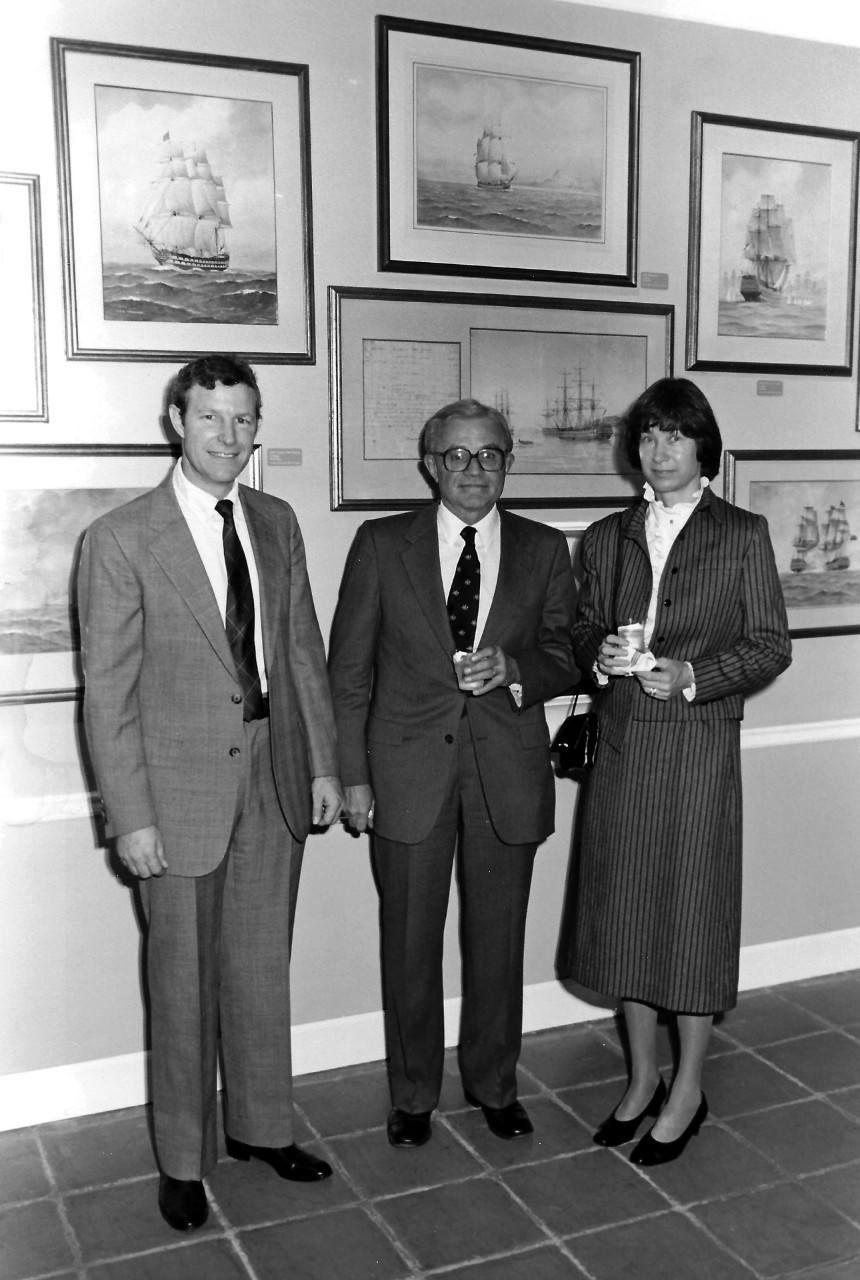 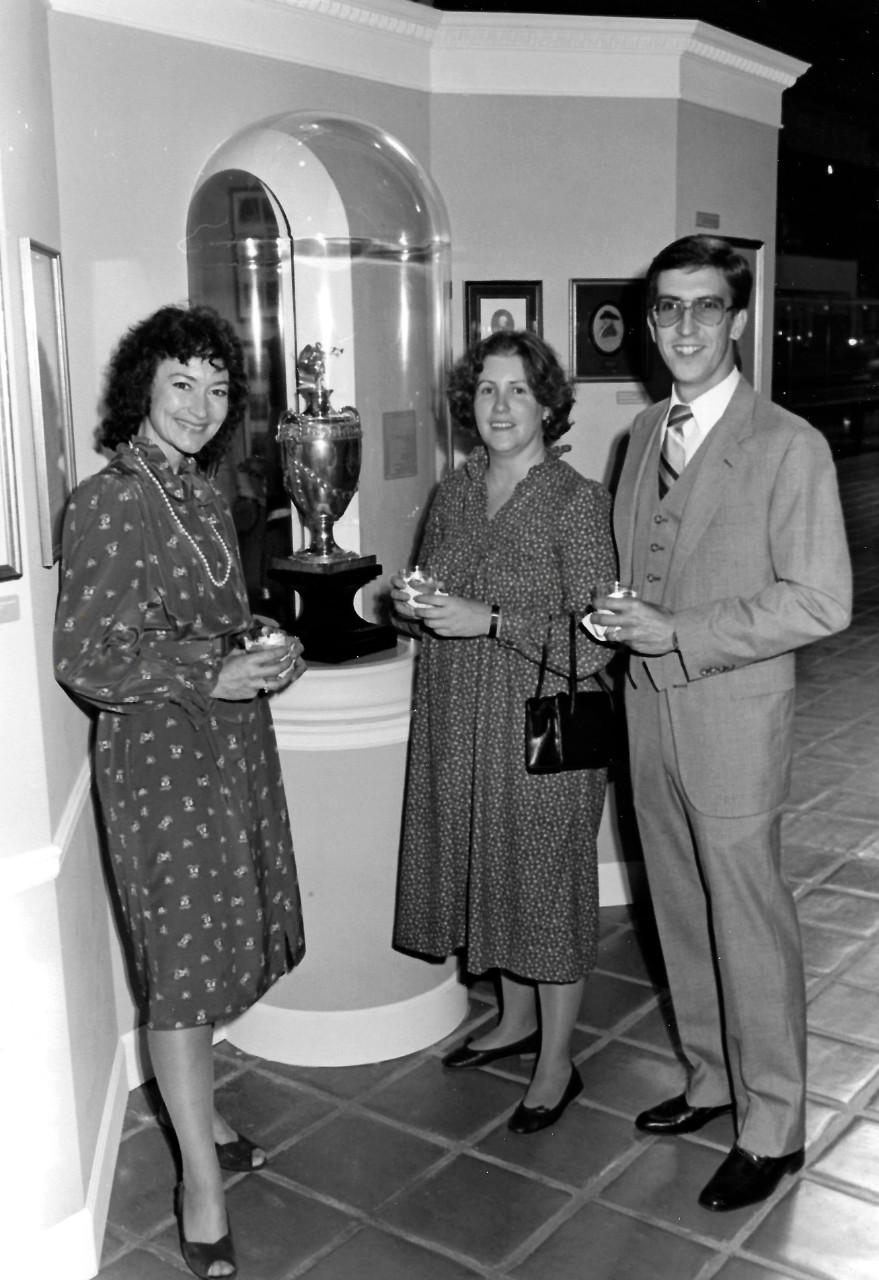 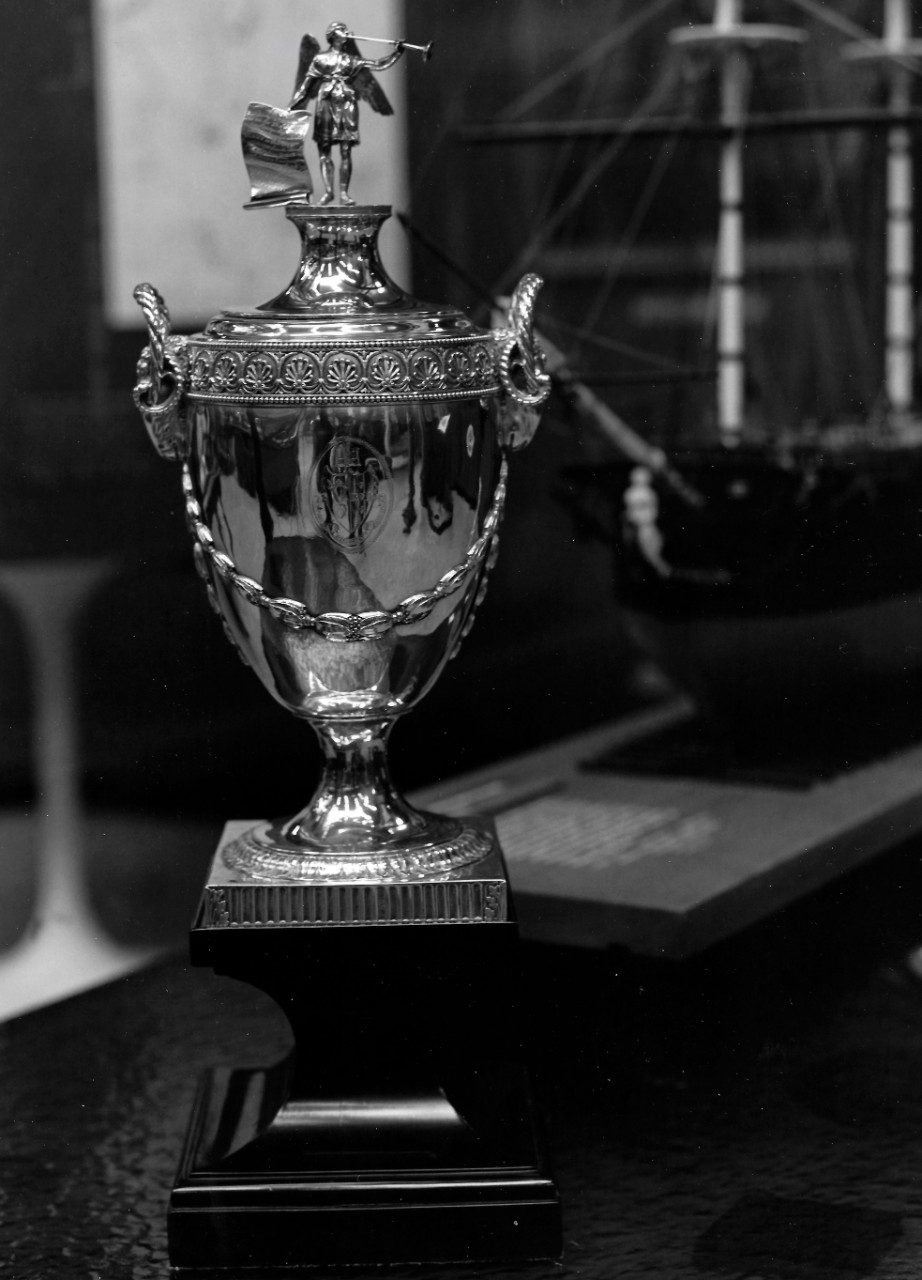 Pearson’s Cup. The Russia Company presented the cup to Captain Sir Richard Pearson in 1780 for his gallant efforts to save 41 ships carrying naval supplies. The cup is inscribed: “To Captain Pearson Knt. Who on the 23 of Sept. 1779 in his Majesty’s ship Serapis, protected a numerous & attack of a Superior force. The Russia Company, presents this vase, as a testimony of their Sense of Bravery & Conduct, on that occasion.” Courtesy of Captain and Mrs. Paul Hammond.” National Museum of the U.S. Navy Photograph Collection, NMUSN-Photo-7.

This artifact is currently on display in the American Revolution exhibit area at the National Museum of the U.S. Navy, Bldg. 76.

The sextant, a navigational instrument, developed from the octant which was invented by John Hadley about 1731. The main difference between the two was the arc one-sixth of a circle for the sextant and one-eighth of a circle for an octant. The modern sextants have telescopic sights, but are otherwise relatively unchanged from this example made by Spencer, Browning, and Rust in London at the end of the 18th Century.

This sextant made in Bristol in 1780 belonged to Captain Samuel Tucker, who distinguished his career during the American Revolution as captain of Boston. In 1788, he carried John Adams, the recently appointed Commissioner, to France. 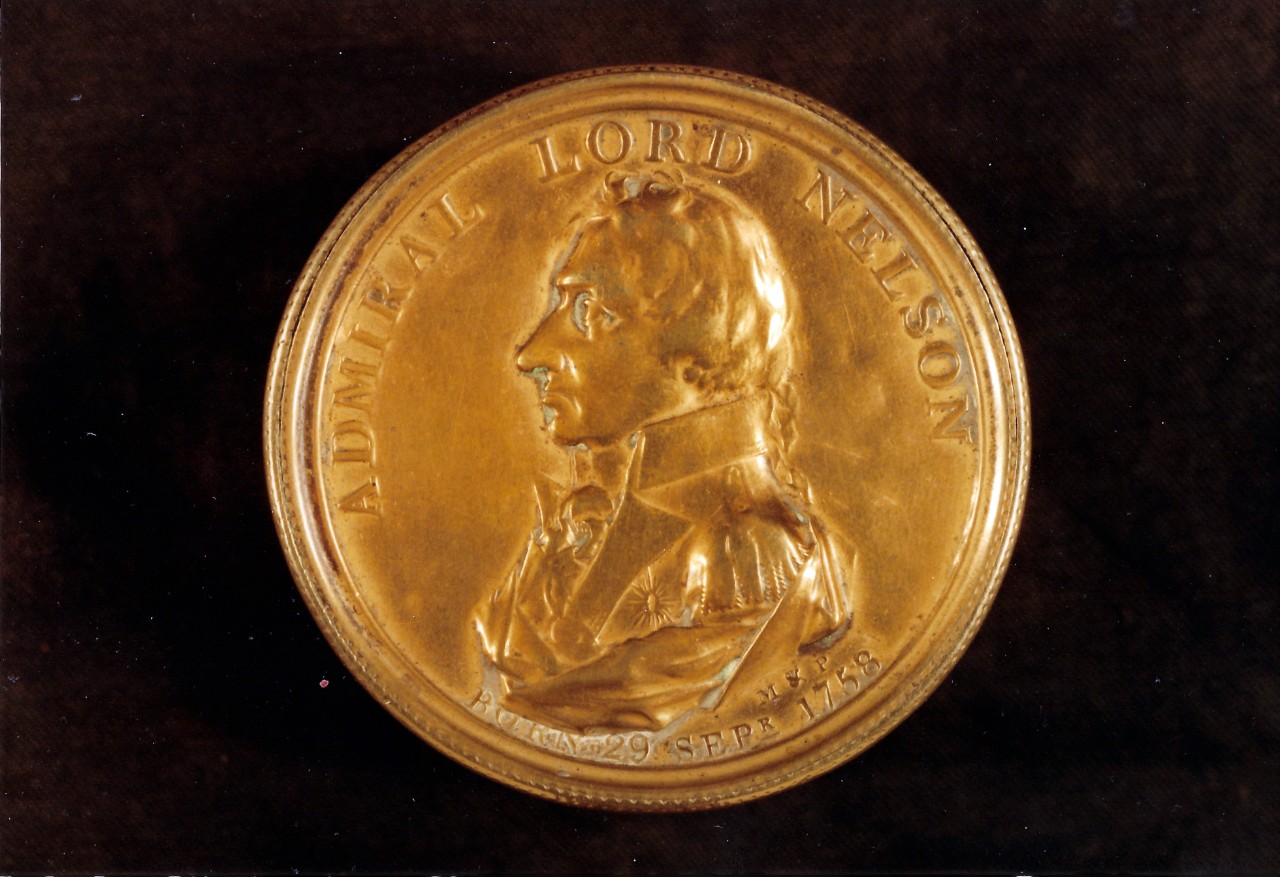 The Death of Nelson at the Battle of Trafalgar, engraving from original painting by Daniel Maclise, 1876. The original is I the palace of Westminster. 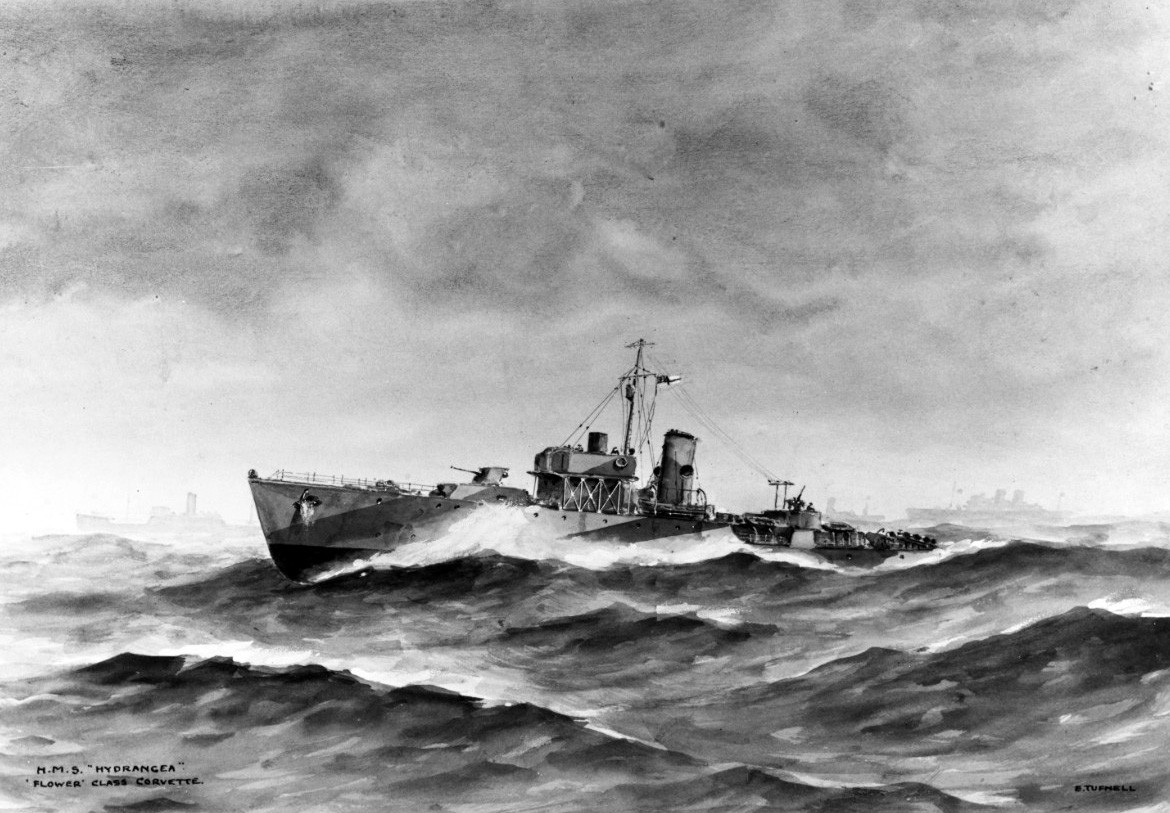 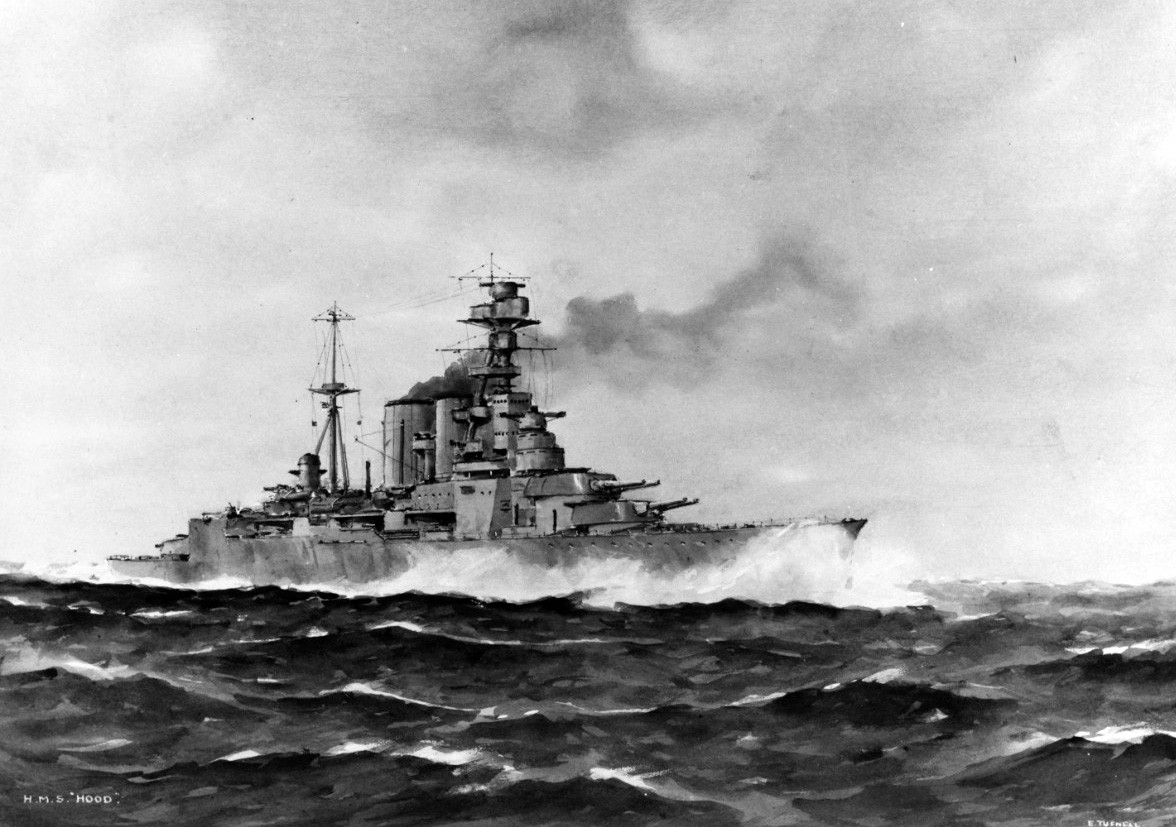 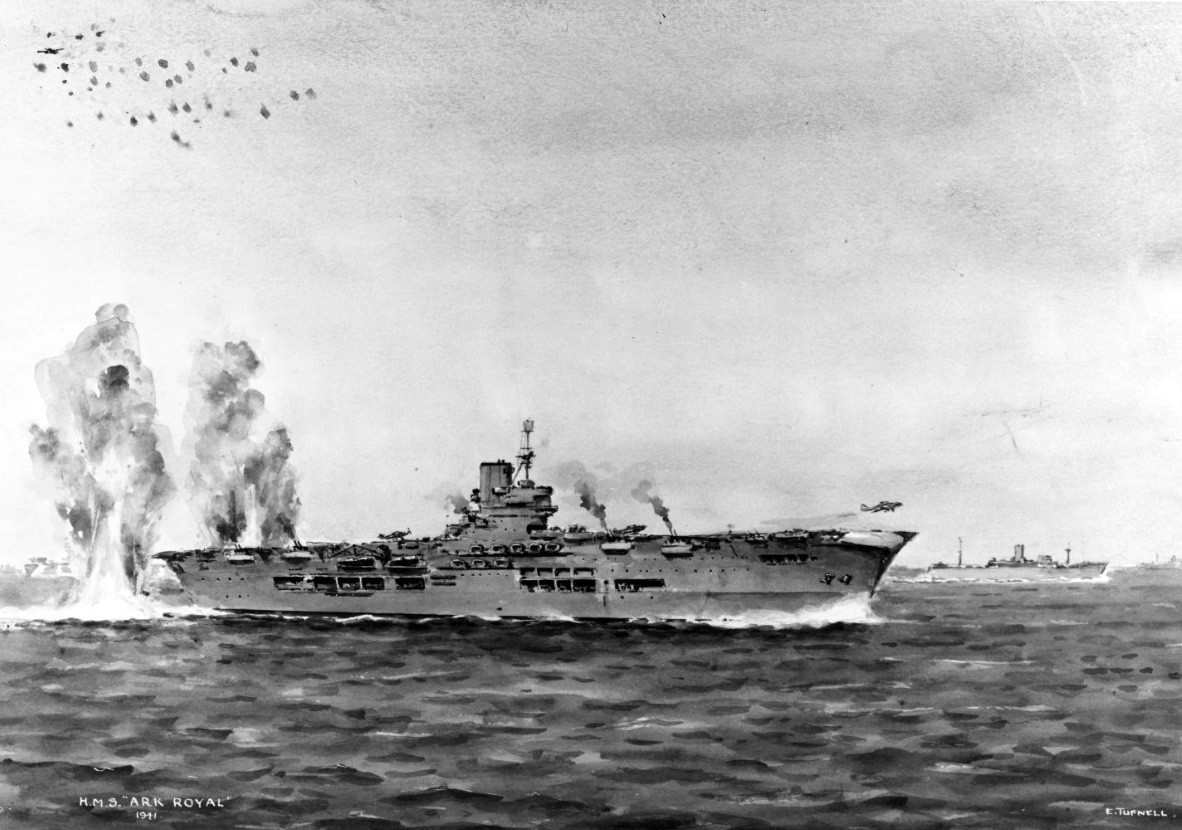 Rum was first introduced in 1655 on the West Indies Station as an alternative to beer which spoiled quickly. By the early 18th century the ration was half a pint a day, an amount which anesthetized the senses and had a disastrous effect on health. In 1740, Admiral Edward Vernon ordered the rum watered down as “a remedy for the swinish vice of drunkenness” The mixture of a quart of water to each half pint of rum was prepared in a cask or scuttle butt in the presence of the Lieutenant of the Watch. This was the original “Grog,” deriving from the Admiral’s nickname Old Grogram, which described his coarse, silk boat cloak. In 1842 the ration was again halved, and in 1970 after more than three centuries of use in the Royal Navy, the rum ration was abolished altogether.

Following the British traditions, the American Navy issued a daily grog ration until 1862 when President Abraham Lincoln ordered the practice to cease. Liquor was still used in the officer wardrooms and captain’s mess until 1914 when Secretary of the Navy, Josephus Daniels, issued an order to ban alcoholic beverages from all ships and stations of the U.S. Navy. 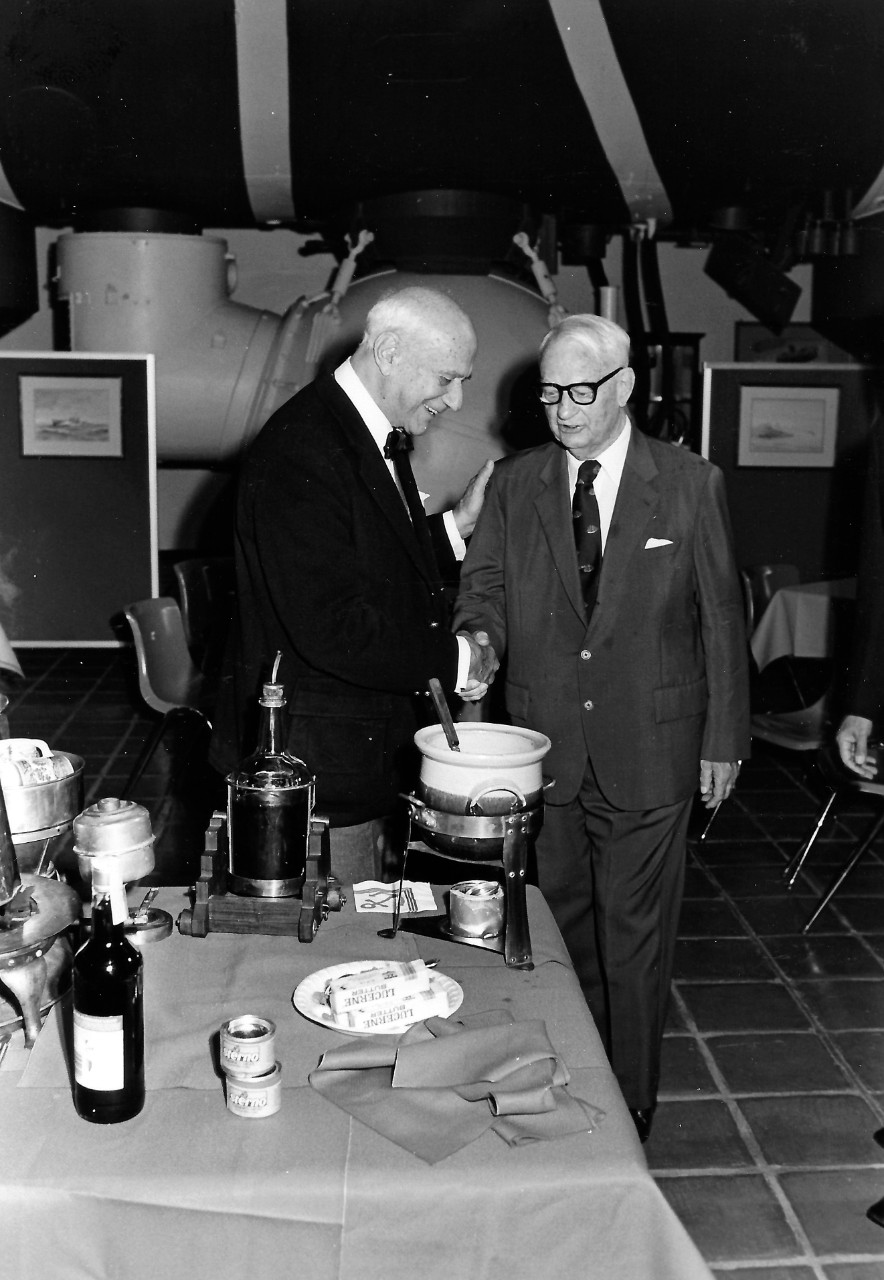 Admiral Arleigh A. Burke, USN, (Retired), right, and Admiral Jerauld Wright, USN, (Retired), at the opening of the exhibit A Special Relationship: United States Navy and United Kingdom Royal Navy held at the Navy Memorial Museum (now National Museum of the U.S. Navy), October 1984. They are discussing “Grog”, which was part of the exhibit written by Admiral Wright. Note, bathyscaph Trieste in the background. National Museum of the U.S. Navy Photograph Collection, NMUSN-Photo-1.

The Laws of the Navy.
Dedicated to his comrades in the service by the author, Rear Admiral Ronald A. Hopwood. The poem appeared originally in the Army and Navy Gazette, July 23, 1896. 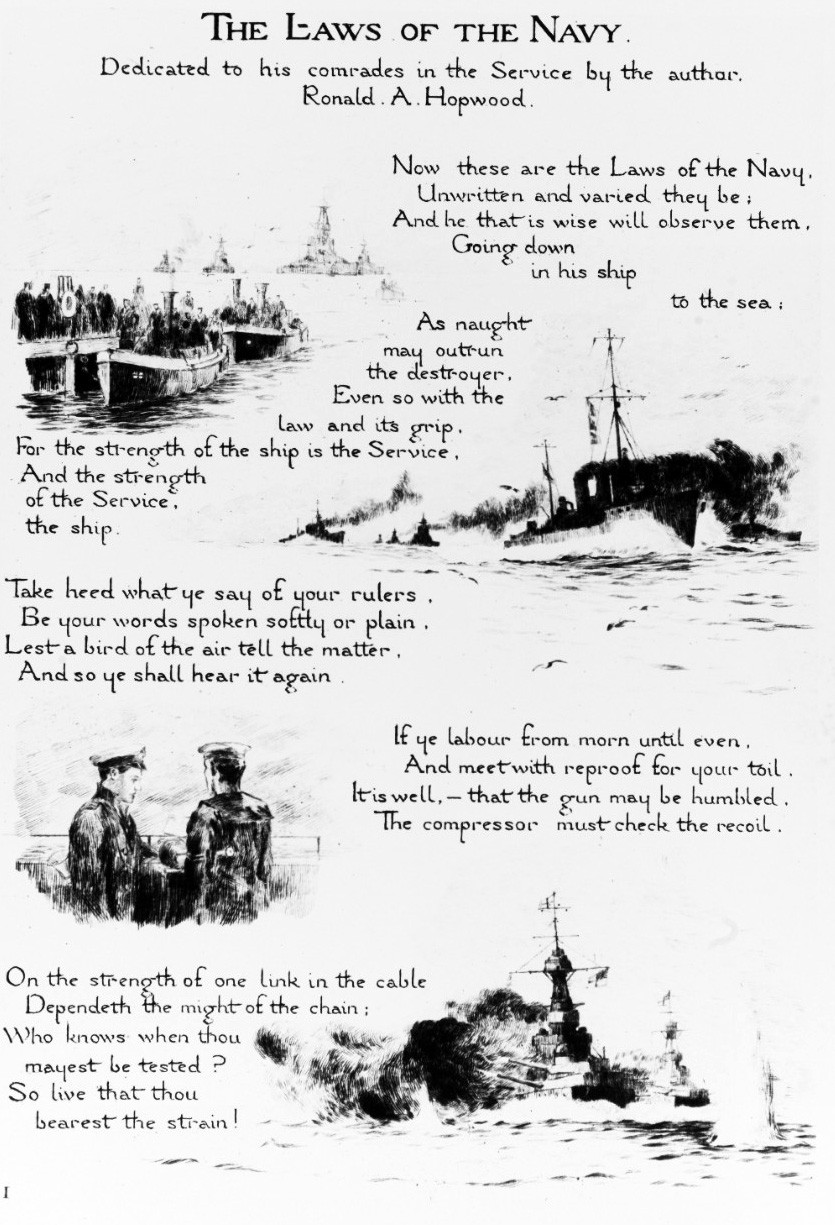 NH 41883 The Laws of the Navy Plate I (of four) of an edition of the poem by Rear Admiral Ronald A. Hopwood, C.B., Royal Navy, published by W.R. Deighton & Sons, London, England, during the World War I era. It is illustrated by etchings by Lieutenant Rowland Langmaid, R.N., depicting scenes of the contempory British Navy. The poem originally appeared in the Army and Navy Gazette, 23 July 1896. U.S. Naval History and Heritage Command

British Order of St. Michael and St. George
Presented to Captain J.R.P. Pringle, USN, for service during World War I.

The Navy List, October 1917
Published by Admiralty, it contains the unique listing of Captain J.R.P. Pringle as Chief of Staff to Vice Admiral Sir Lewis Bayly, the senior Royal Navy officer in Queenstown. The Irish port was one of the major U.S. bases from which the U.S. Navy joined the British to mount patrol and convoy and escort operations. Captain Pringle represented Admiral Sims who was the senior U.S. Naval officer in Europe during World War I. Courtesy of Rear Admiral and Mrs. J.D.H. Kane.

Letter forwarding Navy List to J.D.H. Kane
Containing the comment pertaining to the uniqueness of a U.S. naval officer, her father, being listed as Chief of Staff to a British admiral.

Seal of the Unites States Navy