The Ceiling of Another World

"For centuries, the only ocean man knew was the sun-drenched wind-tossed surface.  It was a two-dimensional element upon which he sailed his ship, on the fringes of which he built his cities.   The world beneath the waves was the nether region, inhabited by monsters too fearful to contemplate.  Nature had not seen fit to make water as clear as the atmosphere.  Man lived with the stars but the deep sea was beyond his ken." 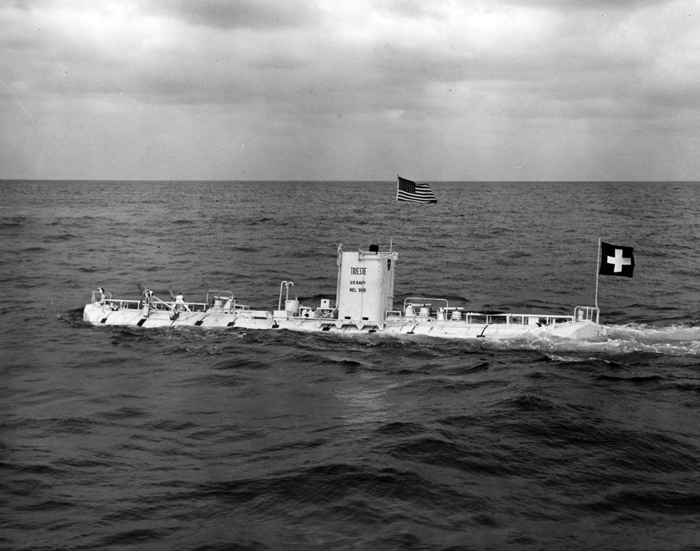 Trieste made several dives before her journey to the deepest part of the world's oceans.  The submersible's inventor, Swiss physicist and ballonist Auguste Piccard, studied and perfected the design for decades before her launch in August 1953.  Piccard's addition of pressurized, spherical gondola to the body of the submarine allowed for two people to make the descent and explore life beneath Earth's surface.

Named after the seaside Italian town where she was constructed, Trieste completed nearly 50 dives off the coast of Italy between 1953 and 1957.  During her dives in the Mediterranean Sea, Trieste's pilot Jacques Piccard spotted marine worms, clusters of deep-sea burrows on the sea floor, and sand waves, which were likely formed by underwater currents.

In 1958, the U.S. Navy acquired Trieste and transported her to San Diego, California, where a stronger observation sphere was installed.   While on the west coast, Trieste's crew conducted many Naval-sponsored experiments, including:  underwater sound testing, photography, and biological and geological studies.

Image:  NH 96798:  U.S. Navy Bathyscaph Trieste, under tow, en route to a deep water dive in the Pacific, September 15, 1959.  She is flying both the United States and Swiss flags.  U.S. Naval History and Heritage Command Photograph.