Baltimore and the Defense at Fort McHenry

Having achieved no strategic or economic objectives in the attack on Washington, the British targeted the port city of Baltimore in September 1814. Fort McHenry, guarding the water approach to the city, made a British invasion impractical. Using cannon fire and rockets, the British bombarded Fort McHenry in an attempt to destroy the fortification. Before the assault, U.S. Navy gunners sank ships at the mouth of the harbor, which kept the devastating firepower of the large British ships at a distance. Sailors from the Chesapeake Bay flotilla also operated the artillery battery along the water in defense of the fort. Despite the heavy bombardment, Fort McHenry survived. Lacking the ability to attack over land, the British withdrew. 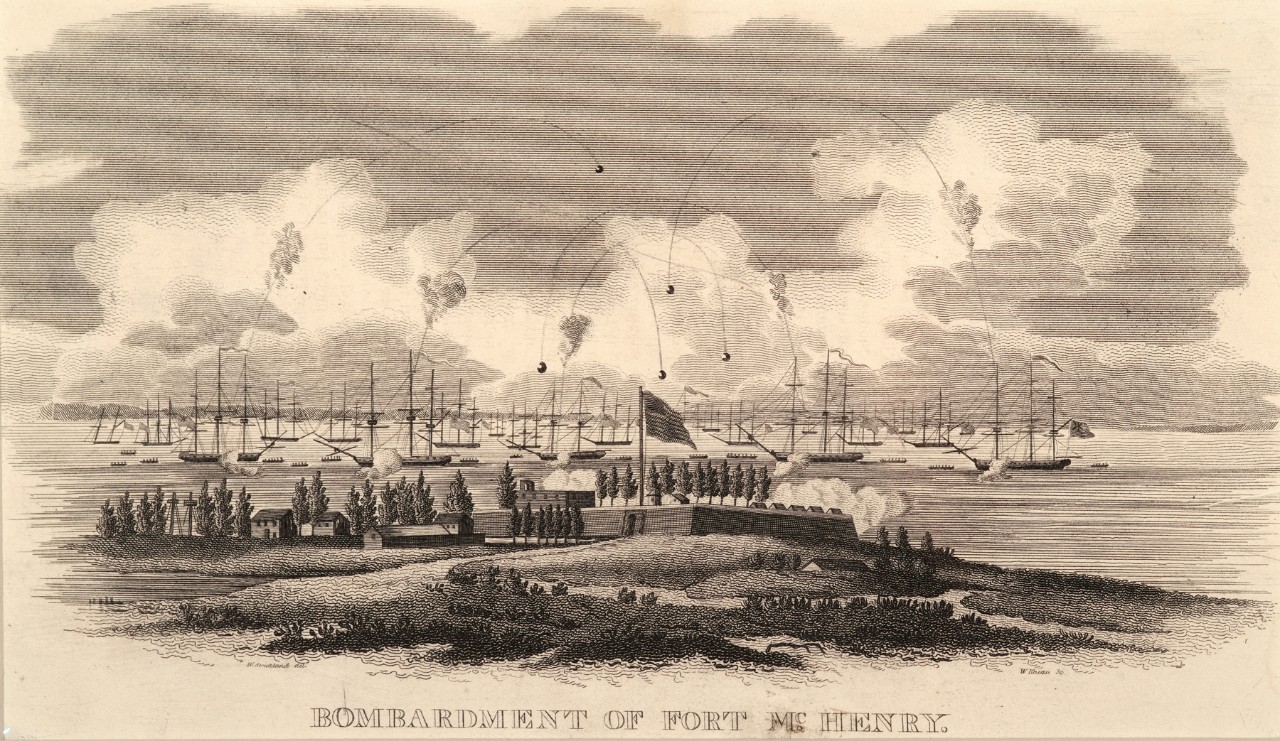 Whose broad stripes and bright stars thru the perilous fight,
O'er the ramparts we watched were so gallantly streaming?
And the rocket's red glare, the bombs bursting in air,
Gave proof through the night that our flag was still there.

Francis Scott Key, “The Star-Spangled Banner” – written as he observed the bombardment of Fort McHenry from a British ship in Baltimore Harbor.

Located in an advantageous position for both combatants, Lake Champlain became the focus of American and British naval efforts as the war progressed. Running north-south along the New York-Vermont border, control of the lake would give the victor the opportunity to advance deep into enemy territory. American control would provide the U.S. access to the St. Lawrence River, and British control would split the country and isolate the New England states, driving a wedge into the heart of the United States. The region’s isolated nature forced the United States to build a fleet, much like they had at Lake Erie.

I expect it must have escaped your notice, that there are two gun boats, belonging to the United States, upon Lake Champlain…which circumstance is and has been for some time very mortifying to…those that feel & know their exposed situation to our enemy.

Benjamin Moore, a concerned resident of Plattsburgh, New York, to Secretary of the Navy Paul Hamilton. 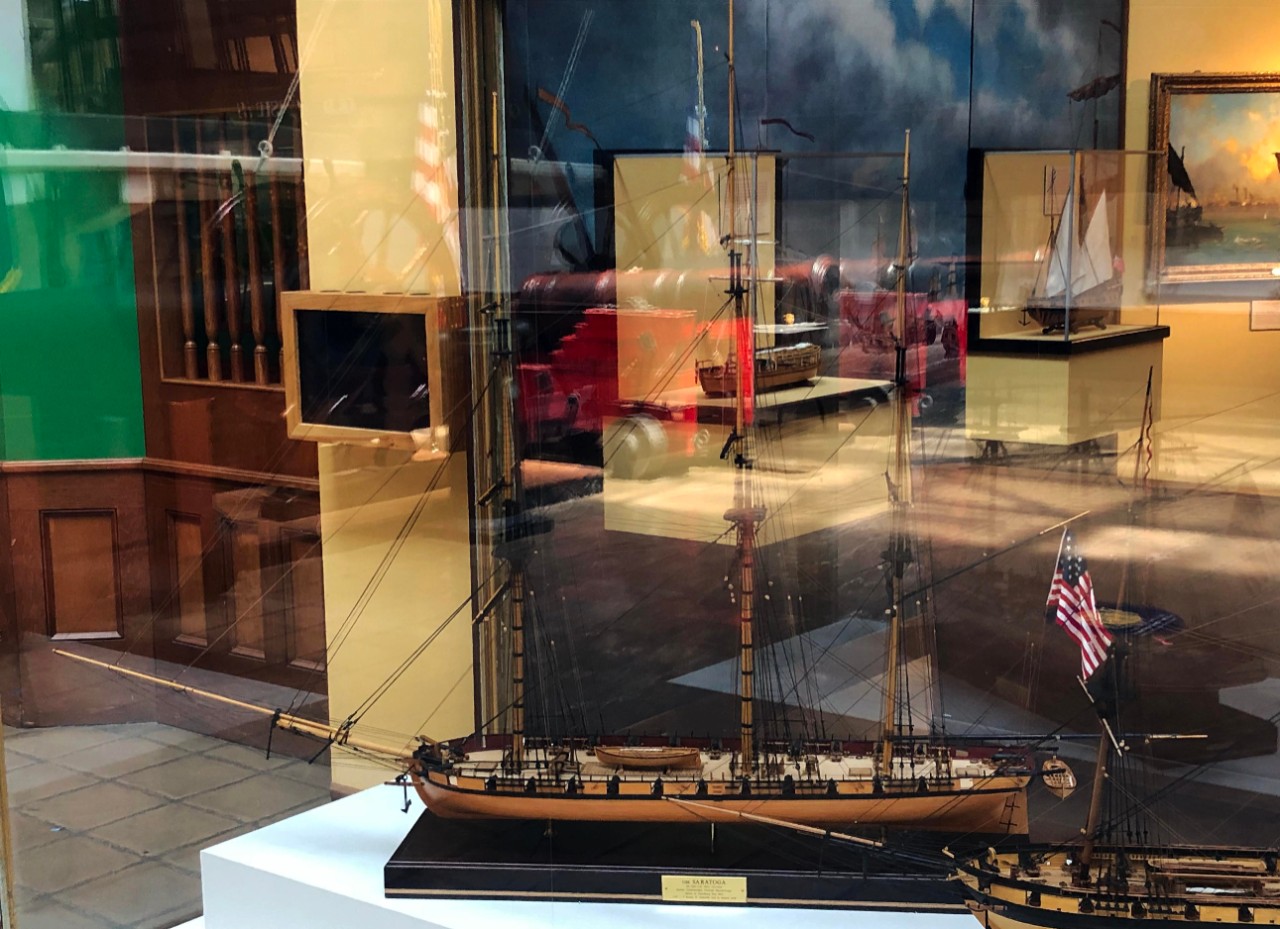 Built in Vergennes, Vermont, in 1814 by Noah Brown, she was launched 11 April 1814, and sailed under Master Commandant Thomas Macdonough. She was the American flagship that fought against the British at the Battle of Lake Champlain. After the war Saratoga was laid up at Whitehall, New York, until 1825 when the Navy sold it.

This model is on display in the Constitution Fighting Top area in Building 76. 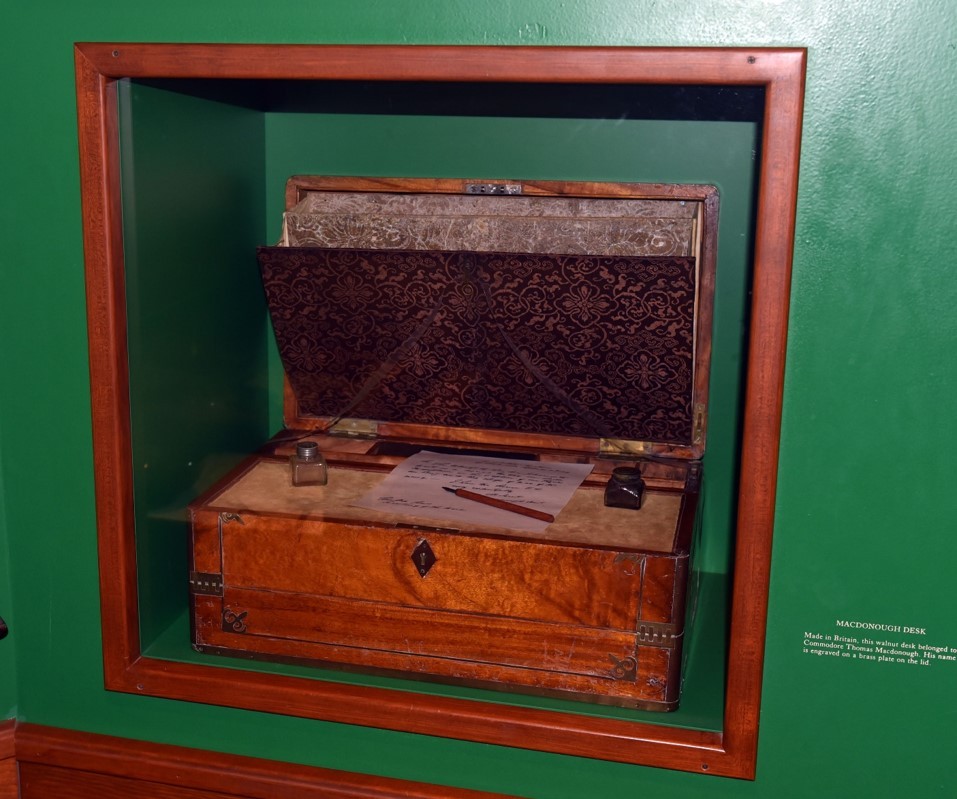 Macdonough used this desk to write reports to Secretary of the Navy William Jones on the progress and condition of the Lake Champlain fleet, and his dispatch on the naval action at Plattsburg.

This artifact is located in The Forgotten Wars of the 19th Century exhibit area in Building 76.

In contrast to many of the naval clashes during the war, the Battle of Plattsburgh was stationary. Rather than fight while sailing, Macdonough decided to anchor his fleet and await the arrival of the British. Upon contact, the British and American forces commenced firing destructive broadsides. Locked in a firefight, the American fleet gained the advantage through maneuvering. Having suffered extensive damage to one side of his ship, Macdonough swung his flagship, Saratoga, around to bring the uninjured side of his ship, with its previously unused guns, to bear. The renewed firepower made the difference in the battle, allowing the capture of four enemy ships. Upon seeing the American victory, British land forces ceased their attack, signaling the end of the British actions from Canada for the remainder of the war. 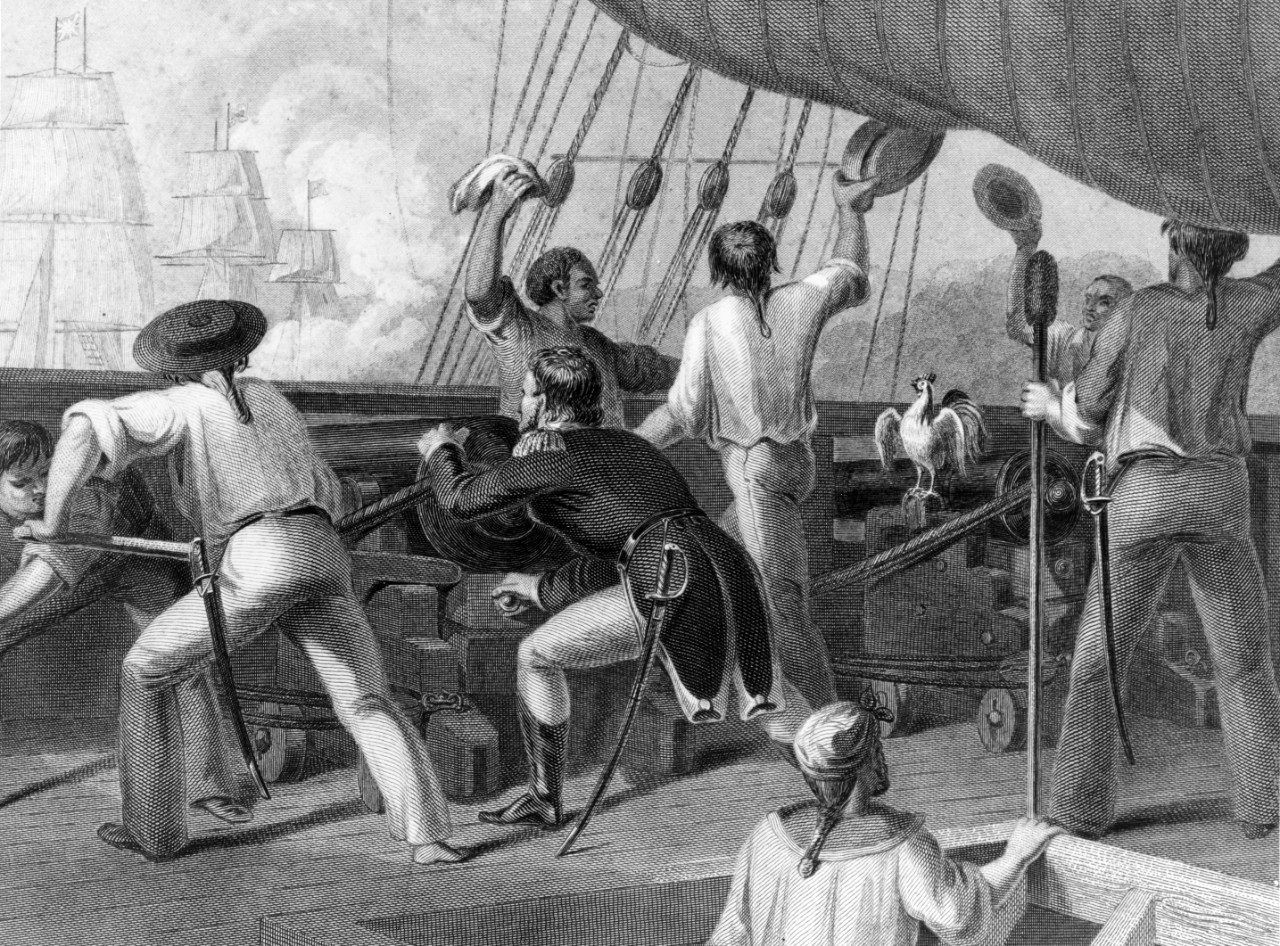 Thomas Macdonough, as he often did, personally aimed the first shot of the Battle of Plattsburgh and destroyed the steering wheel of the enemy’s flagship, Confiance.

Our Guns on the starboard side, being nearly all dismounted, or not manageable, a Stern anchor was let go, the bower Cable cut, and the ship winded with a fresh broadside on the Enemy’s ship, which soon after surrendered…

Thomas Macdonough, describing how he turned his ship during the battle to bring fresh guns to bear on the enemy 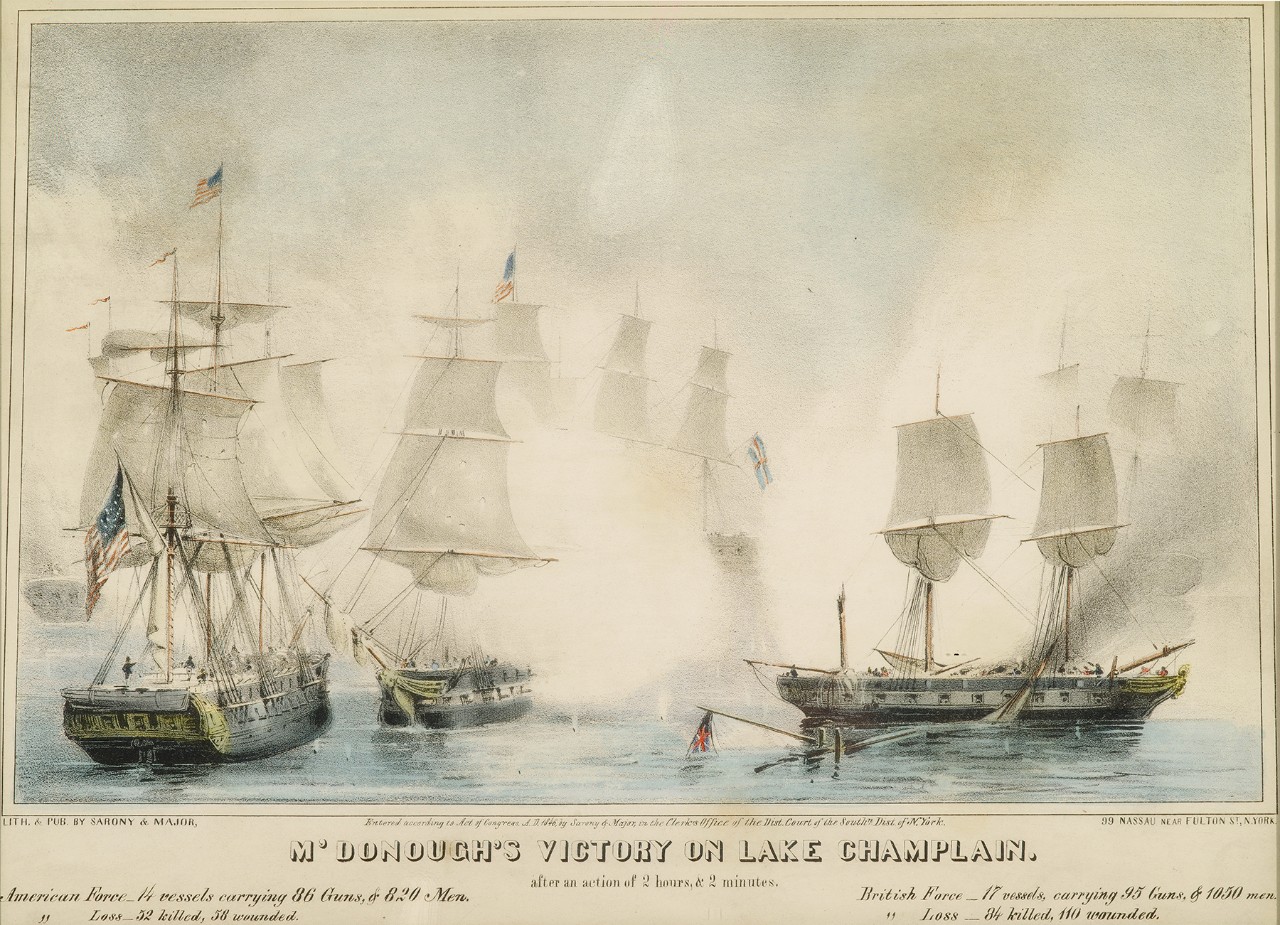 Macdonough’s squadron won a decisive victory over the British on Lake Champlain in the Battle of Plattsburgh, ending British aggression in the area and strengthening the negotiating power of American delegates at the end of the war. 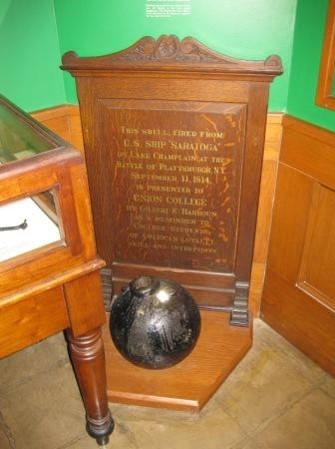 This artifact is located in The Forgotten Wars of the 19th Century exhibit area in Building 76.

For the victory at Plattsburg on Lake Champlain, Congress awarded three gold medals, one to Macdonough, one to Henley, and one to Cassin. Commissioned officers received silver medals cast of the same design. Congress rewarded the midshipman and sailing-masters with ceremonial swords and enlisted crewmembers with an extra three-months pay. These medals are copies made from bronze. 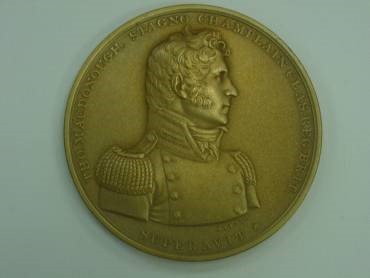 A Lieutenant when he took over command of the Champlain fleet, Thomas Macdonough received a promotion to Captain for his skilled guidance over the naval victory at the Battle of Plattsburgh. 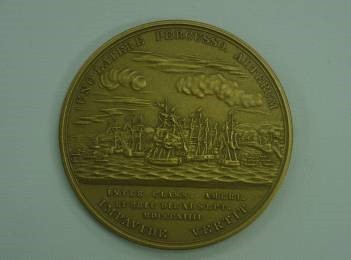 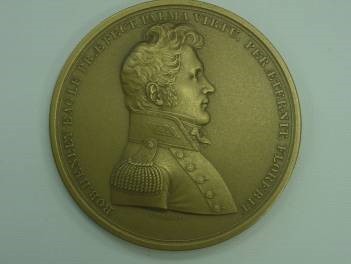 Rob Henley was the captain of USS Eagle at the Battle of Plattsburgh. the sloop Eagle severely damaged the sloop HMS Chubb during the battle, allowing boarders from the corvette Saratoga to capture the British vessel. 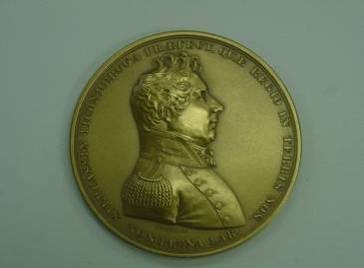 Stephen Cassin served as lieutenant on board the schooner Ticonderoga during the War of 1812. At the Battle of Plattsburgh, Ticonderoga disabled HMS Finch with her gunfire in an hour-long engagement.

The Battle of New Orleans occurred after the signing of the Treaty of Ghent but before President Madison signed the document and the Senate ratified it, signaling the end of hostilities. Veteran British soldiers, transferred from Europe after the defeat of Napoleon’s army, fought Tennessee and Kentucky backwoods riflemen, backed by a few regulars, local militia, and a detachment of sailors, all led by Andrew Jackson. Although the New Orleans navy yard was less well manned and supplied than East coast yards, U.S. naval forces there supported the army on the water and on land. 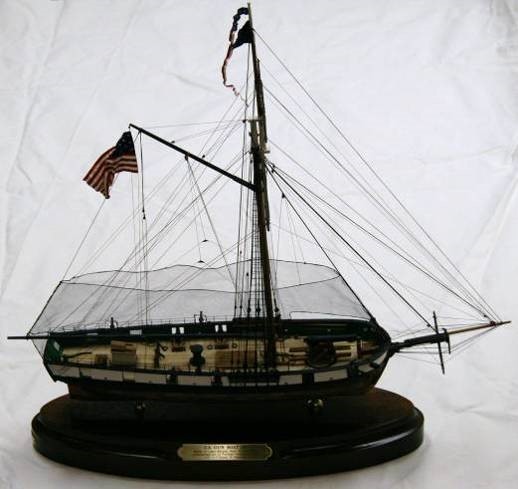 The naval force stationed at New Orleans lacked large vessels capable of successfully resisting the British invasion fleet. The Navy operated gunboats like this one, commanded by Lieutenant Thomas ap Catesby Jones, for patrol and reconnaissance.

This model is located in The Forgotten Wars of the 19th Century display area in Building 76. 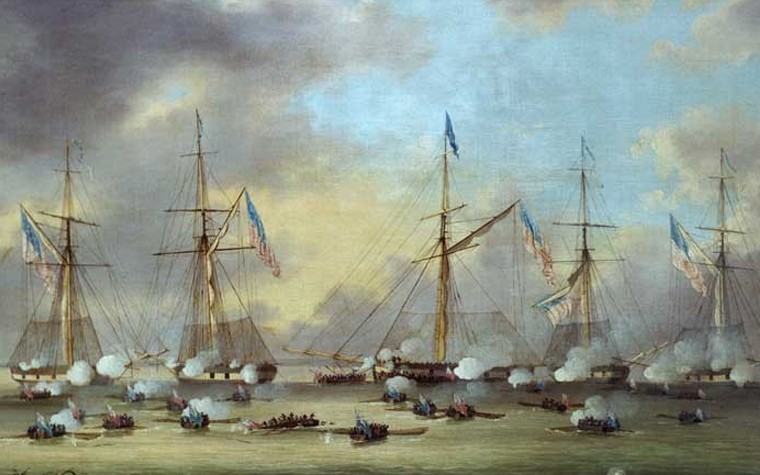 Thomas ap Catesby Jones and his five gunboats attempt to repel the British attack on Lake Borgne. The overwhelming advantage in numbers the British enjoyed led to the American defeat and the loss of the gunboats, Andrew Jackson’s eyes and ears on the water. 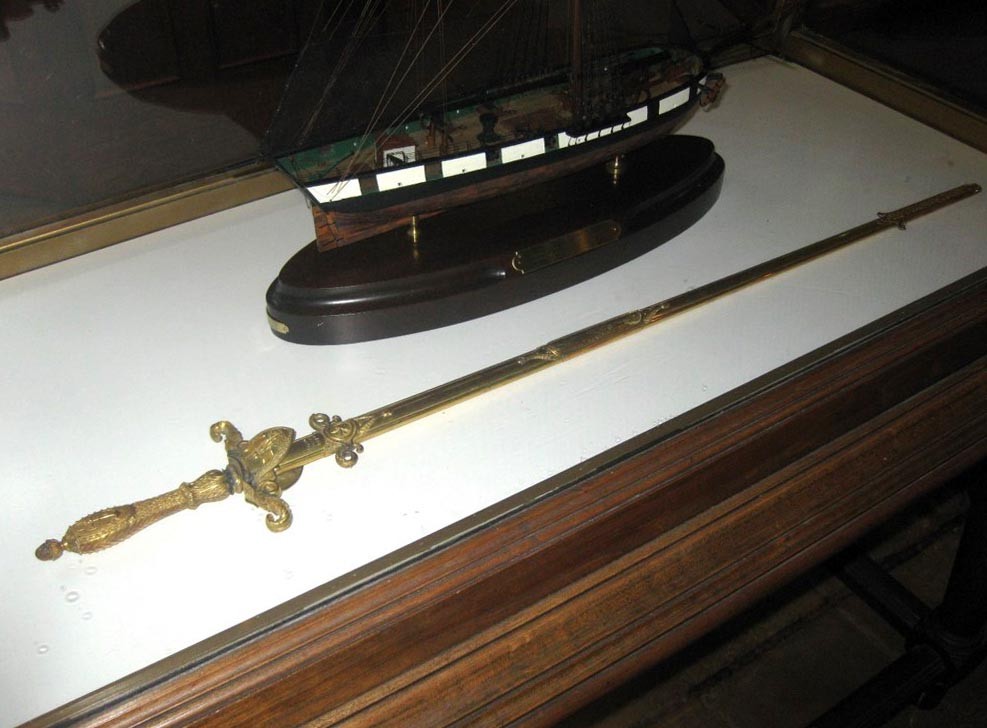 This sword, presented to Jones for his bravery during the battle of Lake Borgne, has ornate design features including full text of the circumstances by which he earned the sword and a depiction of the battle on the sheath. Despite this loss, Lieutenant Jones and his sailors succeeded in delaying the British for nine precious days, time Jackson used to prepare his ultimately successful defense of New Orleans.

This artifact is on display in The Forgotten Wars of the 19th Century exhibit area in Building 76. 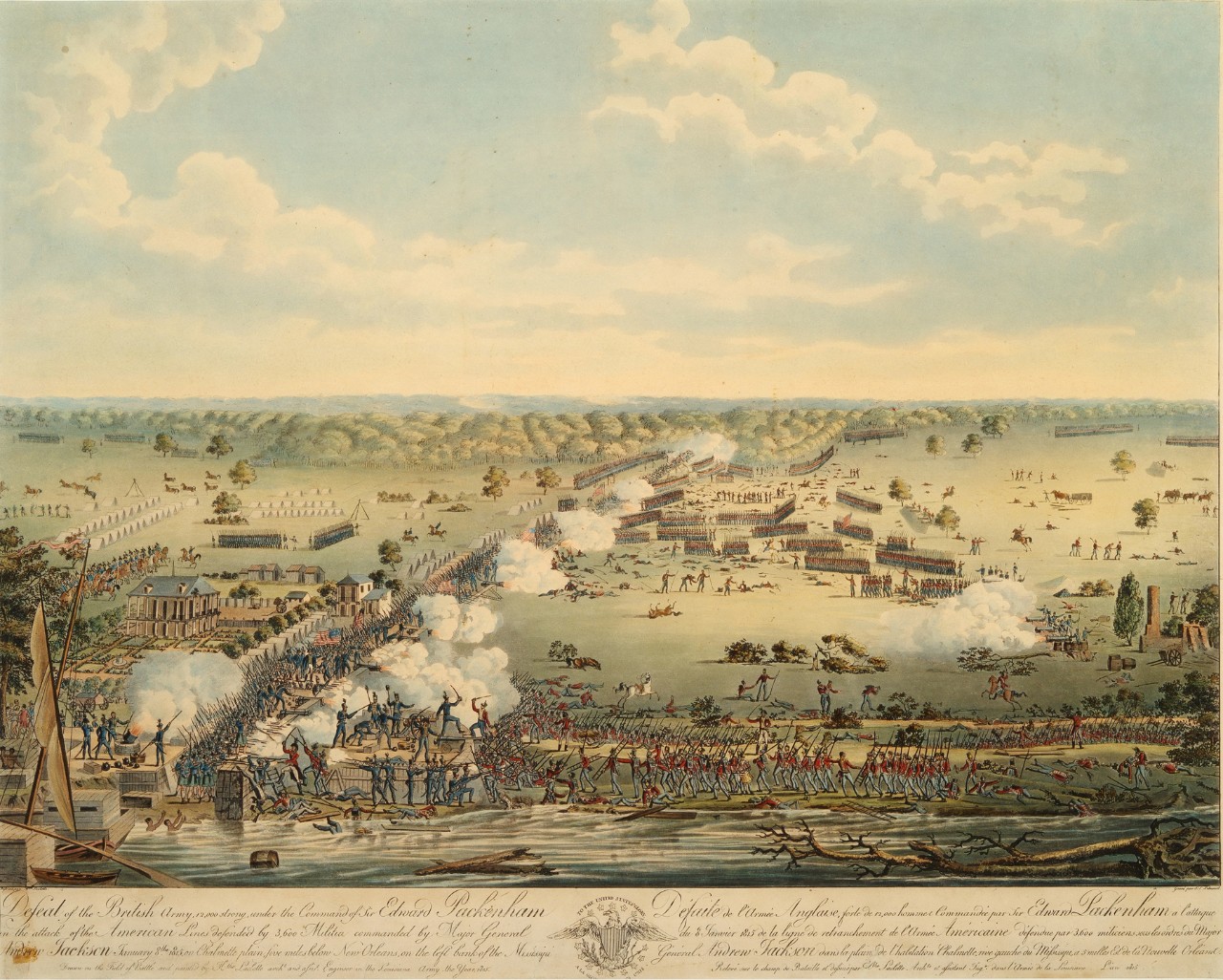 The Battle of New Orleans.  Lithograph; By P. L. Debucourt after Jean-Hyacinthe La Clotte; 1850.  Courtesy of the Navy Art Collection

U.S. Navy involvement in the British invasion at New Orleans did not end with the Battle of Lake Borgne; American sailors served on land as artillery crews in clashes leading up to and including the climactic Battle of New Orleans on January 8, 1815, an American victory that signaled the end of land battles in the War of 1812.