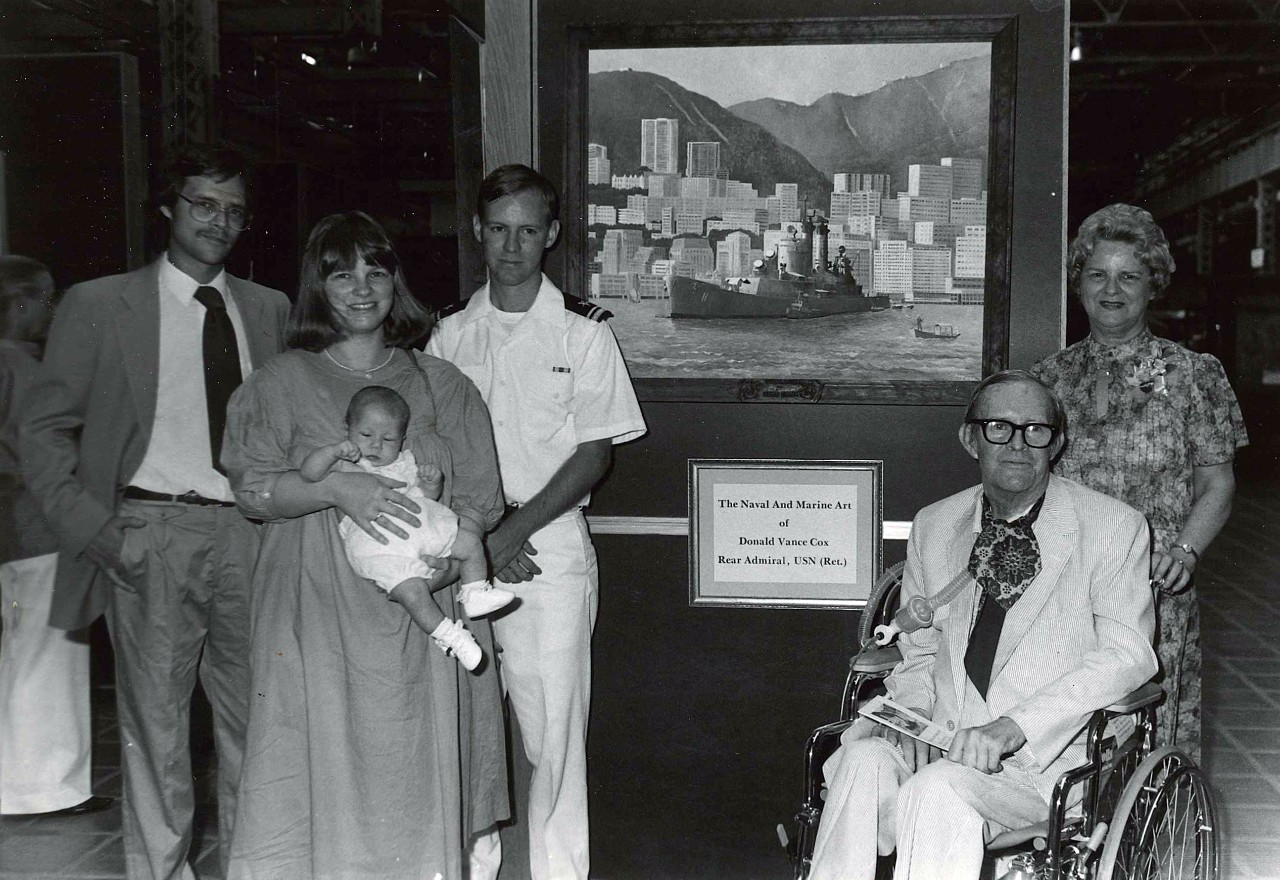 Storm on Pomano Beach. Occurred while visiting lighthouse. On-site sketch made for painting. Oil on Canvas, 20 in. x 24 in. 1980.

Prospect Harbor Light. Light and Lighthouse, located on U.S. satellite station nor far from Winter Harbor. Used as visitor’s cottage. Painted while a guest. Oil on Canvas, 18 in. x 24 in. 1974.

Cape Hatteras Light with Fisherman. Painted on site. Shows efforts to stem beach erosion. Oil on Canvas, 16 in. x 20 in. 1973.

USS Georgia (SSBN-729). Painted for Son-in-Law, Lieutenant Commander Duncan, Prospective Executive Officer of Georgia on occasion of the submarine’s launching. Acrylic on Canvas, 18 in. x 24 in. 1982.

USS Yarnell in Indian Ocean. Painted for son Lieutenant Junior Grade T.E. Cox to commemorate1982 deployment of Yarnell (CG-17) with the aircraft carrier USS America (CV-66) in the Indian Ocean. Oil on Canvas, 24 in. x 30 in. 1982.

Idaho and Kingfisher. Long-time favorite memory from personal experiences as gunnery observer, at invasion of Peleliu Island, 1944. Acrylic on Canvas panel, 8 in. x 10 in. 1979.

USS West Point (ID# 3254). New liner converted to troop transport at Naval Operating Base Norfolk 1941. Sketched on site. Painted at home on leave. Oil on Masonite panel, 18 in. x 24 in.

Retirement Ceremony. Sketched on visit to Destroyer Piers, Norfolk. Shows USS Moosbrugger (DD-980) stripped of rank and guns depressed, being towed off to retirement in the Reserve Fleet. Acrylic on Canvas panel, 8 in. x 10 in. 1979. 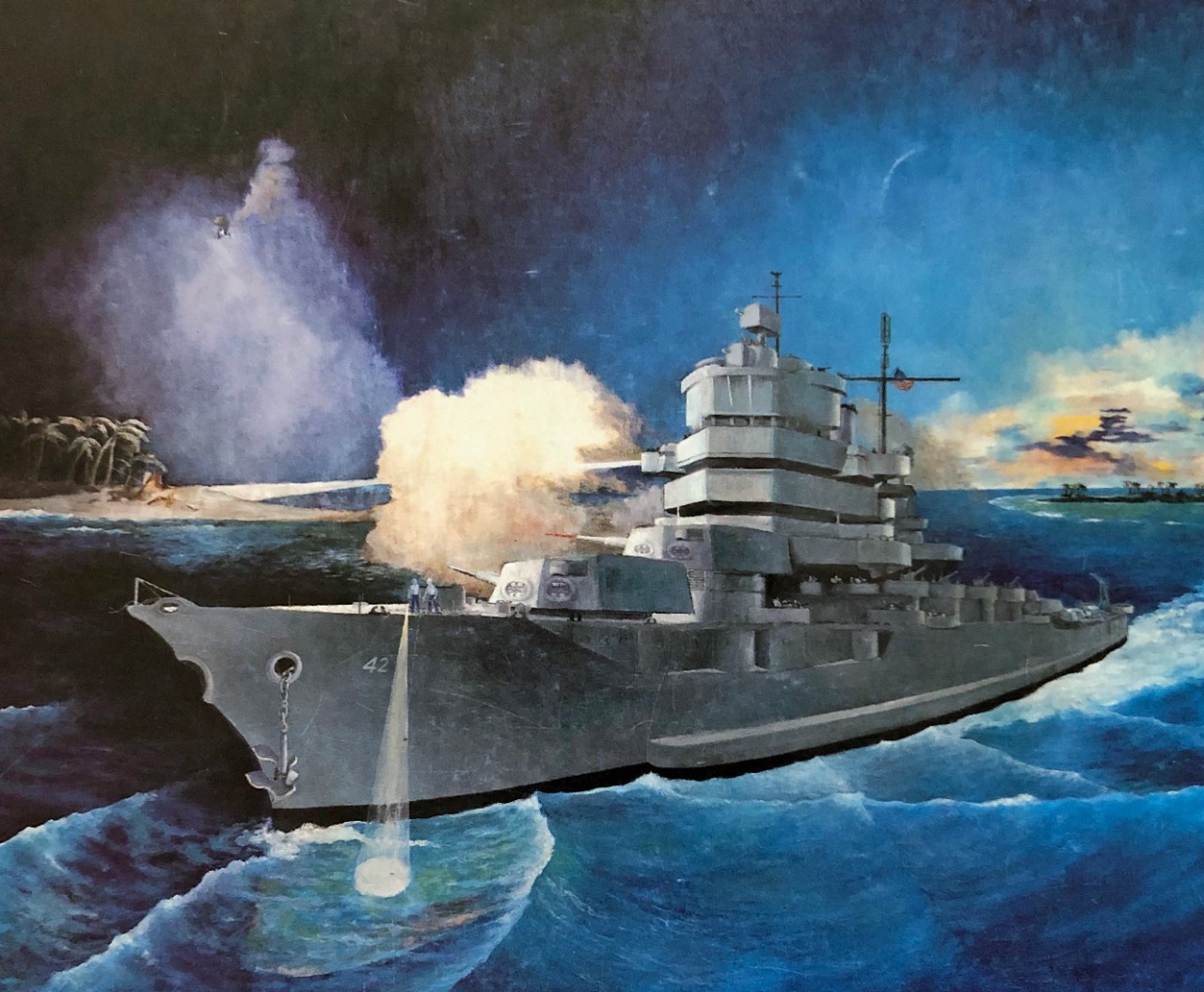 Rear Admiral Cox was born in Farragut, Iowa, on May 6, 1921. After graduation from high school, he attended Wentworth Military Academy for two years. He entered the U.S. Naval Academy in 1940 and was commissioned an Ensign in June 1943, subsequently being selected for rank of Rear Admiral in 1969. He retired from the Navy in 1974. Rear Admiral Cox is married to the former Evelyn Brewer of Annapolis, Maryland. They have three children, Mrs. Gena Duncan, whose husband is Lieutenant Commander M.G. Duncan, currently Prospective Executive Officer of USS Georgia (SSBN-729); Donald Vance Cox, Jr., a commercial artist in Northern Virginia; and Thomas E. Cox, a Lieutenant Junior Grade now serving as Communications Officer on the guided-missile cruiser, USS Yarnell (CG-17). They also have three grandchildren.

Rear Admiral Cox served in the battleship USS Idaho (BB-42) during World War II in the Pacific area and afterwards on board USS Maddox (DD-731), as Gunnery Officer. He then attended the U.S. Postgraduate School in Annapolis, Maryland, and the Johns Hopkins University for ordnance engineering postgraduate training in guided missiles, earning an MS degree in Electrical Engineering.

He served as Gunnery Officer in USS Richard E. Krause (DD-849), as Missile Test Officer in USS Mississippi (BB-41); and Surface-to-Air Guided Missile Project Officer on the staff of the Chief of Naval Operations. He was Executive Officer of USS Decatur (DD-936), helping to place the ship in commission at Boston in 1956. His next assignment was a Terrier and Tartar Research and Development Project Officer and Program Manager in the Bureau of Ordnance and the Bureau of Naval Weapons.
In 1960 and 1961, Rear Admiral Cox, attended the War College of the U.S. Air Force at Maxwell Field, Alabama. On the first of December 1961, at Boston, Massachusetts, Rear Admiral Cox placed USS Robinson (DDG-12) in commission as first Commanding Officer of that new guided missile destroyer. Rear Admiral Cox next reported to new duty in Washington, D.C. as Executive Assistant for Surface Missile System in the Bureau of Naval Personnel. In April 1965, he assumed duties as Head of the Enlisted Distribution Branch in that Bureau.

In July 1966, in Subic Bay, Philippines, he assumed command of USS Chicago (CG-11). Under his command, Chicago twice deployed to the Tonkin Gulf. In 1968, the guided-missile cruiser was awarded the Meritorious Unit Commendation for participation in actions in the Tonkin Gulf and the Sea of Japan.
In addition, Chicago, won the “E” for excellence in completion with the Pacific Fleet cruisers and departmental “E’s” in Weapons, Engineering and Operations. Command of Chicago was followed by a tour on the staff of the Chief of Naval Operations as Deputy Program Coordinator for Anti-Ship Missile Defense. He was serving in this billet when selected for Rear Admiral and ordered to new duty as Commander Training Command, U.S. Pacific Fleet on August 28, 1969. In November 1970, he relieved as Commander Cruiser Destroyer Group 3 and Commander Cruisers and Destroyers, U.S. Seventh Fleet. During this tour his old command, Chicago, was the flagship. In March 1971, he was ordered to OPNAV as the first Program Coordinator for LAMPS and the Sea Control Ship. In 1972, he assumed additional duties as Assistant DCNO for Surface Warfare. From 1973, until retirement in 1974, he served as Deputy Chief of Staff for Operations, Commander in Chief, Atlantic and Atlantic Fleet.

From retirement until early 1983, Rear Admiral Cox was a consultant to Kaman Aerospace, Kaman Sciences and Ketron Corporations. He also painted vigorously during this period. His only formal art education was some drawing lessons taken when very young. In early 1982, an advancing nerve disease necessitated changing his painting hand from right to left, a change that was remarkably easy. 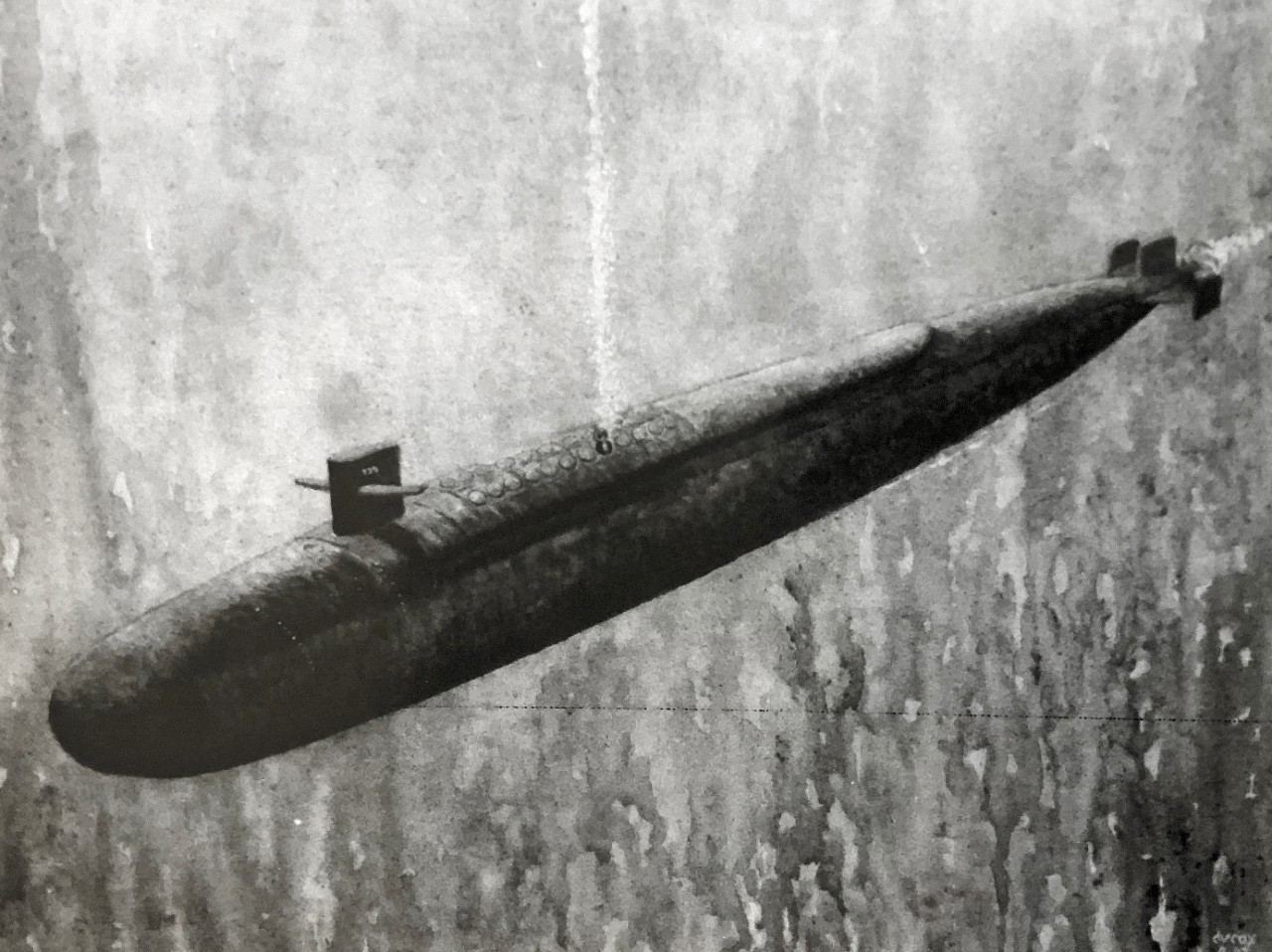