During the War of 1812, the American military focused much of its effort at the Canadian border, leaving other regions largely unprotected. Beginning in 1813, British ships and landing parties constantly harassed the vulnerable Chesapeake Bay coastal towns. The lack of national forces led communities to rely on local militia for defense. British forces easily overpowered them at places like Havre de Grace and Frenchtown. The few available American ships, including Constellation, could not break the British blockade on the Bay. 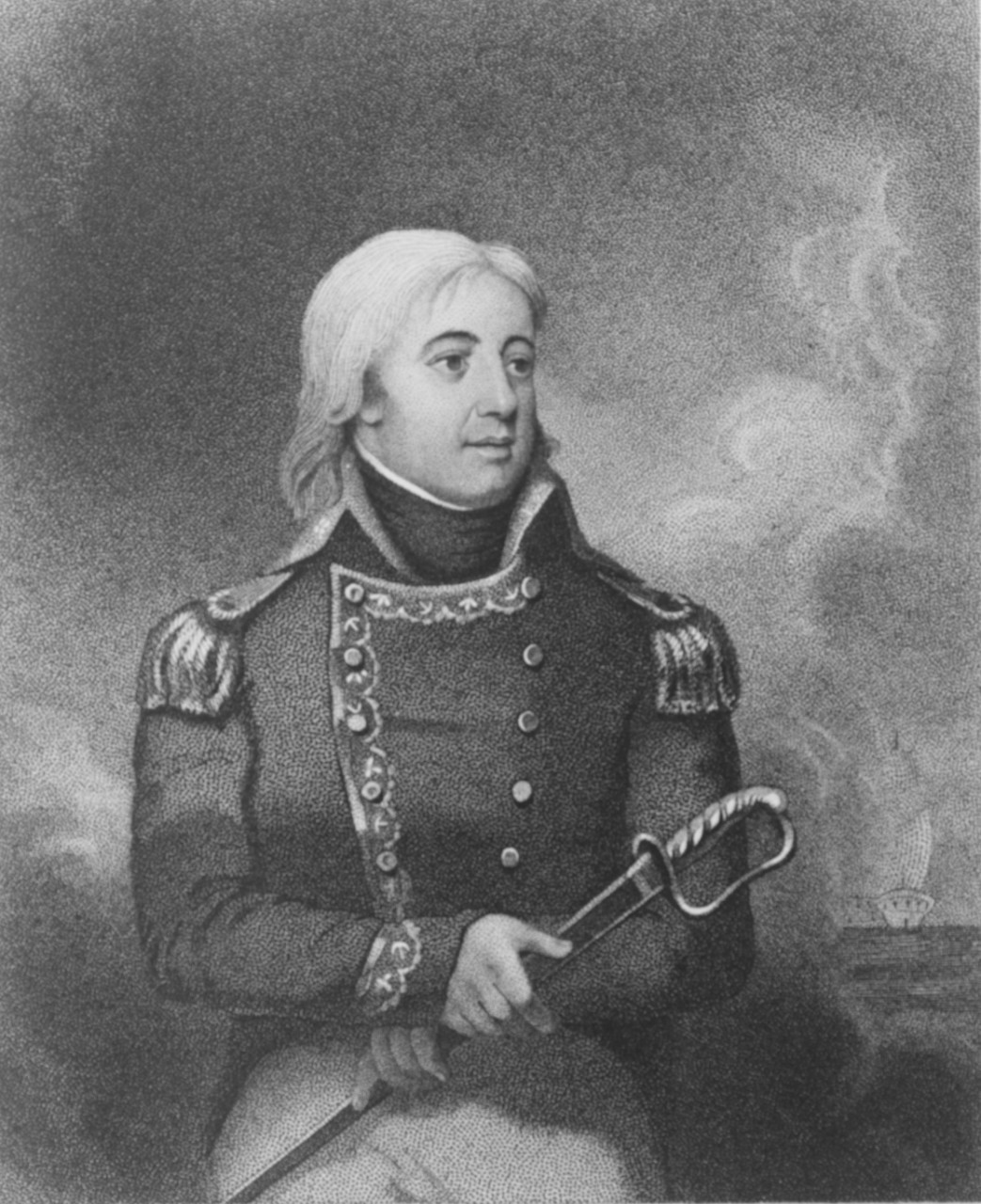 Captain Joshua Barney.  Engraving after a miniature by Isabey. Barney distinguished himself during the defense of Washington, D.C., in 1814.  NHHC Photograph Collection, NH 56818.

Following a distinguished career as a merchantman and naval officer in the Revolutionary War, Joshua Barney served as a privateer at the beginning of the War of 1812. He proposed the creation of a large fleet of small, inexpensive barges to contend with the larger enemy ships that dominated the Chesapeake Bay. Secretary of the Navy William Jones agreed and gave Barney command of the Chesapeake Bay flotilla.

I am therefore of opinion the only defense we have in our power, is a kind of Barge or Row-galley, so as to draw a small draft of water, to carry Oars, light sails, and One heavy long gun…

Commodore Joshua Barney, outlining his plan for the defense of the Chesapeake Bay 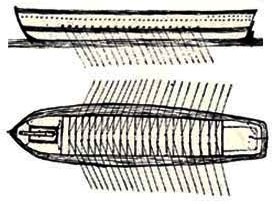 Shortly after its creation, the Chesapeake Bay flotilla encountered a superior British fleet. It spent most of the war trapped in the Patuxent River before Barney ordered the flotilla burned to avoid its capture. Archaeologists recovered these artifacts from the “Turtle Shell” shipwreck, named because the first thing found at the site was a turtle shell. The wreck is a warship from the Chesapeake Bay flotilla and evidence recovered at the site indicates that the ship is likely Scorpion, Barney’s flagship. The medical instruments retrieved, combined with the fact that the flotilla surgeon served on the ship, give researchers strong evidence to suggest the wreck is Scorpion. 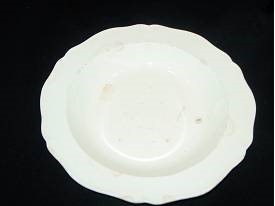 The officers and sailors of Barney’s gunboats dined off these locally and Pennsylvania-produced dishes. The naval agent purchased them at a cost of twelve for $5.00.

These artifacts are located in The Forgotten Wars of the 19th Century display area in Building 76. 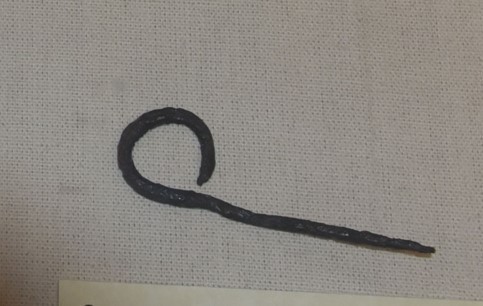 The officer or petty officer in charge of firing the gunboat’s cannon used a pick to clean the artillery pieces’ touchholes. The discovery of this small pick and a swivel gun mount proved that the gunboat carried lighter artillery pieces in addition to its two large cannon. Swivel guns directed fire at British personnel, while the large guns fired at enemy vessels. 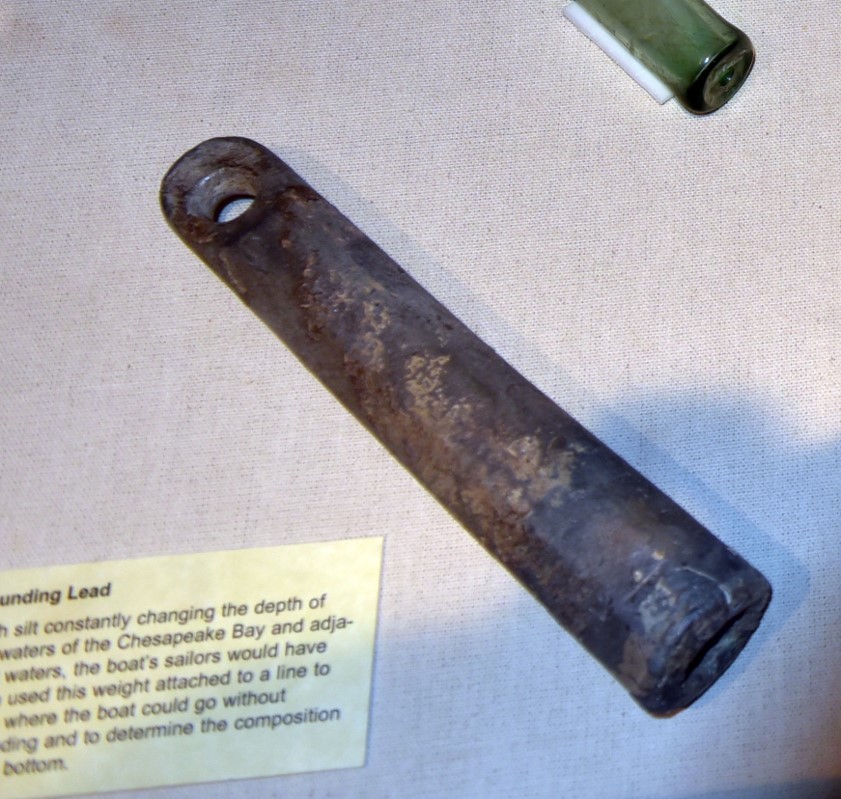 With silt constantly changing the depth of the Chesapeake Bay and its tributaries, sailors used this weight attached to a line to determine the depth and composition of the bottom.

Commodore Joshua Barney discussing the importance of establishing a sufficient defense for the Chesapeake Bay region.

The Battle of Bladensburg

Having faced little opposition in the Chesapeake Bay region, British forces advanced on the sparsely defended capital of Washington, D.C. The British used reinforcements from Europe and formed a corps of Colonial Marines from a group of runaway slaves to bolster their numbers. On August 24, 1814, this well-prepared force met a patchwork group of American militia and regular soldiers at Bladensburg, outside the capital city. Despite the brave actions of a naval detachment under Commodore Barney, the British forces easily overwhelmed the American forces.

But the fact is, that, with the exception of a party of sailors from the gunboats, under the command of Commodore Barney, no troops could behave worse than they did. 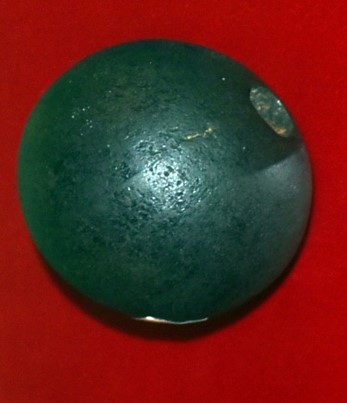 Recovered from the battlefield at Bladensburg, U.S. Navy sailors under Commodore Barney fired this shell from a 12-pounder gun. The hole in the top provided a place for a fuse, which was calculated to explode the shell over its target."

This artifact is in display in The Forgotten Wars of the 19tth Century display area in Building 76. 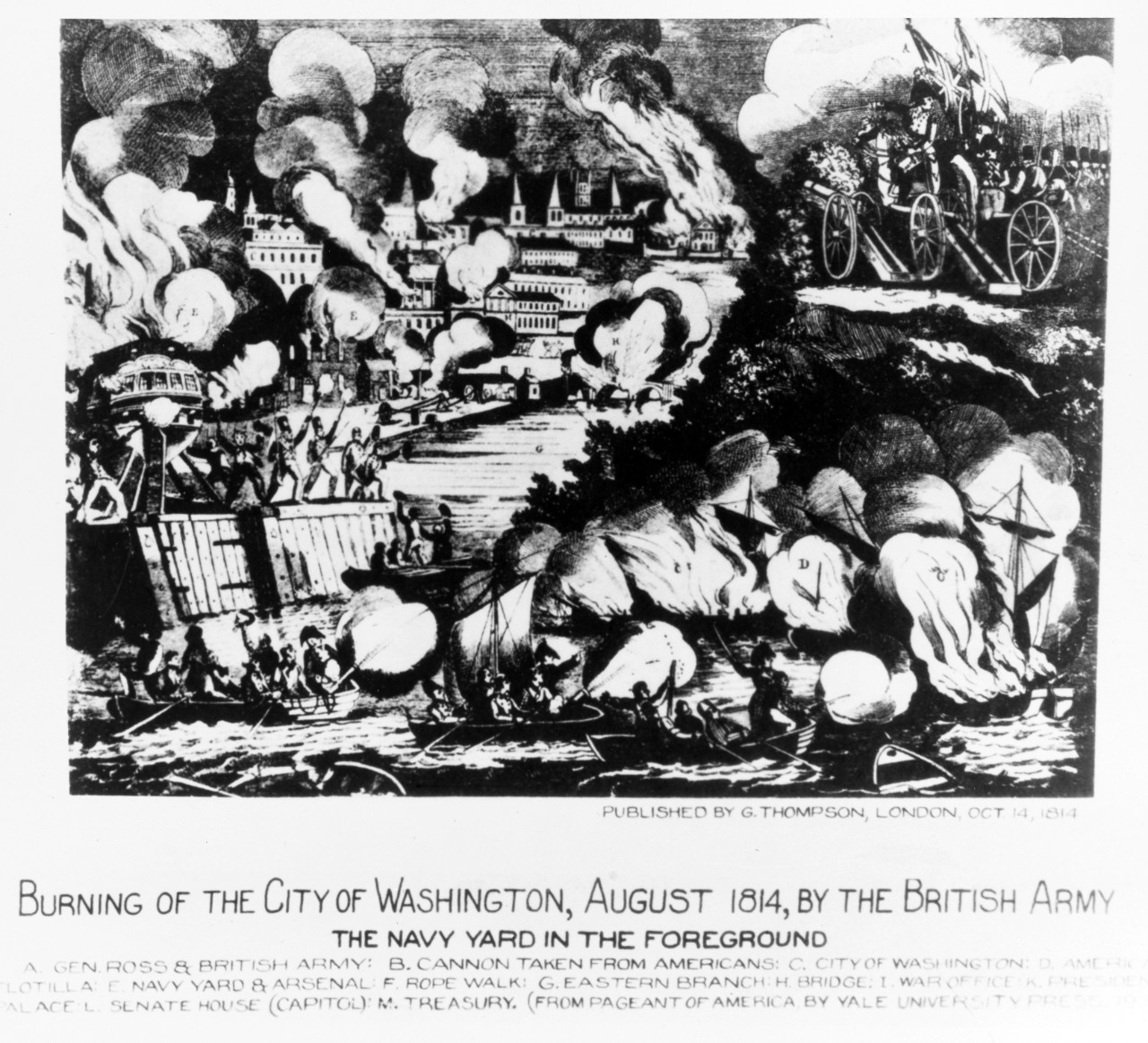 The Taking of the City of Washington in America.   NHHC Photograph Collection, NH 91938.

After the Battle of Bladensburg, the British burned public buildings in Washington, D.C. including the Capitol, the Library of Congress, and the Navy Yard in retaliation for the burning of York (present-day Toronto) by American forces in 1813. Severe weather, fear of an American counter attack, and a tragic accidental explosion at a captured munitions site convinced the British commander, General Ross, to withdraw from the city, believing his mission accomplished.