The Treaty of Ghent ended the War of 1812. It dictated that each side would return all territory, prisoners of war, and enemy property gained during the conflict. The successes of the U.S. Navy during the war convinced national leaders of the importance of naval power. They immediately took steps to provide for its continued existence and increase. After the war, political opinion in the United States switched heavily in favor of the Republican Party, signaling the beginning of the “Era of Good Feelings” characterized by the rise of American nationalism and political unity.

It has been waged with a success which is the natural result of the wisdom of the legislative councils, of the patriotism of the people, of the public spirit of the militia, and of the valor of the military and naval forces of the country.

James Madison, Special Message to Congress on the Treaty of Ghent (February 18, 1815). 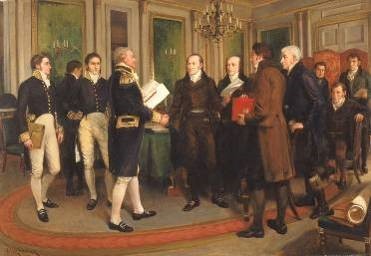 Signing of the Treaty of Ghent by A. Forestier.  Courtesy  of the Smithsonian American Art Museum.

The Treaty of Ghent

The Treaty of Ghent also called “Peace of Christmas Eve” was signed on 24 December 1814, in Ghent, Netherlands (currently in Belgium) by three English envoys and an American commission headed by John Quincy Adams. Peace discussions had begun in August 1814. After months of negotiations, against the background of changing military victories, defeats and stalemates, the parties finally realized continuing the war was pointless. 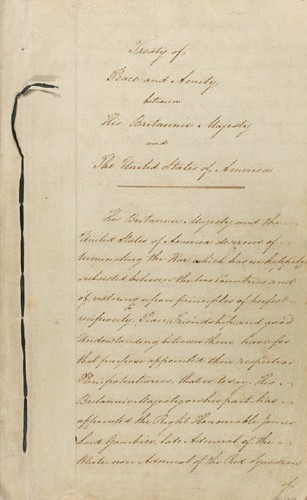 First page of the Treaty of Ghent.    U.S. National Archives. 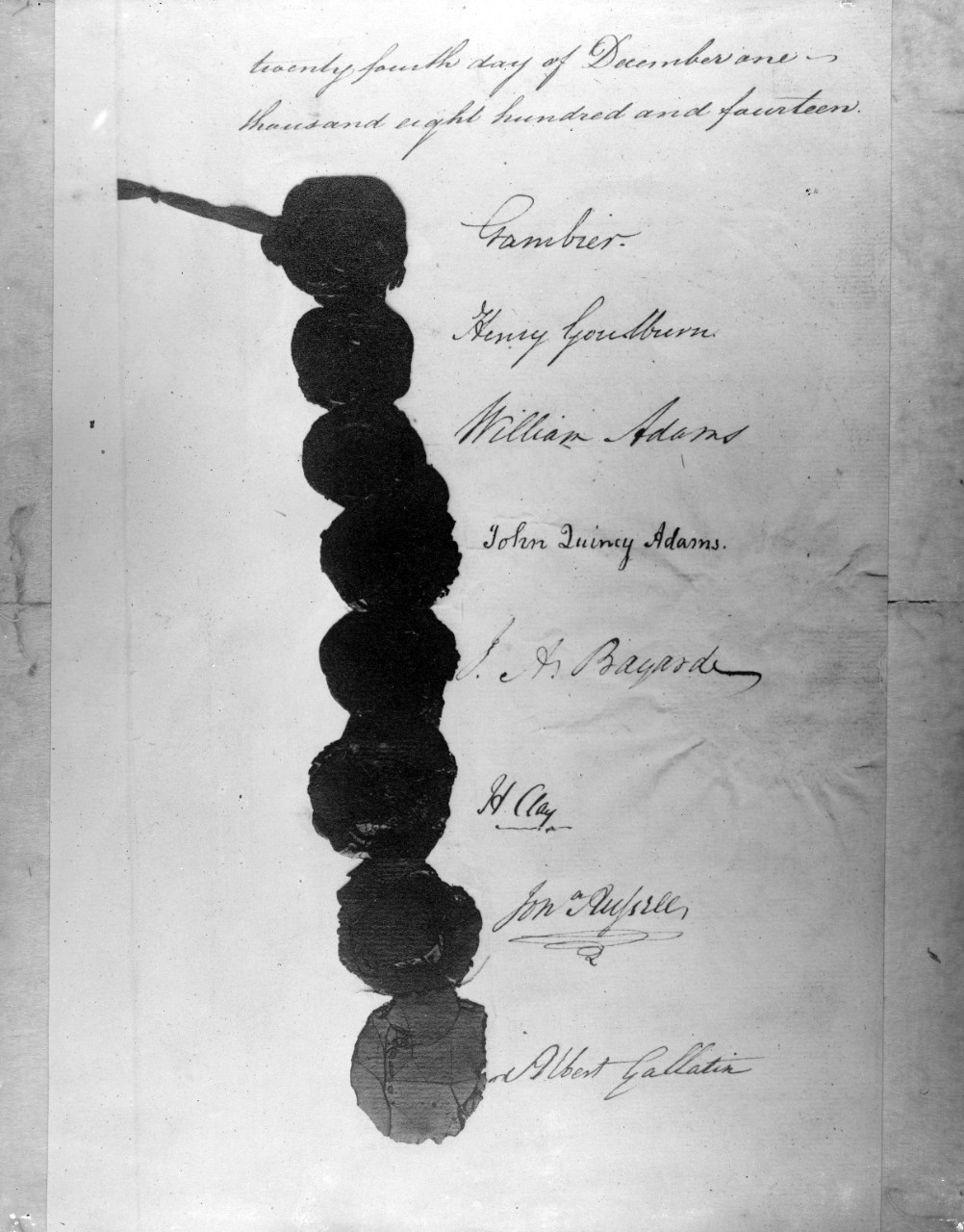 Signatures of the Treaty of Ghent.   Courtesy of the Library of Congress, LC-H25- 564.

The “Trail of Tears” was the relocation and movement of Native Americans between 1831 and 1838 from their homelands to Indian territory (present day Oklahoma) in the western United States. The ninth article of the Treaty had promised a restoration of Native American rights, which they enjoyed before the war but it had been negotiated without any Native American participation. The treaty ultimately signified the British abandonment of their Indian alliances. The conclusion of the War of 1812 marked the last real chance for Native American resistance to American designs on the West.

In the whole scene there was an air of ruin and destruction, something which betrayed a final and irrevocable adieu; one couldn't watch without feeling one's heart wrung. The Indians were tranquil, but sombre and taciturn. […] We watch the expulsion of one of the most celebrated and ancient American peoples.

Alexis de Tocqueville, Democracy in America, 1835
The French philosopher witnessed the Choctaw removals while in Memphis, Tennessee in 1831. 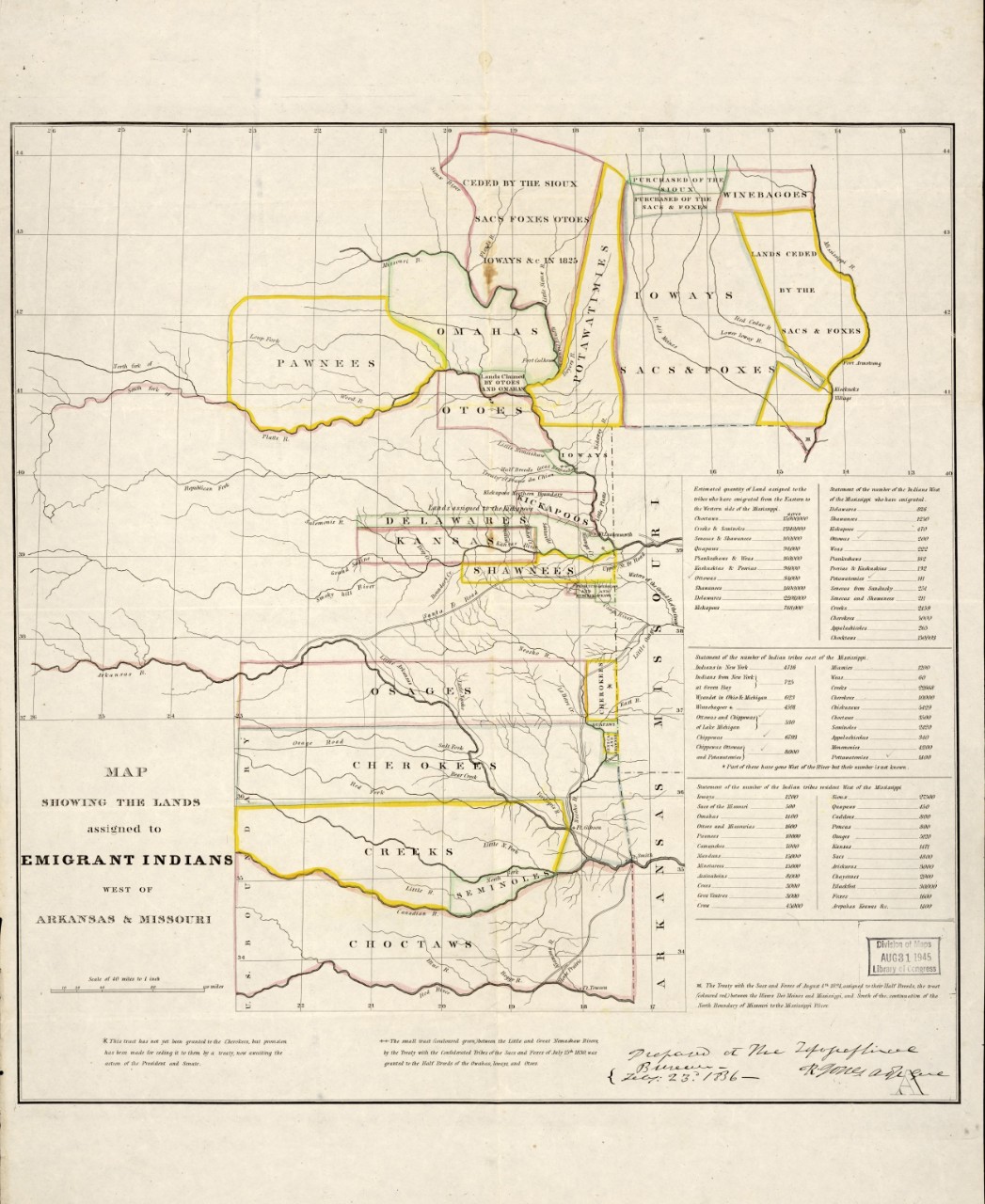 This map from 1836 shows the lands assigned to emigrant Indians west of Arkansas and Missouri. One of the results of the war of 1812 was passage of the Indian Removal Act in 1830, which President Andrew Jackson signed into law. The Removal Act did not order the removal of any American Indians, but it authorized the President to negotiate treaties that would exchange tribal land in the east for western lands that had been acquired in the Louisiana Purchase. 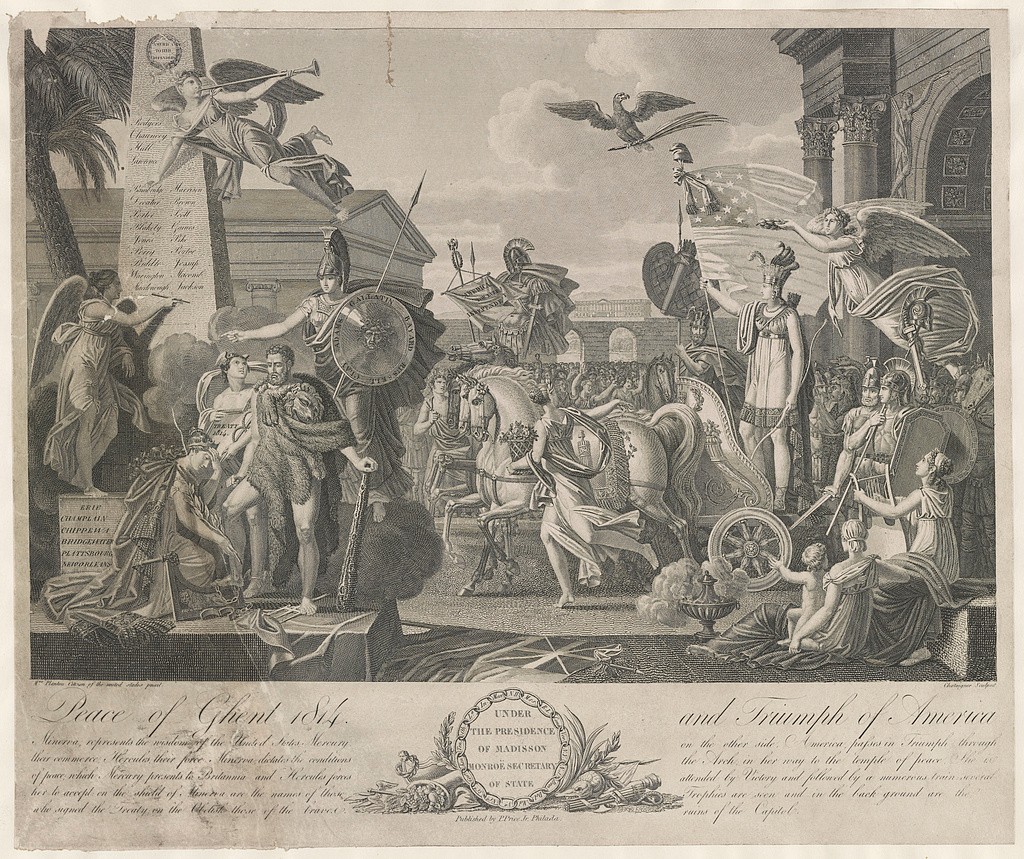 The Growth of American Nationalism

This print is an allegorical reference to the Treaty of Ghent. It shows Hercules again victorious and Columbia on her way to the Temple of Liberty, who withstood the onslaught of Britannia a second time. As it shows on this print, the War of 1812 above all promoted national self-confidence and a psychological sense of complete independence which had badly waned after the Revolutionary war. The war passed into history not as a futile and costly struggle but as a glorious triumph and a “second war of independence”.

The war has renewed and reinstated the national feelings and character which the Revolution had given, and which were daily lessened. The people are more American; they feel and act more as a nation.

Albert Gallatin, Secretary of the Treasury, Letter to Matthew Lyon (May 7, 1816) 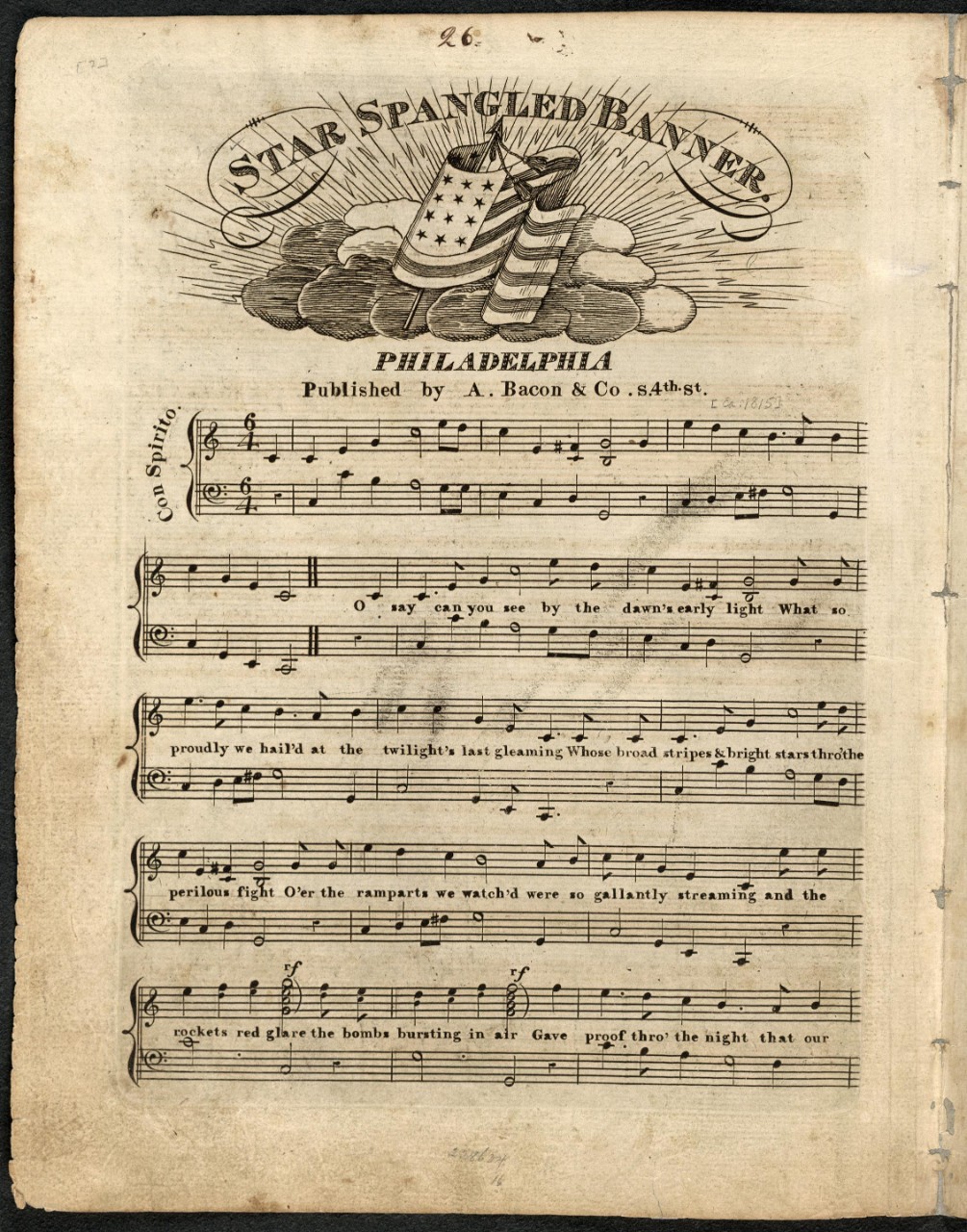 The lyrics of the national anthem of the United States of America were written during the War of 1812 by the lawyer and poet Francis Scott Key. He witnessed the bombardment of Fort McHenry by Royal Navy ships during the Battle of Baltimore. Key was inspired by the American victory and the sight of the large American flag flying triumphantly above the fort. This is a print of the lyric made circa 1850. 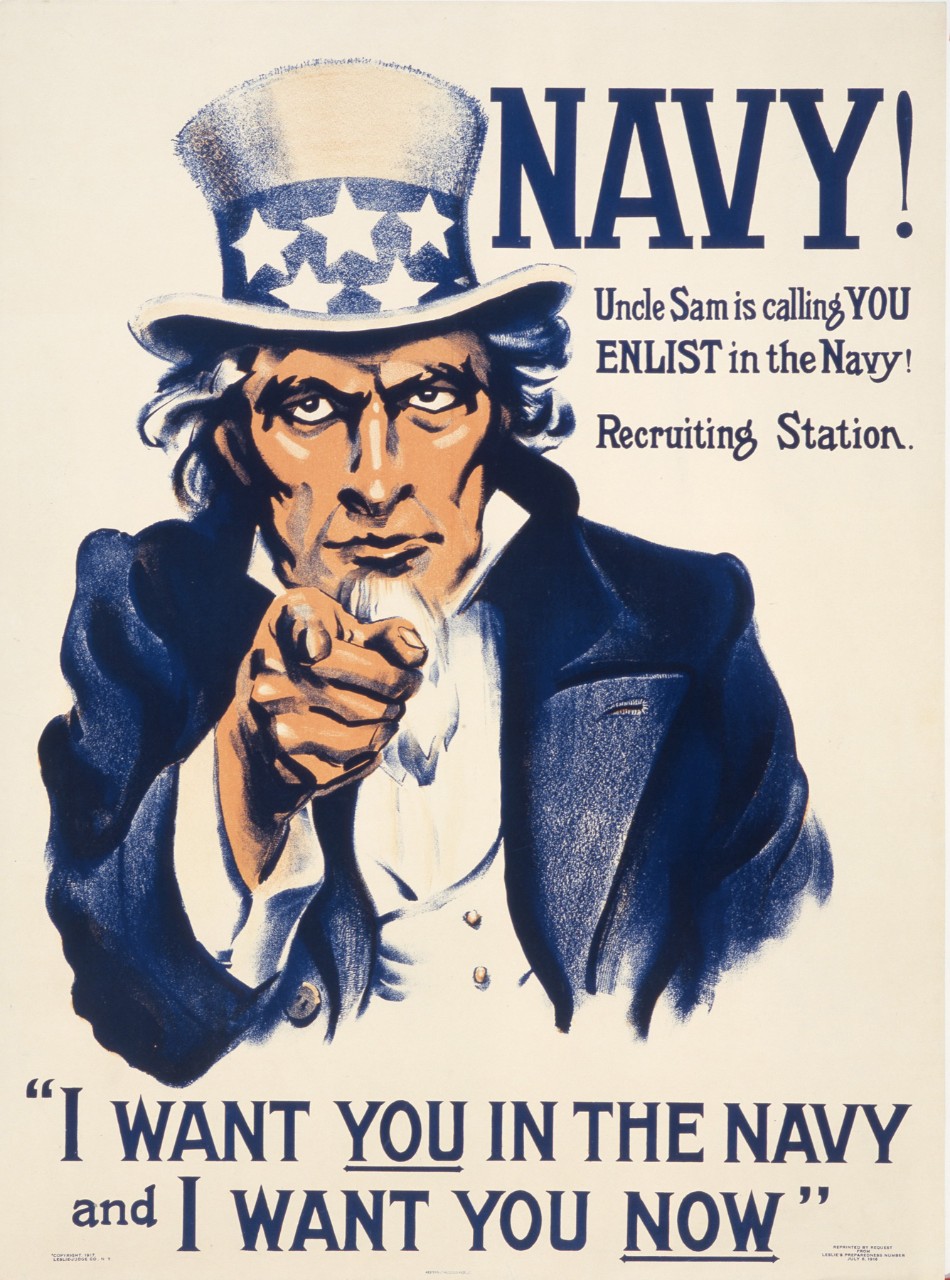 The first usage of the term “Uncle Sam” dates from the War of 1812. This American personification was based on a real man, Samuel Wilson, a businessman from Troy, New York. He provided the army with barreled meat during the War. The barrels were prominently labeled "U.S." for the United States, but it was jokingly said that the letters stood for "Uncle Sam." Soon, Uncle Sam was transformed in this cartoon icon and used as shorthand for the federal government.

After the War of 1812, the Federalist Party essentially dissolved, as politicians and public opinion shifted almost universally to the Republican Party. The postwar period witnessed unprecedented political unity and, combined with the surge of nationalism after wartime victories, this period was deemed the ‘Era of Good Feelings.’ The phrase was coined by Benjamin Russell in the Boston newspaper Columbian Centinel, on July 12, 1817, following the good-will visit to Boston of President James Monroe.

The Rise of the U.S. Navy

As the Navy had been the source of nearly all the American wartime victories, the War of 1812 convinced national leaders that a strong U.S. Navy was essential for national security and economic life. Congress appropriated $200,000 per year over 8 years in order to build nine new 74-gun ships, and twelve 44-gun frigates. It was the only time in American history when an increase in naval power occurred in a postwar period. 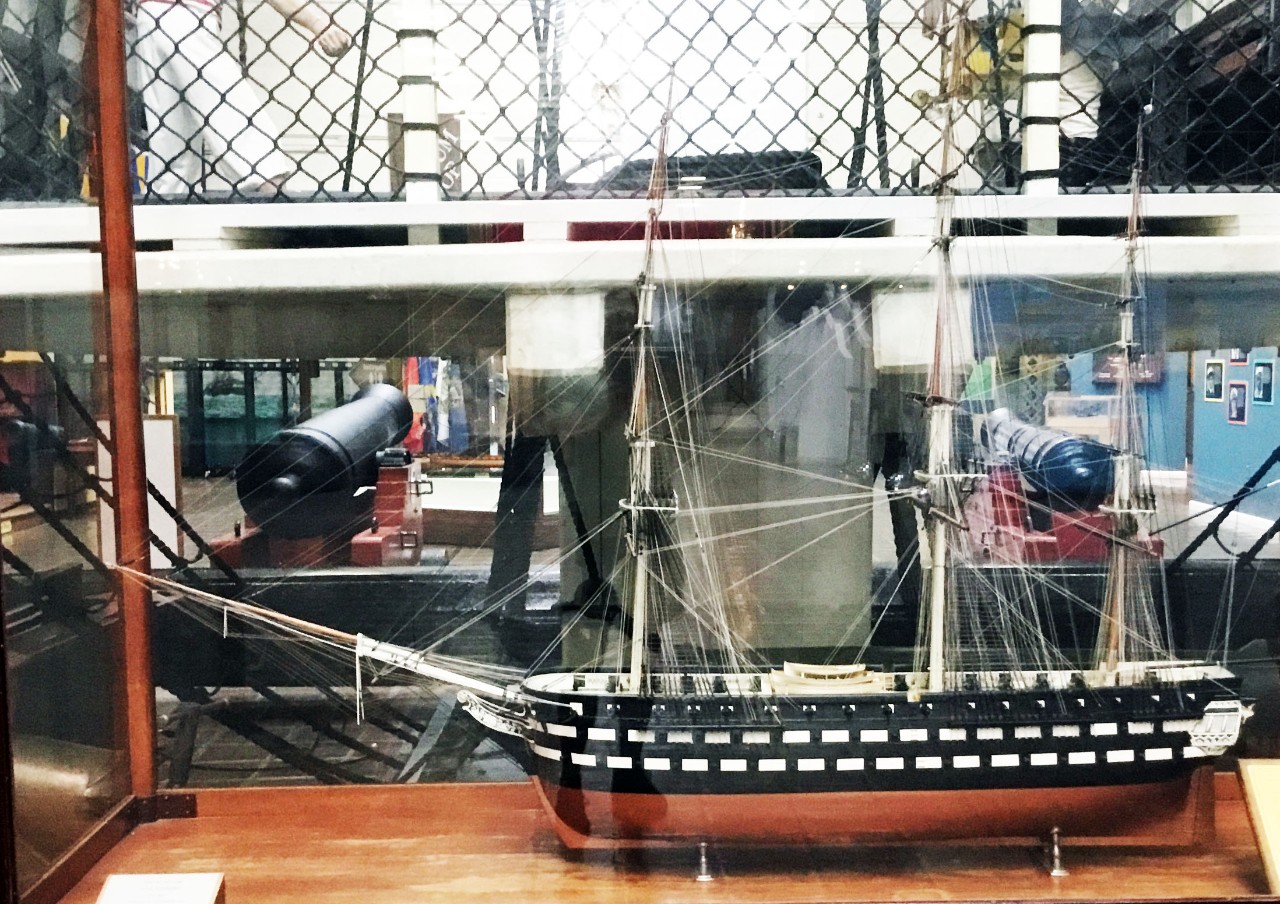 The U.S. Navy built the ship-of-the-line Vermont in the flurry of activity immediately following the War of 1812. She was laid down at the Boston Navy Yard in September 1818, finished about 1825, and kept on the stocks until finally launched at Boston, Massachusetts on 15 September 1848. Its only naval service was as a repair ship at Port Royal, South Carolina, during the Civil War. In the summer of 1864 she was ordered to New York for duty as receiving ship and on August 1901 she was place out of commission.

This model is in the Constitution Fighting Top area of The Forgotten Wars of the 19th Century exhibit in Building 76. 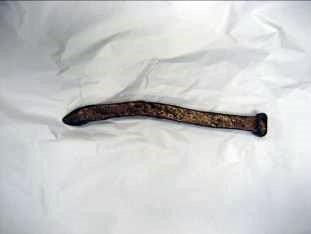 Spike from the ship-of-the-line Alabama

The name Alabama was first assigned to the 74-gun ship-of-the-line which was laid at the Portsmouth Navy Yard five years after the end of the war. Work proceeded slowly until the outbreak of the Civil War when "Almost Alabama" was renamed New Hampshire. 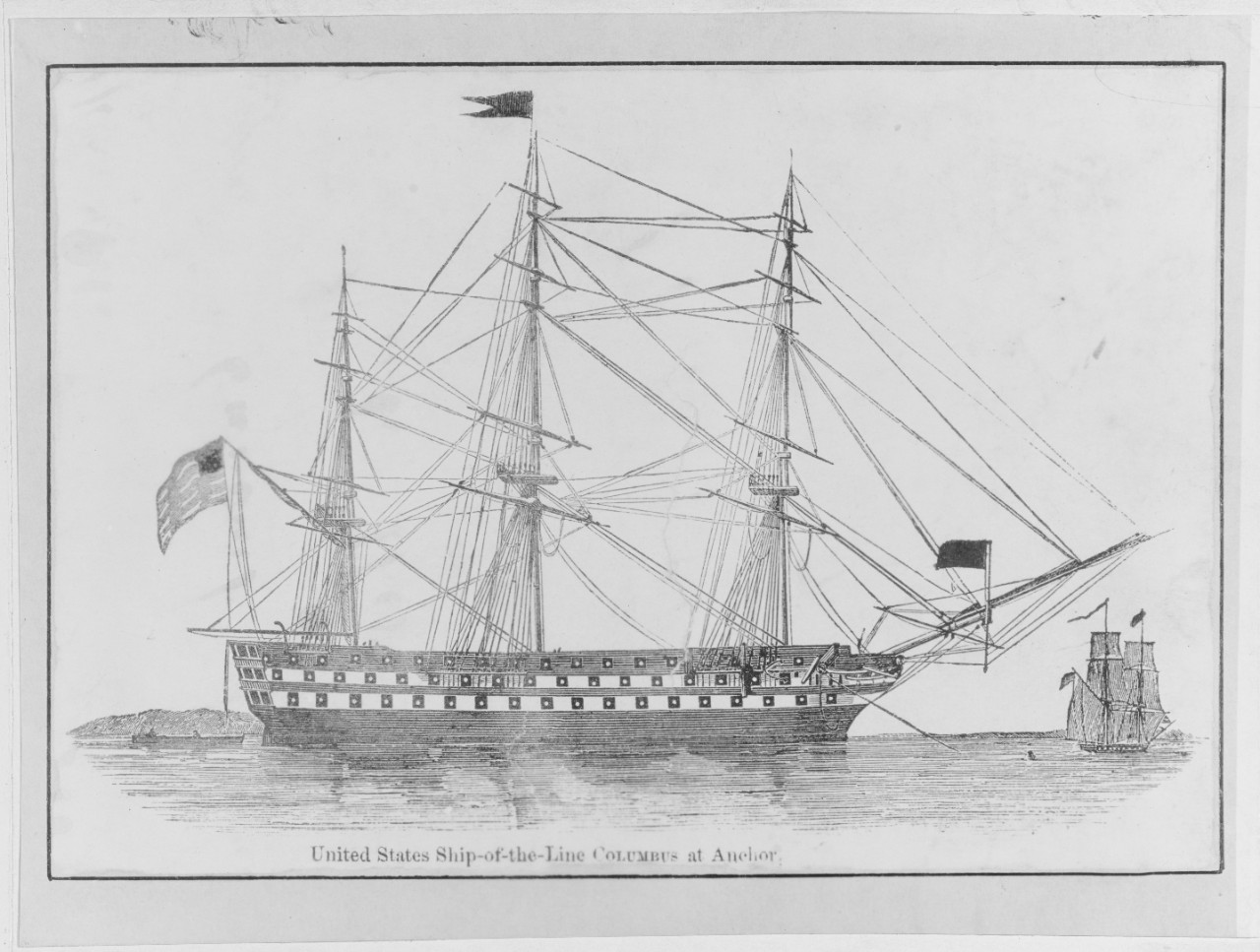 This picture represents the ship-of-the-line Columbus at anchor. She was launched March 1, 1819, in the Washington Navy Yard and commissioned September 7, 1819, with Master Commandant John H. Elton in command. 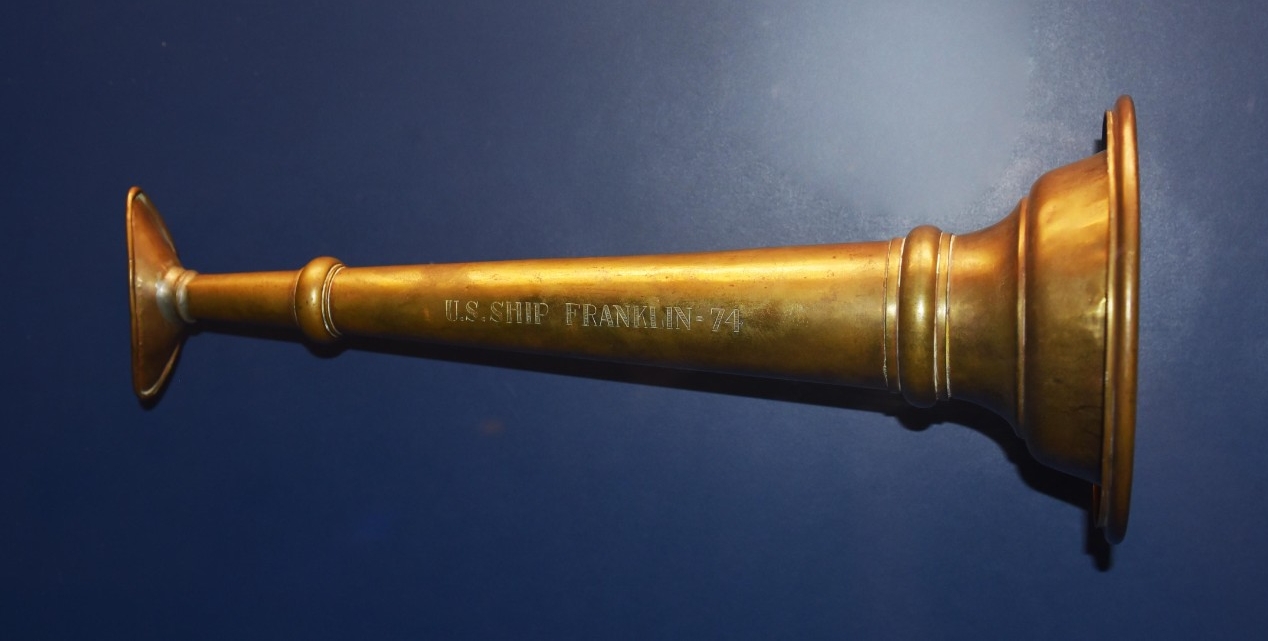 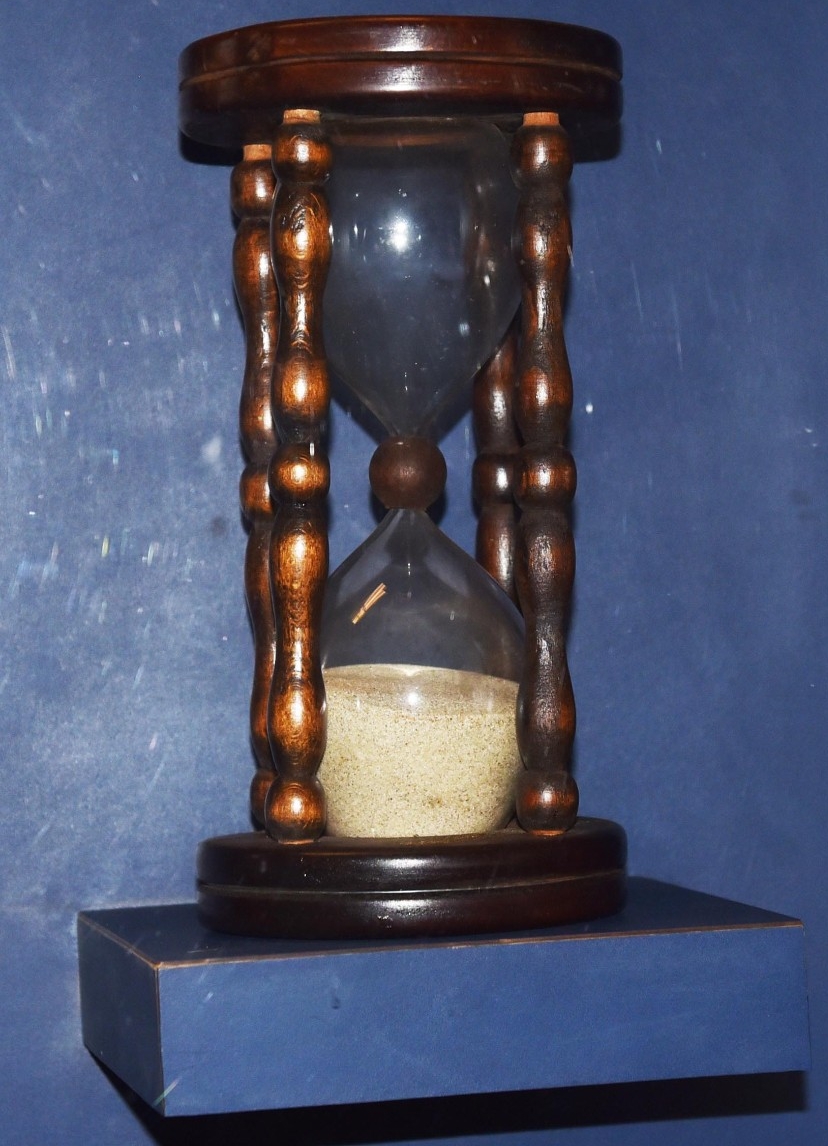 This hourglass and brass speaking trumpet were used onboard the Franklin built one year after the end of the war under the supervision of Samuel Humphreys and Charles Penrose.

These artfiacts are located in the Constitution Gun Deck area in The Forgotten Wars of the 19th Century display area in Building 76.

Eight days after the Treaty of Ghent with England was ratified, President Madison recommended a war with Algiers, which Congress duly declared on March 2, 1815. A force of ten ships was dispatched under the command of Commodores Stephen Decatur. The war brought to an end the American practice of paying tribute to the pirate states. This war was the fifth war in support of American seaborne commerce and another sufficient evidence of the importance of a stronger navy in the life of the young country.

Stephen Decatur presented this sword to Commodore John Downes for the important role he played during the defeat of the frigate Mashouda during the conflict with Algeria.

This artifact is located in The Forgotten Wars of the 19th Century exhibit at Building 76.

The War of 1812 in American History

The War of 1812 is probably one of the least known wars in American history. This is partly because no great figure like George Washington or Ulysses Grant emerged to put his stamp on the war; Andrew Jackson never attained a place in the first rank of national heroes. The obscurity of the causes and consequences of the war is another explanation; in the Treaty of Ghent, nothing suggests that America had achieved her aims. The lack of obvious victory may best explain why the war is so little remembered.

But we shouldn’t forget that this war was an important turning point in the history of the young republic. It concluded a quarter of a century of troubled diplomacy with Europe; it broke the power of American Indians; it stimulated American nationalism and encourage the expansionism that lay at the heart of American foreign policy for the rest of the century.