British naval strategy in the War of 1812 rested on a blockade of American ports; there U.S. warships and privateers could not attack the thousands of British merchant vessels then at sea. At first pro-British New England was ignored, but by late 1813 every major U.S. port was closed. Without ships-of-the-line the U.S. could not directly challenge British squadrons; escape in darkness or bad weather was the only option. By the end of the war, American warships and privateers were all but barred from entering or leaving U.S. ports. 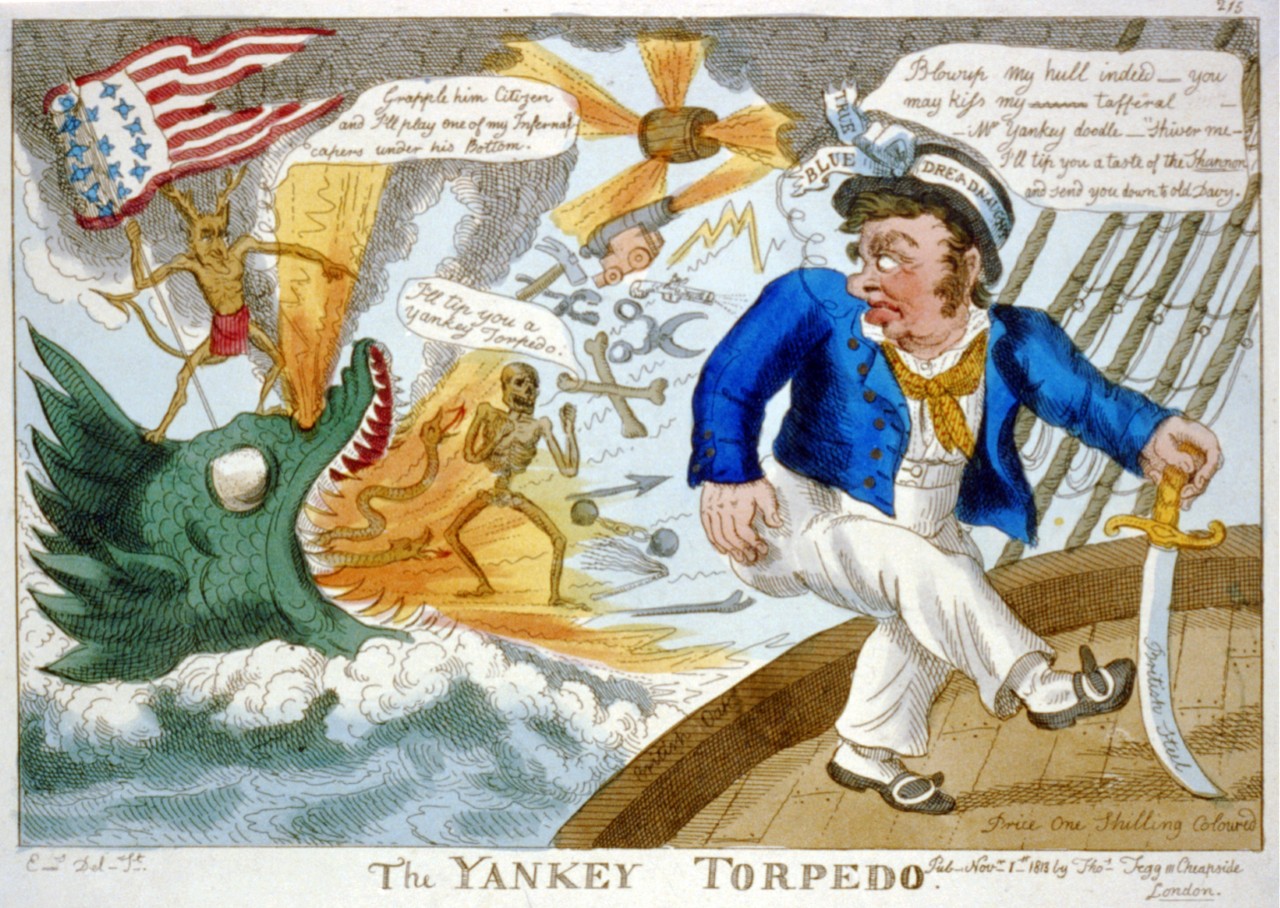 The Yankey Torpedo  Courtesy of the Library of Congress, LC-USZC2-604 Color 1813.

Cartoon Text: Demon with flag: “Grapple him citizen and I’ll play one of my infernal capers under his bottom,” Skeleton: “I’ll tip you a yankey torpedo,” British seaman: “Blown up my hull indeed_you may kiss my _ tafferal (the back end of a ship).  Mr. Yankey doodle_Shiver me_I’ll tip you a taste of the Shannon and send you down to old Davy.”

This cartoon was made in response to attempts by Americans to destroy blockading British vessels by means of “torpedoes”; today known as sea mines. Public opinion considered such forms of warfare less than honorable, and the torpedo is depicted here as something demonic. The British seaman is a very patriotic image – including a reference to the leading political party in English on his hat – and he mocks the threat, referring to the British Navy’s recent victory over an American frigate. Despite their notoriety, torpedoes remained ineffective at discouraging the Royal Navy during the war.

Dartmoor prison, England, was established in 1809 to hold French prisoners of the Napoleonic Wars. In 1813, American prisoners of war – initially held in old ships – began being confined there as well; swelling to 6,000 men by 1815. In the crowded and inadequate quarters outbreaks of smallpox and pneumonia killed 250 men. Much reformed, the prison remains in use today. 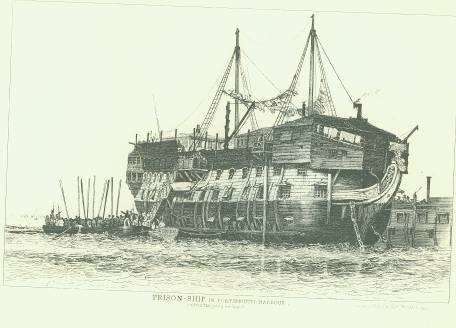 Prisoner ships, such as this, were made from dismasted ships. These hulks were used when the jails had become overloaded. Conditions inside the hulks were far worse than the prisons on land due to overcrowding and poor hygiene, which allowed typhus and dysentery spread like wildfire. The quality of food was as low as possible to keep down costs. 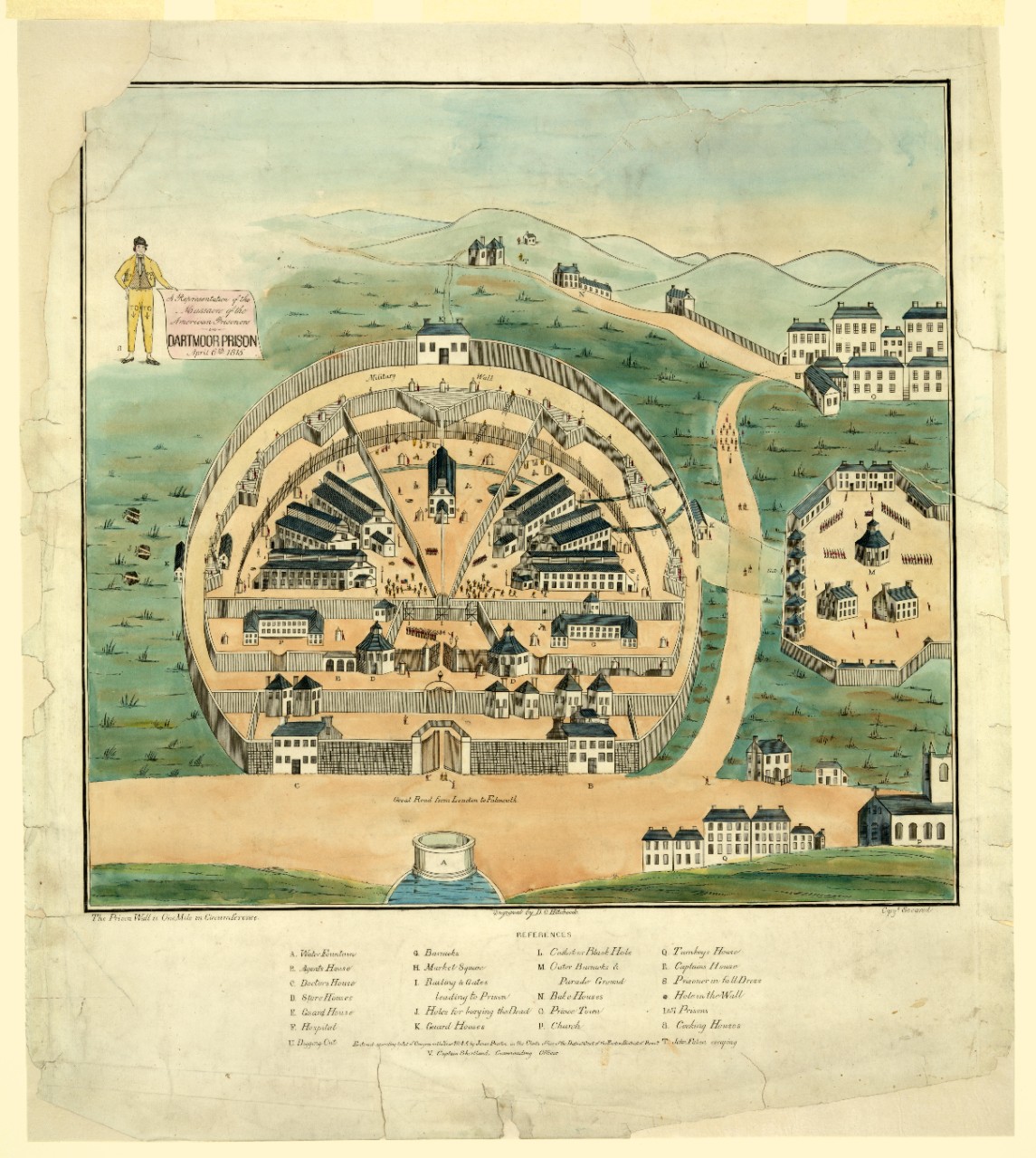 A Representation of the Massacre of American prisoners in Dartmoor Prison, April 6, 1815.   Courtesy of the Library of Congress, LC-DIG-PGA-03832.

Even though war had ended, delays in transportation to America prolonged the imprisonment of soldiers and sailors. Tensions among the captives rose and a riot ensued after prisoners playing in the yard lost their ball over the wall. When the guards refused to throw it back, the prisoners started digging into the wall to retrieve the ball. Fearing a mass breakout, the commander of Dartmoor ordered the prisoners into the compound and told his men to fire on them. 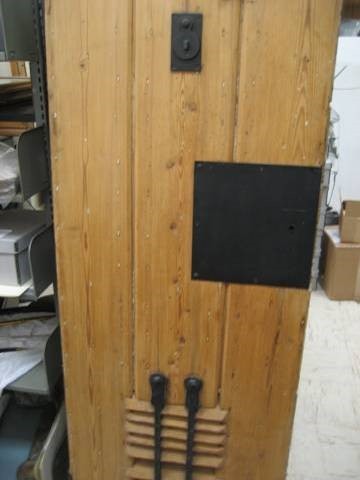 Door from one of the seven prisoner barracks at Dartmoor Prison. 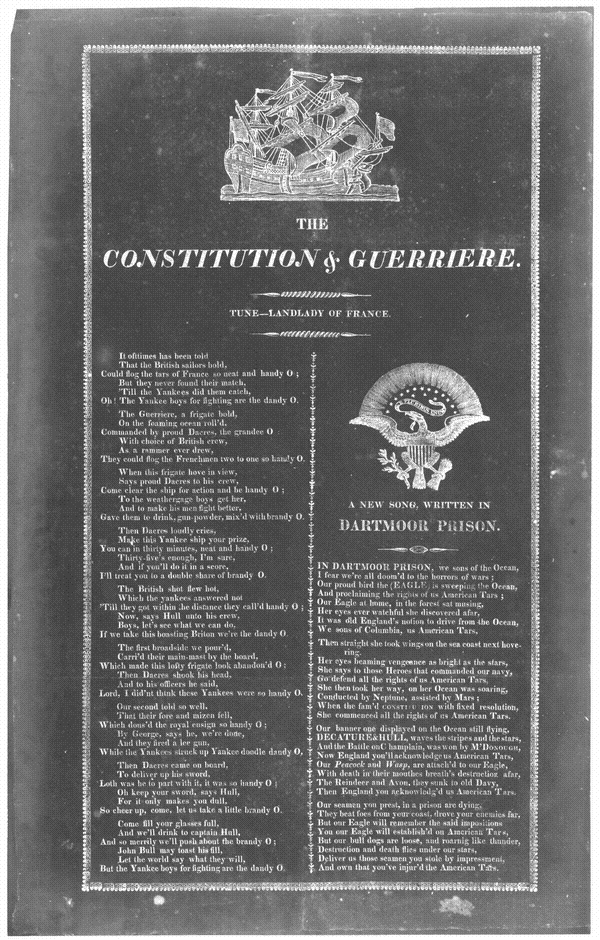 This song written by Dartmoor prisoners celebrates the victories of the Constitution and other U.S. Navy vessels while condemning impressment.

Letter written by Perez Drinkwater, lieutenant of the privateer schooner Lucy which was captured in late 1813, to his wife.

Dear Sally -
This same place is one of the most retched in this habited world . . . neither wind nor water tight, it is situated on the top of a high hill and is so high that it either rains, hails or snows almost the year round for further particulars of my present unhappy situation, of my strong house, and my creeping friends which are without number. . . .I am compelled to smuggle this out of prison for they will not allow us to write to our friends if they can help it. . . . So I must conclude with telling you that I am not alone for there is almost 5,000 of us heir, and creepers a 1000 to one. . .Give my Brothers my advice that is to beware of coming to this retched place for no tongue can tell what the sufferings are heir till they have a trial of it. So I must conclude with wishing you all well so God bless you all. This is from your even [ever] derr and beloved Husband.
Perez Drinkwater, Jun.

Courtesy of the American Merchant Marine at War website.

During the War of 1812 many African Americans sailors were captured and sent to Dartmoor prison. By 1814 they accounted for eighteen percent of the prisoners. These men were all placed in barrack number four. Each barrack established its own form of self rule to handle daily interactions. The concentration of the African Americans sailors into one barrack allowed them to create distinctly black styles and have autonomous self rule and near equal status with the white sailors. 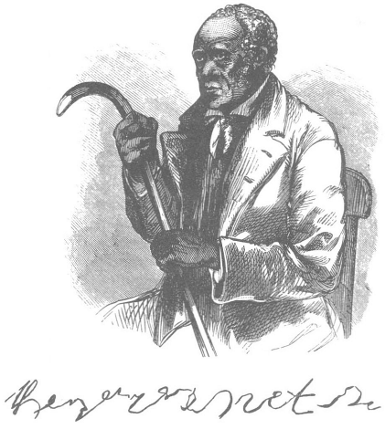 Henry Van Meter at 95 years old.  Van Meter was a crew member on the privateer Lawrence when she was captured in 1814. He was sent to Dartmoor prison and was there during the 1815 massacre.

Considering the forces engaged, the Battle of Fayal was the most desperate, bloody, heroic, and romantic naval fight that ever occurred on the seas.

On September 26, 1814, the privateer brig General Armstrong was anchored in the Bay of Horta, off the Island of Fayal, in the Portuguese Azores. Later that afternoon, the British vessels Plantagenet, Rota, and Carnation, appeared in the bay. Captain Robert Lloyd, the commander of the British squadron, saw an opportunity to quickly take the pesky American commerce raider and add another vessel to his squadron. That evening, Carnation deployed small vessels armed with cannon, swivel guns, and blunderbusses to attack General Armstrong. Captain Samuel C. Reid gave the order to fire and the British vessels retreated.
Around midnight, twelve small British vessels again approached General Armstrong and attempted to board her, the officer shouting “Fire and board, my lads” but they were again repelled by the Americans, suffering high losses. Over 300 British sailors were killed or wounded, while the Americans suffered only two dead and seven wounded. The next day British forces renewed their attack. After puncturing the brig’s hull, Captain Reid and his men scuttled General Armstrong, and went ashore. Later, the British took the ship; however when they discovered it had been scuttled they set it on fire. 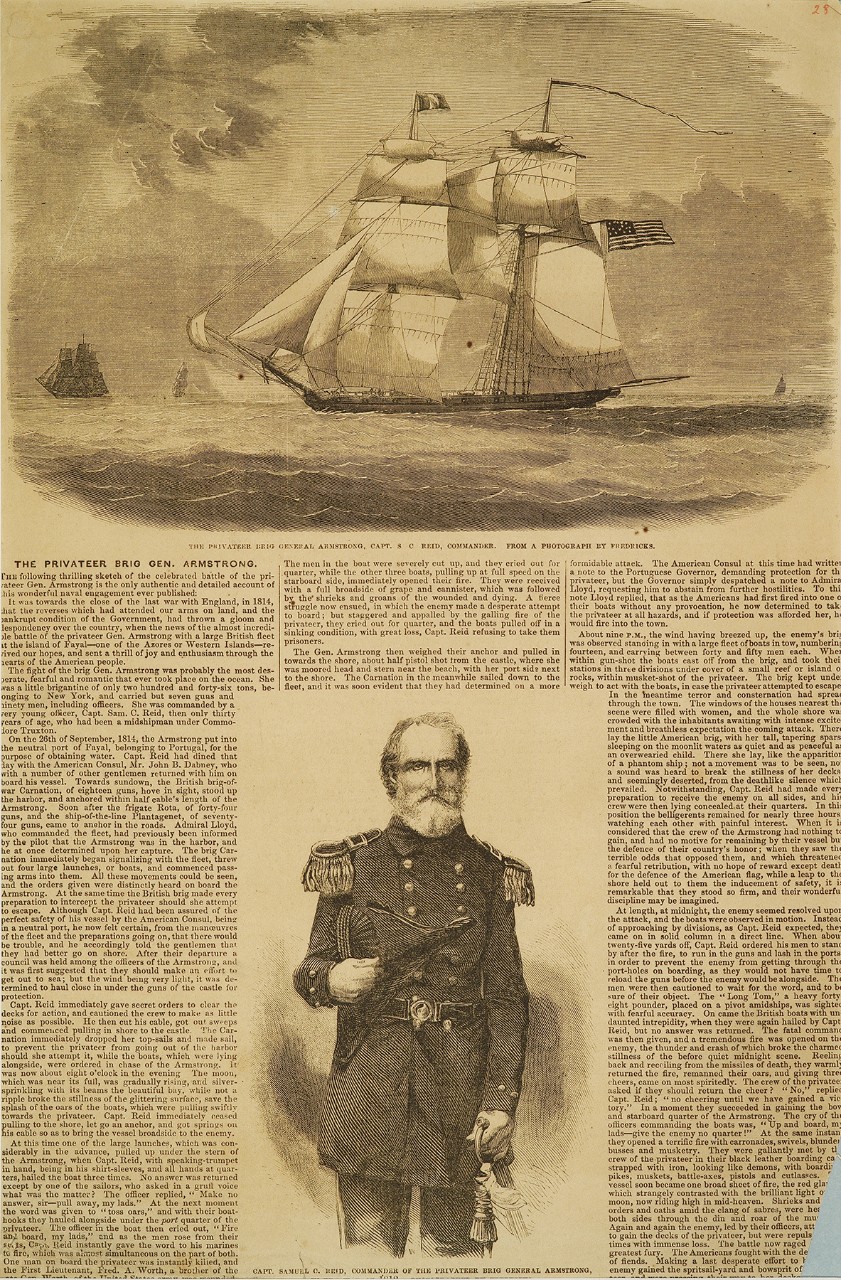 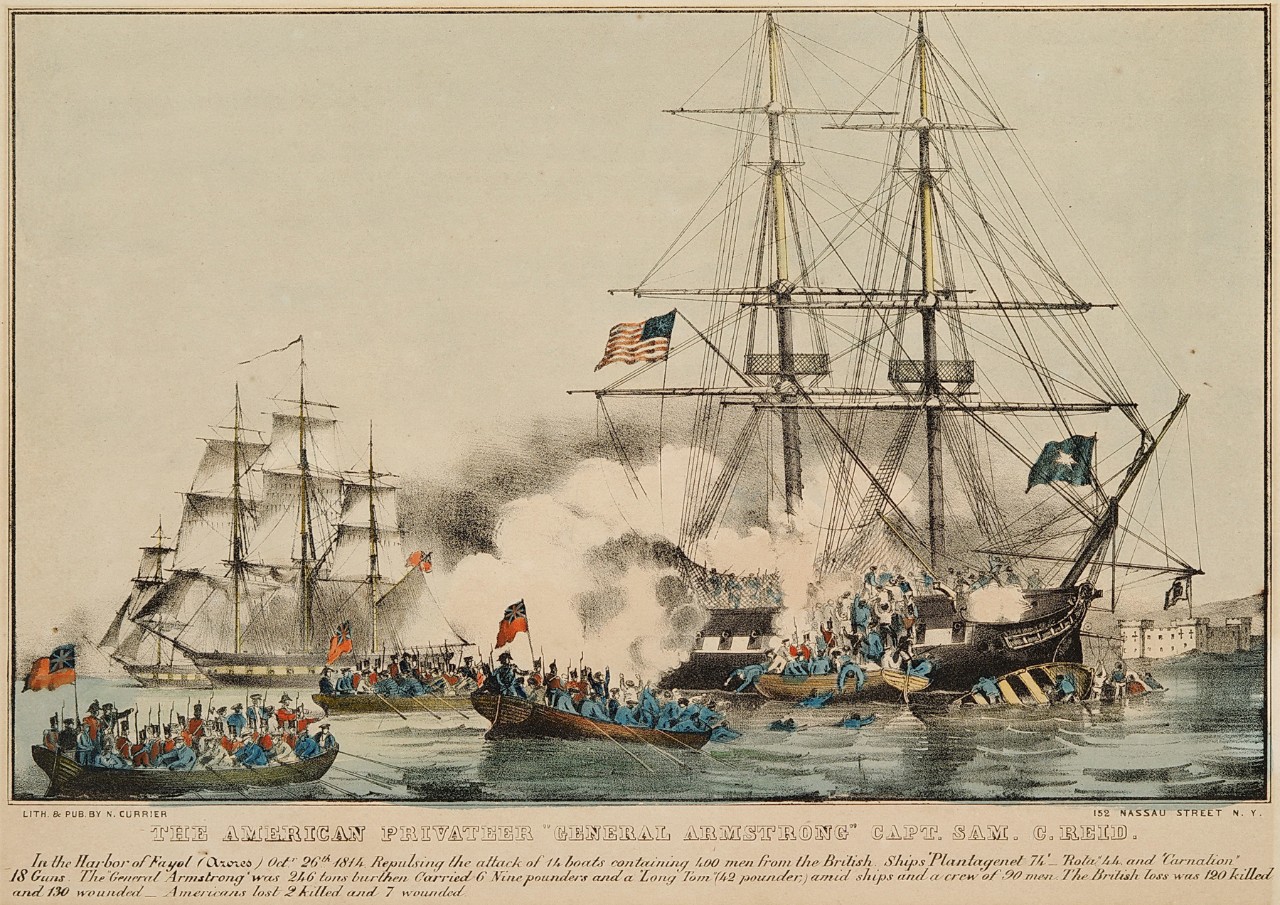 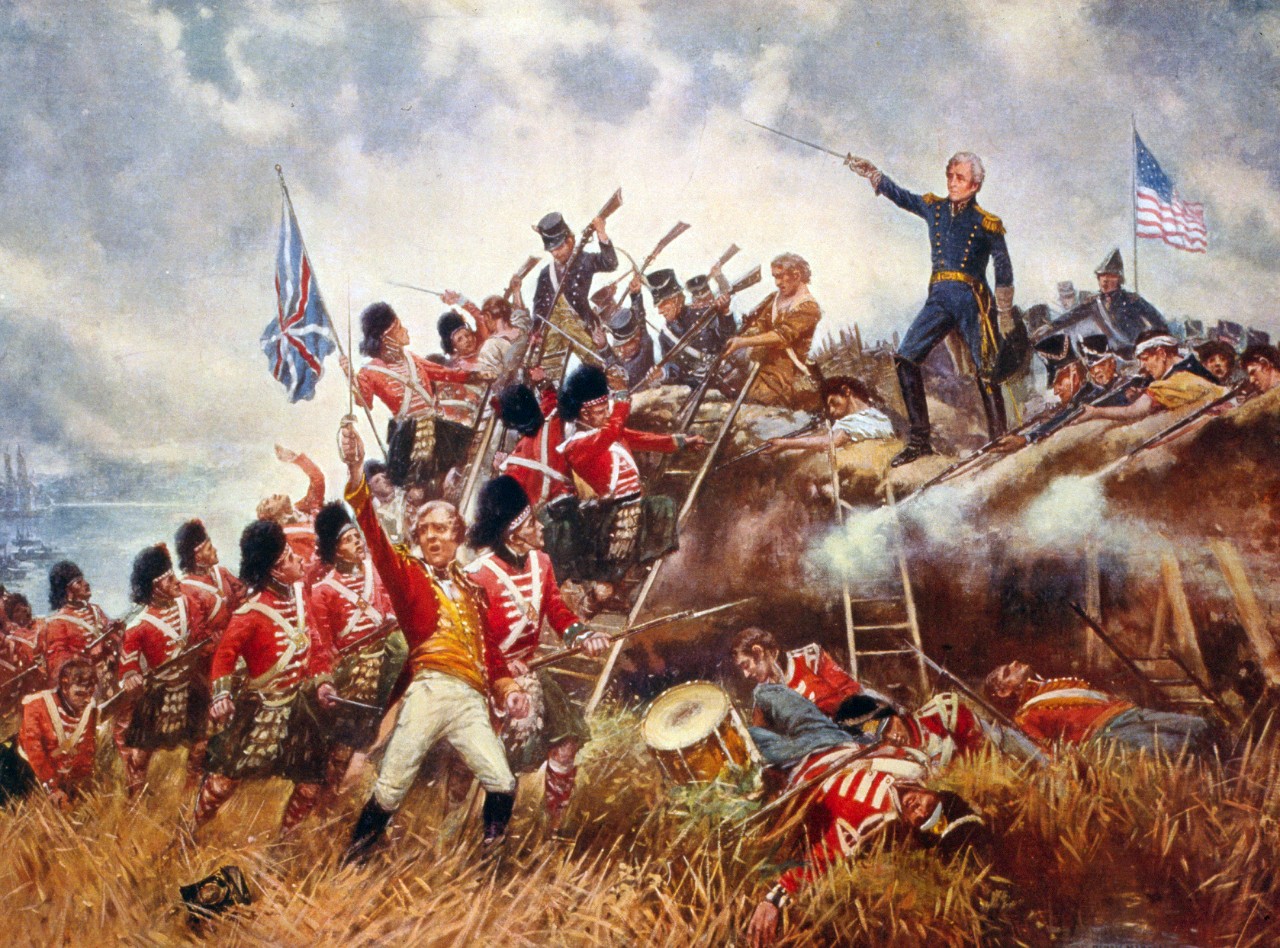 General Armstrong actions delayed British ships in arriving to New Orleans on time.   This artwork by E. Percy Moran shows Andrew Jackson in front of the American flag with sword. 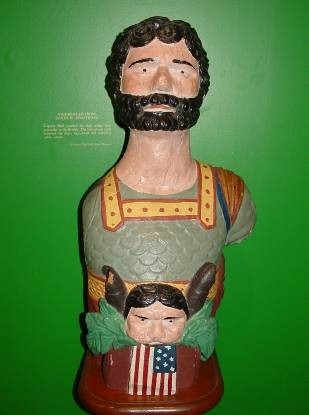 Although the Americans put up a strong fight, Captain Reid realized that he and his crew needed to escape to shore. After removing the sick and wounded, the Americans fired cannon shots through their own brig to prevent the British from using it. Before the vessel was scuttled the boatswain’s mate was able to remove the figurehead and carry it safely to shore. This artifact is now located at the U.S. Naval Academy Museum. 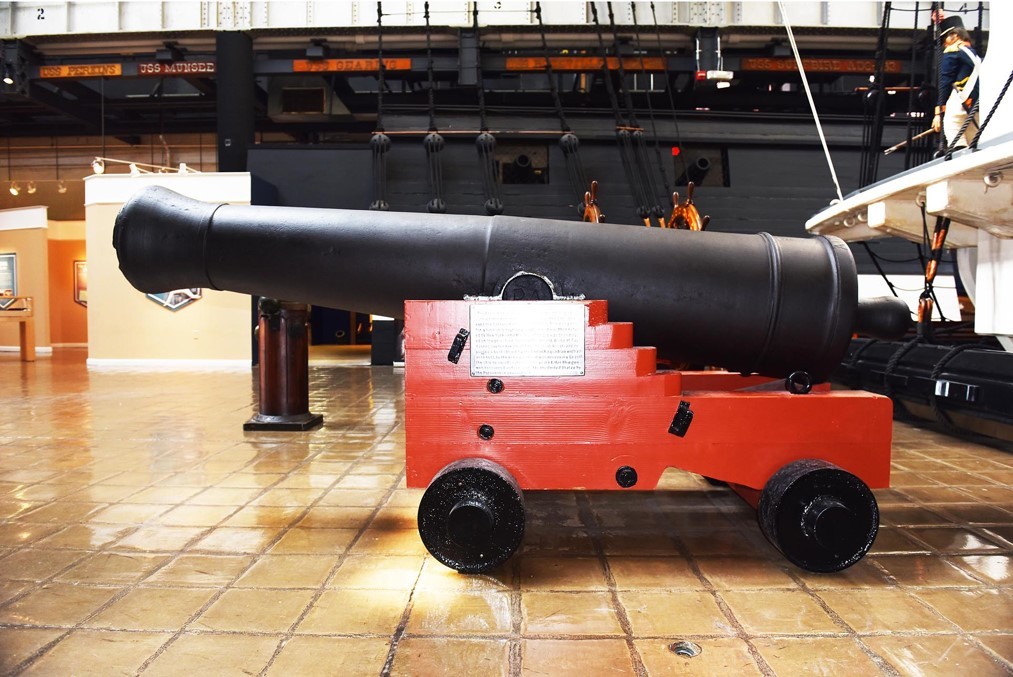 This 42 pound cannon, known as the Long Tom, was mounted on General Armstrong during the Battle of Fayal. After the battle, the Portuguese government retrieved the gun from the bottom of the bay and mounted it on Fort Santa Cruz in Horta. 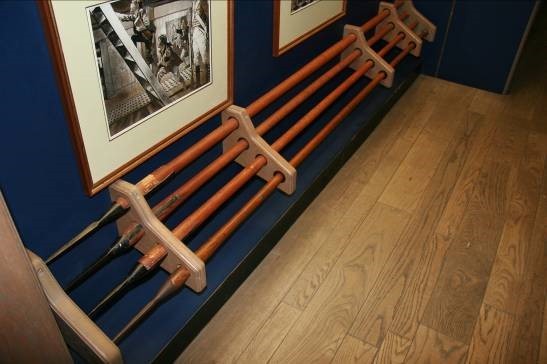 Boarding pikes similar to these would have been used by the crew of General Armstrong to repel the British sailors attempting to board their brig during the Battle of Fayal.