Factual Detail Prior to Explosion

6. FACTUAL DETAILS PRIOR TO EXPLOSION: That the pertinent details just prior to the explosion were as follows:

a. HISTORY OF THE QUINAULT VICTORY:

(1) The QUINAULT VICTORY was a new vessel of the Victory type, owned by the War Shipping Administration (U.S. Government) and operated by the United States Lines Company. The officers and crew were competent. No unusual difficulties had been experienced either with personnel or equipment from the time of her delivery by the builders on 11 July 1944 at Portland, Oregon, up to the time of the explosion.

(2) A loading permit had been requested and obtained in the routine manner.

(3) Just prior to the mooring at Port Chicago about 1800, 17 July 1944, a partial load of fuel was taken aboard at the Shell Oil Company's Martinez refinery, and the normal practice would involve sluicing of this oil to other tanks for the ensuing 24 hours. Some of the oil taken aboard was of a type that released light hydrocarbon gas on agitation, heating, or standing. This could have resulted in formation of an explosive mixture in the confined air space above the oil in the tanks.

(4) Prior to being sent to Martinez and Port Chicago, a pre-loading inspection was made by the Port Director's officers and the Captain of the Port's office, and no defects noted.

(5) Some difficulty was experienced in mooring at Port Chicago because of wind and tide. Just prior to the explosion the engine was turning over slowly.

(6) Just after arrival, the Port Chicago personnel had commenced rigging the ship for loading, and all hatches except No. 5 were about ready to load at the time of the explosion. This was the first time this vessel had been rigged for loading. Trouble was experienced with shackles and preventer guys as they were non-standard. Whips on some of the winches were on backwards and had to be corrected.

(7) Loading should have started by midnight. Dunnage and loaded cars were spotted on the pier for this purpose.

(8) On arrival at Port Chicago, both the loading officer and his assistants visited the ship, gave copies of pertinent magazine orders to the master, inspected some of the holds and saw the ship being properly rigged for loading. no. 5 hold was not being rigged as it was not to be loaded that night.

(1) The E. A. BRYAN was a new vessel of the Liberty type owned by the War Shipping Administration (U.S. Government) and operated by the Oliver J. Olson Company. There were no complaints against the officers or crew. The ship had been put in service in February 1944, had made one trans-Pacific trip, had undergone voyage repairs and had been inspected for readiness for loading by the operators, Port Director, and Captain of the Port prior to being sent to Port Chicago, and no defects noted.

(2) A full load of fuel oil was taken at Standard Oil Company's Richmond plant. This oil had passed Navy inspection and was gas free.

(3) A loading permit had been requested an obtained in the routine manner.

(4) The ship moored at Port Chicago about 0815, 13 July 1944, commenced loading at about 1000, and loaded continuously night and day until the explosion. On arrival, the usual boarding call was made and pertinent magazine orders delivered to the master.

(5) All aspects of loading were routine and normal up to the time of the explosion, with the exception of minor repairs to winches.

(6) At the time of the explosion, the following cargo was in or being loaded into the various holds:

e. CONDITIONS ON THE PIER:

(1) The night was dark (no moon), clear and cool. Wind was force 1 to 2 from the southwest. Tide had been flooding for one hour.

(2) The E. A. BRYAN was moored starboard side to, headed west at the inboard berth.

(3) The QUINAULT VICTORY was moored starboard side to, headed east at the outboard berth.

(4) The fire barge was moored at the outer end of the pier. 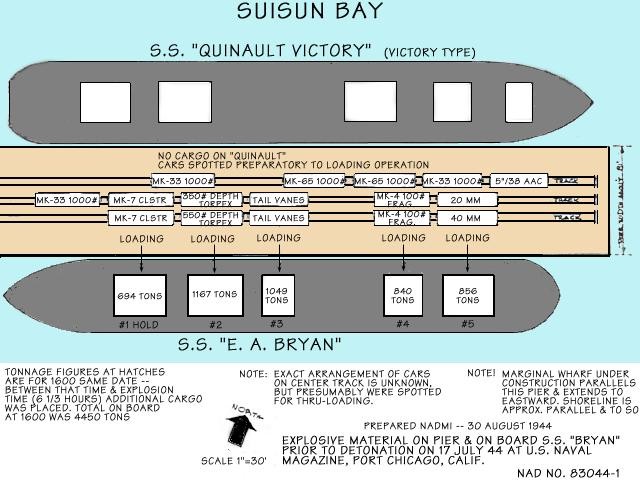 Exhibit No. 74 showing there were 16 cars on the pier spotted and loaded.

A locomotive was on the pier. It was off the pier a few minutes before the explosion.

(6) Explosive cars spotted for the QUINAULT VICTORY contained the following:

(7) Explosive cars spotted for the E. A. BRYAN contained the following:

(9) The pier was well lighted, and when the officer-in-charge, loading officer, and assistant loading officer were last on the pier, less than one-half hour before the explosion, operations were proceeding in a normal routine manner. The sergeant of the guard and the sentry patrol found the pier sentry alert and conditions normal about this time.

(10) An unusual noise described as a metallic sound and rending timbers, such as made by a falling boom, was heard coming from the direction of the pier immediately before the first flash.

(1) Ninety-eight enlisted men of the third division were engaged in loading the E. A. BRYAN, about half of the men in the ship and half on the dock.

(2) One hundred and two enlisted men of the sixth division were rigging the QUINAULT VICTORY for loading.

(4) A part of the officers and crew of both vessels totaling 67, were on board.

(5) A part of the Armed Guard detail of both vessels, comprising one officer and 29 enlisted men, were on board.

(8) A train crew of three civil service employees was working on the pier.