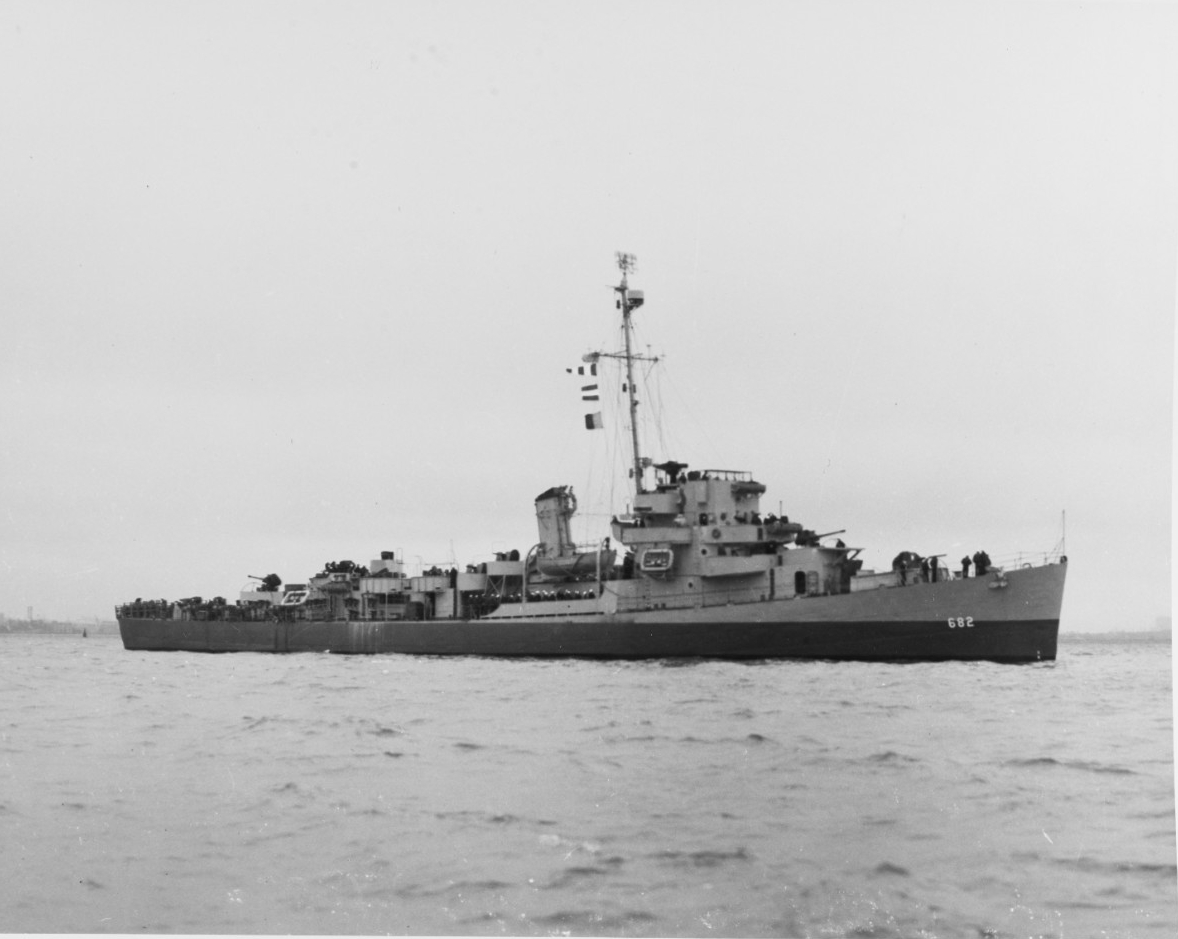 Samuel Jackson Underhill, born on 25 August 1917 at Jericho, N.Y., received a bachelor of science from Yale University and attended Harvard Law School before enlisting in the Naval Reserve as a seaman 2d class on 8 November 1940. After serving briefly at Floyd Bennett Field, Brooklyn, N.Y., Underhill was appointed an aviation cadet and was transferred on 6 February 1941 to the Naval Air Station, Jacksonville, Fla., for flight training. He subsequently underwent further training at Miami; was designated a naval aviator on 15 July; and was commissioned an ensign in the Naval Reserve on 6 August. Following advanced flight training at Norfolk, he reported to Scouting Squadron (VS) 5.

In May 1942, when Rear Admiral Frank Jack Fletcher's Task Force 17 steamed in the Coral Sea seeking to foil Japan's attempt to extend her influence southward, Underhill was with VS-5 on board carrier Yorktown (CV-5). He flew his Dauntless dive-bomber when VS-5 raided Tulagi on the morning of 4 May. On the morning of the 7th, a coordinated attack group of 17 SBD's from VS-5 took off from Yorktown and, in clear skies with unlimited visibility, launched a dive bombing attack on Japanese small carrier Shoho. The American planes scored nine direct hits and two near misses that sent the hapless enemy flattop to the bottom.

On the 8th, the two naval forces at last found one another and the stage was set for the first great naval action between aircraft carriers, the Battle of the Coral Sea. On the morning of 8 May,Yorktown launched the SBD's of VS-5, dividing the group to accomplish separate missions. One division joined in the attack on Japanese carrier Shokaku and, diving from 17,000 feet through broken cloud cover, dropped bombs which bent the enemy carrier's deck sufficientlyto prevent the launching of her aircraft. As the bombers pulled out, Japanese fighter planes swarmed out to repell them but were fought off by the Americans.

Later that morning, dive bombers of VS-5 conducted anti-torpedo plane patrol around Yorktown's formation. Pressed into service due to the lack of fighters, the slower Dauntless dive-bombers were at a disadvantage with the Japanese attackers. At 1110, eight of the American bombers intercepted and engaged a group of about 17 Japanese fighter planes, shot down six of the enemy and damaged seven more. When the fierce action was over, Ens. Underhill was numbered among those lost in the fight to protect the carrier. He was posthumously awarded the Navy Cross for his extraordinary heroism.

Following shakedown out of Bermuda, the new escort vessel got underway from Boston on 17 January 1944; arrived at Guantanamo on the 22d; and reported to Commander Caribbean Sea Frontier for duty. She operated out of Trinidad and Guantanamo escorting convoys until late in May when she escorted George Washington from Kingston, Jamaica, to Miami.

Following repairs and alterations at Boston and training exercises in Casco Bay, Maine, Underhill got underway before dawn on Independence Day and steamed from Hampton Roads to screen UGS 47, a large, slow convoy bound for Mediterranean ports. Underhill conducted battle drills and investigated sonar contacts during the long, uneventful Atlantic voyage. In the Mediterranean on the 21st and 22d, she responded to several air raid warnings, but no enemy actionmaterialized, although the last three convoys to pass along this route had been attacked by German planes. As she entered the inner harbor at Bizerte on the 24th, the destroyer escort struck a submerged object, which badly damaged her port propeller and shaft, and prompted her to head for Oran the following day. After arriving at that port on 27 July, she underwent temporary repairs; then, on 5 August, departed North Africa. Early on the 6th, she joined the escort of Convoy GUS 47, with which she arrived safely at New York on 18 August. Six days later, Lt. Cmdr. Robert M. Newcomb relieved Lt. Cmdr. Jackson as commanding officer of the destroyer escort.

During the remainder of 1944, Underhill continued Atlantic convoy escort duties. In September, she conducted UGS 54 to Plymouth, England, and, late in October, returned with a group of tank landing ships. She escorted Convoy UGS 60 from Boston to Mers elKebir in November; then engaged in antisubmarine warfare exercises out of Oran with French submarine Doris. She departed that Algerian port on 3 December escorting GUS 60 and reached New York on the 21st.

She left New York on 9 January 1945 for a temporary assignment with Submarine Forces, Atlantic. Operating out of New London, she served as a training and escort ship for submarines; took part in exercises in Block Island Sound and Long Island Sound; and trained intensively in antisubmarine warfare.

On 8 February 1945, she departed from New London and rendezvoused with HMS Patroller to escort the British escort carrier to the Canal Zone. Underhill then steamed, via the Panama Canal, the Galapagos, and Bora Bora, to the Admiralties and arrived at Seeadler Harbor on 15 March 1945.

During the next three months, she escorted convoys among the Philippines, the Admiralties, and ports on the coast of New Guinea. In mid-July 1945, she arrived at Okinawa for eight days of antisubmarine patrol duty in nearby waters. On the 22nd, she departed the Ryukyus as the largest and lead ship in the screen for a convoy of seven tank landing ships and a merchant ship carrying the battle-weary soldiers of the 96th Division to Leyte.

On the morning of 24 July 1945, the discovery of a distant Japanese plane alerted the convoy. However, the snooper never approached closer than 10 miles and, within half an hour, disappeared from view. Subsequent events suggested that this plane had been fathering information on the convoy and reporting the ata to nearby submarines.

Early that afternoon, Underhill made sound contact with an unidentified object whose lack of movement seemed to indicate that it was not a submarine. Moments later, her lookouts sighted a mine directly in the path of the convoy only 25 yards away, and Lt. Cmdr. Newcomb quickly warned his charges to change course to avoid it. As the convoy steamed clear of the lethal object, the destroyer escort attempted to sink the mine by gunfire; but, despite direct hits, the mine neither exploded nor sank.

Meanwhile, the sonar contact had begun to look more promising, and Newcomb ordered submarine chaser PC-804 to investigate. The PC dropped depth charges which brought a submarine to periscope depth. On board Underhill, the word went out to "stand by to ram," but, when the submarine went deep, the order was changed to "prepare for depth charge attack." The concussion of the exploding depth charges shook the ship; and dark, oily, debris-filled water bubbled to thesurface where the submarine had been.

Almost immediately, lookouts sighted the periscopes of two more submarines on collision courses with the ship. Again the word was passed to stand by to ram. Throughout the ship, men braced themselves for the expected collision. Then, two jolts shook the ship. Almost immediately, they were followed by two violent explosions, caused by one, or perhaps two, kaiten, Japanese midget suicide submarines. The explosions, which severed the ship in two at the forward fire room, flung a tremendous quantity of oily water over the still floating aft section of the unlucky Underhill, knocking down men and washing some overboard, but also dousing possible fires in that portion of the ship. Guns mounted forward were blown aft, and it soon became apparent that the bridge and mast had been blown off. Soon, survivors on the floating after section of the ship began to realize the extent of the damage.

Although hampered in their rescue efforts by the necessity to pursue sound contacts and by alarms over real and imagined periscope sightings, PC-803 and PC-804 quickly came to the aid of survivors in the water and on the slowly sinking aft section. On board Underhill, the wounded were brought to the boat and main decks. The survivors displayed fine training and discipline as they calmly and efficiently went about their individual tasks, aiding the injured and attempting to control the damage. Of the 238 men on board Underhill when she struck the midget submarines, only 125 survived. Among the dead was her commanding officer, Lt. Cmdr. Robert M. Newcomb, who had been with the ship since her commissioning.

Shortly after 1800, the last of the survivors was removed from the floating section which had been listing to port and slowly sinking. The hulk was then sunk by 3-inch and 40-millimeter fire from the patrol craft.

Underhill's name was stricken from the Navy Register on 1 September 1945.