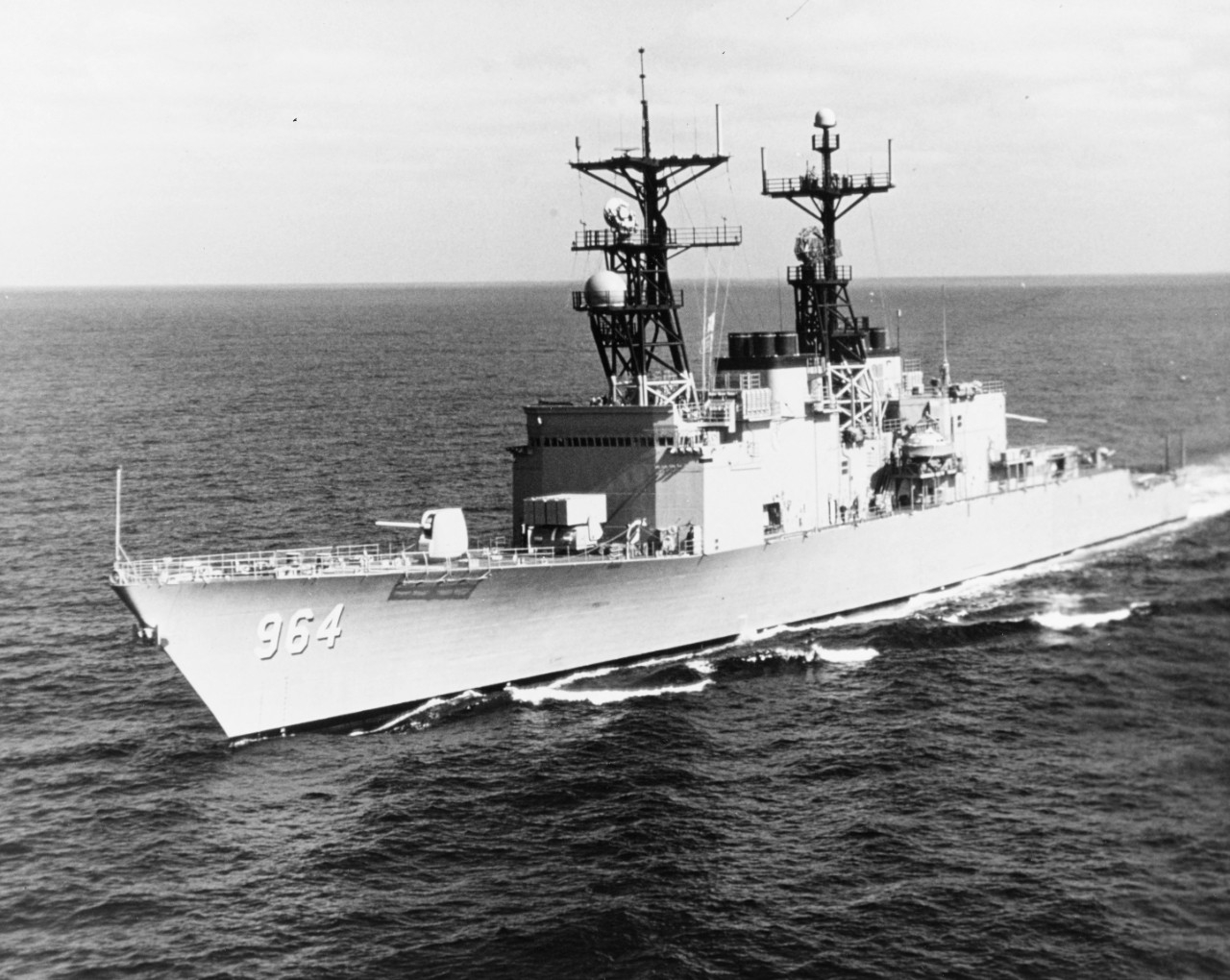 Appointed to the U.S. Naval Academy, Paul Frederick Foster graduated with the class of 1911 and commissioned as an ensign. Upon graduation, he received orders to cruiser Washington (CA-11), serving until December of that year, when he was transferred to the newly commissioned battleship Utah (BB-31). While serving on board Utah, he participated in the Mexican Campaign and was awarded the Congressional Medal of Honor for “Distinguished conduct in battle engagements of Vera Cruz (21-22 April 1914), fighting at the head of his company, Ensign Foster was eminent and conspicuous in his conduct, leading his men with skill and courage.” While commanding AL-2 (SS-41), Lt. Cmdr. Foster received the Distinguished Service Medal for “exceptionally meritorious service in a duty of great responsibility in an encounter with an enemy submarine (UB-65) on 10 July 1918, in which the enemy submarine was sunk.” In January 1924, Lt. Cmdr. Foster received orders to Philadelphia to assist in fitting out light cruiser Trenton (CL-11), serving on board as Engineer Officer upon the ship’s commissioning in April of that year. In January 1927, he received the Navy Cross for extraordinary heroism in the aftermath of a turret explosion on board Trenton.  Lt. Cmdr. Foster became the first man to receive all three of the Navy’s highest awards. Recalled to active duty in 1941 (after resigning his commission in March 1927), Admiral Foster served on the Navy Inspector General’s Staff during World War II, conducting three major inspections at the personal direction of President Franklin D. Roosevelt. In June 1954, Admiral Foster joined the staff of the Atomic Energy Commission as special assistant to the General Manager for International Activities. Later appointed to the International Atomic Energy Agency in Vienna, Austria, with the rank of Ambassador, Adm. Foster served in the position until 1961. He died in 1972 in Virginia Beach, Va., at the age of 83. 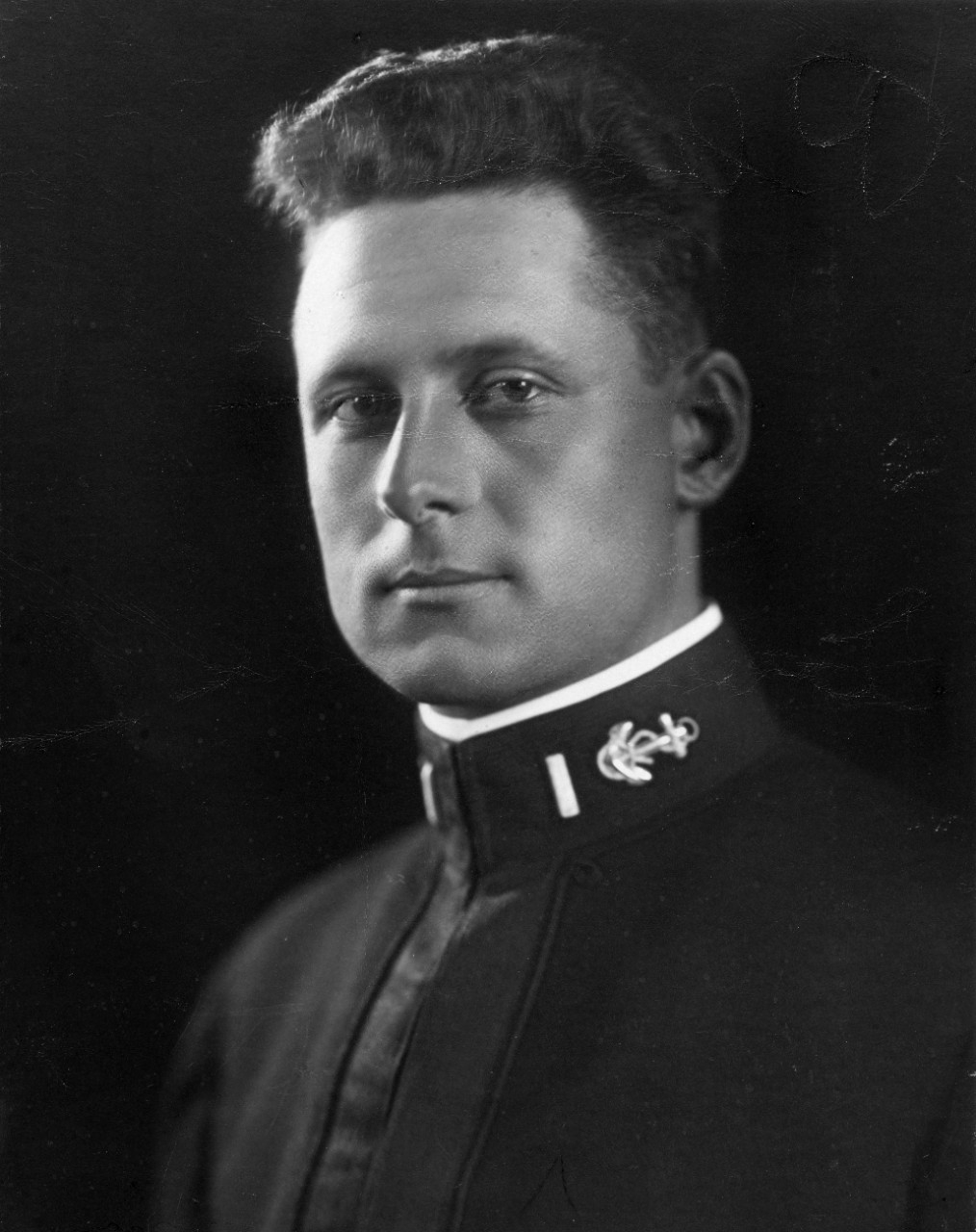 Paul F. Foster steamed to Long Beach Naval Shipyard for a regular overhaul (30 September-31 December 1980). Assigned to Destroyer Squadron (DesRon) 23 after completion of the first such overhaul by a Spruance-class destroyer, she made way for her new homeport at San Diego.

Getting underway on 30 April 1982, Paul F. Foster left San Diego for a Western Pacific (WestPac) cruise to the Indian Ocean. On 30 May, she crossed into the Southern Hemisphere and held ceremonies with King Neptunus Rex. After port visits in Oman (4-8 July) and Pakistan (25-28 July), the destroyer returned to her homeport in San Diego (17 October).

On 7 January 1983, Paul F. Foster arrived to her new homeport at Long Beach, and entered dry dock four days later for replacement of waste heat boilers and replaced all steam auxiliary equipment with (except galley and laundry) electrical equipment. Leaving dry dock on 13 March, she began workups off San Diego through the end of the year.

Deploying for a WestPac cruise on 28 August 1984, Paul F. Foster participated in operational exercises with the Royal Australian and New Zealand navies (SANDGROPER 84), as well as with the Japanese Maritime Self Defense Force (ASWEX 85-IJA). She also participated in FLEETEX 85, operations alongside three carrier battle groups. Paul F. Foster returned to her homeport at Long Beach on 20 December.

During a WestPac deployment in 1987, Paul F. Foster received a Meritorious Unit Commendation while part of Battle Group Charlie, Northern Pacific Group, operating “during extreme cold weather operations” (16 January-2 February) in the Northern Pacific. Both airmanship and seamanship were tested yet safely conducted amidst blinding snowstorms, freezing temperatures, and twenty-foot seas. She completed the deployment on 6 February.

Getting underway for a six-month deployment on 24 February-24 August 1989, the destroyer conducted READIEX-89 (25 February-7 March) and a PASSEX alongside the Royal Australian Navy (06-07 July). 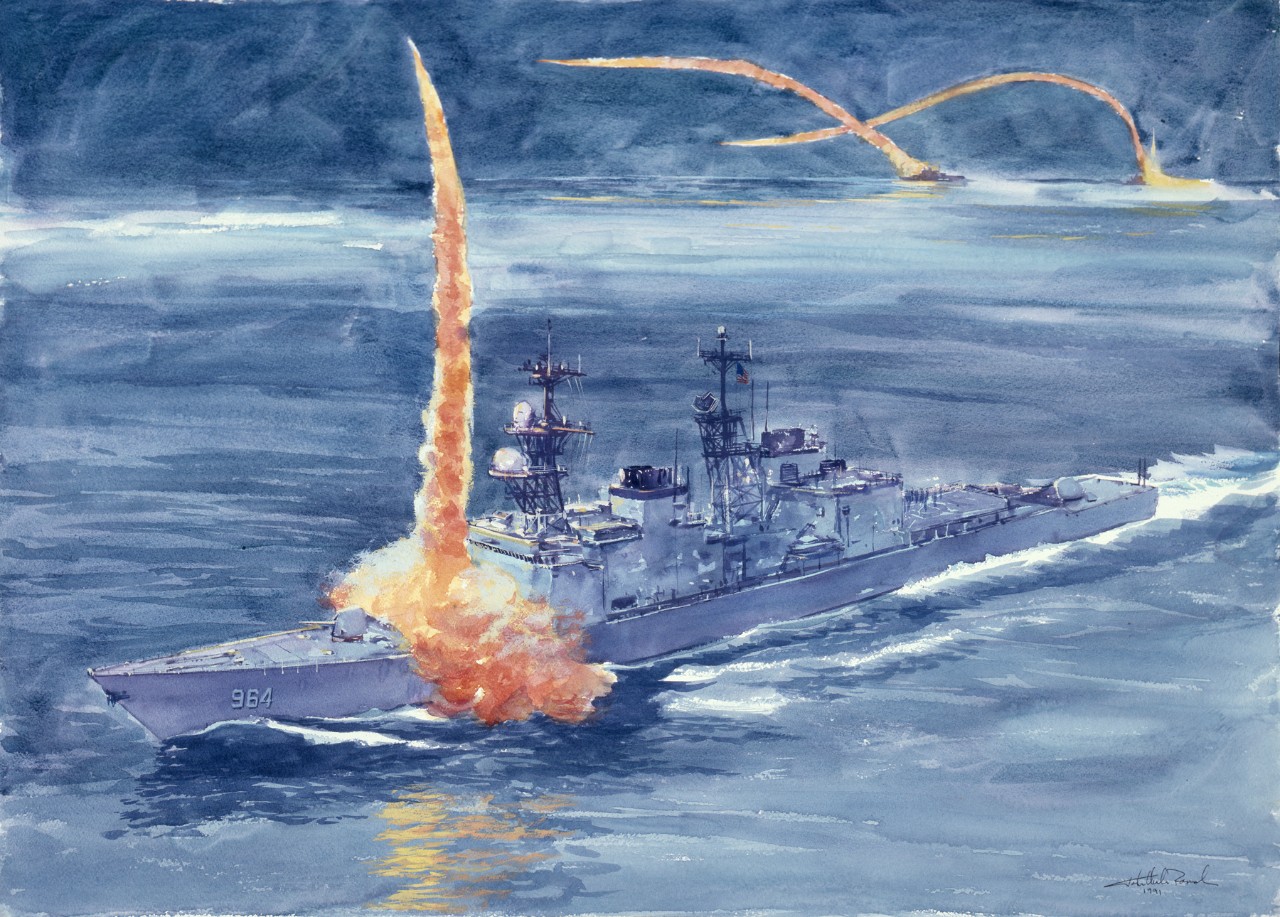 Paul Foster (DD-964), Missouri (BB-63) and Bunker Hill (CG-52) on the horizon at 3 a.m. fire off the first missiles in the opening round of the Iraqi war. Described by one of the junior officers, “It looked like Roman candle going off on the horizon as the missiles arced over on their way to Iraqi.” Painting, watercolor on paper; by John Charles Roach; 1991; framed dimensions 34H X 39W. Accession#: 92-007-J. 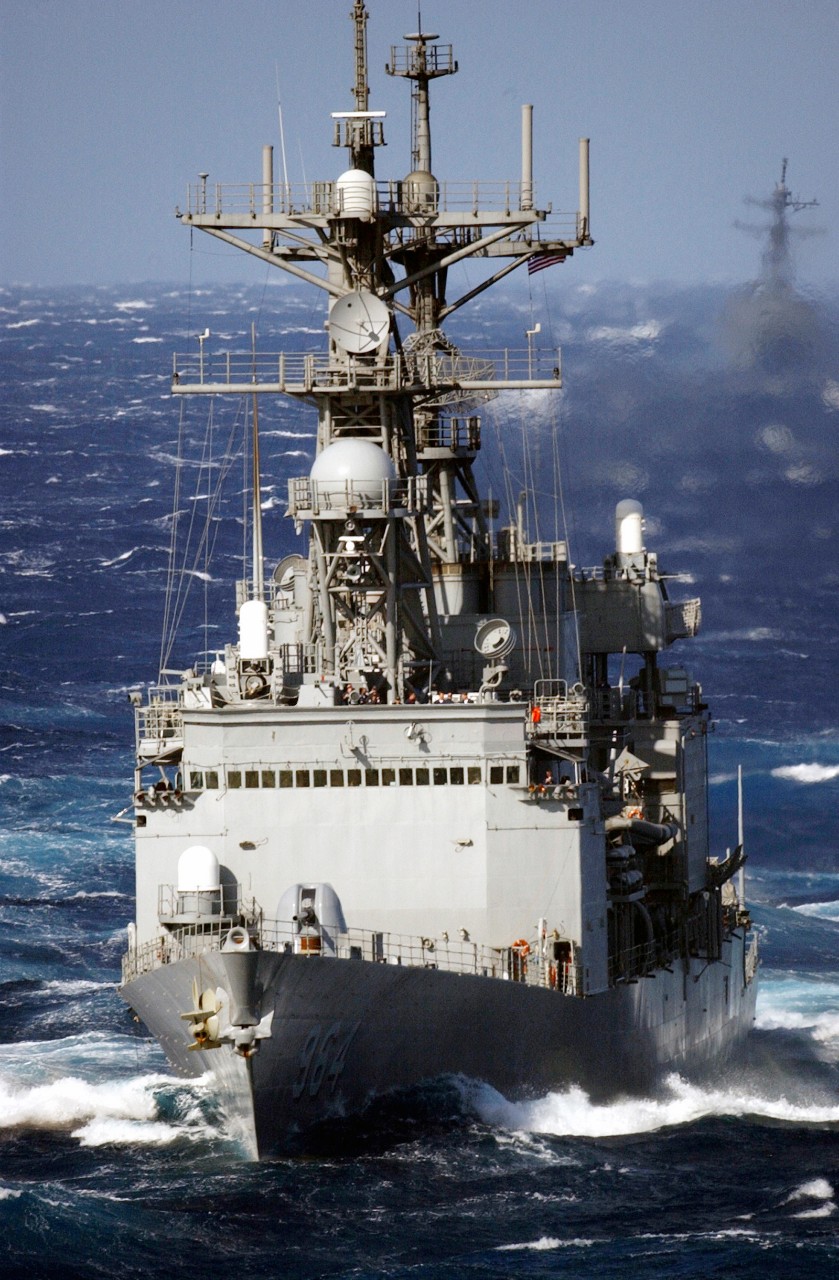 On 20 June 1993, Paul F. Foster deployed for her eighth deployment to the Arabian Gulf, spending the majority of the next three months patrolling alongside carrier Ranger (CV-61). The destroyer later steamed for home at the end of the year, spending the holidays in Hong Kong.

Upon her return to the Persian Gulf in July 1994, Paul F. Foster conducted Exercise GULFEX XXV in the Central Arabian Gulf. On 30 September 1995, she officially changed homeports from Long Beach to Everett, Wash., despite physically remaining in Long Beach. In May 1997, Paul F. Foster operated alongside the Constellation (CV-64) Battle Group during FLEETEX 97-1, before suffering a casualty to her starboard shaft on 2 May. Proceeding to Jebel Ali, workers completed repairs to her shaft eight days later.

On 4 February 1999, Paul F. Foster steamed in company with Hewitt (DD-966) and Rodney M. Davis (FFG-60) to Hong Kong, People’s Republic of China, arriving on 19 February. On 14 March, the destroyer chopped to the U.S. Fifth Fleet and conducted a transit of the Straits of Hormuz. She participated in EAGER SENTRY 99 alongside Kuwaiti and British ships (10-11 April), focusing on littoral defense and tactical maneuvering.

During a RIMPAC exercise on 10 July 2002, Paul F. Foster fired 30 rounds from her two 5-inch guns and one defensive missile, helping to sink decommissioned fast frigate Harold E. Holt (FF-1074). On 24 November, Paul F. Foster became the first U.S. Navy vessel in a year to make a port call to China, after China and the United States blamed one another for an April 2001 aircraft collision between a U.S. signals intelligence aircraft and a Chinese fighter aircraft over the South China Sea.

Decommissioned on 14 March 2003, ex-Paul F. Foster was turned over 13 days later to Naval Surface Warfare Center, Port Hueneme Division, as the U.S. Navy’s new Self Defense Test Ship (SDTS). The only ship of her class still in existence, the destroyer featured in three episodes of popular television show NCIS, and appeared in the 1980 feature-film “The Final Countdown,” as part of the Nimitz (CVN-68) Battle Group, before the carrier went back in time to 1941 Pearl Harbor.