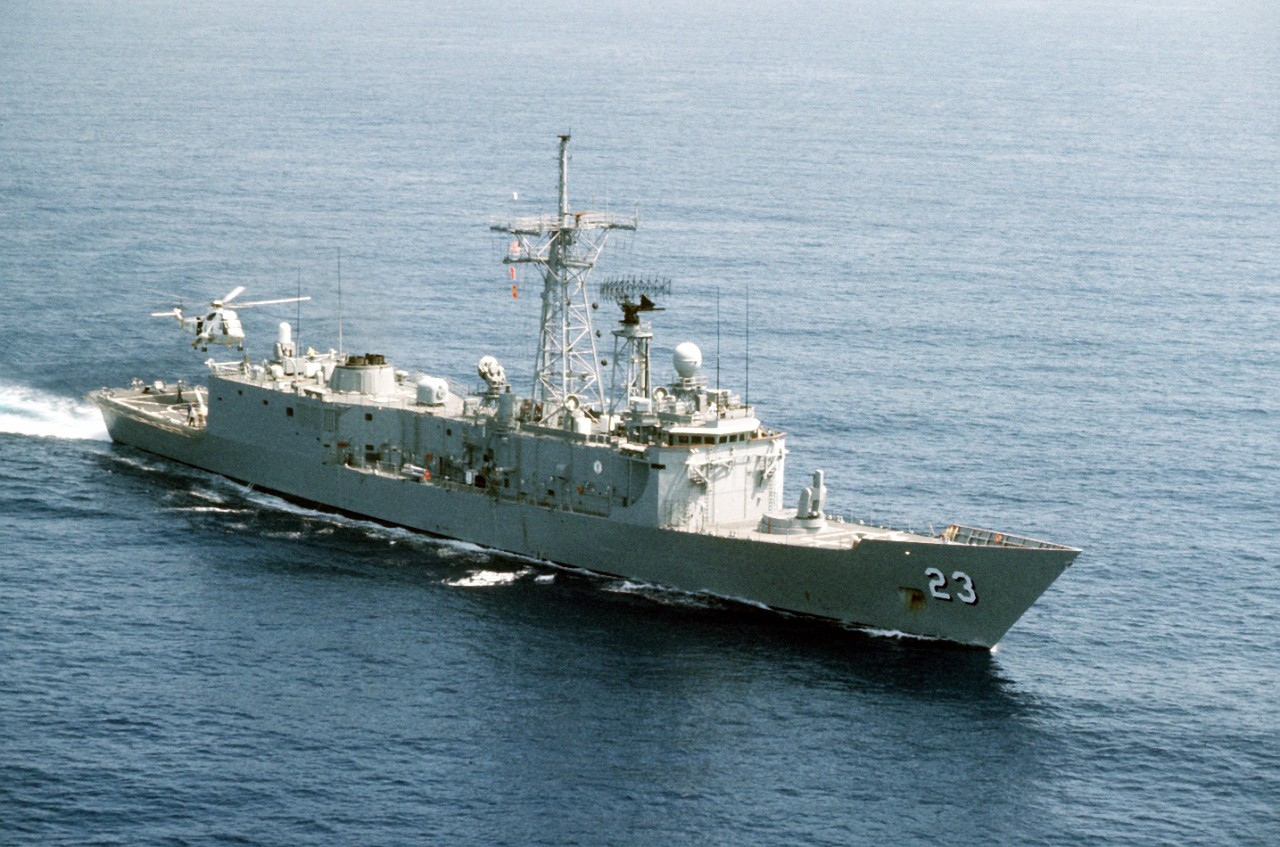 Lewis Burwell “Chesty” Puller was born on 26 June 1898, in West Point, Va. After entering the Virginia Military Institute, Lexington, Va., in 1917, Puller dropped out in August 1918 to join the U.S. Marine Corps and fight in Europe. However, World War I ended three months later, before the eager young officer could enter combat. Puller would go on to serve for 37 years, including combat commands in both World War II and the Korean War. The most decorated Marine in U.S. history, Puller earned five Navy Cross awards (the most by a Marine) and one U.S. Army Distinguished Service Cross. Lt. Gen. Puller died on 11 October 1971, at the age of 73. 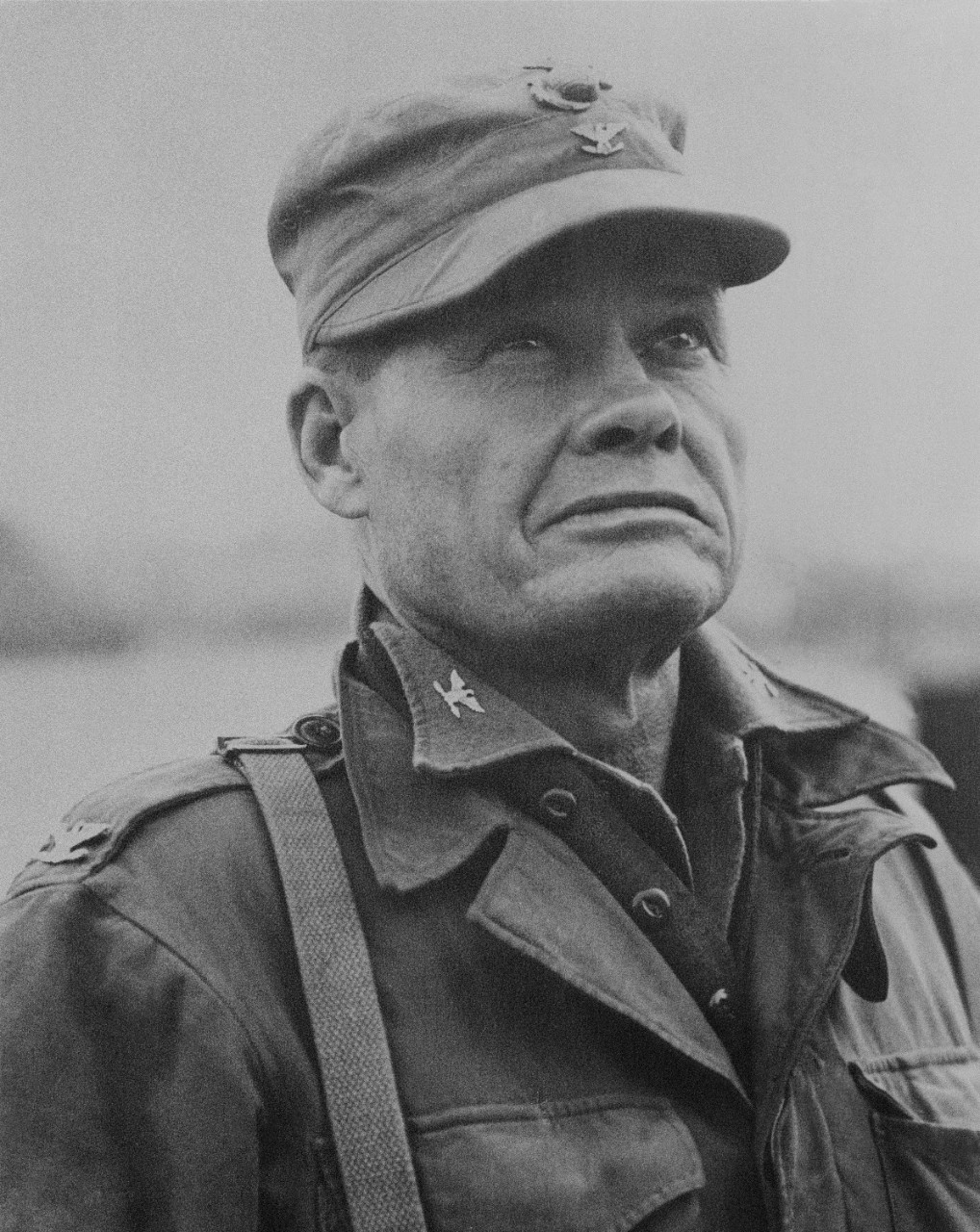 The guided missile frigate Lewis B. Puller was laid down on 23 May 1979, at San Pedro, Calif., by the Todd Pacific Shipyard Corp.; launched on 15 March 1980 and sponsored by Mrs. Virginia M. Puller, wife of Lt. Gen. Puller; and commissioned on 17 April 1982, Cmdr. Ralph K. Martin in command.

Lewis B. Puller deployed to the Western Pacific and Indian Ocean with Battle Group (BG) Bravo, consisting of aircraft carrier Kitty Hawk (CV-63) (13 January–1 August 1984). The frigate participated in Team Spirit 84, a combined U.S. and Republic of Korea amphibious exercise. After the completion of Team Spirit 84, she made way for Subic Bay, Philippines, for eight days of liberty and upkeep (31 March–8 April). Steaming for the North Arabian Sea, she became only the second U.S. Navy warship to make a port visit to Bombay [Mumbai], India, since 1971 upon her arrival (21–24 May). 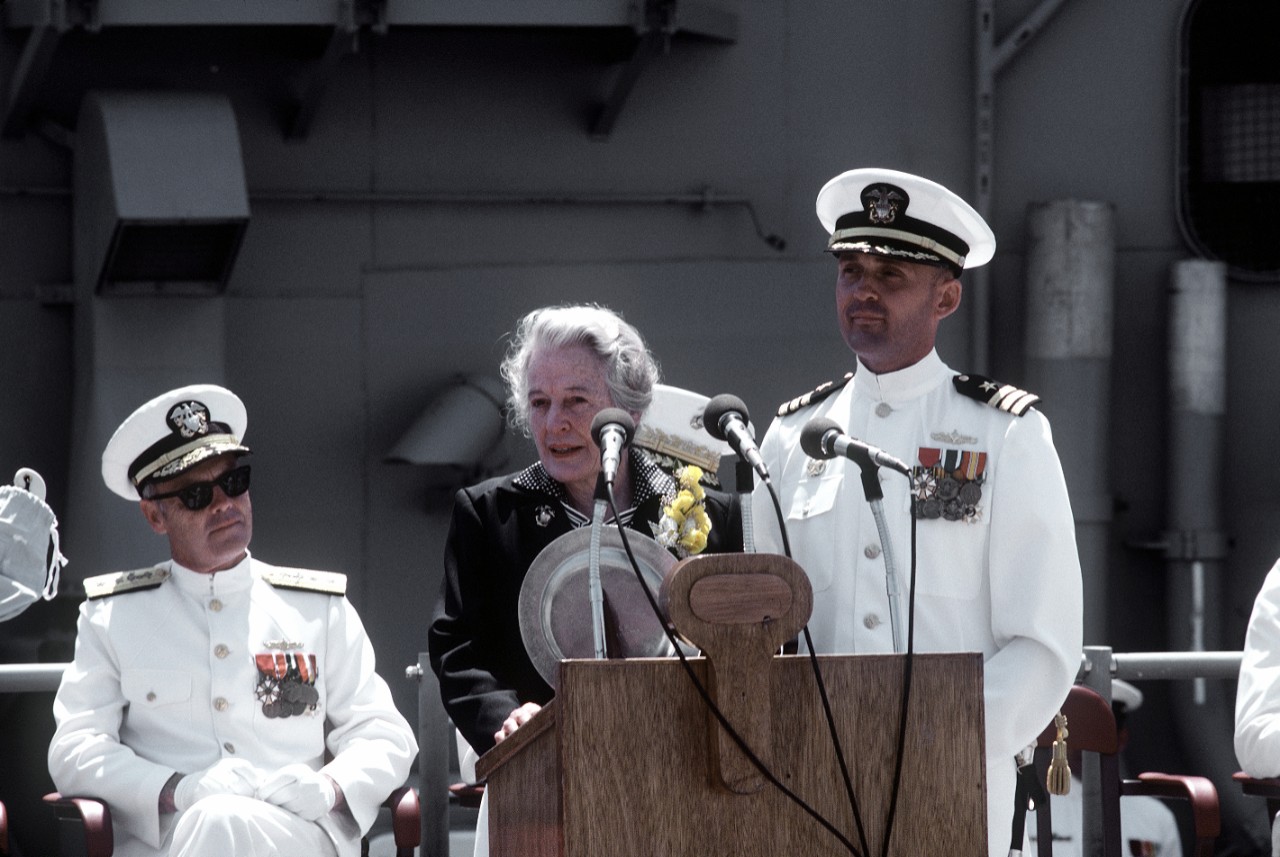 America (CV-66) and her escorts, including Lewis B. Puller, relieved BG Bravo in the North Arabian Sea (10 June 1986). Lewis B. Puller made way for Australia, crossing the equator and entering the realm of King Neptune’s Court (15 June). Returning to Subic Bay, she later stood out via Pearl Harbor, Hawaii (10–23 July), en route to San Diego (1 August). As part of the “Little Beaver Squadron” of Destroyer Squadron (DesRon) 23, Lewis B. Puller participated in the combined U.S.-Canadian exercise Marcot 2-84, off the Strait of Juan de Fuca (11–19 September). The frigate spent the rest of the year conducting underway training periods off San Pedro.

After accomplishing a holiday upkeep period in Long Beach, Lewis B. Puller began preparing for refresher training (13–17 January 1987). Following a series of further qualification tests, she conducted a missile firing exercise with Mahlon S. Tisdale (FFG-27) against supersonic drone targets (23–24 April). Lewis B. Puller steamed for Hawaii to participate in the Rim of the Pacific (Rimpac) 88 exercise, and made a port visit to Pearl Harbor (14–16 July). Departing from Hawaii, she made way for Vancouver, B.C., to conduct anti-submarine warfare (ASW) training (25–28 July). After participating in the annual Seattle Seafair activities in Seattle, Wash., (29 July–1 August), Lewis B. Puller returned to Long Beach (11 August).

Lewis B. Puller spent the next two months engaged in ASW training, off Esquimalt, B.C., and Anchorage, Alaska (24 September–5 October 1987). Following a port visit to Anchorage (13–16 October), the warship returned to Long Beach for fuel and provisions on the 22nd before steaming for exercise Kernal Usher 89-1 the next day. Lewis B. Puller, part of the Amphibious Transport Screening Group (ATSG), conducted mock battles with air, surface, and submarine units including units of the famed Sea, Air, and Land Teams (SEALs). After a port visit to Victoria, B.C., (2–4 December), the guided missile cruiser conducted a successful torpedo exercise (5–8 December) off Nanoose Bay before steaming back to Long Beach for the holiday season.

During several short underway periods off Long Beach in January–March 1988, Lewis B. Puller participated in ASW exercises. Making way from Long Beach in company with Duncan (FFG-10) on 17 April, the two vessels conducted a missile test at the Pacific Missile Test Center Range with Lewis B. Puller acting as tracker and backup missile shooter for Duncan. A misfire on board Lewis B. Puller the next day caused a good deal of excitement amongst the crew, and Cmdr. William H. Smith ordered the gunnery exercise rapidly cut short and the round disposed of. Without further incident, the seasoned vessel returned to Long Beach (20 April).

A port visit to Zihuatanejo, Mexico, marked the first such visit of a U.S. Navy ship to the small resort town, as well as the furthest point east in the Pacific that Lewis B. Puller ever steamed (5–9 June 1988). Throughout the months of July–August, she conducted workups for a five-week long Pacific Exercise (Pacex). Getting underway from Long Beach en route to Seattle, the frigate participated in the various drills for Pacex (11 September–20 November). Highlights of the exercise included Lewis B. Puller entering the Bering Sea for her first time (26 September). She also crossed the 180th meridian to enter the “Realm of the Golden Dragon” (2 October); rescued 23 crewmembers of the sinking South Korean freighter Pan Dynasty (3 October); and made a port visit to Sasebo, Japan, after completing Tandum Alley with Japanese and U.S. naval vessels (13–15 October).

Lewis B. Puller steamed from Long Beach to San Pedro, entering the yards for a short overhaul period (8 March–14 May 1990). Upon returning to Long Beach, the guided missile cruiser began conducting counter-narcotics operations to the south, aggressively prosecuting small craft in search of contraband off the Channel Islands and the Northwest Baja coast (4–18 October). She spent the remainder of the year in port at San Pedro.

As three tugs took Lewis B. Puller under tow from South West Marine Shipyard back to Long Beach, one of the tugs had a maneuvering problem and collided with the frigate (20 March 1992). The collision dented Lewis B. Puller’s hull and broke several welds forward on the port side. After receiving small repairs to her hull, she conducted a fast cruise, running several drills while at sea (1–17 April). During an underway period to Hawaii, the ship conducted “countless” drills for refresher training (8–14 May). Remaining in the Hawaiian area until late June, the crew readied for Rimpac 92. Operating with allied forces, including the Japanese and Australian navies, Lewis B. Puller performed ASW and escort roles during the exercise (11–18 July).

Fleet Exercise (Fleetex) 93-2B kicked off a busy year for Lewis B. Puller (16–21 March 1993). Two weeks later, she participated in Surface Warfare Training Week Long Beach (5–9 April). The frigate spent the next few months training off the Southern California operations area, including a transit to San Francisco to conduct an extensive evaluation and review of her counter-narcotics tactics and procedures with Joint Task Force Five and Coast Guard District Eleven. Lewis B. Puller spent the first week of September tasked as the Southern California ready duty counter-narcotics vessel, however, she did not deploy due to lack of suspect traffic (1–10 September). 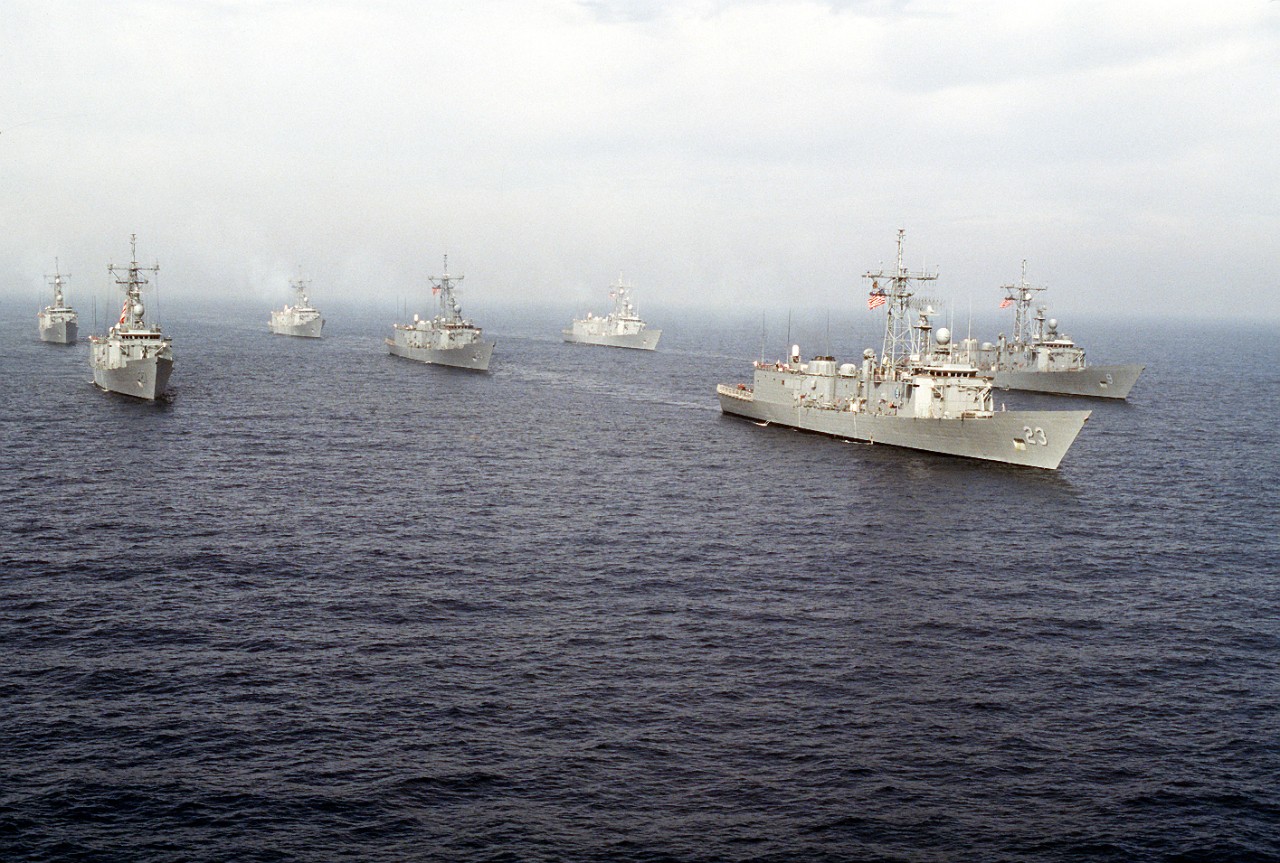 After performing a series of training events and tests while underway off the Southern California operating area in the first half of 1996, Lewis B. Puller made way for counter-narcotics operations in the Southeastern Pacific and Caribbean Theaters (22 April–10 August 1996). On 26 May, the ship conducted a boarding of the fishing vessel Marabella II, and discovered 4,000 pounds of marijuana. Seizing the contraband and five crewmembers, Lewis B. Puller arrived at NS Guantánamo Bay, Cuba, to transfer the prisoners and contraband to the United States Drug Enforcement Agency (DEA). During her underway period, she made port visits to Curacao, Netherland Antilles (30 May–2 June); Guantánamo Bay (20 June); NS Rodman, Panama (11 July); and Mazatlán, Mexico (14–17 August).

Lewis B. Puller remained busy into New Year 1997, shifting her homeport to Naval Air Station (NAS) North Island, San Diego, in preparation for the Chinese Navy’s first port visit to the continental U.S. (20–25 March 1997). She also served as flagship for Commander, DesRon 1 (15–31 March). The frigate got underway for its final deployment, steaming for Rodman, Panama (2 October). She made a port visit at Curaçao in the Netherlands Antilles before passing through the Panama Canal (8–12 November) to patrol against narcotics smugglers in the Caribbean (12 November–31 December).

While remaining on station in the Caribbean for counter-narcotics operations through January 1998, Lewis B. Puller received orders to steam back to San Diego and join the United States Pacific Fleet, Naval Reserve Force (1 January 1998). Returning to her homeport on 23 January, the guided missile frigate conducted short underway periods and various training exercises though June. She hosted the 100th Anniversary of Lt. Gen. Lewis B. “Chesty” Puller’s birth with a party on board (26 June).

Lewis B. Puller was decommissioned on 18 September 1997. Transferred to the Egyptian Navy, she was renamed Toushka (F.906) the same day.

Lewis B. Puller received the Joint Meritorious Unit Award for performance during the 1997–1998 counter-narcotics deployment.