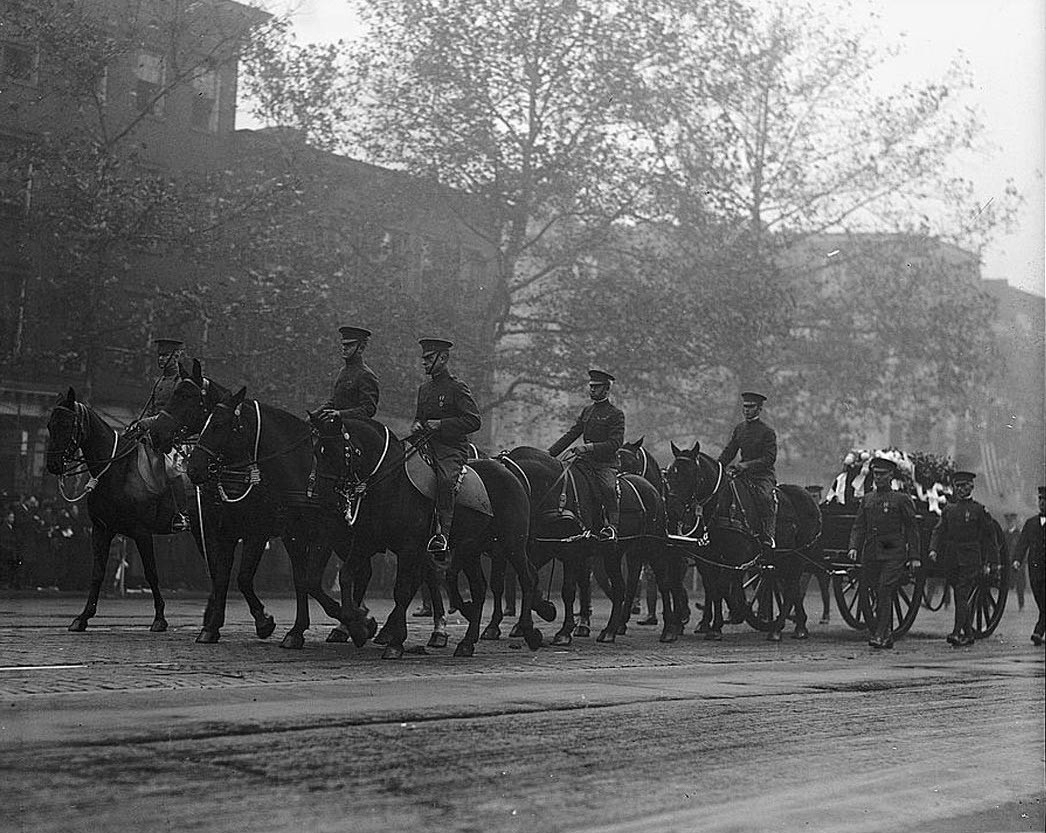 Each evening at approximately 6:30 p.m., France pays tribute to its war dead with the rekindling of the Eternal Flame and a remembrance of the country’s Unknown Soldier. Dozens of Americans joined the ritual at the Arc de Triomphe in Paris recently after a 10-day pilgrimage across France in celebration of the 100th anniversary of the dedication of the U.S. Tomb of the Unknown Soldier. Over the course of the historic trek, the group first visited the four World War I cemeteries where the candidates for the U.S. Unknown Soldier were chosen in 1921, then arrived in Chalons-en-Champagne, where the Soldier was selected for a ceremonial vigil and parade. They continued to Le Havre, where cruiser Olympia took the Unknown Soldier back to U.S. shores, sending him on his way to his final resting place at Arlington National Cemetery. “We were all just very honored to see the respect and affection of the French people toward us,” said Craig Fallon, who served with the Honor Guard at Arlington from 1962–63. The group traveled with a U.S. flag they flew over the four World War I cemeteries, a piece of timber from Olympia, and other artifacts. The collection is scheduled to go on display at the Washington Navy Yard and the U.S. Capitol Rotunda before arriving at Arlington on Veterans Day. For more, read the article. 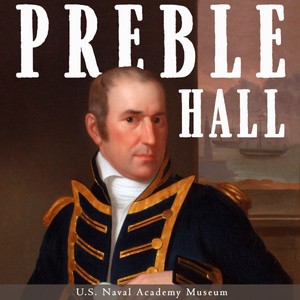 In a recent naval history podcast from Preble Hall, Stephen Phillips interviews NHHC’s Dr. John Sherwood, who is the author of Afterburner: Naval Aviators and the Vietnam War on the Naval Air War in Vietnam. The Preble Hall podcast, conducted by personnel at the U.S. Naval Academy Museum in Annapolis, MD, interviews historians, practitioners, military personnel, and other experts on a variety of naval history topics from ancient history to more current events. In addition, Troublemakers in Tahiti has also been posted. When the United States began to establish official commercial relations with Tahiti, the government and the Sailors who visited thought the U.S. consuls would be able to help them get the most out of their visit. Instead, the first two U.S. consuls destroyed the reputation of the United States and actively sabotaged their changes of good relations with the sovereign Tahitian government. Either actively or passively, they helped the French take over Tahiti in 1842 and made Tahiti a much less friendly place for Americans. 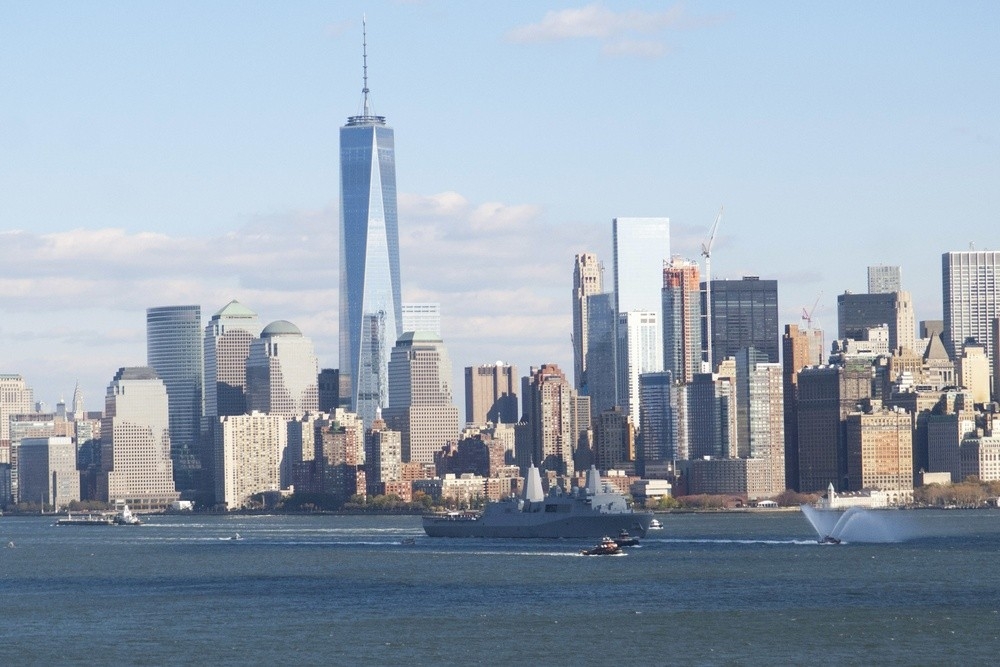 On Nov. 7, 2009, amphibious transport dock ship USS New York was commissioned at New York City. The ship has a remnant of steel from the World Trade Center incorporated into her bow to honor the victims of The 9/11 Terrorist Attacks. In September 2011, New York made way to its namesake city for the tenth anniversary of 9/11. Family members of the victims, along with first responders, embarked on the voyage from Norfolk, VA, to New York, enabling them to participate in the crew’s underway experience prior to the anniversary commemoration. In September 2017, New York assisted victims of Hurricane Irma in the Florida Keys. While there, Sailors and Marines distributed essential supplies, repaired generators, and restored other critical equipment. 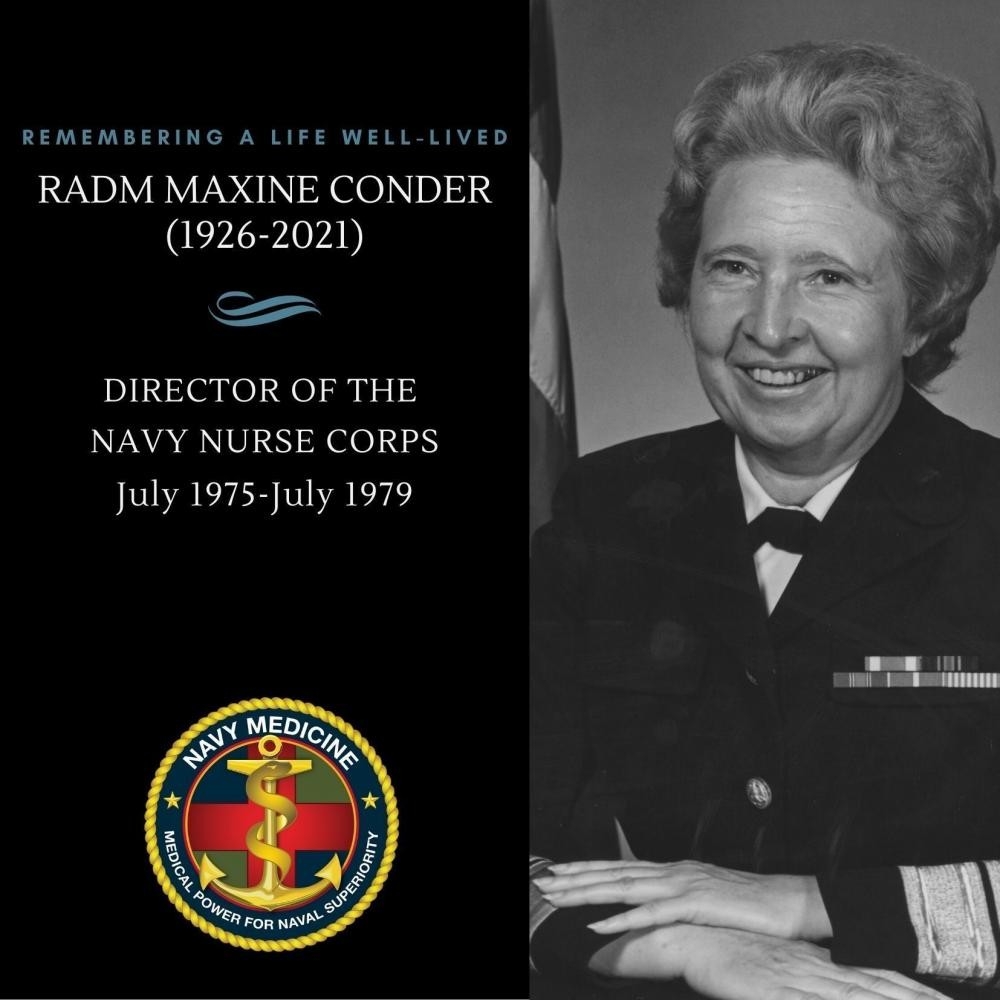 On Oct. 18, 2021, Rear Adm. Maxine Conder, the former director of the Nurse Corps and the second woman in the Navy to achieve flag rank, passed away. She was 95 years old. Conder took helm of the Navy Nurse Corps in July 1975, becoming its thirteenth leader and only the eighth person to hold the title of “Director of the Nurse Corps.” During her four-year tenure, she strived to develop career ladders and new professional opportunities for Navy nurses while helping to adapt the Nurse Corps to “post-Vietnam readiness requirements.” Under Conder, the first Navy nurses were assigned to “greenside” billets and construction battalions. In addition, new pathways for promotion were developed for nurses serving in administrative, education, and clinical billets. In 1977, Conder took part in an American Nurses Association–sponsored trip to the People’s Republic of China. As one of the select nursing representatives, she was the first U.S. Navy nurse to visit mainland China and one of the first U.S. military officers to visit since the end of the Chinese Civil War in 1949. For more, read the article. 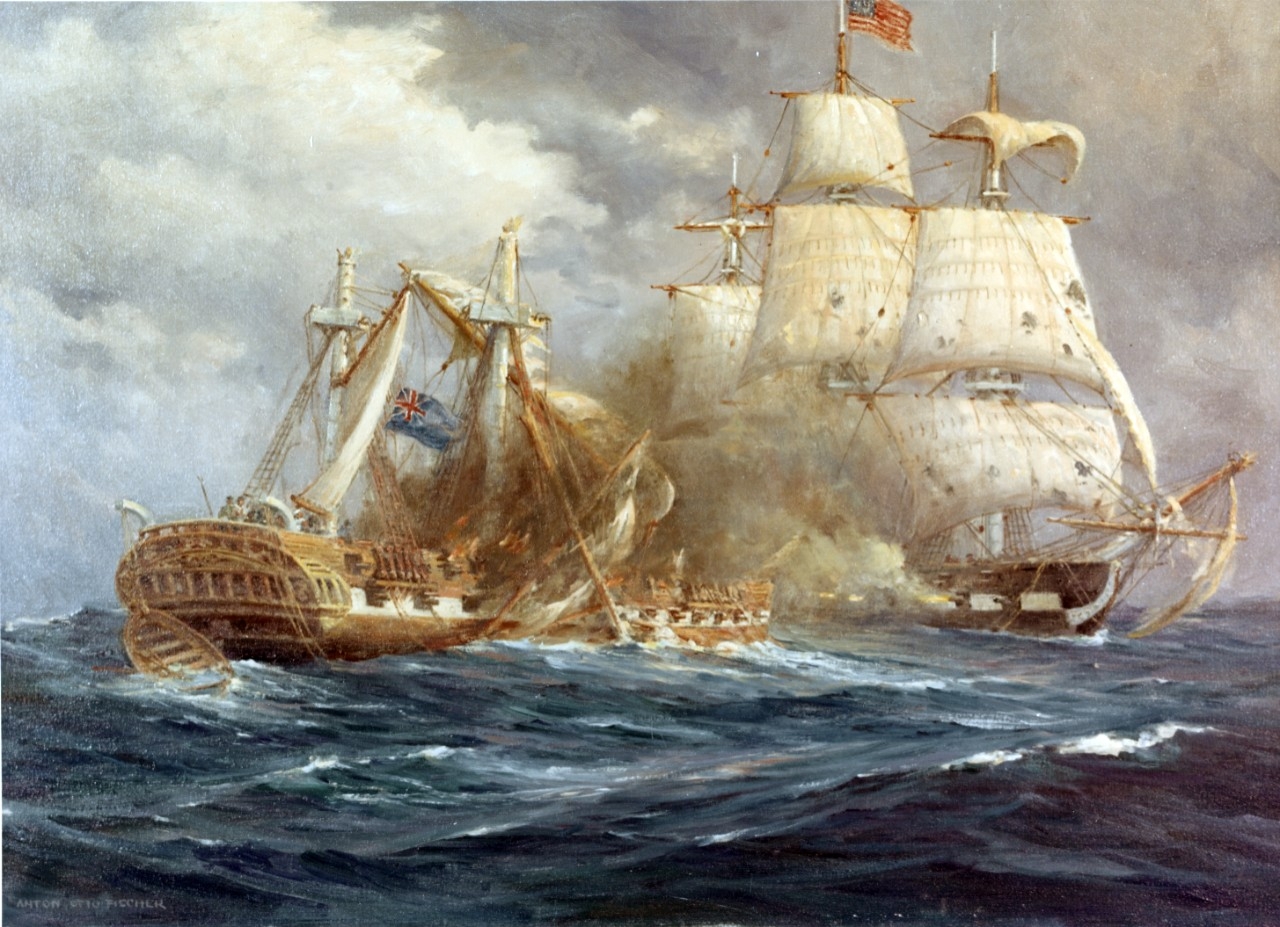 Historic frigate Constitution dropped all three topsails while underway recently for the 2021 Chief of Naval Operations’ Chief Petty Officer Training Weeks. With the help of 120 newly selected chief petty officers, Constitution’s crew completed the feat for the first time since 2012. For 23 years, Sailors selected for advancement to chief petty officer have come to Constitution to spend a week aboard “Old Ironsides,” immersed in naval history and heritage. “It has been an awesome experience,” said Joshua Yohn, a newly advanced chief petty officer. “Learning the history and talking with top-level master chiefs like force master chiefs and the master chief petty officer of the Navy has been amazing.” While underway, Constitution fired a 21-gun salute by Castle Island and fired an additional 17-gun salute as she passed U.S. Coast Guard Base Boston—former site of Edmund Hartt’s shipyard, where Constitution was built and launched on Oct. 21, 1797. Constitution is the world’s oldest commissioned warship afloat, and the world’s oldest vessel that can still sail under its own power. She played a pivotal role in the Barbary Wars and the War of 1812, actively defending sea lanes from 1797–1855. Annually, more than 500,000 people walk across her storied decks at the Charleston Navy Yard in Boston. For more, read the article. 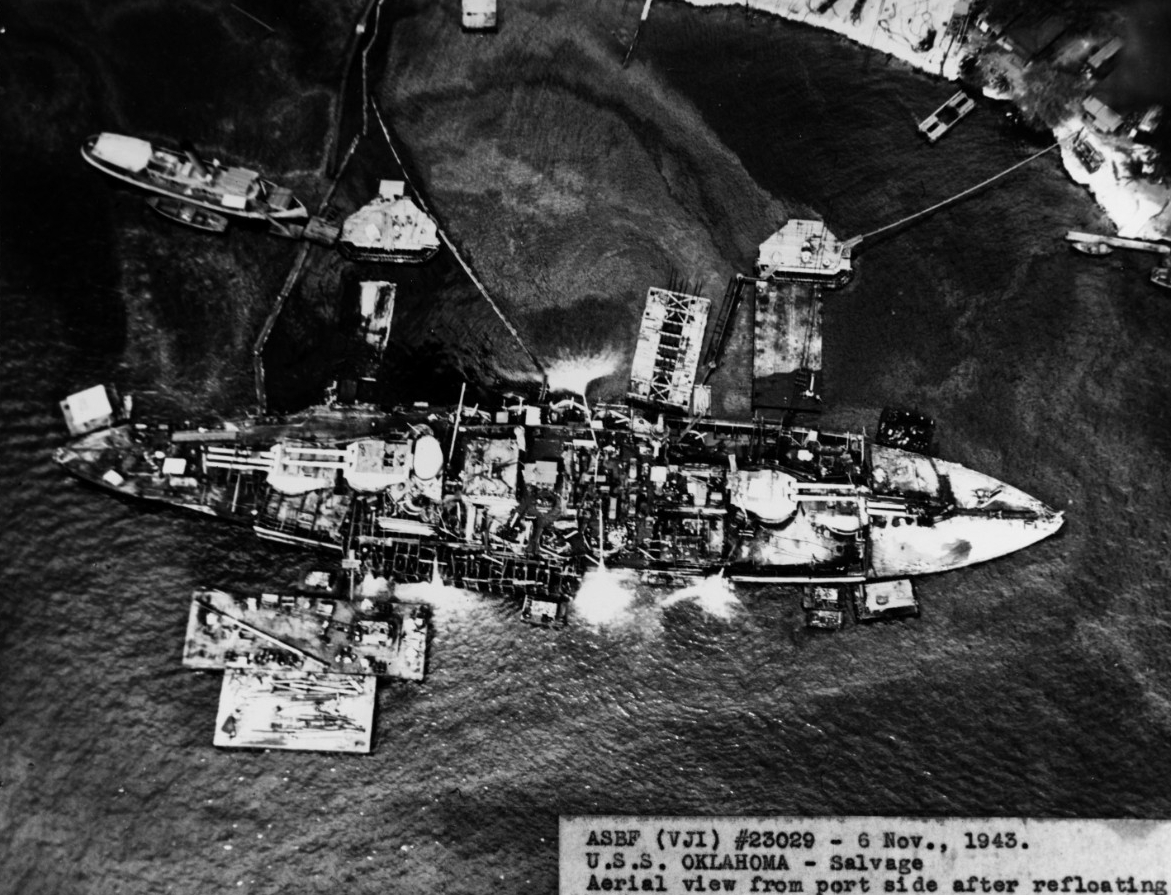 On Nov. 3, 1943, battleship USS Oklahoma was refloated following months of laborious effort after she was sunk during the Japanese attack on Pearl Harbor on Dec. 7, 1941. The refloating of the capsized battleship was the largest of the Pearl Harbor salvage jobs—and the most difficult. Returning the elderly and badly damaged warship to active service was never seriously contemplated. The purpose of the salvage was mainly to clear an important mooring berth for further use, and secondarily to recover some of Oklahoma’s weapons and equipment. Once Oklahoma was refloated, the ship was moored elsewhere in Pearl Harbor. She was sold to a scrapping firm in 1946, but sank in May 1947 in a storm while under tow from Hawaii to the U.S. West Coast. 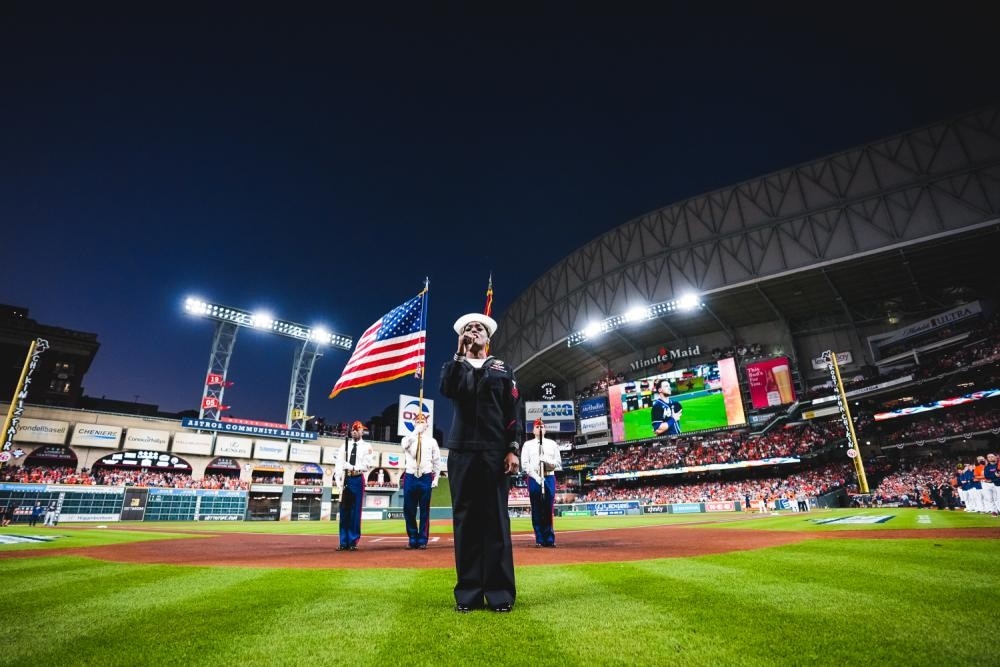 She sang the National Anthem on one of the biggest stages in professional sports. Petty Officer First Class Giavanni Walker belted out a spectacular rendition of “The Star Spangled Banner” ahead of Game 2 of the World Series between the Atlanta Braves and the Houston Astros on Oct. 27 at Houston’s Minute Maid Park. The 26-year old Houston native has been in the U.S. Navy for nearly eight years and serves as an operations specialist. She currently works as a recruiter. Walker has always had a passion for music, though, having previously released an R&B album. This was not the first time singing the National Anthem at Minute Maid Park, but definitely the biggest platform. She said serving in the Navy has given her confidence. “To me, serving in the Navy means confidence. It means bravery and courage. It means perseverance,” Walker said. “Most of all, serving in the Navy has aided me to focus on more than myself. Serving in the Navy has helped me to help others around me and empathize with people who are willing to serve, but do not meet the requirements or are unable to.” For more, read the article. The Navy has a long history with baseball. Be sure to check out the Navy Athletics page at NHHC’s website for more. 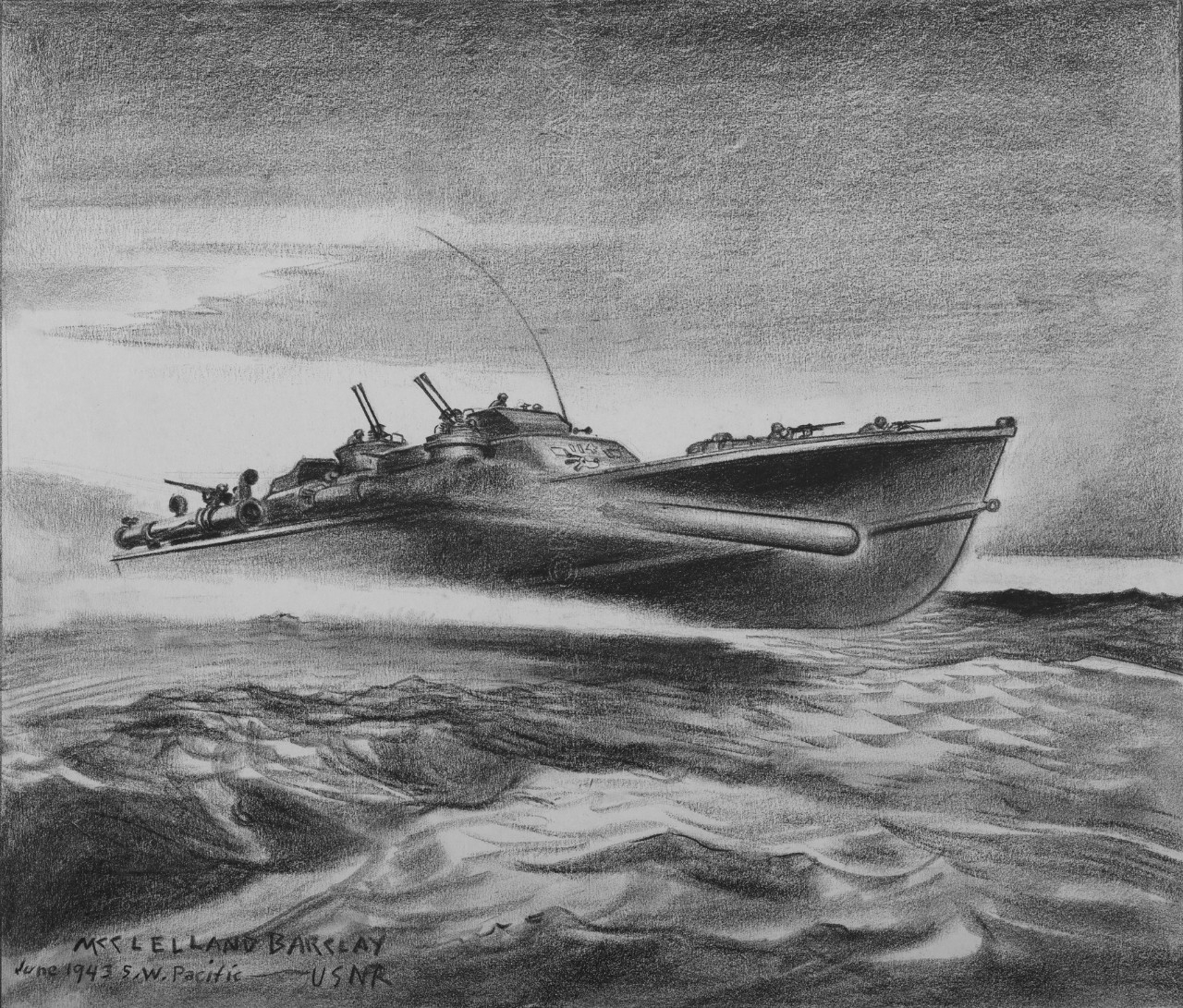 This week’s Webpage of the Week is from NHHC’s exploration and innovation pages. The Navy’s use of torpedoes dates back to 1775, when David Bushnell discovered gunpowder could explode underwater. The torpedo is a direct descendant of Bushnell’s rudimentary sea mine. Robert Fulton continued Bushnell’s work when he developed floating mines that were anchored to the ocean’s floor. In 1866, Robert Whitehead designed the first “automobile” torpedo that was self-propelled. It was designed to attack the enemy rather than wait for the adversary. His torpedo was the point at which all other concept designs would begin. The first Whitehead torpedo used a two-cylinder, compressed-air engine capable of traveling up to 6.5 knots for a distance of 200 yards. For more on this topic, check the page out today. It contains a short history, suggested readings, artifact information, and selected imagery. 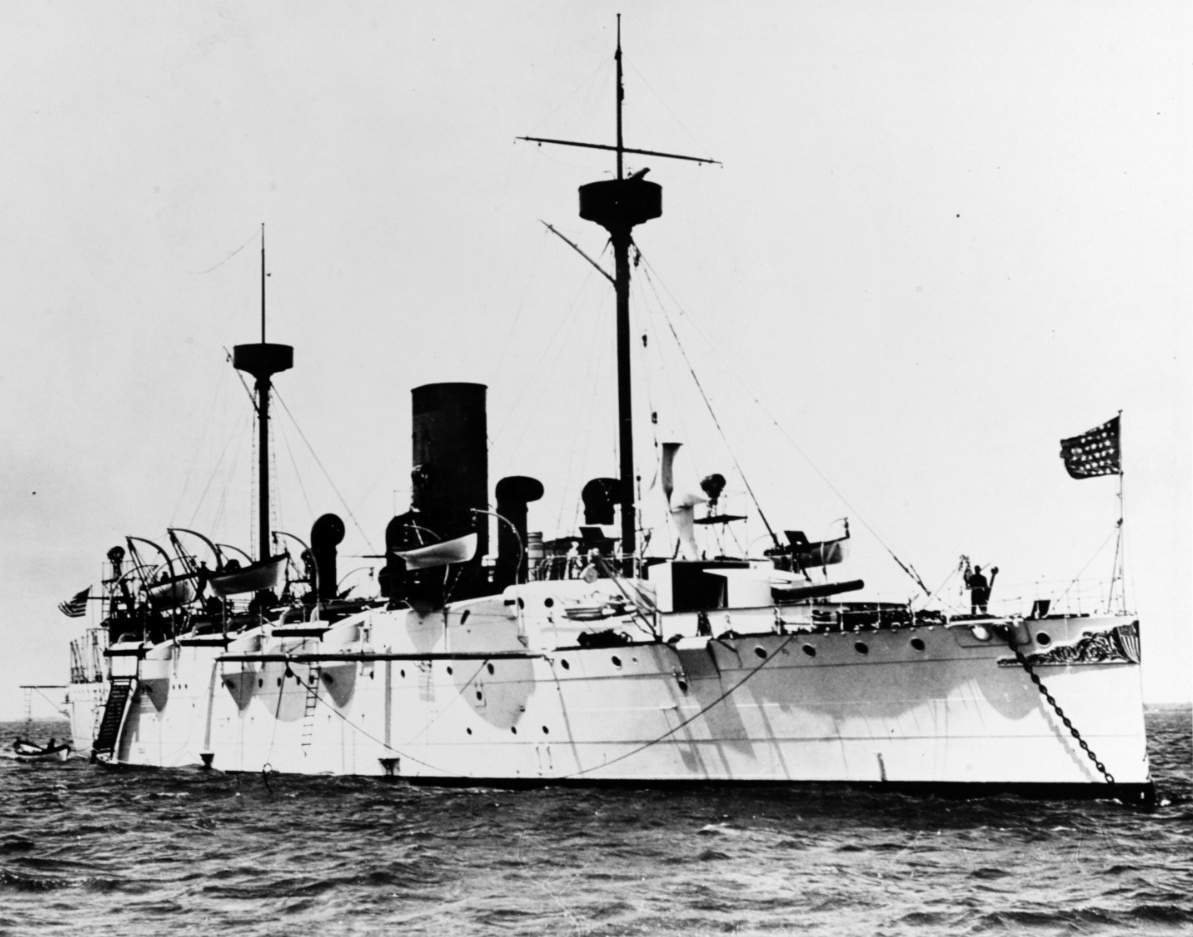 On Nov. 2, 1899, protected cruiser Charleston ran aground on an uncharted reef near Camiguin Island north of Luzon. Wrecked beyond salvage, she was abandoned by her crew, who made a camp on a nearby island, later moving back on to Camiguin while the ship's sailing launch was sent for help. On Nov. 12, gunboat Helena arrived and rescued the shipwrecked men. Previously, at the outbreak of the Spanish-American War, Charleston had quickly been made ready for service and was recommissioned on May 5, 1898. Sixteen days later she sailed for Honolulu, where she was joined by three chartered steamers transporting troops. Charleston was sent to raise the American flag over Guam, then a Spanish possession. She then took part in the surrender of Fort Santa Cruz in Apra Harbor before joining Adm. George Dewey’s fleet in Manila Bay. She arrived in Manila on June 30, 1898, to reinforce the blockade of the bay following the previous month's naval battle. Charleston joined in the final bombardment of Manila on Aug. 13, which brought about the surrender of the city. She remained in the Philippines through 1898 and 1899, bombarding insurgent positions to aid Army forces advancing ashore, and taking part in the naval expedition that captured Subic Bay in September 1899.