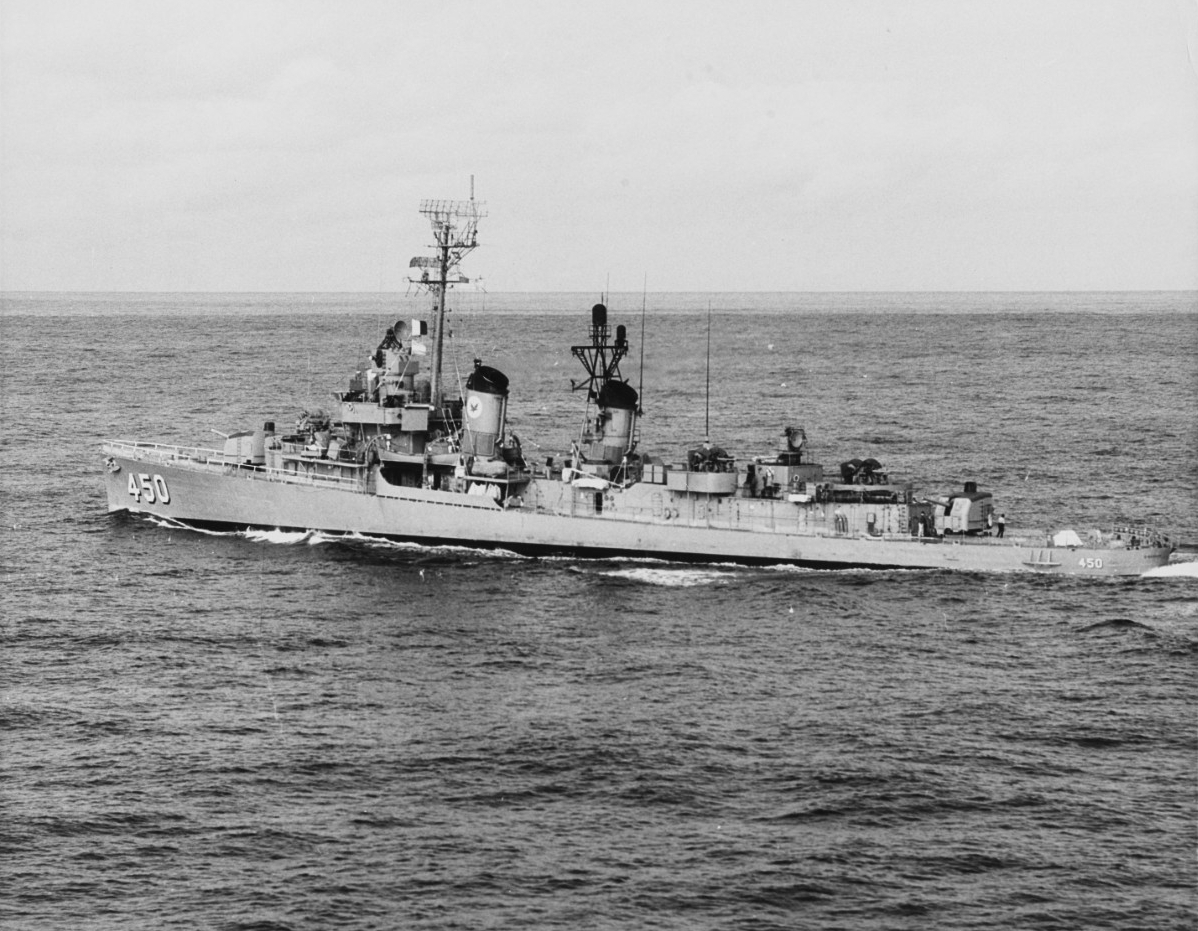 O'Bannon (DD-450) underway, while serving with Enterprise (CVAN-65) in the Sea of Japan, 1968. She had been redesignated from DDE-450 to DD-450 in 1962, but remains in DDE configuration. Official U.S. Navy photograph from the collections of the Naval History and Heritage Command. Catalog #: NH 107450

Presley Neville O'Bannon, born in 1784 in Fauquier County, Va., entered the Marine Corps 18 January 1801. As a first lieutenant he commanded a detachment of marines in General Eaton's little force in the War with Tripoli. During the combined operations with the U.S. Navy, he led the successful attack on Derne 27 April 1805, giving the Marine Corps its immortal "to the shores of Tripoli." After resigning from the Marine Corps 6 March 1807, O'Bannon lived in Franklin County, Kentucky, where he died 12 September 1850.

O'Bannon briefly trained for war in the Caribbean and sailed from Boston 29 August 1942 for the Southwest Pacific where the long and arduous battle for Guadalcanal had just begun. For over a year the Navy, stretched thin to cover its world-wide commitments at a period when new ships were just beginning to join the fleet in any number, was to fight and fight again in the Solomons in one of the most bitterly contested campaigns of history, wresting air and sea control from the Japanese, and providing the Marine Corps and the Army with every possible support as they gained ground inch by inch on the myriad islands. O'Bannon played a valiant part in these endeavors, it was to win her a Presidential Unit Citation.

Based at Noumea, New Caledonia, O'Bannon first escorted Copahee (CVE-12) on a run to Guadalcanal where on 9 October, twenty Marines flew their Wildcats off Copahee's decks, desperately needed as reinforcements at beleaguered Henderson Field. Through the remainder of the month O'Bannon sailed the New Hebrides and southern Solomons on escort duty. On 7 November at Noumea, she joined Rear Admiral Daniel J. Callaghan's Support Group, ready to sail with a convoy carrying critical reinforcements, replacements, food, ammunition, and aviation material.

On the approach to Guadalcanal, O'Bannon sighted and fired on a surfaced enemy submarine, holding it down while the convoy passed safely. On the evening of 12 November, the partially unladen transports were attacked by fifteen enemy torpedo bombers, all but one were shot down. O'Bannon fired on four of the downed enemy planes. Now came word that the Japanese were moving south in force. Two battleships, a light cruiser and 14 destroyers were bound to destroy Henderson Field by bombardment, to break up the American reinforcement mission, and to cover reinforcement movements of their own. O'Bannon and the other ships of the Support Force, two heavy and three light cruisers, and eight destroyers, confronted the greatly superior enemy early 13 November in Ironbottom Sound, so named for the number of ships on both sides sunk there during the Guadalcanal campaign. O'Bannon boldly attacked the Japanese battleship Hiei, closing so near that the battleship could not depress her guns far enough to fire on the gallant destroyer. O'Bannon's gunfire, in combination with the attacks of the rest of the force, damaged Hiei so badly that she was a sitting duck for the air attack which sank her next day. This Naval Battle of Guadalcanal was long and desperate; two American light cruisers, in one of which Admiral Callaghan lost his life, and four destroyers were lost, while two Japanese destroyers were sunk and Hiei prepared for her doom. Above all, the Japanese were turned back, and Henderson Field saved from destruction. The importance of this success is illustrated by the fact that next day Henderson aviators sank eleven enemy troop transports attempting to reinforce the island. 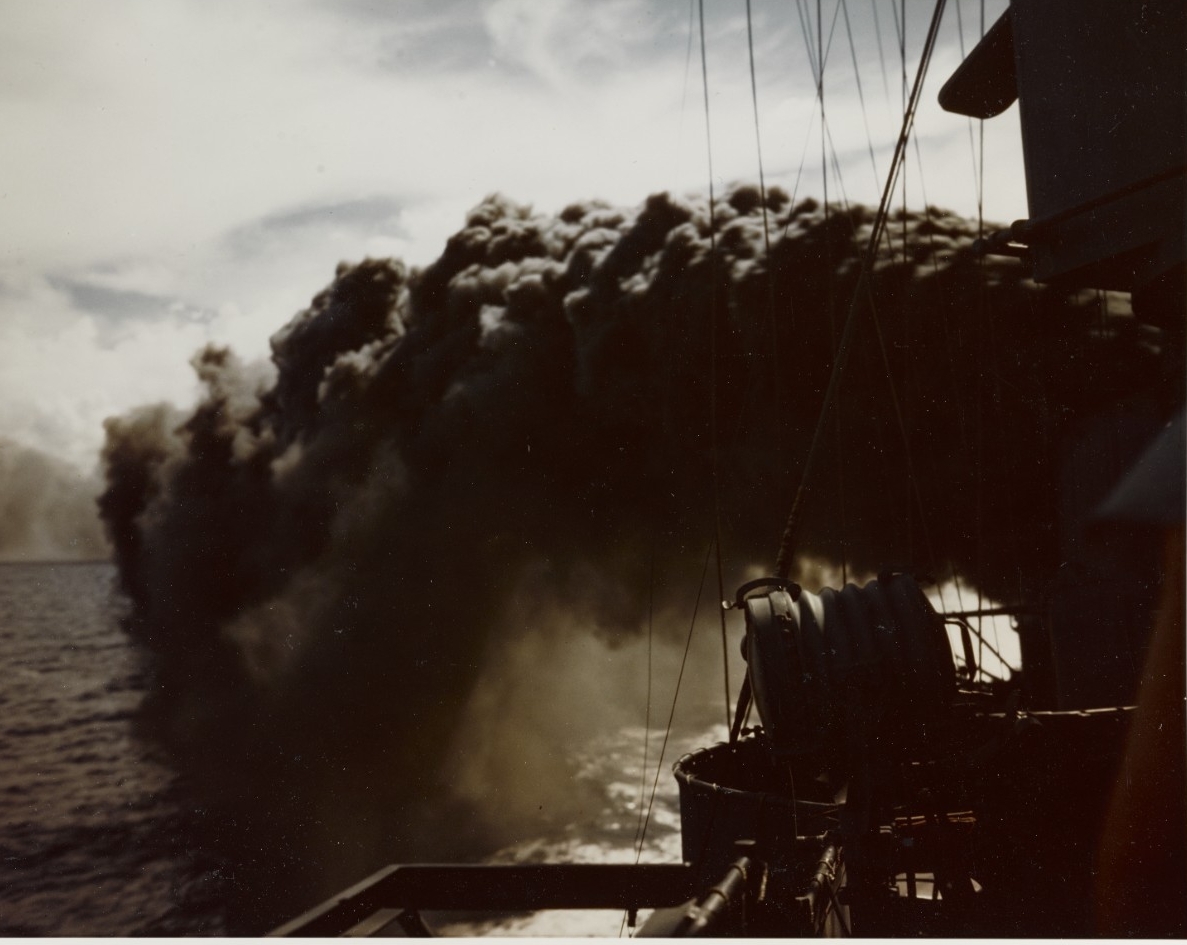 Through October 1943, O'Bannon protected landings, carried out escort duties from Noumea and Espiritu Santo to Guadalcanal and Tulagi, joined in bombardments at Guadalacanal, Munda, Kolombangara, and shouldered her share of the nightly patrols up the "Slot" between the Solomons, guarding against Japanese reinforcements. Retiring from such a run early 5 April, O'Bannon sighted on the surface and fired on Japanese submarine RO-34. During this period she also splashed at least two enemy aircraft in various attacks.

This duty was tense and demanded the best of men and their ships. In-port time was minimal-a few hours to fuel and reprovision, and the ships were off again. O'Bannon fought in many surface actions. The Battle of Kula Gulf (6 July), in which O'Bannon fought with three cruisers and three other destroyers against ten Japanese destroyers, swept the enemy from the area, though an American cruiser was lost. But a week later, a second battle had to be fought in the same waters against a Japanese cruiser, five destroyers and four destrover-escorts. The same American force sank the Japanese cruiser and turned the smaller ships away, losing none themselves.

For the next two months, O'Bannon spent most of her time in Vella Gulf, guarding landings, intercepting Japanese troop convoys and their covering escorts, and fighting off air attacks. With the aid of sister destroyers, she sank a number of barges, two submarine chasers, an armed boat, and a gun boat on various patrols. The climax of operations in the area was the Battle of Vella Lavella, 6 October, brought on by Japanese attempts to evacuate their troops from that island. With Selfridge (DD-357) and Chevalier (DD-451), O'Bannon made the first attack on the evacuation force, a group of nine or ten destroyers and smaller armed craft. The three American ships contacted six enemy destroyers, shrugged at the odds, and raced at 33 knots to launch torpedoes and open gunfire. Japanese destroyer Yugumo was turned into a blazing hulk, but both Selfridge and Chevalier took torpedo hits. O'Bannon was close on Chevalier's stern when the latter was struck, and the most radical maneuvers could not keep her from swinging into her sister's side. The enemy retired with three newlyarrived American destroyers in pursuit, while O'Bannon guarded her stricken sisters, rescuing the survivors of Chevalier.

O-Bannon made battle repairs at Tulagi, then sailed to the west coast for overhaul. By 18 March 1944 she was back in the Solomons, ready for her part in the series of westward-moving amphibious assaults which won New Guinea. Again, it was escort and bombardment repeatedly until 18 October, when O'Bannon cleared Hollandia to escort reinforcements for the invasion of Leyte. The convoy was brought in safely 24 October, the eve of the Battle for Leyte Gulf. O'Bannon guarded the Northern Transport area and patrolled the entrances to Leyte Gulf during the battle, coming under air attack. Thus she played her part in the definitive destruction of the Japanese Navy.

Through June 1945 O'Bannon operated primarily in the Philippines, serving in the escort or assault force for the long roll call of invasions: Ormoc, Mindoro, Lingayen, Bataan, Corregidor, Palawan, Zamboanga, Cebu, Caraboa. Air attacks were frequent in the early period, and O'Bannon splashed several raiders. During the Lingayen offensive, 31 January 1945, O'Bannon, with three other destroyers, attacked and sank an enemy submarine; Japanese records studied after the war indicate it was most likely RO-115. At the end of April and early in May, O'Bannon interrupted her Philippine operations to give fire support at Tarakan, Borneo and cover minesweeping operations there.

O'Bannon rendezvoused with a group of escort carriers off Okinawa 17 June, and guarded them as they struck against Sakashima Gunto. In July it was the large carriers that she protected as they flew strikes on northern Honshu and Hokkaido. With the close of the war, O'Bannon patrolled the coast of Honshu until 27 August, when she joined two other destroyers to escort Missouri (BB-63) into Tokyo Bay. There she patrolled until 1 September. She then sailed to San Francisco and San Diego, where she decommissioned after overhaul 21 May 1946.

O'Bannon recommissioned 19 February 1951 to serve out of Pearl Harbor. She sailed for her first tour of duty with the United Nations forces repelling Communist agression in Korea 19 November, and during the next seven months she guarded carriers at sea as their air groups struck targets in Korea; served as flagship for the Wonsan Element, East Coast Blockade and Escort Group; fired on enemy gun emplacements, road and rail supply routes, ammunition depots, and troop concentrations; and protected convoys moving between Korea and Japan.

A training period out of Pearl Harbor began upon her return home 20 June 1952, and she took part in AEC operations off Eniwetok. O'Bannon cleared Pearl Harbor late in April 1953 for the Far East where her primary mission was screening carriers. Thereafter she served on the Taiwan Patrol and in exercises off Japan and Okinawa.

Between the Korean War and the Vietnam War, O'Bannon took her part in the intricately planned schedule which assures the United States that its 7th Fleet is always composed of ships and men whose readiness for any emergency is at its keenest. For O'Bannon this has meant an alternation of roughly six-month deployments to the Far East and periods spent in training operations and necessary overhauls at Pearl Harbor. While in the Far East, she visited ports in Japan, the Philippines, Taiwan, Australia and New Zealand, with brief, welcome recreation calls at Hong Kong. She was often in either New Zealand or Australia for the annual commemoration of the Battle of the Coral Sea, a time of national rejoicing in those countries at which Americans are particularly welcome. She conducted combined operations training with the SEATO allies as well as exercising with Marines at Okinawa and taking part in exercises preparing for any conceviable demand that might be made on the 7th Fleet. While at Pearl Harbor, she often aided in training reservists in addition to her own training, and at various times sailed down-range for space orbits and missile shots. In the summer and fall of 1962, she took part in atomic tests at Johnston Island.

O'Bannon first closed the coast of Vietnam during her 1964-5 deployment, when on 26 December she left Hong Kong to patrol and conduct hydrographic surveys. Much of her 1966 tour was spent as planeguard for Kitty Hawk (CVA-63) while the carrier's jets struck targets in South and North Vietnam to lessen Communist ability to wage war in the South. For a week each in May and June O'Bannon fired shore bombardments, destroying Vietcong base camps, troop concentrations, and small craft.

The veteran destroyer returned via Yokosuka to Pearl Harbor 30 July. During operations out of home port, she trained for Apollo space craft recovery operations in August and was a member of the contingency recovery force for the Gemini 11 space flight early in September. She visited Guam in the spring of 1967 and returned home early in July to prepare for another Far Eastern deployment.

O'Bannon got under way for Japan 28 September, reached Yokosuka 7 October and Subic Bay on the 15th. She returned to the war zone with Constellation (CVA-64) and operated as plane guard on Yankee Station through 4 November. After a fortnight's respite at Subic Bay and Hong Kong O'Bannon sailed to Da Nang for shore bombardment. She visited Taiwan early in December but returned to the fighting on the 15th to provide gunfire support just south of the DMZ. Two days later she helped to rescue the crew of an American plane which had been hit over the DMZ and had managed to crash just off shore. An enemy battery shelled the destroyer during the operation but failed to score. As 1967 ended O'Bannon was still on the gun line supporting allied ground forces. 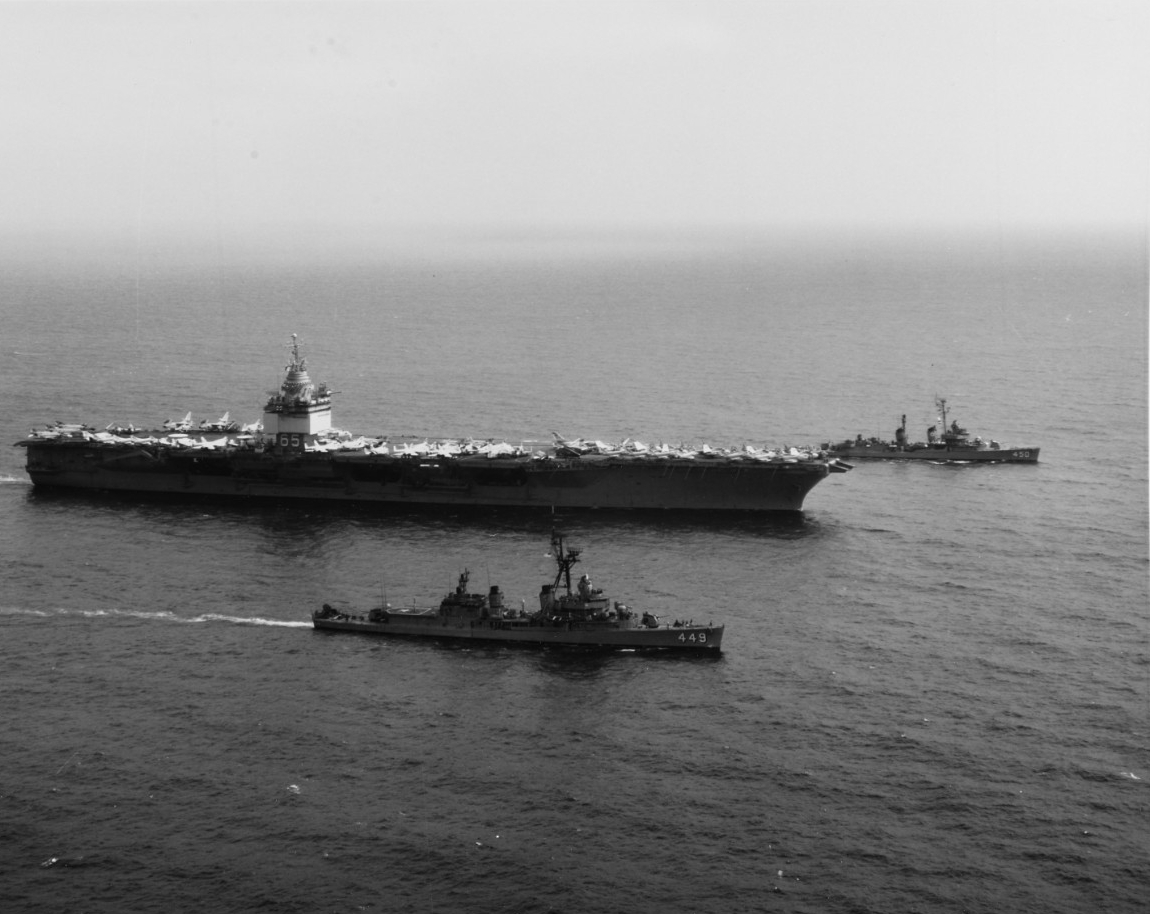