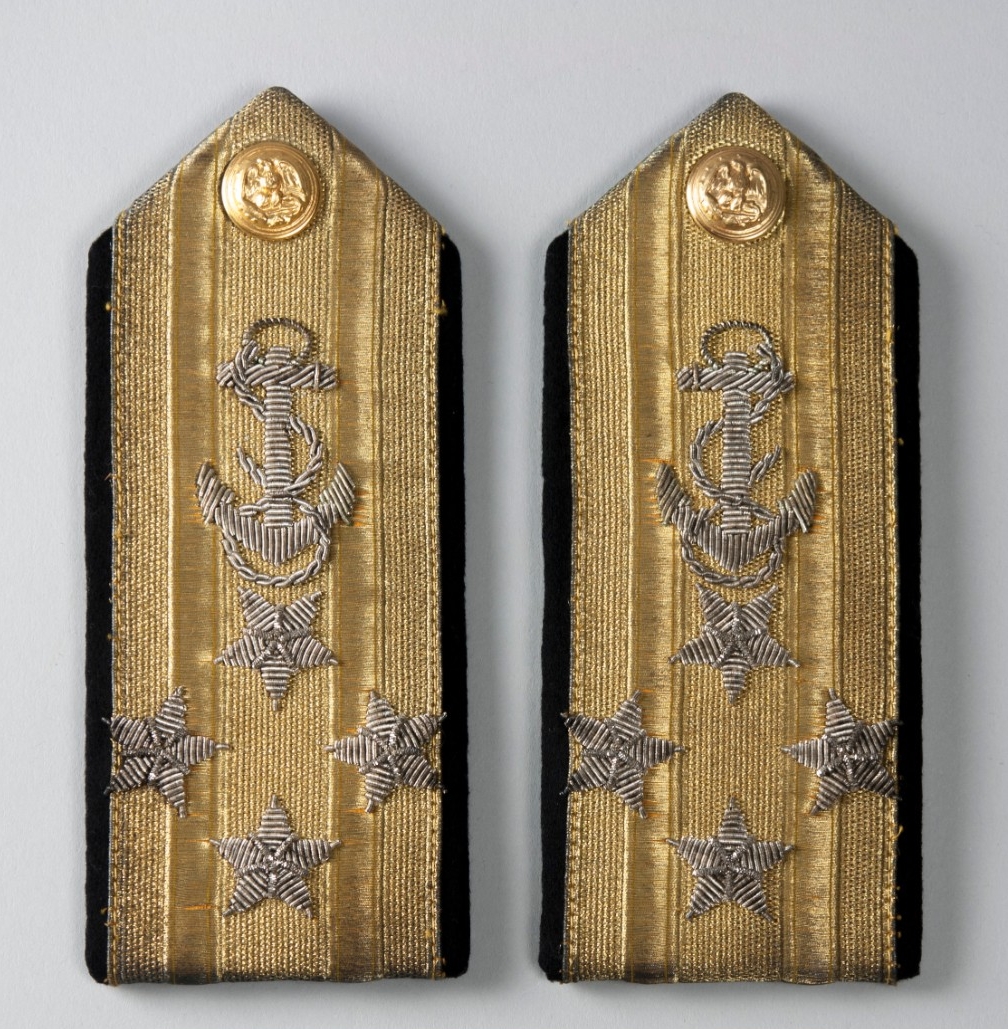 One pair of Admiral shoulder boards. Board are pentagonal-shaped. Obverse is gold fabric with black wool visible underneath. At the top point of the pentagon is a gold button with eagle holding an anchor. There is a silver embroidered fouled anchor below the button with the crown pointing toward the square end of the board. Below the anchor are four silver embroidered stars arranged in a diamond pattern. The reverse has a leather strap sewn on with a snap on the end. A // Gemsco // makers’ mark is underneath the strap. A stamp on the back of the button reads // United Carr //

These shoulder boards belonged to Admiral Thomas C. Kincaid. Admiral Kinkaid was a commander of cruiser divisions during the early years of World War II. His cruisers defended the USS Lexington (CV-2) at the Battle of Coral Sea, participated in the Battle of Midway, and defended the USS Enterprise (CV-6) at the Battle of the Solomon Islands. Admiral Kinkaid was promoted to commander of the 7th Fleet in 1943. In October 1944, Admiral Kinkaid personally commanded the assault on the Philippine Islands at the Battle of Leyte Gulf. Under his command were Admiral Oldendorf, VADM Wilkinson, and RADM Sprague. Under the supervision of Kinkaid, the US Navy participated in the last battle to occur among battleships. He was in command when Admiral Oldendorf performed his “crossing the T” maneuver, sinking 2 Japanese battleships and preventing the Japanese Navy from entering the Surigao Strait. Kincaid was promoted to four-star Admiral in April 1945, holding this rank until his retirement in April 1950.

Fun Fact: The Admiral ranks were not authorized by Congress until the Civil War. In 1866, President Andrew Johnson appointed David Farragut as the first Admiral in the US Navy, the rank we would recognize today as a four-star Admiral.