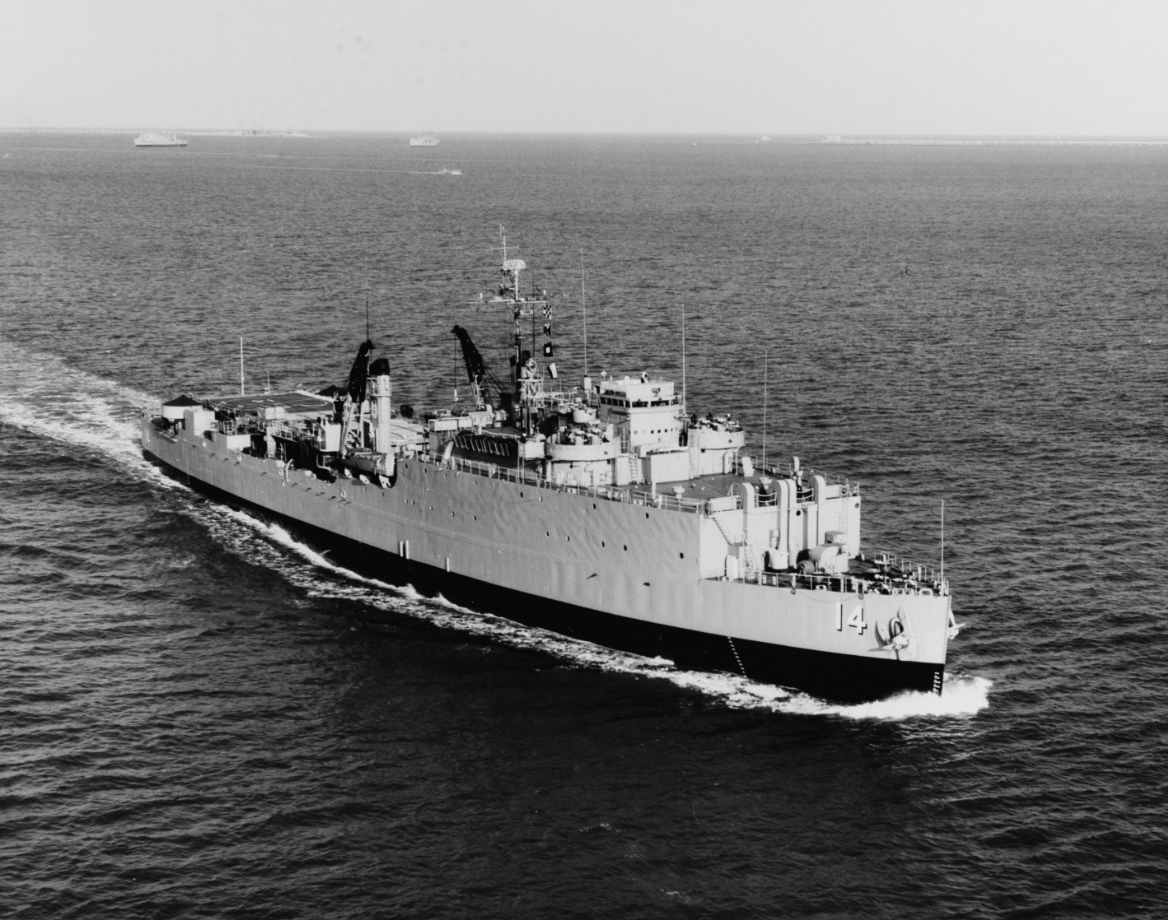 Following shakedown in the Chesapeake Bay, landing ship dock Rushmore departed Norfolk 5 August 1944 for the Pacific where she participated in four amphibious landings: Leyte Gulf in October 1944; Palawan in February 1945; Mindanao in March 1945; and Tarakan, Borneo, in May 1945. 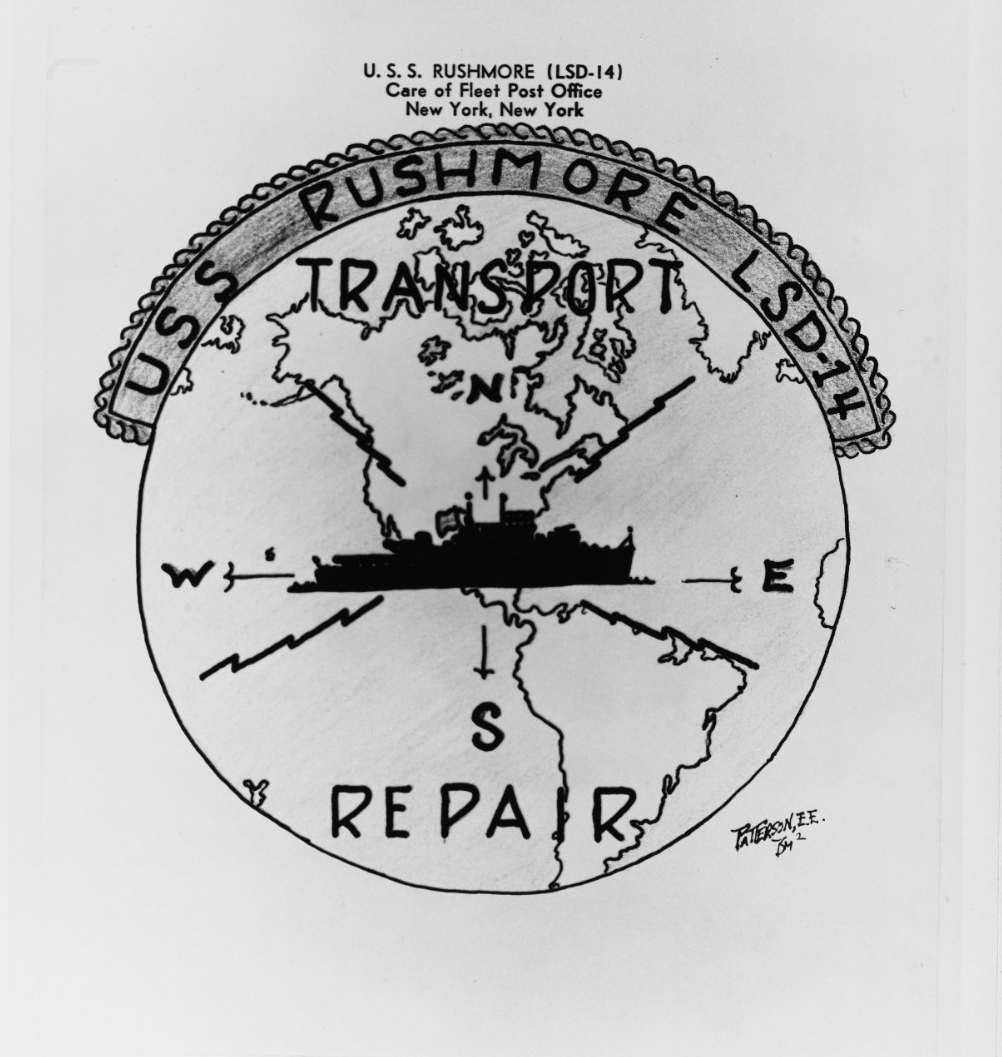 Rushmore entered Leyte Gulf early in the morning of 20 October, and after discharging her LCMs from her boat well in one of the first waves to hit Yellow Beach near Dulag, acted as repair ship for damaged landing craft. At Palawan on 28 February 1945, she landed Army-manned LCMs and other craft loaded with personnel and equipment of the 167th Field Artillery of the U.S. 8th Army. At Mindanao she carried a record 867 men for a 10 March landing on a beach north of the city of Zamboanga. For the invasion of Tarakan on 1 May, Rushmore carried U.S. Army-manned LCMs loaded with Australian troops and light tanks. The Australian troops were of the famed "Rats of Tobruk" battalion which had helped to chase German General Rommel out of Africa. During this landing, Rushmore was hit by a Japanese torpedo fired from the beach, which fortunately glanced off her hull without exploding or causing damage.

Returning to the Philippines, Rushmore loaded a 137-foot Japanese submarine which she carried to San Francisco to serve as a display to help sell war bonds. In the United States from 2 June to 27 June, Rushmore next carried landing craft from base to base in the South Pacific and was in Pearl Harbor when the war ended.

After the war, Rushmore operated in the Far East, particularly in occupied Japanese waters. She decommissioned 16 August 1946 and was mothballed in Pascagoula, Miss.

Rushmore recommissioned at Charleston, S.C., 21 September 1950 to begin a period of Atlantic Fleet service. Her next 10 years included Caribbean exercises, Reserve cruises, a Mediterranean cruise, and regular Arctic trips to resupply the DEW Line bases. Rushmore was present for ceremonies at Istanbul, Turkey, in May 1954 on the occasion of the return of various small lend-lease vessels from the U.S.S.R. Rushmore returned these ex-Soviet Navy vessels to the United States.

On 16 May 1960 Rushmore departed Norfolk for a 6-month tour with the 6th Fleet. Returning to the Atlantic coast, she again deployed to the Mediterranean in late 1961. Returning to Little Creek 22 February 1962, she operated in the Atlantic and Caribbean before a Fleet Rehabilitation and Modernization overhaul. On 9 November Rushmore hurriedly left the Bethlehem Steel Yards, Hoboken, N.J., because of the Cuban crisis and sailed to North Carolina to embark Marine units. However, with the easing of the situation in December, she returned to Little Creek.

On 4 February 1963, Rushmore began a 5-month deployment to the Mediterranean. From December until February 1964, she operated in the Caribbean, remaining near the Panama Canal Zone area during and after the riots there, ready to land troops to protect American citizens and Government property. Operating in the Atlantic and Caribbean until 6 October, she then departed the United States for Europe and the largest amphibious assault yet staged in peacetime, Operation "Steel Pike." She returned to Little Creek 26 November.

Rushmore was again deployed to the Mediterranean from 8 February 1965 to 24 July, participating in joint Norwegian-American and French-American exercises. In the summer of 1966 Rushmore made two midshipmen cruises. For the next 4 years she alternated deployments to the 6th Fleet in the Mediterranean with operations off the U.S. Atlantic coast. She deployed to the Mediterranean November 1966-May 1967, January 1968-May 1968, and November 1969-April 1970. Ordered inactivated soon after her return, Rushmore decommissioned 30 September 1970 and was transferred to the Maritime Administration's National Defense Reserve Fleet, James River, in February 1971. The old dock-landing ship was finally sunk as a target on 16 April 1993.