On 14 August 1950, the U.S. Navy recommissioned USS Pirate (AM 275) to serve in the Korean War, which had begun the previous June with the North Korean invasion of South Korea. During her service in the war, Pirate served as a minesweeper off the east coast of Korea. On 12 October 1950, Pirate, along with several other ships, was sweeping the area of the Wonsan Harbor near Sin-Do island. During her sweeping activities, Pirate was alerted of the presence of several mines and that the first confirmed mine position was close to her. As she was turning to change her course, she struck a mine. Then several moments later the same fate befell USS Pledge (AM 277). Although she sank, Pirate helped to clear the waters allowing the UN ships better access to Wonsan harbor and the continuation of their attack on North Korea.

The Salvage of Pirate

The next day a helicopter flying over the area spotted a number of mines around the wreckage. This meant that for salvaging to occur, a sweep of the area had to be done. Once done when diving to the wrecks could begin, the main focus was the retrieval of the onboard encryption devices. Due to imperfect weather and the ship's location, a more complete salvage of Pirate and Pledge would have taken months to complete. Thus, after the salvagers established that no classified information of use to the enemy was on board, the demolition of the ship was ordered to destroy anything of possible use left on the ship. The officer's in charge of the salvage operation decided to use routine air surveillance to insure that the enemy did not try to salvage the ship.

An Item of Value 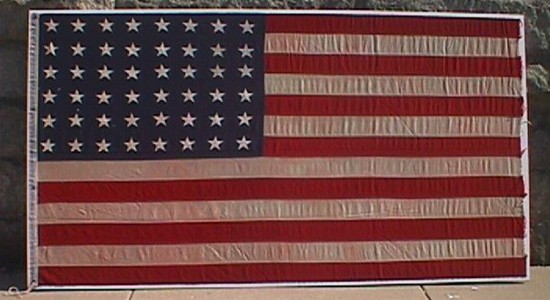 Contrary to the belief that there was only "a small chance of obtaining any item of value" from the wreck, one artifact of great value was recovered. When Pirate went down in 1950 so did her 48 star American flag. However, Captain Cornelius E. McMullen, Commanding Officer of Pirate at the time of her sinking, received an anonymous package sometime in 1952. Along with this package was a note stating that because he had been Commanding Officer of Pirate the sender thought that he, McMullen, would like to have the package's contents--the ship's American flag. On 28 May 1985, Captain McMullen donated the flag to the Naval Historical Center, where it is presently on display in The Navy Museum's Korean War exhibit.