Doris Miller or “Dorie,” as his shipmates called him, was born in Waco, Texas, on 12 October 1919, the son of Connery and Henrietta Miller. He attended grade school at the Alexander James Moore Academy in Waco and showed great promise during his time there as both a student and football player. Miller enlisted in the Navy on 16 September 1939, at Naval Recruiting Station, Dallas, Texas.

Following his initial training at Naval Training Station, Norfolk, Va., Miller received assignment as a mess attendant, one of the few ratings available to African Americans at that time. Although initially assigned to the ammunition ship Pyro (AE-1), he transferred on 2 January 1940 to the battleship West Virginia (BB-48). Miller was still serving on board the battleship when Japanese carrier aircraft attacked at Pearl Harbor, T.H., on 7 December 1941.

Despite having no formal training, Miller courageously operated an anti-aircraft gun and fired on the attacking Japanese planes. In addition to combatting the enemy attack, he also attended other wounded sailors. For his gallant actions, Miller became the first African American sailor to be awarded the Navy Cross. 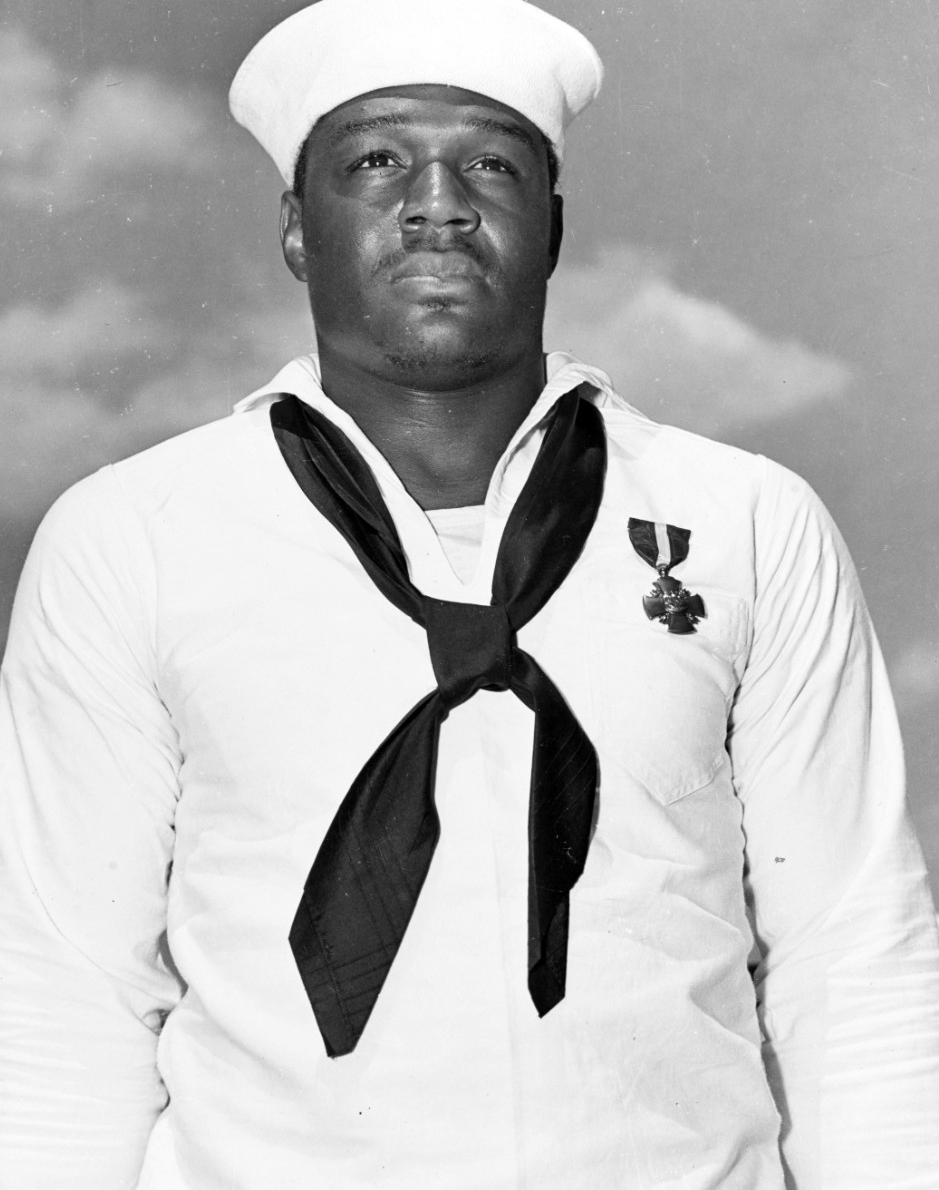 As the war raged on Miller continued his service for another two years, eventually joining the crew of the escort carrier Liscome Bay (CVE-56). Tragically, on 24 November 1943, Liscome Bay sank near the Makin Atoll following a torpedo attack by Japanese submarine I-175. Miller along with 645 of his fellow sailors went down with the ship.

In addition to the Navy Cross, Miller was awarded the Purple Heart, American Defense Service Medal with Fleet Clasp, Asiatic Pacific Campaign Medal and the WWII Victory Medal. For a complete biography and a transcript of his naval service, see:

Armed with modern anti-submarine weaponry, Miller’s primary mission upon joining the fleet in 1973 was to provide ocean escort services for carrier battlegroups, military convoys, and underway replenishment forces. Following her commissioning, the warship conducted her shakedown in the Caribbean Sea and then returned to her homeport at Norfolk. 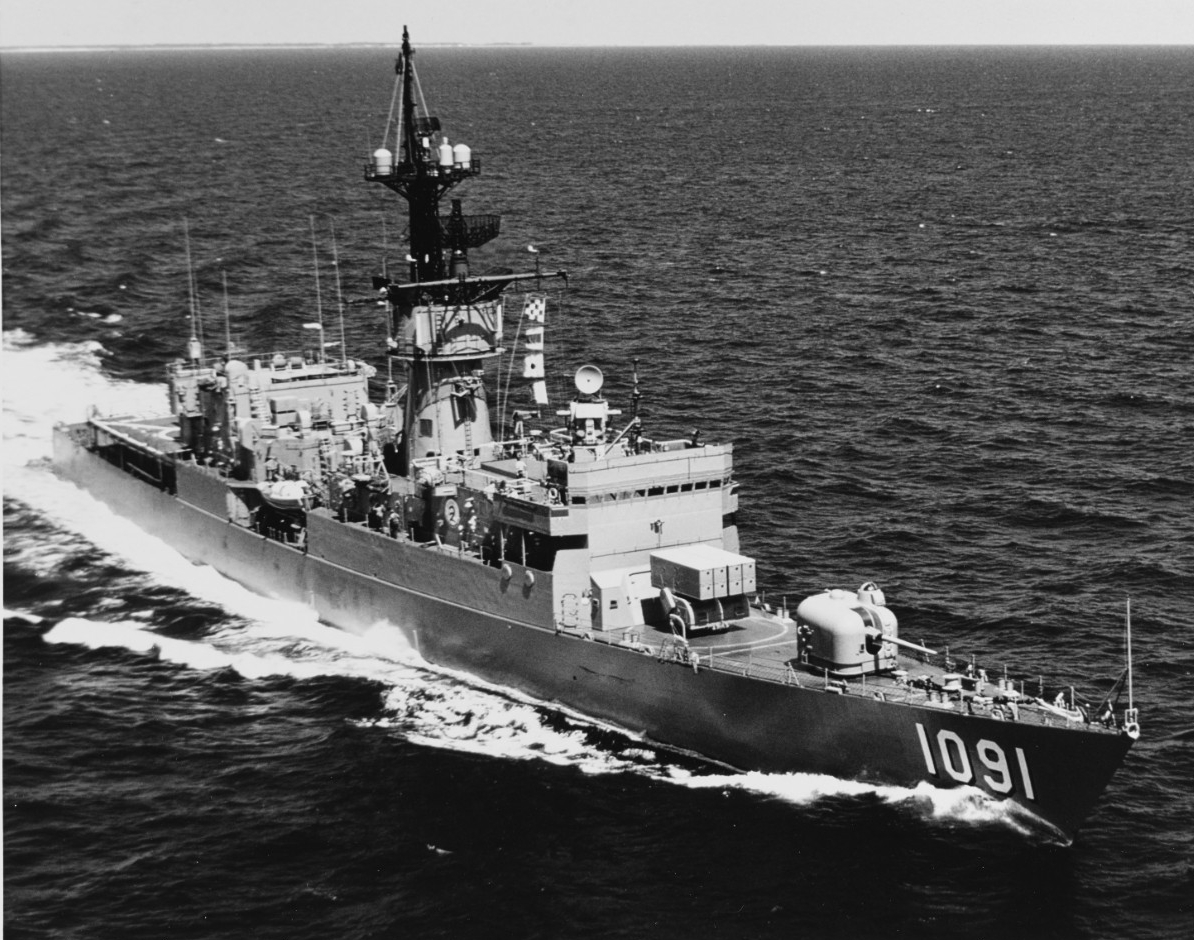 From 23 September to 10 October 1974, Miller was underway for her first annual readiness exercise LAN-TREDEX 1-75. In the course of the exercise, she partook in fleet maneuvers, missile exercises, and Anti-Submarine Warfare (ASW) training. Just a month later, from 18 to 25 November, Miller began preparations for her first major deployment by participating in Composite Training Unit Exercise (COMPUTEX) 4-75.

With “fires lit under boiler 1” on 3 January 1975, Miller quit the east coast of the United States and set out on her first deployment bound for the Mediterranean Sea. She arrived off Gibraltar, British Overseas Territory, on 13 January, and then began a multi-month cruise of various Mediterranean ports. While still operating in the Mediterranean on 1 March, Miller became the first U.S. Atlantic Fleet ship to install a four-channel SQR-17A Passive Sonobuoy Data Processor, making her embarked LAMPS detachment “the most advanced single ship helicopter ASW team in the Mediterranean.”

Miller capped off her Mediterranean deployment by participating in the joint exercise SHABAZ, wherein she operated closely with the aircraft carrier Forrestal (CV-59) and the frigate Wainwright (DLG-28). The warship returned to American waters on 22 June 1975.

Just a week after the start of the New Year, on 6 January 1976, Miller got underway with Commander Task Unit (CTU) 20.8.3 for her second deployment to the Mediterranean Sea. Passing Gibraltar on 17 January, Miller proceeded to participate in several important operations. From 5 April to 2 May, the frigate aided in Operation FLUID DRIVE, which evacuated American citizens and other foreign nationals from Beirut, Lebanon, due to the outbreak of the Lebanese Civil War. In May, she participated in the multi-nation naval and air exercise Operation DAWN PATROL.

Miller arrived back at Norfolk on 27 July 1976. In recognition of her crew’s “outstanding performance in anti-submarine warfare operations in the Mediterranean during her deployment,” Miller received an ASW Letter of Commendation from the Commander of the Sixth Fleet. In the months following her return, Miller largely remained at port. Her last operation of the year was COMPUTEX 2-77, which lasted from the 15th to the 24th.

“Underway for Bermuda” on 4 January 1977, Miller deployed with Standing Naval Force Atlantic. From 14-17 January, she made a port call at Portland, United Kingdom, and then in the subsequent months participated in multiple North Atlantic Treaty Organization (NATO) exercises in the area of the North Sea and the Arctic Circle. Sortieing with the British Royal Navy, she got underway for exercise “Locked Gate” on 24 January and then from 20 to 27 February she partook in the British national exercise “Spring Train.” These were followed by the Dutch national exercise “Raving Nut,” (25 April-5 May) and the German national exercise “Bright Horizon,” (18-24 May). In the course of these vigorous training exercises Miller’s LAMPS helo set an HSL-32 flying record, logging over 510 flight hours while on deployment. Miller returned from her Atlantic deployment on 26 July.

Miller concluded the year by participating in COMPUTEX 1-78, which lasted from 7 to 28 October 1977. On 1 February 1978, Miller got underway for the month long multi-threat training exercise READEX 1-78, which lasted through 3 March. On 15 May, the frigate stood into Boston and began an extensive yearlong baseline overhaul at the Bethlehem Steel Shipyard.

On 11 April 1979, Miller’s homeport changed to Newport, R.I. A few months later on 10 June, while the frigate was in transit to “Port Everglades,” her Kaman SH-2 Seasprite helicopter crashed at sea, but fortunately, the pilot and crew were recovered without serious injury. On 11 July, due to continuing political upheaval in Nicaragua, Miller stood off the coast of the country in the event that any American citizens might need to be evacuated. Later that fall, from 1-12 October, she got underway for COMPUTEX 1-80.

Underway with Task Unit (TU) 20.5.1, on 9 November 1979, Miller went on a six-month cruise of the Mediterranean Sea and Persian Gulf, returning to the United States on 9 April 1980. From 1-17 December 1980, Miller participated in COMPUTEX 1-81, during which she won awards in Celestial Navigation, ASW, and Naval Gunfire Support.

In March 1981, Miller set out on another voyage to the Mediterranean Sea. Arriving near Athens, Greece, on 23 March, the frigate spent the next several months participating in Sixth Fleet carrier battle group (CVBG) operations that ventured into the Black Sea. Miller arrived back in Newport on 15 July.

On 15 January 1982, Miller was transferred to the Naval Reserve Force (NRF), assigned to Commander Naval Surface Group Four, but retained her homeport in Rhode Island. In addition to the frigate Lang (FF-1060), which was based on the west coast, Miller became one of only two modern, operational frigates to be assigned to the NRF at that time. This was done to “give reservists a modern platform on which to receive mobilization training compatible with fleet requirements.” Over the course of the next four years, 8 Knox class frigates and 16 Oliver Hazard Perry class frigates also joined NRF. Miller served in this important Naval Reserve training mission for the rest of her career.

With her entry into the NRF, Miller continued to participate in fleet exercises and inspections over the course of the next several years. In addition to annual Operational Propulsion Plant Examinations (OPPE) and Surface Warfare Training Weeks, she also participated in a Combat Systems Readiness Review (6-25 August 1983); exercise SOLID SHIELD (25 April-4 May 1983); NBOA/SUB SVCS/SQR-18 Certification (13-15 February 1984); Tactical Towed Array System training (7-9 March 1984); COMPUTEX 1-85 (31 October-19 November 1984); Memorial Service for the crew of the shuttle Challenger (3 February 1986); and Fleet Exercise 1-86 (12-21 February 1986).

Shortly after re-qualifying at the Naval Training Range, Vieques, Puerto Rico, in early April 1987, Miller embarked a U.S. Coast Guard Law Enforcement Detachment, which aided her in supporting federal drug interdiction efforts in the area. From 25 October to 13 November, Miller also participated in the testing of a new submarine torpedo at the Atlantic Undersea Test and Evaluation Center (AUTEC), Andros, Bahamas. The following year in May 1988, Miller became one of the first naval reserve ships to be “assigned REFTRA at Guantanamo Bay, Cuba.” In addition to her annual trainings and exercises, the frigate continued to facilitate several “WET weekends,” with midshipman from the U.S. Naval Academy as well as various Naval Reserve Officer Training Corps universities.

In subsequent years, Miller continued to perform exceptionally in annual inspections and readiness exercises. The warship participated in Fleet Exercise 1-89 (December 1988); Tail Proficiency Training (TPT) in the Western Atlantic (10-19 April 1989); combined Navy/Coast Guard drug operations off the coast of Columbia (13 November-5 December 1989); TPT in the Western Atlantic (12-23 March 1990); naval gunfire support exercises off Vieques (28 May-13 June 1990); and was also hosted by the city of Philadelphia to celebrate the 75th Anniversary of the NRF (2-7 August 1990).

Miller was struck from Naval Vessel Register on 11 January 1995.

Miller was awarded a Meritorious Unit Commendation for her service from 1982 to 1984.