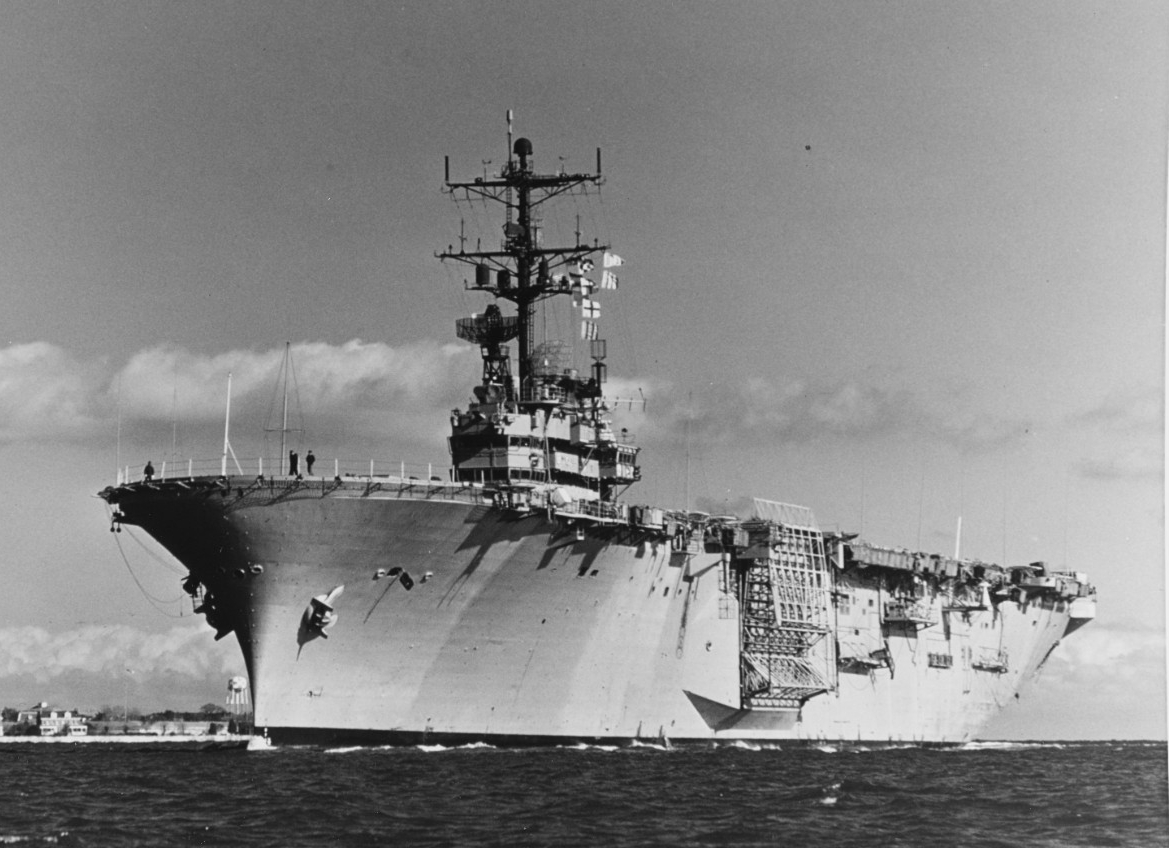 A small volcanic island in the Bonin Group. Iwo Jima was the site of one of the most important and most bitterly fought amphibious operations of the Pacific War. The strategic island, needed as an air base for the assault on Japan itself, was invaded 19 February 1945 and declared secure almost a month later. Fleet Admiral Chester W. Nimitz spoke eloquently of the Sailors and Marines who fought there: "Among the Americans who served on Iwo Island uncommon valor was a common virtue." The famous photograph of the flag-raising on Mount Suribachi has become a symbol of valor and strength in the years since 1945. 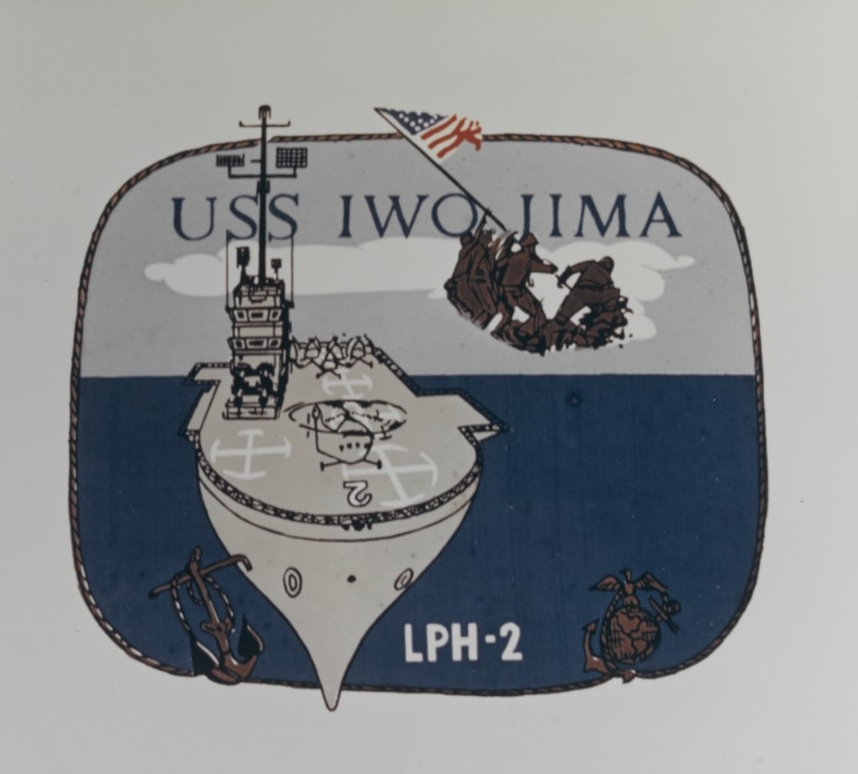 Insignia: Iwo Jima (LPH-2). This emblem, received in 1967, features depictions of the ship, the flag raising on Iwo Jima in 1945, and the Navy anchor and Marine Corps emblem. Naval History and Heritage Command photograph, NH 70339-KN.

The first ship to be designed and built from the keel up as an amphibious assault ship, Iwo Jima carries helicopters and a detachment of embarked marines for use in the Navy's newest "vertical envelopment" concept of amphibious operations. Following shakedown training, she spent the rest of 1961 off the California coast in amphibious exercises. In April 1962, the ship joined Joint Task Force 8 in the Johnston Island-Hawaii area for an important series of nuclear tests. Iwo Jima evacuated several islands and took part in the test evaluation. She sailed for Pearl Harbor, Hi., on 26 July from the test area, and continued to San Diego, where she arrived on 10 August 1962.

In September the ship took part in full-scale amphibious exercises in California, departing on 17 October from San Diego for her first deployment to the western Pacific. As a crisis flared on 19 October over the introduction of offensive missiles into Cuba, however, Iwo Jima returned to San Diego, embarked Marines from 22 to 27 October, and sailed quickly for the Caribbean. As part of America's powerful and mobile force afloat, she cruised in a "ready" status until December brought an easing of the Cuban situation. She arrived at San Diego on 13 December, having played a major role in preserving American and Latin American security.

Iwo Jima operated out of her home port during the first half of 1963, carrying out amphibious exercises and training. She departed on 30 August on her long-delayed cruise to the western Pacific. Joining the Seventh Fleet, mobile bulwark of American security in the area, she ranged from Hawaii to the Philippines and Taiwan.

On 31 October 1963, Iwo Jima departed Philippine waters for special operations along the coast of South Vietnam, standing by to protect American nationals during a period of increased strife. She returned to Subic Bay in the Philippines on 12 November. The following months she sailed with Special Landing Forces of marines for rigorous amphibious assault and landing raids practice off the coasts of Taiwan and Okinawa. After unloading ammunition at Sasebo, Japan, she stood out to sea on 13 April 1965 for return to San Diego, arriving on 28 April. Following amphibious training with Marines along the California seaboard, she overhauled in Long Beach Naval Shipyard, Calif. This work was completed by 7 December 1965 when Iwo Jima began amphibious refresher training ranging to the Hawaiian Islands. On 13 March 1965, she departed Pearl Harbor for San Diego, arriving six days later.

Iwo Jima received tons of supplies and scores of Army helicopters, tanker trucks, and vehicles in her hangar and flight deck spaces. Nearly a thousand troops were embarked for her western transit that began on 12 April. She touched Pearl Harbor a few hours on 17 April to off-load 50 Marines and their equipment, then steamed off St. Jacques, South Vietnam, from 1 to 2 May, flying off 77 Army helicopters, loaded with troops and combat cargo. From there she proceeded to Subic Bay in the Philippines, where troops and equipment were received for amphibious landing at Chu Lai, Vietnam, on 11 May 1965.

Iwo Jima remained off Chu Lai for a month, protecting Marines and Seabees establishing an air field on the sandy shore. Besides helicopter support ashore, including defense perimeter patrol, she was a support center for laundry, showers, fresh provisions, and store and mail service. She also supervised the continual off-load of ships over the beach for the entire month, then on 7 June 1965, landed squadron personnel and helicopters ashore at Hue-Phu Bai, some 30 miles north of Da Nang. After a few days rest in Subic Bay she was routed to Sasebo, thence to Buckner Bay, Okinawa, where she embarked Marines and equipment. On 26 June 1965 she completing loading and sailed for Quinohn, South Vietnam, in company with attack transport Talladega (APA-208) and dock landing ship Point Defiance (LSD-31). These ships comprised Task Group 76.5, that part of the Seventh Fleet that carried the Marine Special Landing Force. On 30 June she arrived at Quinohn, about 100 miles south of Chu Lai. The following day, marines landed ashore to take up defensive positions for the protection of Army engineers and communications units.

Iwo Jima remained off Quinohn for defensive support until 20 July 1965, then steamed for Pratas Reef about 240 miles southwest of Taiwan. Arriving the morning of 22 July, her helicopters were immediately pressed into service to aid the salvage radar picket destroyer Frank Knox (DDR-742). The close approach of typhoon "Gilda" pounded the grounded destroyer so badly that it was impossible for small boats to get alongside her. Extra men were heli-lifted off the destroyer while surf rose 12 feet high to break completely over the stern of Frank Knox. Support given by Iwo Jima included such items as hot food, clothes, water, pumps, hose, gasoline, air compressors, welding machines, damage control equipment and technicians. Feed water was heli-lifted in special tanks constructed by destroyer tender Prairie (AD-15) who had faint hope of keeping the destroyer's boiler alive. Detached from this duty on 1 August 1965, Iwo Jima made a brief call at Hong Kong, then proceeded to the Philippines.

On 17 August 1965, Iwo Jima steamed out of Subic Bay for Vung Tau, Republic of Vietnam, to join in Operation Starlight, a five-day search-and-destroy operation that eradicated some 600 Viet Cong. The successful Navy-Marine Corps amphibious operation backed by gunfire support from guided missile light cruiser Galveston (CLG-3) and two destroyers, came to a close late on 24 August. Iwo Jima's evecuation and surgical teams kept the American casualties down to a very low percentage. During transit back to Subic Bay she learned Frank Knox had been refloated, good news for Iwo Jima's crewmen who had put in so many hard and long hours at Pratas Reef. She landed her Marine Special Landing Force at Chu Lai on 1 and 2 September, embarked 800 marines of a rotation draft, and sailed for Buckner Bay.

Iwo Jima landed the rotation troops at Okinawa, then came off Quinohn on 10 September 1965, to cover the landing of the Army's 1st Air Cavalry Division. She had supported three amphibious assault search-and-destroy raids along the coast by 1 October when she steamed to southern waters, remaining in stand-by status for possible evacuation of U.S. nationals in revolt-torn Indonesia. Eight days later she sailed for Danang for a helicopter squadron exchange, thence to Subic Bay where Valley Forge (LPH-8) relieved her. Following a visit to Yokosuka, she steamed on 1 November for return to San Diego, arriving on 17 November 1965. Several months later she again joined the Seventh Fleet Amphibious Ready Group, a fast moving assault force which had completed more than 20 search-and-destroy operations along the South Vietnamese coast between March 1965 and September 1966. One of these missions hit only three miles south of the demilitarized zone to search out and decimate a regiment of the North Vietnam Army's 342B Division which had infiltrated South Vietnam through the neutral zone. 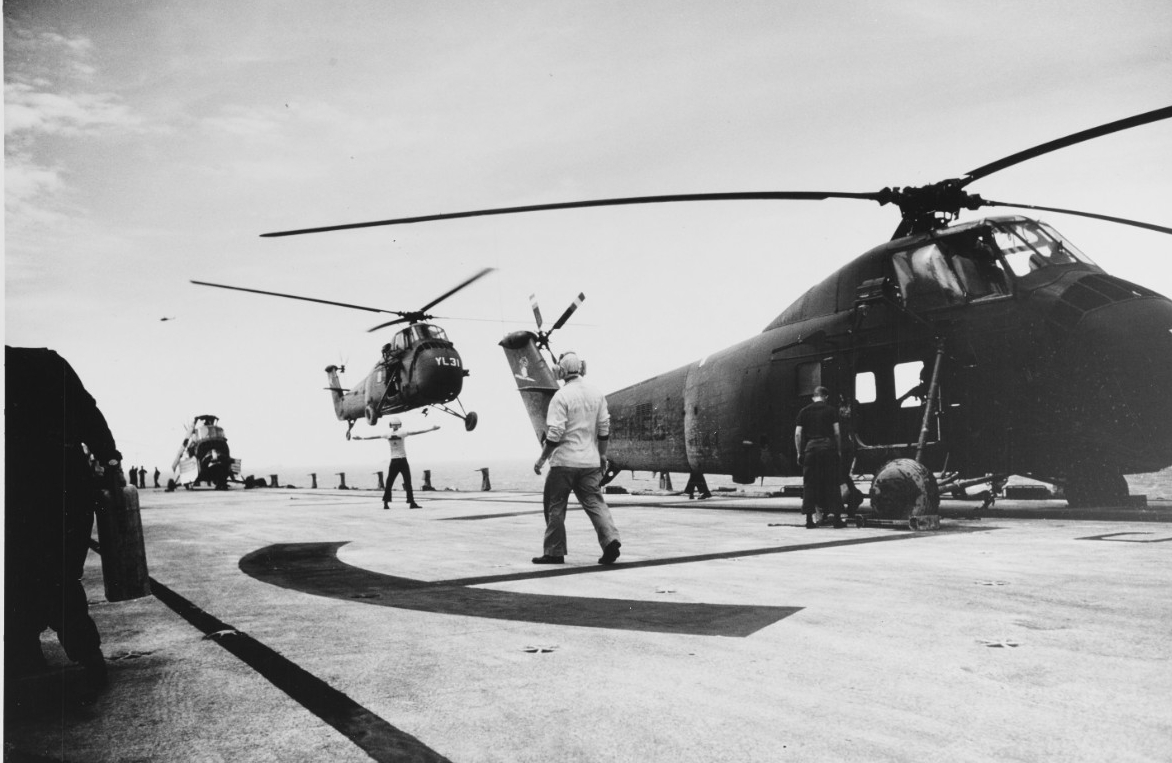 During the first three months of 1966, Iwo Jima remained at San Diego for upkeep and improvement changes. From April through June extensive refresher training occupied all hands as Iwo Jima, prepared for her forthcoming Western Pacific deployment. On 24 July, steaming with a task group, she passed the volcanic island whose costly conquest by stouthearted sailors and marines had inspired her name. On board was one of the marine groups that had landed on Iwo Jima over two decades earlier. After operations in the Vietnam area, she sailed for Japan. The day before New Year's Eve once again found Iwo Jima, on the line and underway for special operations in the Mekong Delta region of South Vietnam in a Navy-ready group with a two pronged punch. Early in January 1967 the commanding officer, Capt. Nils W. Boe, was relieved by Capt. F. X. Timmes. Upon his departure Boe said of his crew in a family-gram to mothers and wives, "I want to thank each of you for letting me borrow these magnificent young men for a little while. They have made me feel ten feet tall." On 1 July 1967, Iwo Jima was reassigned to Amphibious Squadron 3 from Amphibious Squadron 1, with which she continued to sail with the Pacific Fleet.