Daniel Webster was born 18 January 1782, in Salisbury [Franklin], New Hampshire. After a brief stint as a schoolteacher, he entered Dartmouth College in 1797, where he earned a reputation as a superb author and orator. After his graduation in 1801, Webster began studying law under his neighbor Thomas W. Thompson.

On 20 July 1804, Webster moved to Boston, Massachusetts and continued his apprenticeship under the tutelage of former United States Attorney Christopher Gore. Less than a year later, the Suffolk, Mass., Court of Common Pleas admitted Webster to the bar.

Approximately three months after Webster moved to Portsmouth, N.H., in September 1807, President Thomas Jefferson signed the Embargo Act. Imposed in retaliation for violations of American neutrality during the Napoleonic Wars, the act was an economic disaster for Webster’s law practice and coastal cities like Portsmouth. Webster enthusiastically authored multiple letters, pamphlets and newspaper articles in support of the anti-Jeffersonian Federalist Party beginning in 1808. Pleased by his defense of their state, New Hampshire voters elected Webster to the U.S. House of Representatives in 1812. 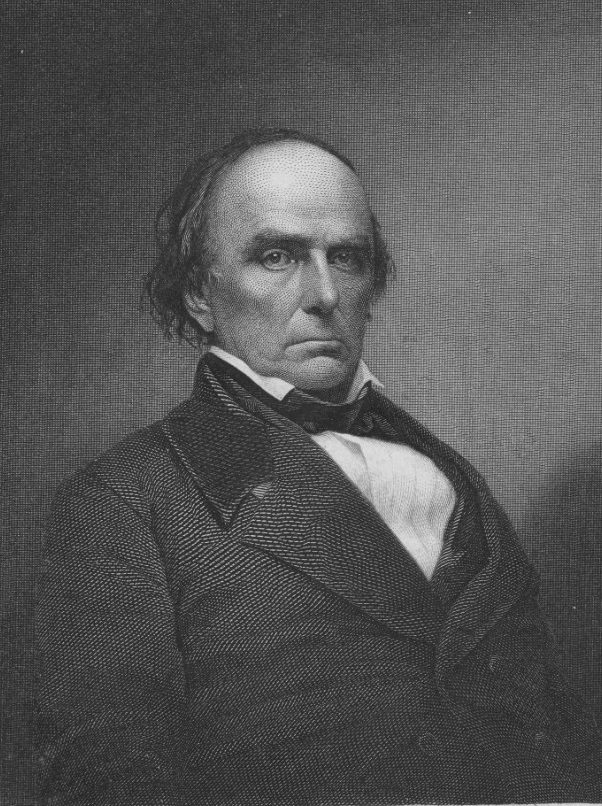 During his first term in Congress, Webster continued to practice law, arguing claims cases against the British Admiralty on appeal before the U.S. Supreme Court beginning in 1814. Three years later, Webster declined to seek a second term and moved to Boston in March 1817. A year later, he argued his first major case in front of the Supreme Court. In Dartmouth College v. Woodward, Webster successfully contended that Article I Section 10 of the Constitution, commonly known as the Contract Clause, prohibited New Hampshire from placing private businesses like Dartmouth College under state control. A year later Webster successfully argued in McCulloch v. Maryland that the Constitution was the “Supreme law of the land” and allowing states to levy taxes on a federal institution would give them the power to override the federal government.

On 4 March 1823, Webster returned to Congress as the representative from Massachusetts 1st district. Four years later, the state legislature elected him to the U.S. Senate. In the early 1830s, Webster became a vocal critic of President Andrew Jackson, ultimately voting to censure Jackson and Secretary of State Roger Taney in 1834 for their attempts to undermine the Second Bank of the United States. Shortly after his vote, Webster joined the newly formed Whig Party.

In January 1835, a caucus in the Massachusetts legislature nominated Webster for President. Running as one of three Whig candidates in the election of 1836, Webster only garnered fourteen electoral votes. Despite the lopsided defeat, he returned to the Senate and became a vocal critic of President Martin van Buren’s policies over the next four years.

With Tyler’s support, Webster negotiated the settlement of the long-running dispute over the location of the boundary between Aroostook County, Maine and New Brunswick, Canada. Signed by Taylor on 8 August 1842 and ratified by the Senate eleven days later, the Webster-Ashburton Treaty resolved the border dispute. This goal accomplished; Webster resigned his position on 8 May 1843. Two years later, Webster returned to the Senate.

On 20 July 1850, President Millard Filmore nominated, and the Senate confirmed, Webster as the nineteenth Secretary of State. Several months later in the spring of 1851, he began meeting with merchant Aaron H. Palmer to discuss the expansion of American trade into Japan. On 9 May 1851, Webster informed Secretary of the Navy William A. Graham that Captain John A. Aulick, who had previously been assigned to command the East India Squadron, would instead lead a mission to repatriate seventeen Japanese sailors rescued at sea and negotiate a treaty that would begin “commercial relations with the Empire of Japan.” After Fillmore relieved Aulick for alleged misconduct, Webster conveyed the same instructions to Commodore Matthew C. Perry, who sailed for Japan in November 1852.

Exhausted from long hours at the Department of State, Webster returned home to Boston in late April 1852. Early on 8 May, he set out for a day of trout fishing. The transom bolt on his buggy snapped, throwing Webster to the ground. He sustained a severe head injury, sprained both wrists, and bruised his left arm in the accident.

Despite his injuries, Webster hoped to win his party’s nomination for the presidency when the Whig Party convention met on 16 June 1852. Webster garnered only 29 votes on the first ballot and lost support on each successive ballot. General Winfield Scott ultimately won the party’s nomination on the 52nd ballot. Webster’s health worsened after the electoral defeat, forcing him to resign as Secretary of State on 18 October. He died six days later.

Daniel Webster (SSBN-626) was laid down on 28 December 1961, at Groton, Conn. by the Electric Boat Division of General Dynamics Corp.; launched 27 April 1963, and sponsored by Mrs. Mary E. Goodrich, the great-great granddaughter of Daniel Webster. 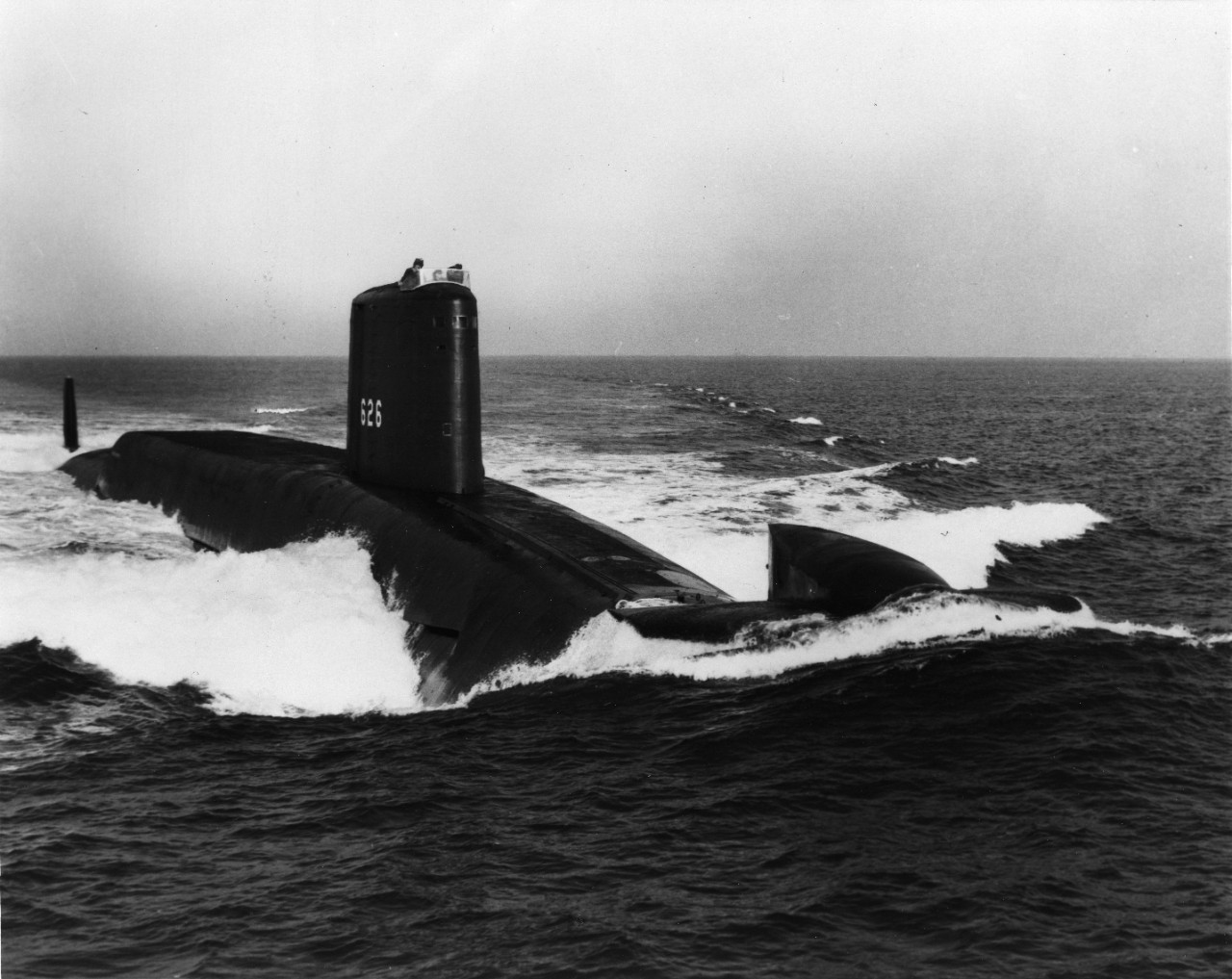 Daniel Webster emerged from the shipyard in November 1969. Reassigned to SubRon Fifteen, she proceeded southward en route to the Pacific Ocean via the Panama Canal. In early 1970, she and Guardfish (SSN-612) became the first two nuclear submarines to meet in the canal. Shortly thereafter, she reported to her new homeport at Naval Base Guam, Marianas Islands.

On 7 March 1970, Daniel Webster began the first of eighteen deterrent patrols in the Pacific Ocean. The Navy awarded her a Meritorious Unit Commendation for two of these patrols (7 March–1 October 1970 and 1 December 1970–31 December 1971). 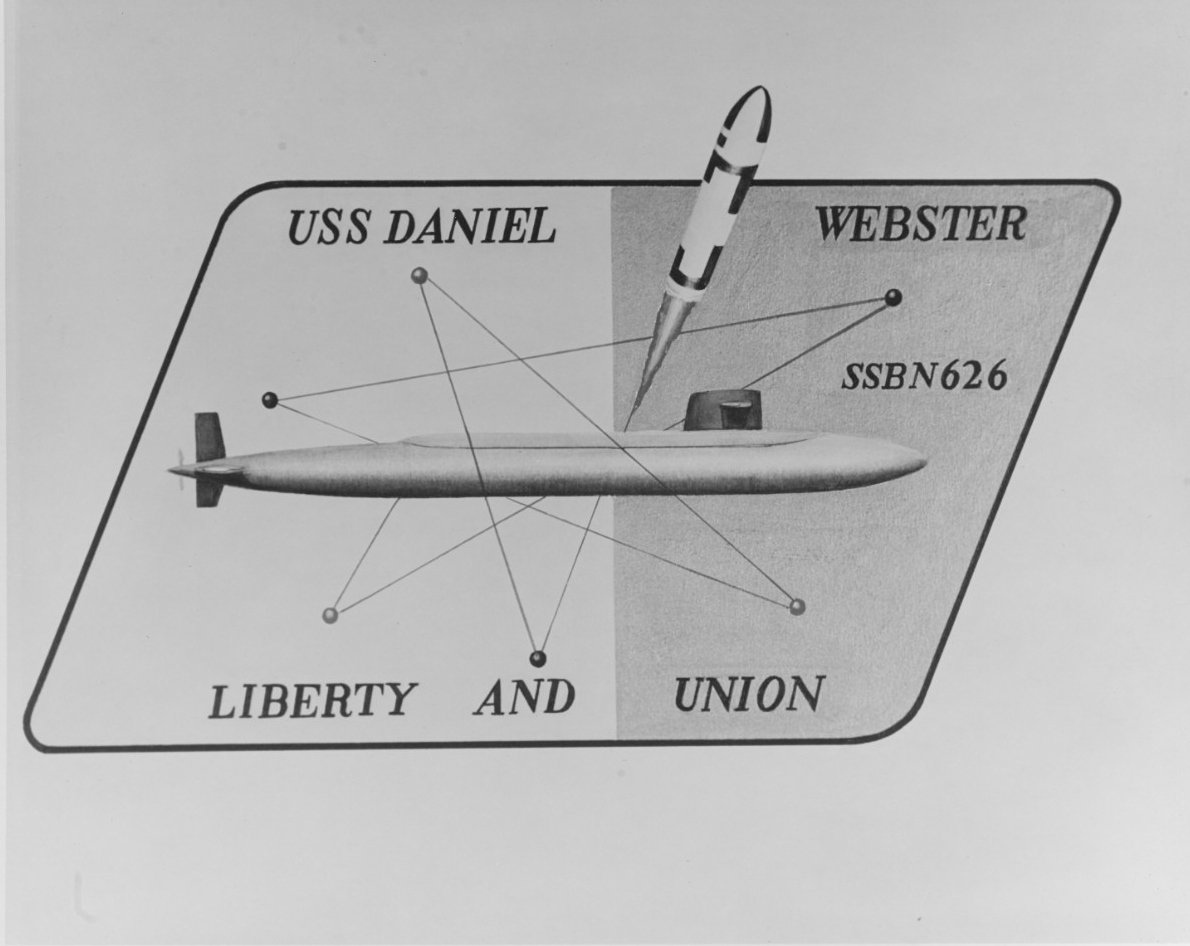 Scheduled for conversion to the UGM-73 Poseidon submarine-launched ballistic missile system, Daniel Webster proceeded eastward through the Panama Canal, and moored at Electric Boat on 21 November 1975. In addition to the conversion of her weapons system, shipyard workers relocated her unique bow planes to her sail as fairwater planes.

The submarine completed overhaul stood out of the shipyard on 21 February 1978. During her post-overhaul Demonstration and Shakedown Operations, Daniel Webster launched a UGM-73A Poseidon on 29 March. Reassigned to SubRon Fourteen, Daniel Webster subsequently proceeded across the Atlantic Ocean to Holy Loch, Scotland. She deployed from Holy Loch on her 36th deterrent patrol in October.

Daniel Webster accomplished multiple milestones during the 1980s. She completed her 50th deterrent patrol on 28 October 1982, launched two Poseidons during an operational test on 2 September 1985 and won the SubRon Fourteen Battle Efficiency or Battle “E” award for Fiscal Year 1986.

Daniel Webster completed her 77th and final deterrent patrol and returned to Charleston, S.C., in February 1990. The Navy decommissioned Daniel Webster and struck her from the Naval Vessel Register on 30 August 1990. After decommissioning, the Charleston Naval Shipyard converted the ex-Daniel Webster into a moored training ship. She was subsequently re-designated MTS-626 and towed up the Cooper River to the Nuclear Power Training Unit Charleston.