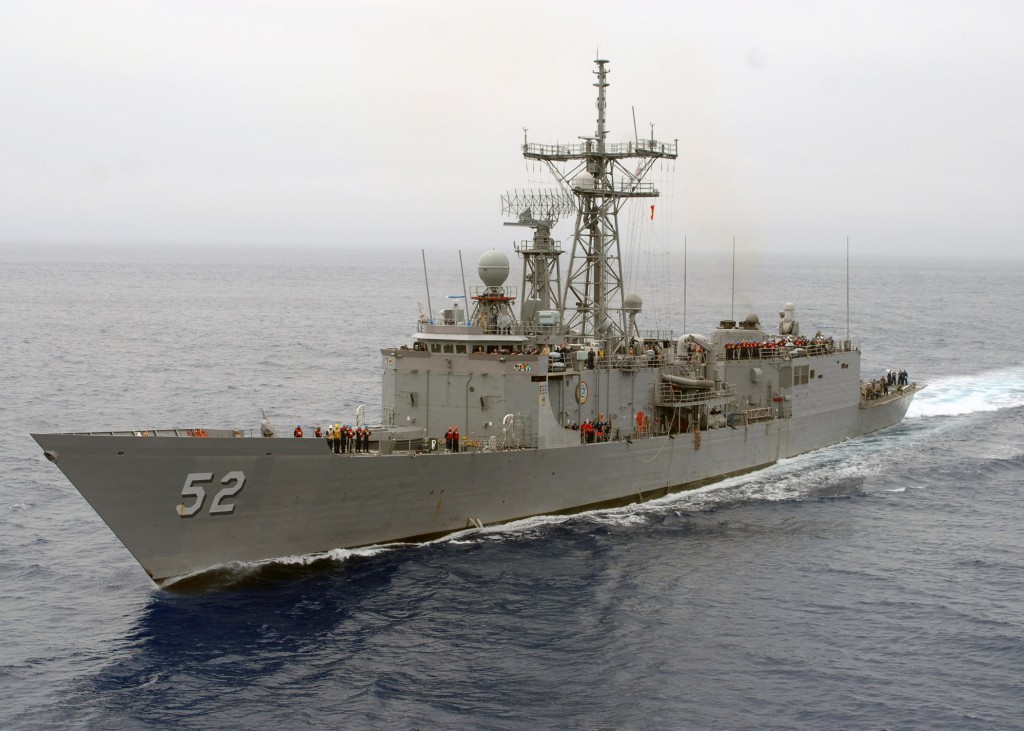 Paul Henry Carr was born on 13 February 1924, at Webber Falls, Oklahoma. After joining the Navy on 27 May 1942, he received orders to escort ship Samuel B. Roberts (DE-413) in April 1944. During the Battle off Samar, on 25 October 1944, Gunners Mate Third Class Carr served as gun captain of Mount 52. After firing approximately 300 rounds, Mount 52 lost power. After managing to fire several more shots from the overheated gun, a round suddenly cooked off, blowing the gun apart and killing several of the crew. Although grievously wounded, GM3 Carr remained at his station, repeatedly attempting to load the last remaining shell into the destroyed gun by hand. With the battle still raging around him, GM3 Carr died of his wounds shortly before Samuel B. Roberts sank due to enemy shellfire. Petty Officer Carr received the Silver Star award posthumously for his heroic actions during the battle. 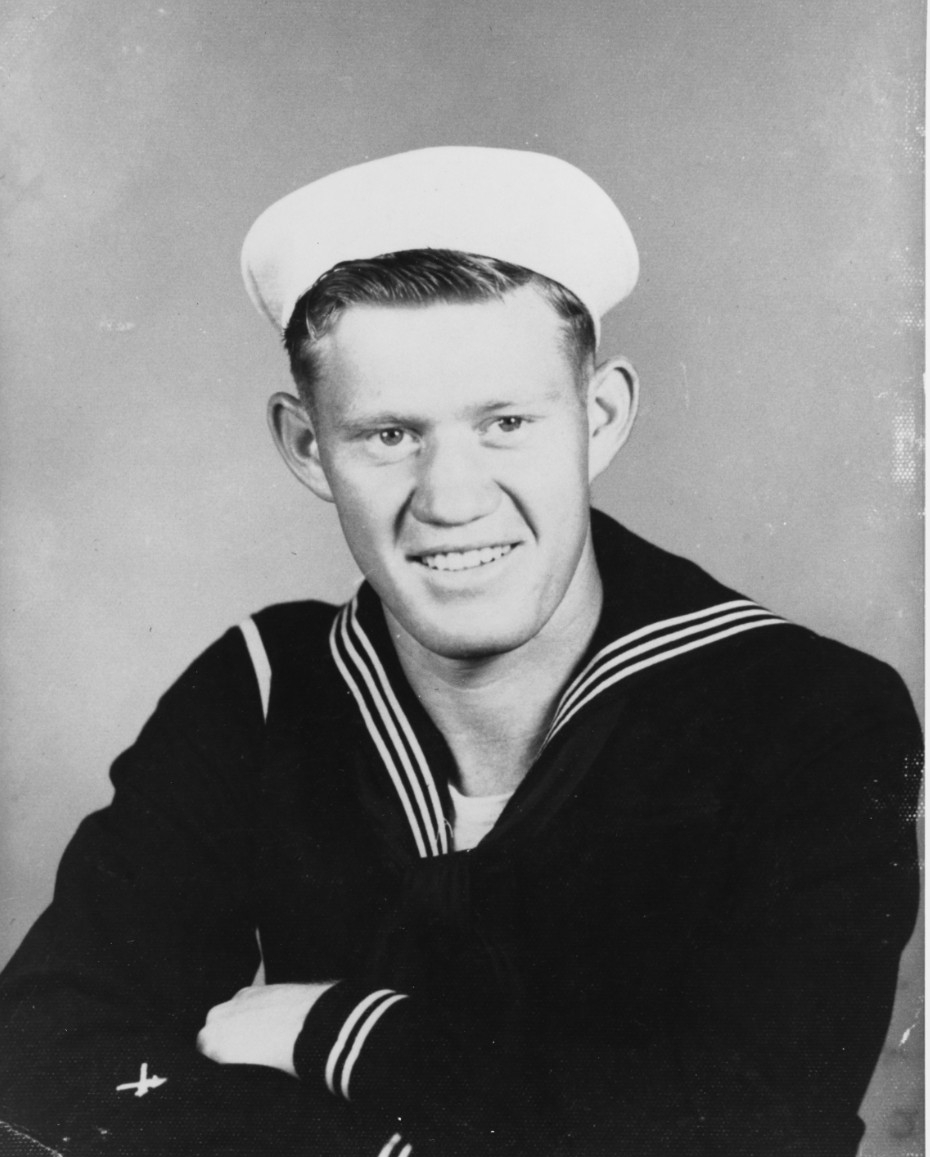 The first U.S. naval vessel named for Paul Henry Carr was laid down on 26 March 1982, at Seattle, Wash., by the Todd-Pacific Shipbuilding Corp.; launched on 26 February 1983 and sponsored by Goldie Carr Bensilhe, GM3 Carr’s widow; and commissioned on 27 July 1985, Cmdr. Robert J. Horne in command.

Departing Puget Sound on 26 August 1985, Carr was the last Oliver Hazard Perry-class warship built by Todd Seattle. Only two days underway, she encountered the Aleutian Seattle, a sea-battered fishing boat sinking off the California coast. Within hours, Carr rescued the crew and salvaged the fishing boat, retaining it until a Coast Guard cutter could tow it to safe waters.

On 30 September 1985, Carr arrived at her new homeport of Charleston, S.C. In a dizzying 45 days of training off Guantanamo Bay, Cuba, she fired off two SM-1 missiles and experienced Combat Sea Systems Qualification Trials. Later in the year, she underwent anti-submarine warfare (ASW) training.

In March 1986, Carr embarked with Commander, Destroyer Squadron (ComDesRon) 36. The guided-missile frigate arrived at the Bath Iron Works, Portland, Maine, on 4 August 1986, for an upkeep period lasting until early February 1987. Later that summer, Carr participated in FLEETEX 4-87 off the Florida coast and began preparing for her first deployment. Getting underway on 22 September, the guided-missile frigate made way for the Persian Gulf. Carr’s assignment upon initial transit through the Straits of Hormuz was escorting the first U.S. minesweepers into the Persian Gulf.

While approximately 60 miles due east of Cape Canaveral, Fl., on 24 April 1988, Carr received a radio transmission from submarine Bonefish (SS-582). As the submarine was seemingly in distress, Carr proceeded at high speed to her last known position. Arriving on scene, she found Bonefish’s crew abandoning ship due to intense fire throughout the submarine. With three Bonefish crewmembers already dead, Carr maneuvered in close, evacuating 18 injured submariners. Within two hours, all surviving 89 crewmembers from Bonefish were on board Carr, and then debarked at Mayport.

On 30 October 1989, Carr got underway for another deployment to the Middle East. She conducted various exercises while remaining on station in the Persian Gulf, including PASSEX, on 28 November.

Carr patrolled the Caribbean in support of law enforcement operations in August 1990. On 7 August, she made a high-speed run north to a position where a suspected illegal airdrop was to occur. Two days later, she boarded two vessels suspected of smuggling narcotics. Transiting the Panama Canal on 3 April 1991, a first for many of the crew, Carr quickly began counter-narcotics operations in the eastern Pacific. She assisted in a large cocaine seizure on 14 April before returning to her new homeport in Norfolk, Va., at the end of the month.

In support of Sixth Fleet operations in the Gulf of Aqaba, Carr had the honor of being the first ship to conduct a boarding of a merchant vessel while inport at Aqaba, Jordan, on 13 February 1992. Two days later, she conducted four more boardings, bringing her total boardings for two months to 57. By the end of March, Carr broke the 100-boarding milestone, the most ever conducted by a single ship since the inception of Multinational Interception Force (MIF) operations in the Red Sea area.

While in Detyen’s Shipyard, Charleston, S.C., from January-February 1993, Carr underwent minor repairs, including the painting of her hull. On 19 April, approximately 40 family members and veterans from the Samuel B. Roberts Survivors Association and two sisters of GM3 Paul Carr were on board for a tour of the ship.

Departing on 12 January 1994, Carr got underway with Saratoga’s (CV-60) Joint Task Group for a six-month Mediterranean deployment. Carr returned to Charleston on 24 June, and after a brief upkeep period, steamed to Cuba to conduct counter-narcotics operations.

After spending most of 1995 in Detyen’s Shipyard, Charleston, for an overhaul period, the guided-missile frigate began work-ups until deploying on a Mediterranean cruise from January-April 1997. After a quick repair period, she steamed for New York City in October to participate in Fleet Week.

Receiving the Battle Efficiency ‘E’ award on 17 March 1998, Carr deployed to the Middle East (July 1998-January 1999) in company with destroyer Hayler (DD-997) to support MEF 98-3. In December, she participated in Operation DESERT FOX, a four-day action against Iraqi military targets, before returning to her new homeport at Naval Station Norfolk.

Carr conducted a Southern Mediterranean and Persian Gulf deployment in the spring of 2001. During the 9/11 attacks, she was pier side at Naval Base Norfolk. On 3 October, a major class “C” fire broke out on the SPS-49 radar. The at-sea fire party de-energized the system, combated the fire and smoke, and set the re-flash watch, saving Carr from further damage.

Underway on 5 February 2003, Carr steamed for the Mediterranean Sea, arriving at the Suez Canal on the 23rd. After entering the Persian Gulf on 7 March, Carr participated in the commencement of Operation IRAQI FREEDOM on the 19th. She returned to Norfolk on 22 August, having provided Armed Air Surveillance (SHOTGUN) for carriers Constellation (CV-64), Abraham Lincoln (CVN-72), and Kitty Hawk (CV-63).

In 2006, Carr received DesRon’s Arleigh Burke Trophy from Commodore Clifford S. Sharpe, ComDesRon 2. Como. Sharpe noted that one of the deciding factors of the award was the exceptional performance of the guided-missile frigate’s engineering department. Carr also earned the Maritime Warfare Excellence Award and three other safety- and crew-specific awards.

Carr again made way for the Persian Gulf on 1 August 2007, participating in Operations IRAQI FREEDOM, ENDURING FREEDOM, and SEA DRAGON. She returned to Naval Base Norfolk on 25 January 2008. In July, Carr completed exercise Operation BRIMSTONE, playing the role of the opposition force against the Theodore Roosevelt (CVN-71) Carrier Strike Group and Iwo Jima (LHD-7) Expeditionary Group. Over 80 aircraft and 15,000 personnel, including ships from the French, British, Peruvian, and Brazilian navies participated.

In 2009, Carr successfully executed a fourth counter-illicit trafficking deployment. From April-July, she steamed on the eastern Pacific side of the Panama Canal, successfully completing a major bust of cocaine off the coast of Peru while en route to Mexico and then the United States. 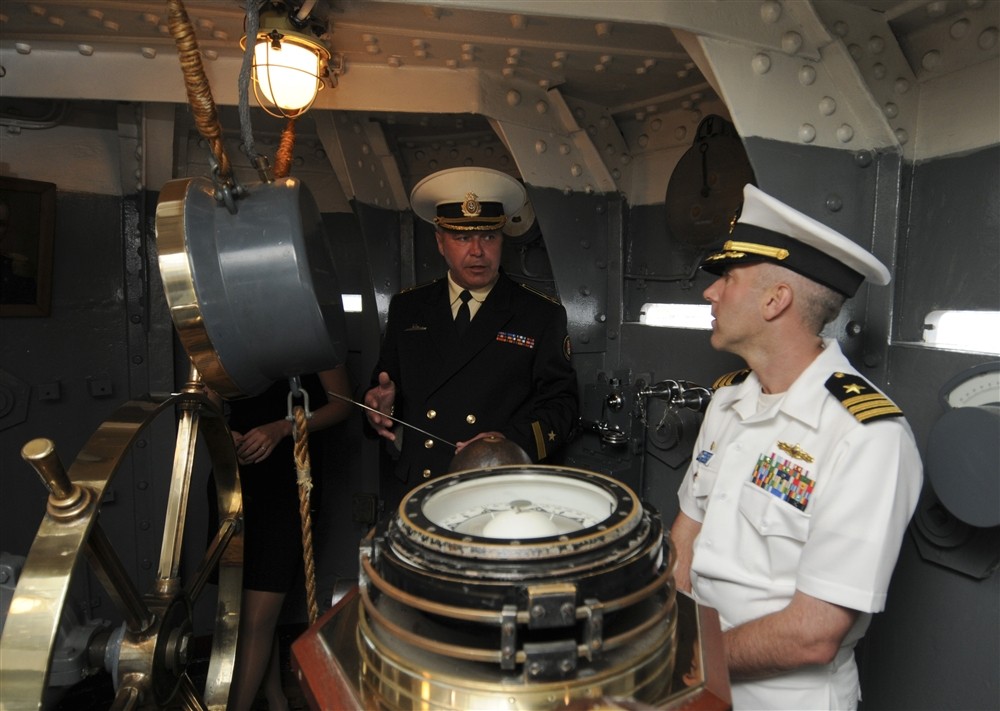 ST. PETERSBURG, Russia (28 June 2011) Cmdr. Patrick E. Kulakowski, commanding officer of the guided-missile frigate Carr (FFG-52), was given a tour of the Russian navy cruiser Aurora, by Russian navy Capt. Bragin Yevgeniy, commanding officer of Aurora during an office call to meet with senior Russian navy leaders. Carr was homeported out of Norfolk, Virginia, and was on a scheduled three-month deployment supporting maritime security operations and theater security cooperation efforts in the U.S. 6th Fleet area of responsibility.

Departing for her final deployment in June 2012, Carr focused on countering trans-national organized crime (previously referred to as counter-narcotics operations) in the Caribbean and Eastern Pacific. During the deployment, the guided-missile frigate retrieved 1,250 pounds of cocaine.  She was resupplied by an airdrop at sea during Operation MARTILLO on 15 August, and returned to Norfolk on 3 December.

Carr was decommissioned on 13 March 2013 and remains at the Naval Inactive Ship Maintenance Facility (NISMF) in Philadelphia awaiting possible sale to a foreign navy.