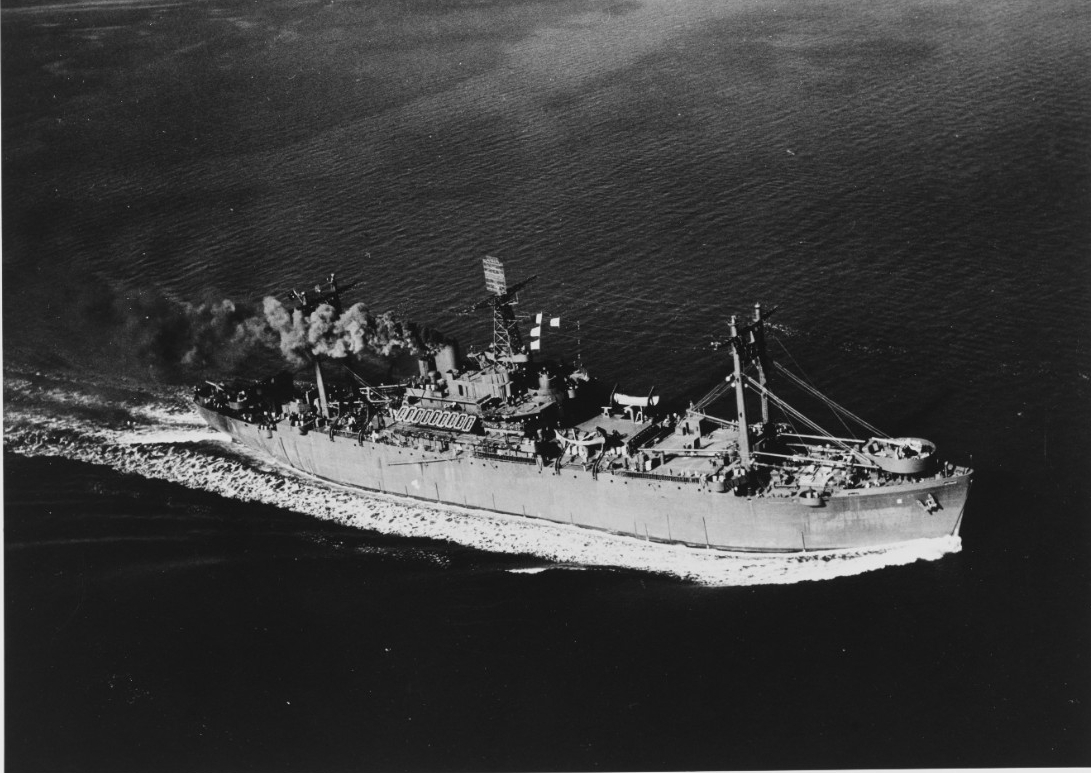 Blue Ridge (AGC-2) underway on 6 October 1943. Though this photograph was released for publication on 1 March 1946, it was actually taken shortly after Blue Ridge was commissioned. Official U.S. Navy photograph from the collections of the Naval History and Heritage Command. NH 107681.

The name given to the eastern and southeastern ranges of the Appalachian Mountains that extend south from a point near Harper’s Ferry, W. Va., across Virginia and North Carolina into northern Georgia.

The second Blue Ridge (AGC-2) was laid down under a Maritime Commission contract (M. C. Hull 201) on 4 December 1942 at Kearny, N.J., by the Federal Shipbuilding Corp.; launched on 7 March 1943; sponsored by Mrs. David Arnott; delivered to the Navy on 15 March 1943; converted for naval service at the Bethlehem Steel Co. yard in Brooklyn, N.Y.; and commissioned on 27 September 1943, Lt. Cmdr. Lewis R. McDowell in command.

After completing trials in Long Island Sound and loading stores at New York, the amphibious force command ship put to sea on 7 October, bound for the Chesapeake Bay. There, she conducted a brief period of shakedown training before departing Norfolk, Va., on 1 November. Steaming in company with Dickerson (APD-21) and Warren (APA-53), she shaped a course via Guantanamo Bay, Cuba, for the isthmus of Panama. The three ships arrived in the Canal Zone on 5 November. After transiting the canal, they parted company. While Warren headed north to San Diego, Blue Ridge and Dickerson shaped a course for the southwestern Pacific. Later in the voyage, this pair also parted company, Dickerson bound for duty with Espiritu Santo-Guadalcanal convoys and Blue Ridge bound ultimately for Australia. Along the way, she made stops in the Society Islands, the Tonga Islands, and at Noumea on the island of New Caledonia before arriving in Brisbane on 16 December.

There, she embarked portions of the staff of Rear Adm. Daniel E. Barbey, Commander, Seventh Amphibious Force (PhibFor). On the 18th, she returned to sea and proceeded to Milne Bay, New Guinea, where she arrived on Christmas Eve. Rear Admiral Barbey and the rest of his staff embarked that same day. On 28 December 1943, the amphibious force flagship departed Milne Bay for Cape Sudest, New Guinea, arriving there that same day. For the next several months, Blue Ridge operated in the coastal waters of northern New Guinea between Cape Sudest and Buna, engaging in drills and preparations for the Hollandia invasion in April. Though plans for that operation were made in Blue Ridge, the amphibious force command ship did not actually participate in the invasion itself. For that mission, Rear Adm. Barbey left her in the operating area near Cape Sudest and embarked in Swanson (DD-443). Her evolutions around Cape Sudest continued until 4 June at which time the ship headed, via Milne Bay, to Sydney, Australia. She underwent repairs there from 11 June to 3 July. Following those repairs, she visited Brisbane and Townsville before shaping a course for Milne Bay on 10 July. She stopped overnight at Milne Bay on 11 and 12 July and, briefly, at Cape Cretin on the 13th before entering Humboldt Bay at Hollandia on the 15th to resume duty as flagship for Seventh PhibFor.

For the remainder of the summer, she made preparations for the invasion of the Philippines. Finally, on 13 October 1944, Blue Ridge stood out of Hollandia as flagship for the Northern Attack Force, Task Force (TF) 78. Seven days later, she entered San Pedro Bay, Leyte. That same day, Army forces stormed ashore at Leyte. The fleet assembled in Leyte Gulf came under air attack from the very first, but Blue Ridge did not enter the battle until the fourth day when she fired upon an enemy reconnaissance plane. The following day, her antiaircraft batteries engaged a single Aichi D3A Type 99 carrier bomber [Val] dive bomber but failed to score. At about 0740 on the 25th, her gunners recorded their first tally when her forward 40-millimeter battery splashed a "Sally" twin engine bomber. That heralded the opening of the hard-fought air battles of 25 October 1944. Throughout the day, the anchorage, including Blue Ridge, came under successive air attacks. During the afternoon, she engaged about 15 different aircraft in various attacks, but claimed only to have damaged a "Nell" twin engine bomber. The attacks continued on the 26th, but Blue Ridge departed the area for Hollandia that afternoon. She arrived at her destination on 30 October.

At Hollandia, the ship and Seventh PhibFor staff began planning and making preparations for the Lingayen Gulf assault on Luzon. She departed Aitape, New Guinea, on 28 December 1944 with Rear Adm. Barbey and two Army major generals embarked. She made the passage through the Mindanao Sea without incident, but sporadic enemy air raids harassed the formation while it transited the Sulu Sea and steamed north along the Luzon coast. During the early hours of 9 January 1945, D-day for Lingayen, she entered the gulf with the other ships of the invasion force. The assault troops charged ashore at about 0940. Though air raids constantly harassed the transport area during her stay at Lingayen, Blue Ridge remained largely unmolested opening fire on only three occasions and claiming no hits then.

On 15 January 1945, the amphibious command ship departed Lingayen Gulf for Leyte. She returned to Luzon, at Subic Bay on 6 February. From that time to 9 June, she made shuttles between Subic Bay and Manila. On 10 June, she departed the Philippines bound for Pearl Harbor. Along the way, she made a stop at Saipan in the Marianas. Blue Ridge arrived in Pearl Harbor on 28 June and began an overhaul in the navy yard there. 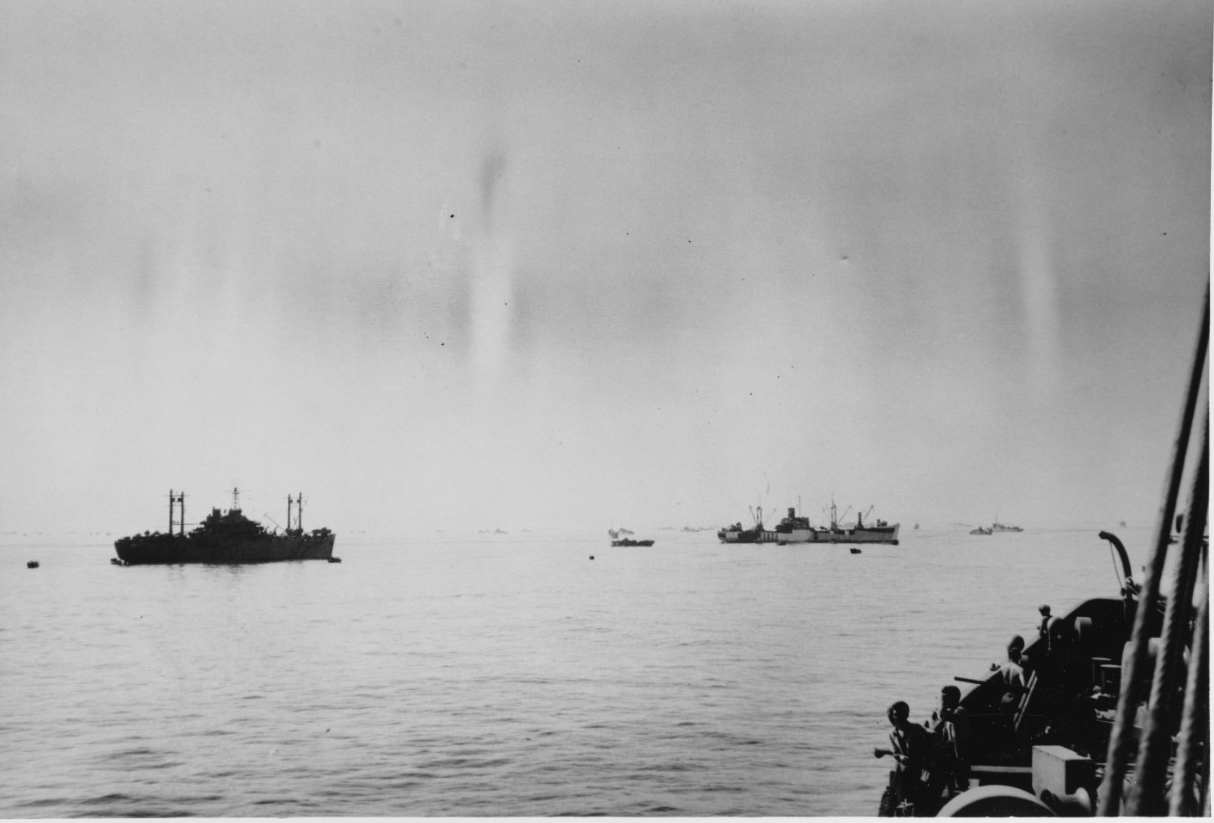 While she was undergoing repairs, the war ended, and the formal surrender ceremony took place. The overhaul was completed on 8 September 1945, and Blue Ridge put to sea bound for the western Pacific. She arrived at Okinawa on 22 September and began duty as command ship for Rear Adm. Ingolf N. Kiland, Commander, Amphibious Group 7.

From there, Blue Ridge moved to China and engaged in occupation duty at Shanghai until February 1946. She then headed back to the United States and arrived at San Pedro, Calif., on 18 March 1946. The ship later shifted to San Francisco where she remained until the second week in June. On the 12th of that month, she departed San Francisco, bound for the Central Pacific.

On 28 June 1946 at Kwajalein in the Marshalls, she embarked 100 observers, including many flag and general officers, for Operation Crossroads and carried her VIP passengers to the Bikini Atoll area to observe the atomic bomb tests conducted there. On 30 July, after about a month at the test site, Blue Ridgeheaded back to San Francisco where she arrived on 15 August. Although she was berthed with the Pacific Reserve Fleet sometime late in 1946, the ship remained in commission until 14 March 1947 when she was formally decommissioned.

Blue Ridge remained with the San Francisco Group, Pacific Reserve Fleet, for almost 13 years. On New Year's Day 1960, her name was stricken from the Navy Register. The ship was sold to Zidell Explorations, Inc., of Portland, Ore., on 26 August 1960, and she was scrapped by that firm soon thereafter.