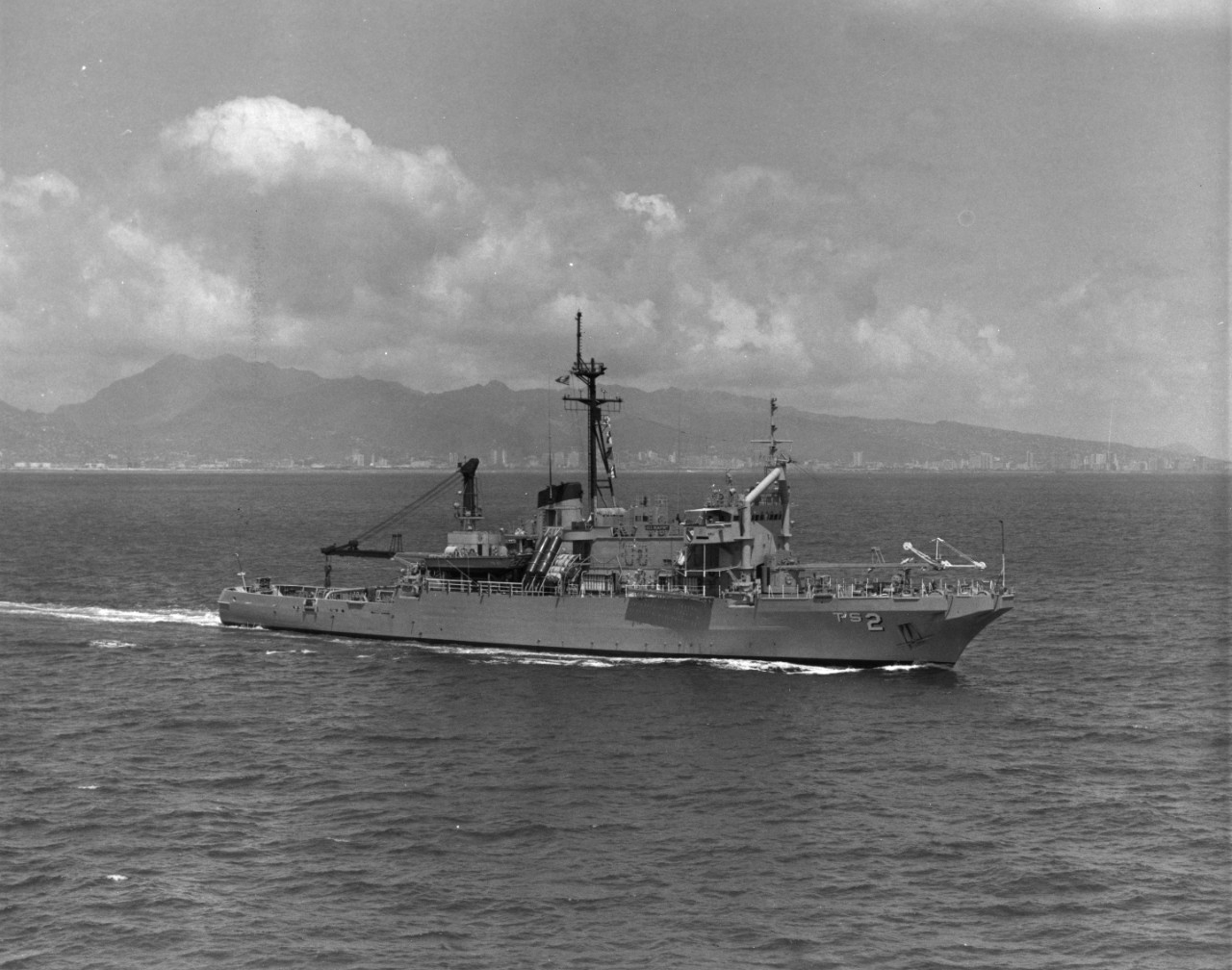 A city in far southern South Carolina, and the seat of government for Beaufort County.


The fifth Beaufort (ATS-2) was laid down on 19 February 1968 at Lowestoft, England, by Brooke Marine Ltd.; launched on 20 December 1968; sponsored by Mrs. Waldemar F. A. Wendt; delivered to the Navy at the Norfolk Naval Shipyard on 5 January 1972; and commissioned there on 22 January 1972, Lt. Comdr. Arthur R. Erwin in command.

Beaufort completed outfitting at the Norfolk Naval Shipyard on 5 April 1972 and moved first to the Naval Operating Base, Norfolk, for deperming and thence to Little Creek, Va., to load in preparation for the voyage to Pearl Harbor. She made an overnight stop at one of her namesake cities, Beaufort, S.C., on 14 and 15 April and a two-day visit to Port Royal, S.C., from 15 to 17 April before resuming her voyage to Hawaii. The salvage tug transited the Panama Canal on 24 April and headed up the west coast of North America to San Diego, Calif., arriving there on 3 May. Five days later, Beaufort put to sea on the last leg of her voyage. She arrived in Pearl Harbor on 15 May and became a unit of Service Squadron (ServRon) 5. The ship remained in port until 5 June at which time she began shakedown training in the Hawaiian Islands operating area. The salvage tug completed shakedown training on 23 June and soon began diver and salvage training. August brought final contract trials; and, in September, she resumed salvage training and capability evaluation. Between 13 October and 15 November, she towed the former Observation Island (AG-154) to San Francisco and returned to Pearl Harbor. She arrived back in Pearl Harbor on 15 November and began post-shakedown availability.

That repair period occupied her for the rest of 1972 and ended on 15 March 1973. At that time, she resumed normal operations out of Pearl Harbor. Salvage training kept her busy until 16 May when she got underway for her first deployment to the western Pacific. Beaufort stopped at Midway and Guam before arriving in the Philippines at Subic Bay on 8 June. She conducted operations in the vicinity of Subic Bay until the beginning of July. At that time, the salvage tug got underway for Vietnam. Between 8 and 22 July, she served as a support ship for the minesweepers engaged in Operation "End Sweep," the removal of mines from Haiphong harbor in North Vietnam.

She returned to Subic Bay late in July for a short period of upkeep. From there, the salvage tug went to Naha, Okinawa, to pick up three pontoon barges for towing to Ream, Cambodia. Beaufort departed Naha on 1 August and shaped a course for Ream. Off the coast of South Vietnam, however, she encountered a storm; and all three barges sank. The ship continued on to Ream where she arrived on 14 August. There, she picked up another tow, a Cambodian LCI, for the voyage back to Subic Bay. The salvage tug reached her destination on 19 August. On the 27th, she got underway for Hong Kong where she made a storm-induced, extended port visit. Beaufort departed Hong Kong on 8 September and headed back toward the Philippines. On the approach to Subic Bay, she took Tripoli (LPH-10) in tow and brought her into port on the 10th. She put to sea again on 25 September to help to refloat the grounded USNS Sgt. Jack J. Pendleton (T-AK-276) and returned to Subic Bay from that mission on 9 October. On the 24th, the salvage tug shaped a course for Sasebo, Japan. She arrived in Sasebo on 29 October and remained there until 4 November. On the latter day, Beaufort took two tank landing ships in tow and began the voyage back to Pearl Harbor. She reentered her home port on 28 November and spent the rest of the year in post-deployment leave and upkeep.

From 1 January to 20 May 1974, Beaufort underwent a restricted availability in the Pearl Harbor Naval Shipyard. Following that repair period, she resumed normal operations in the Hawaiian Islands. That employment lasted until 16 August when she stood out of Pearl Harbor in company with USNS Silas Bent (T-AGS-26) bound for Alaskan waters. She operated with Silas Bent until mid-September. On the 18th, the salvage tug parted company with Silas Bent and laid in a course for Bremerton, Wash. She visited Bremerton from 25 September to 10 October and Vancouver, British Columbia, between 10 and 17 October. During the remainder of October, she made calls at Seattle, Wash.; Astoria, Oreg.; Longview, Wash.; Portland, Oreg.; and San Francisco, Calif. On 4 November, Beaufort departed San Francisco to return to Pearl Harbor. She reentered her home port on 10 November and remained there through the end of 1974.

A restricted availability occupied her during most of January 1975. She resumed operations out of Pearl Harbor on the 27th. Type training, diving drills, and local tows kept her busy until 30 June when she entered the Dillingham Shipyard for a pre-deployment restricted availability. Beaufort resumed local operations on 23 August, and they lasted until 8 September when she got underway for the Far East. The salvage tug stopped at Guam from 15 to 19 September and then continued on to the Philippines. She arrived in Subic Bay on the 24th and operated out of that port until 18 November when she set a course for Japan. Between 24 November and 4 December, Beaufort salvaged some amphibious equipment that had been blown to sea by a storm near Numazu, Japan. On 5 December, she put into Sasebo, Japan, for two days of upkeep. She returned to sea on the 7th, bound for Chinhae, Korea, where she spent the period between 9 and 19 December supporting Republic of Korea Navy salvage training operations. On 20 December, she returned to Sasebo and remained there through the end of the year.

Beaufort departed Sasebo on 3 January 1976 and shaped a course for Taiwan. After visits to Keelung and Tsoying, Taiwan, she conducted five days of salvage training with the Taiwanese Navy before heading back to Subic Bay on the 17th. She operated out of Subic Bay until 14 February when she departed the Philippines for Guam towing Kittaton (YTM-406). The salvage tug brought her charge into Apra Harbor on 22 February and, two days later, got underway with Tuscumbia (YTB-762) in tow and headed for Midway Island. Beaufort dropped her tow off at Midway on 6 March and continued her voyage back to Pearl Harbor. The ship arrived at Oahu on 9 March and began a month of post-deployment leave and upkeep. She underwent a restricted availability for the installation of firefighting equipment and new navigational lights during the latter part of April and most of May. She resumed operations out of Pearl Harbor on 27 May. Concluding those operations on 16 August, she reentered the Dillingham Shipyard for a regular overhaul.

The yard work took about a year, occupying the remainder of 1976 and the first eight months of 1977. During the final three months of the overhaul, however, Beaufort put to sea occasionally for tests and evaluations. After 24 May, additional repairs were made at the Pearl Harbor Naval Shipyard. She resumed normal operations in September, conducting refresher training in the local operating area between the 6th and the 25th. Normal operations--salvage training and diving drills--occupied her time until the end of the first week in November. On the 7th, Beaufort stood out of Pearl Harbor on her way to the western Pacific. She arrived at Apra Harbor, Guam, on 18 November. For the next two weeks, she conducted special operations in the Marianas operating area. On 2 December, she broke off the special operations to evade a typhoon at Buckner Bay, Okinawa. On 7 December, she resumed the special operations which lasted until the 14th. The following day, the salvage tug reentered Apra Harbor. She departed Guam on the 22d bound for Korea. She reached Pusan on the 26th but departed again the next day for Chinhae. Beaufort provided support services for Swordfish (SSN-579) from 28 to 31 December and then headed back to Pusan.

Following a visit to that port on 1 and 2 January 1978, the salvage tug weighed anchor for Japan. She arrived at Sasebo on 4 January once again and began a 15-day upkeep period. On 20 January, Beaufort put to sea for Korea once again. She stopped at Chinhae from the 21st to the 23d, then headed for Numazu, Japan, where she conducted salvage operations between 26 January and 9 February. After a stop at Yokosuka on 10 and 11 February, she towed the former Tensaw (YTM-418) to sea for a sinking exercise. She completed that mission on the 17th and laid in a course for Hong Kong. At the end of a four-day call at the British colony, the salvage tug headed for Taiwan where she took part in salvage exercises with elements of the Taiwanese Navy early in March. She returned to Hong Kong on 9 March for an 11-day visit before getting underway for Subic Bay. On her way there, however, she received orders diverting her to the Gulf of Thailand to salvage a downed F-14. From 25 to 31 March, conducted recovery operations on the fighter. On 1 April, Beaufort put into Singapore for a week of liberty and upkeep. She returned to sea on the 9th, bound for surveillance duties in the Trust Territories of the Pacific Islands. That mission continued until 23 April when the ship entered Apra Harbor, Guam, for a two-day port call. On 26 April, she began her voyage home to Oahu. She reached Pearl Harbor on 5 May and began a month of post-deployment leave and upkeep.

On 5 June, Beaufort resumed normal operations with a visit to Lahaina Roads near the island of Maui. There, she conducted a bow-lift exercise on the former Bluegill. Similar duty elsewhere in the Hawaiian Islands and the mid-Pacific operating area occupied her for the rest of the year and into 1979. At the end of January 1979, she entered the Pearl Harbor Naval Shipyard for a restricted availability. Beaufort completed repairs on 11 March and resumed local operations. On 1 April, the salvage tug began preparations for overseas movement and, on the 24th, departed Pearl Harbor for the western Pacific. The ship arrived in Apra Harbor, Guam, on 5 May and operated from that port until the 27th when she got underway for the Philippines. Beaufort stopped at Legaspi between 1 and 4 June before arriving in Subic Bay on the 6th. For the next four months, she performed the usual 7th Fleet duty visiting a number of ports, towing ships, and conducting salvage training. On 29 September, she departed Yokosuka, Japan, to return to Hawaii. Beaufort arrived in Pearl Harbor on 10 October and, after post-deployment standdown, resumed local operations on 13 November.

Duty out of Pearl Harbor occupied her time through the next nine months. On 25 August 1980, she got underway for the west coast of the United States. The ship reached Oakland, Calif., on 1 September and remained there until the 7th. Beaufort headed back to Hawaii on 8 September and arrived there on 15 September. Five days later, she got underway for the western Pacific. The salvage tug arrived in Apra Harbor, Guam, on 6 November. Following a nine-day stopover at Guam, Beaufort weighed anchor for the Philippines. En route, she conducted a surveillance mission in the Trust Territories of the Pacific Islands. On 26 November, the salvage tug arrived in Subic Bay but remained only until the 30th when she embarked upon a voyage which took her to Thailand and Singapore. Beaufort returned to Subic Bay on 2 January 1981. She operated out of that port until 6 April when she got underway for home. The ship stopped at Guam on 12 April but continued her voyage east on the 13th. Beaufort reentered Pearl Harbor on 28 April and remained there until 8 June when she resumed operations in the Hawaiian Islands.

Beaufort was decommissioned on 8 March 1996 and was struck from the Navy list on 12 December 1996. She was disposed of through the Security Assistance Program, transfer and cash sale of the hull.