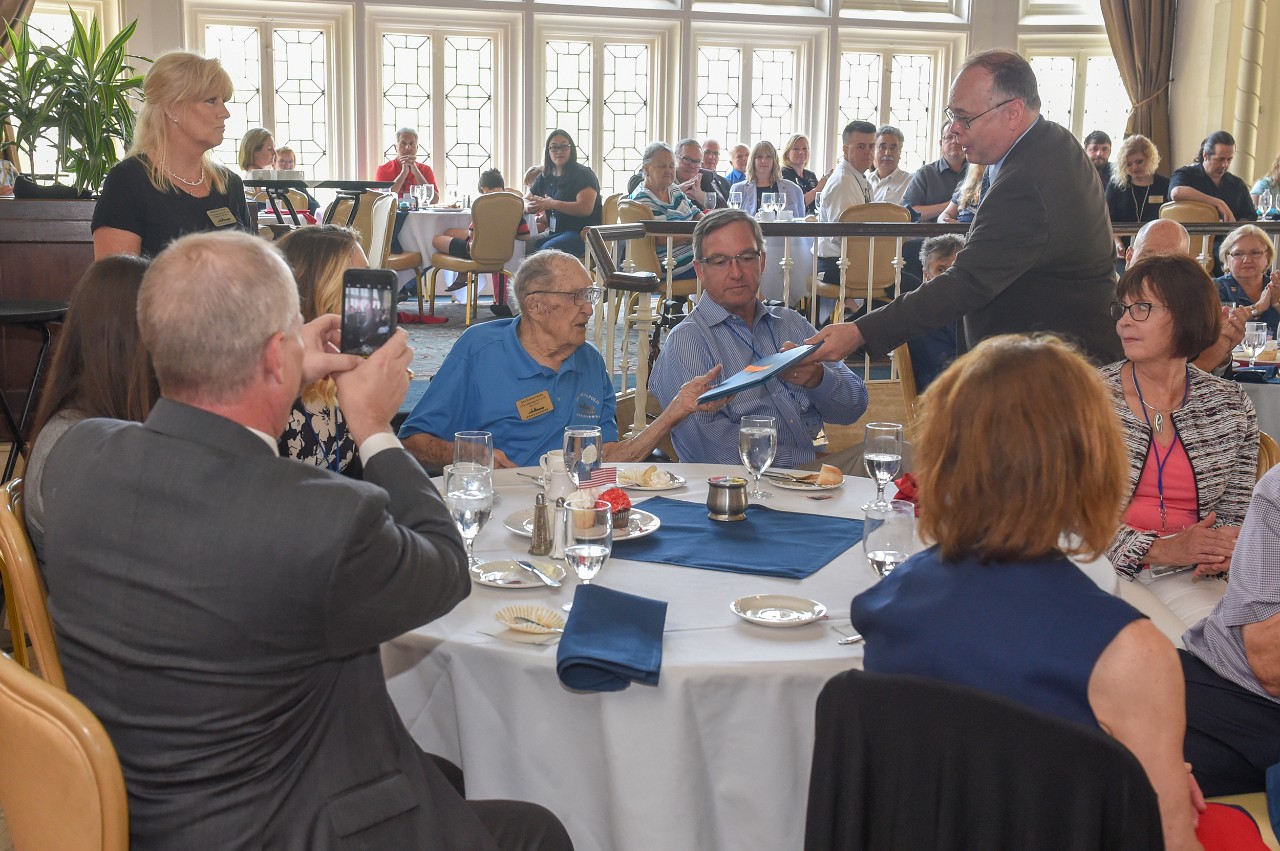 Caption: (July 20, 2018) Rear Adm. Sam Cox (Ret.), Director of Naval History and Heritage Command, right, presents Arthur Leenerman, an Indianapolis survivor, with a certificate of appreciation during the 2018 USS Indianapolis reunion at the Columbia Club of Indianapolis, July 20. During the luncheon, Cox also presented the survivors who were able to attend with color photo copies of their own handwritten statements taken by the board of inquiry in the aftermath of the ship’s loss. (U.S. Navy photo by Mass Communication Specialist 2nd Class Lindsay A. Preston/Released)

The Director of the Naval History and Heritage Command as well as one of the command’s historians joined the survivors of World War II cruiser USS Indianapolis (CA-35) and their families for a luncheon at the Columbia Club of Indianapolis, July 20.

As part of the annual reunion of the USS Indianapolis Survivors Organization, Rear Adm. Sam Cox, U.S. Navy (Ret.), and Richard Hulver, Ph.D. participated in a panel discussion about the past year’s many developments in the history of the ship.

“It’s always important to remember the valor and sacrifice of the men and women who served in the U.S. Navy and paid the ultimate price for the freedom we have today,” said Cox. “This is an example of a ship that did its duty, was lost in action and it was a very tragic event. Even in the midst of tragedy there was extraordinary courage that needs to be remembered and this is an opportunity to do that.” 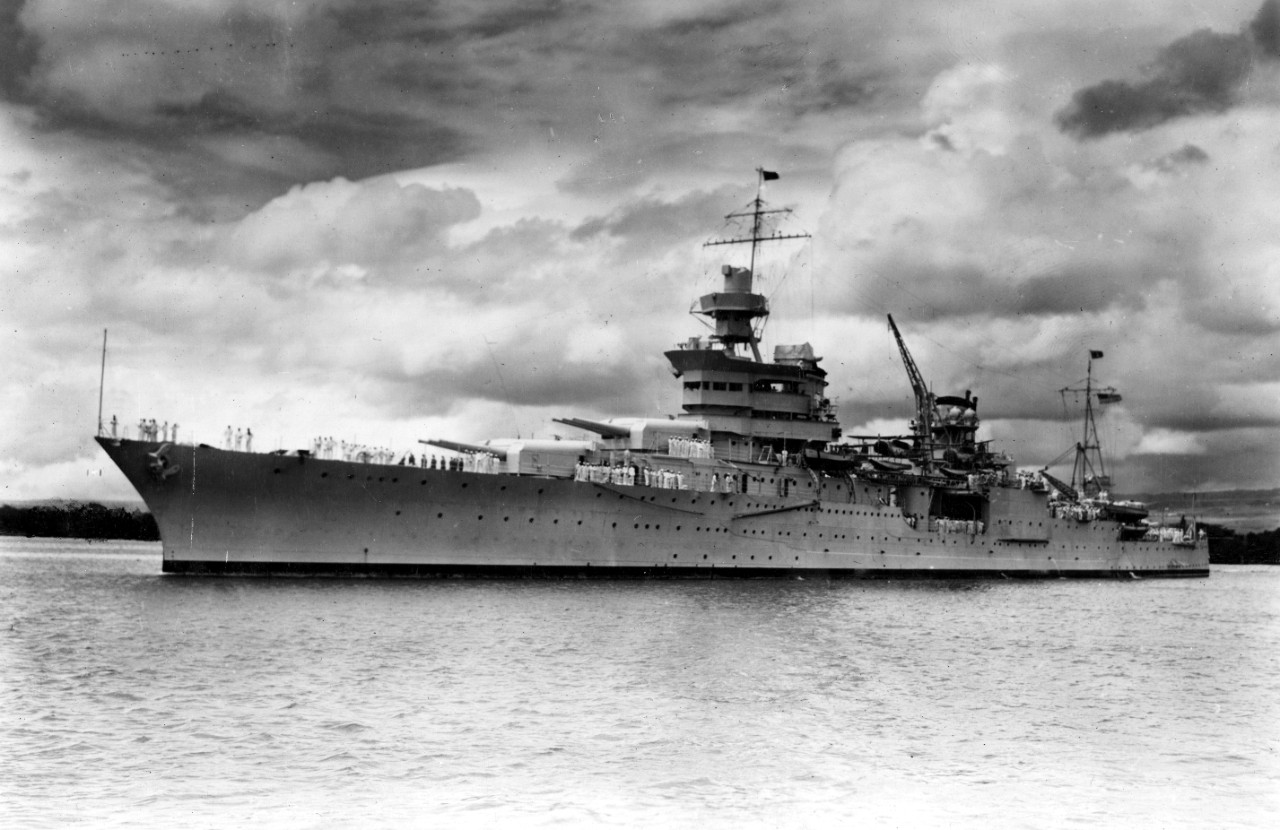 During the luncheon, Cox presented the survivors who were able to attend with certificates of appreciation for their service with color photo copies of their own handwritten statements taken by the board of inquiry in the aftermath of the ship’s loss.

It has been an eventful year in the history of the storied WWII cruiser which, in its final mission before being sunk, delivered to Tinian components of the Hiroshima atomic bomb that would ultimately help end the war in the Pacific.

First, armed with information developed from research conducted by Hulver that changed the Navy’s understanding of where the ship went down, a team of civilian researchers led by entrepreneur and philanthropist Paul G. Allen announced Aug. 19, 2017 they had found the ship’s wreck. In the days that followed, Allen’s team shared with the world stunning images of the remarkably well-preserved wreck that solved one of the enduring mysteries of the war – where was the ship’s final resting place.

“The U.S. Navy retains possession of all ships above and below the surface of the ocean,” said Cox. “This wreck is a property of the U.S. Navy and we have a responsibility for knowing where it is and the condition of the ship. The discovery of the wreck in a location that was about 35 miles from the official sinking position is a significant development and helps us correct a historical record of what happened during that event.”

Then in March, Hulver collaborated with Indianapolis historian and filmmaker Sara Vladic on a paper that settled the number of Sailors and Marines who sailed with the ship when she departed the U.S., the number who lost their lives after she was torpedoed, and the number who survived the ordeal.

“The story of Indianapolis is a 73-year-old event and we’re still learning new things from that event today,” said Hulver. “It’s important to continue research on events from the Navy’s past because it’s the foundation for what the Navy is built on.”

A Portland-class heavy cruiser, Indianapolis served President Roosevelt as ship of state, and Adm. Raymond Spruance as the 5th Fleet flagship in WWII. She fought through several campaigns, earning ten battle stars. The ship’s final top secret final mission was to carry parts of the first atomic bomb used in combat to a U.S. air base on Tinian. Just a few nights later, shortly after midnight on July 30, the ship fell prey to a Japanese submarine.

In the next 12 minutes of fire and chaos, about 330 of the ship’s crew went down with the ship as it quickly sank, while the rest, approximately 880 men, would be left alone in the Pacific in the middle of the night. For the next five days, without food or water, suffering exposure, dehydration, drowning, and shark attacks, the crew battled the elements and clung to life as best they could before they were finally rescued.

In the wake of the ship’s discovery, the long-held belief by some reemerged that a flaw existed in the Navy’s 1945 official, final crew accounting conducted immediately following the ship’s loss. In its accounting, the Navy, the Court of Inquiry, and the ship’s commanding officer Capt. Charles McVay, believed that 316 survived the sinking. Later, other organizations came to believe that number was 317.

Clarence Donnor, a Sailor who had been listed on Indianapolis’ final sailing list as a passenger, had appeared on various other lists over the years. Later, other researchers discovered that Donnor’s Navy career continued until the summer of 1946, according to a muster roll from the Abnaki-class fleet ocean tug USS Chimariko (ATF-154), leading them to believe he had lived through the sinking and was the 317th survivor.

In order to get to the bottom of the issue, Cox ordered a review of the personnel accounting, and assigned Hulver to carry it out. Hulver and his colleagues at NHHC checked and cross-checked the lists that were created by the ships that performed rescue operations, the hospitals that treated the survivors, and the board of inquiry which obtained recollections from the crew. They confirmed that Donnor’s name was on the sailing list, but not on any survivor list or hospital list. It was then that the Sailor's service record was obtained from the National Archives’ National Personnel Records Center.

Donnor’s file indicates that within hours of arriving on Indianapolis, his notice of acceptance into an officer training program arrived with orders to report to Fort Schuyler, N.Y.  Amid the chaos of the ship’s hurried redeployment, Donnor’s arrival onboard was apparently recorded, but his hasty departure overlooked. Thus, when the paper records were reconstructed, he remained on the final crew list resulting in a complement of 1,196 — one man too many. 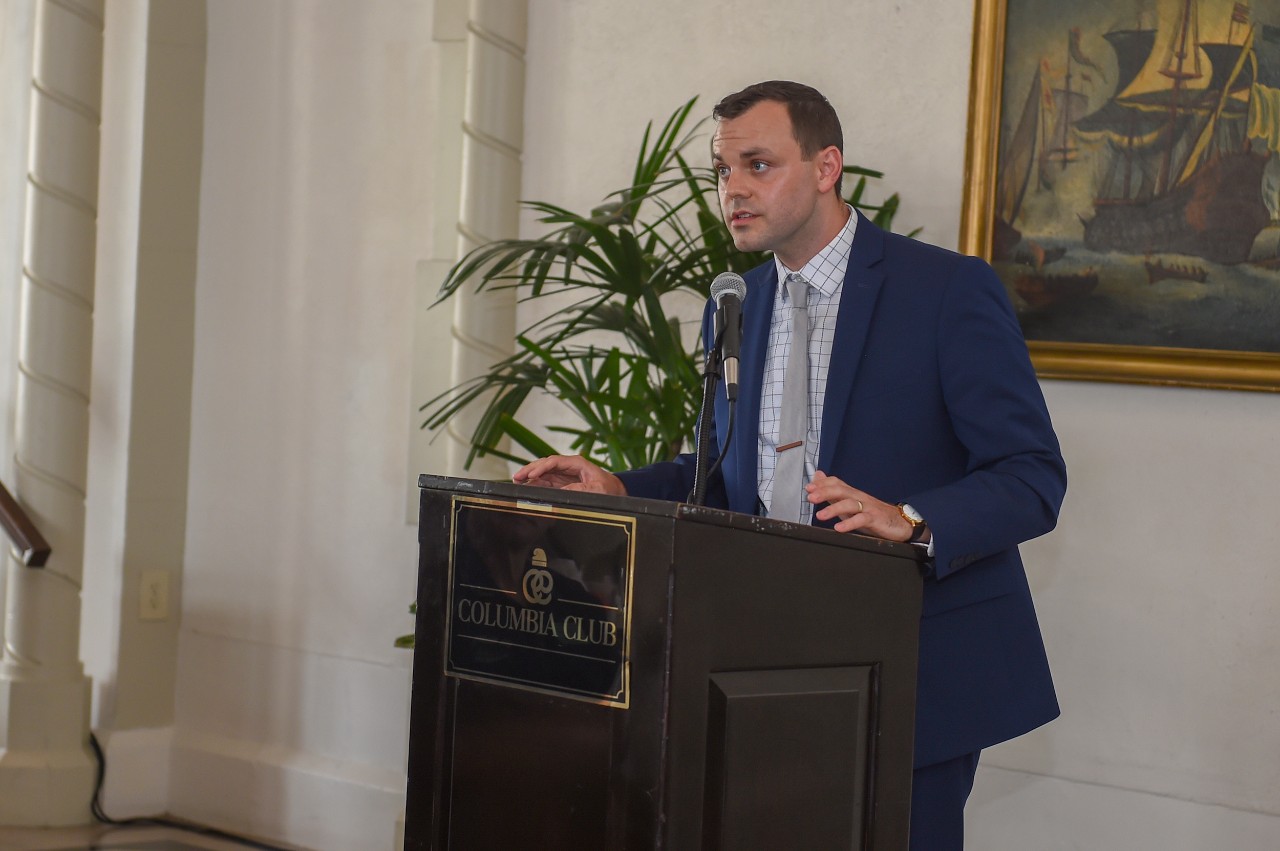 Caption: (July 20, 2018) Richard Hulver, Ph.D. speaks during the 2018 USS Indianapolis reunion at the Columbia Club of Indianapolis, July 20. Hulver collaborated with Indianapolis historian and filmmaker, Sara Vladic on a paper that settled the number of Sailors and Marines who sailed with the ship when it departed the U.S., the number who lost their lives after it was torpedoed and the number who survived the ordeal. (U.S. Navy photo by Mass Communication Specialist 2nd Class Lindsay A. Preston/Released)

“The most rewarding experience from researching Indianapolis was being able to help give closure to the crew,” said Hulver.

As a result of Hulver’s research the final numbers for Indianapolis are:

But the number that matters most now is 14. That’s the number of Indianapolis Sailors still alive today.

“The discovery of the ship was a great day and a day I had been looking forward to for 72 years,” said Harold Bray, an Indianapolis survivor. “Reunions like this are important to me because I can see my old friends and talk with survivors that are still left.”

"Even in the worst defeats and disasters there is valor and sacrifice that deserves to never be forgotten," said Cox. "They can serve as inspiration to current and future Sailors enduring situations of mortal peril. There are also lessons learned, and in the case of the Indianapolis, lessons re-learned, that need to be preserved and passed on, so the same mistakes can be prevented, and lives saved."