Summary of the Tonkin Gulf Crisis of August 1964

A clash between naval forces of the United States and the Democratic Republic of Vietnam (North Vietnam) in August 1964 marked a significant turning point in the Cold War struggle for Southeast Asia. President Lyndon B. Johnson and his Secretary of Defense, Robert S. McNamara, grew concerned in early 1964 that the Republic of Vietnam (South Vietnam), America's ally, was losing its fight against Communist Viet Cong guerrillas. The American leaders decided to put military pressure on Ho Chi Minh's North Vietnamese government in Hanoi, which directed and provided military support for the Communists in the South. Johnson, McNamara, and their advisors believed that naval forces could be used to help compel Ho Chi Minh to cease his support for the Viet Cong. The U.S. Navy armed the Republic of Vietnam Navy with Norwegian-built fast patrol boats (PTF), trained their Vietnamese crews, and maintained the vessels at Danang in northern South Vietnam. In covert operation 34A, which was designed and directed by American officials in Washington and Saigon, the PTFs bombarded radar stations on the coast of North Vietnam and landed South Vietnamese commandoes to destroy bridges and other military targets. Many of the missions, however, failed for lack of good intelligence about the enemy's key military installations, defensive forces, and operating methods.

Consequently, Washington ordered the Navy to focus more attention on the coast of North Vietnam in its longstanding Desoto Patrol operation. The Desoto Patrol employed destroyers in intelligence-gathering missions outside the internationally recognized territorial waters and along the coasts of the Soviet Union, China, North Korea, and North Vietnam. In early August of 1964, destroyer USS Maddox (DD 731), under the operational control of Captain John J. Herrick, USN, steamed along the coast of North Vietnam in the Gulf of Tonkin gathering various types of intelligence. Shortly before, the South Vietnamese PTF force had bombarded targets further to the south of Maddox's patrol area. 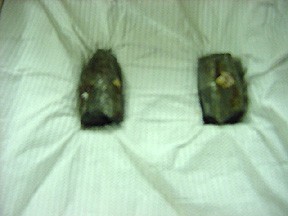 Fragments of the North Vietnamese machine gun bullet recovered from USS Maddox following the 2 August 1964 attack in the Gulf of Tonkin. (From the collection of the Curator Branch, Naval History and Heritage Command)

North Vietnam's leaders, who knew from their own intelligence sources about the American connection to Operation 34A, were determined not to bend to U.S. pressure. Hanoi directed its navy, which had not been able to catch the fast PTFs, to attack the slower American destroyer. On the afternoon of 2 August, the Communists dispatched three Soviet-built P-4 motor torpedo boats against Maddox. Torpedoes launched from the P-4s missed their mark. Only one round from enemy deck guns hit the destroyer; it lodged in the ship's superstructure. The North Vietnamese naval vessels were not so fortunate. Shellfire from Maddox hit the attackers. Then F-8 Crusader jets dispatched from the aircraft carrier USS Ticonderoga (CVA 14) strafed all three P-4s and left one boat dead in the water and on fire. The action over, Maddox steamed toward the mouth of the Gulf of Tonkin and supporting naval forces. The President and his national security advisors were surprised that Ho Chi Minh had not only failed to buckle under U.S. military pressure but had reacted to it in such a bold way. Johnson, Admiral Ulysses S. G. Sharp, the commander of American military forces in the Pacific, and Admiral Thomas H. Moorer, commander of the U.S. Pacific Fleet, decided that the United States could not retreat from this clear Communist challenge. They reinforced Maddox with destroyer USS Turner Joy (DD 951) and directed Captain Herrick to continue his intelligence-gathering mission off North Vietnam with the two naval vessels. On the night of 4 August, the warships reported making contact and then being attacked by several fast craft far out to sea. Officers in the naval chain of command and U.S. leaders in Washington were persuaded by interpretation of special intelligence and reports from the ships that North Vietnamese naval forces had attacked the two destroyers. More recent analysis of that data and additional information gathered on the 4 August episode now makes it clear that North Vietnamese naval forces did not attack Maddox and Turner Joy that night in the summer of 1964.

In response to the actual attack of 2 August and the suspected attack of 4 August, the President ordered Seventh Fleet carrier forces to launch retaliatory strikes against North Vietnam. On 5 August, aircraft from carriers Ticonderoga and USS Constellation (CVA 64) destroyed an oil storage facility at Vinh and damaged or sank about 30 enemy naval vessels in port or along the coast. Of greater significance, on 7 August the U.S. Congress overwhelmingly passed the so-called Tonkin Gulf Resolution, which enabled Johnson to employ military force as he saw fit against the Vietnamese Communists. In the first months of 1965, the President ordered the deployment to South Vietnam of major U.S. ground, air, and naval forces. Thus began a new phase in America's long, costly Vietnam War.