Commemorative Pendant from the Christening of USS Arizona (BB-39) 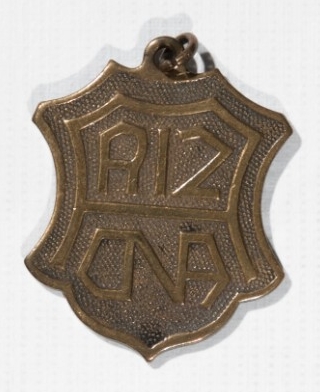 One bronze shield-shaped pendant commemorating the launching of the USS Arizona (BB-39). The obverse is embossed “ARIZ/ONA." The reverse has text, "U.S.S. ARIZONA / LAUNCHED / JUNE 19, 1915.” The pendant has a ring at top center for a string or lanyard.

The pendant is a souvenir from the ship’s launching on 19 June 1915 at the Brooklyn Navy Yard, NY. The badges presented to the official party were the same as this one but were made with metal recovered from the gun carriages of the wrecked USS Maine.

The tradition at a ship's launching is to christen the bow with a bottle of champagne as the ship slips into the water for the first time. At the time of the ship’s christening, Arizona was a dry state, having passed a prohibition law in 1914. The day of the christening, there was much speculation about whether alcohol or water was to be used. The Navy left the decision up to the state’s governor who chose to christen the ship with two bottles- one containing the traditional champagne, the other containing water from the Roosevelt Dam. 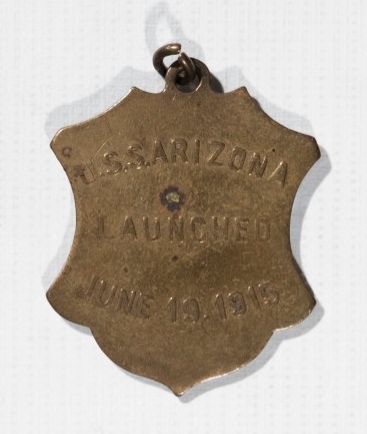