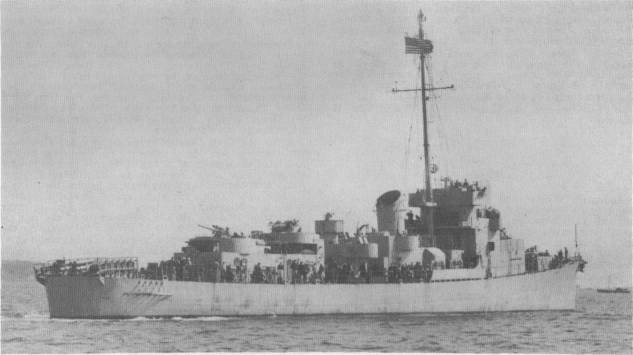 Caption: Evarts-class destroyer escorts such as Wyffels (DE-6), seen here on 26 April 1943, were built to a British Admiralty specification and called "short-hull" escorts, in contrast to their larger American-designed contemporaries of other classes.

Lawrence Edward Wyffels, born on 20 January 1915 in Marshall, Minn., enlisted in the United States Navy on 17 March 1936. He served in Enterprise (CV-6); and was advanced to carpenter on 25 June 1942. He was killed in enemy action on 26 October 1942 when Enterprise suffered bomb damage during the Battle of Santa Cruz Island. Disregarding his own safety, Carpenter Wyffels courageously fought the blaze ignited by bombs and repeatedly entered burning compartments to rescue the wounded trapped inside. Carpenter Wyffels was posthumously awarded the Silver Star for his intrepid devotion to duty.

Following sea trials in April, the destroyer escort got underway from Boston on 8 May 1943 and for the remainder of the month conducted exercises out of Bermuda. In June, she alternated operations out of Norfolk with drydock periods. On 27 June 1943, she departed from Hampton Roads on the first of 11 wartime voyages escorting convoys across the treacherous Atlantic to Mediterranean ports. Her first voyage proved uneventful, although the return from Casablanca was enlivened by the investigation of sound contacts. On 29 July, the destroyer escort left her station to guard a tanker, SS British Pride, which had fallen behind due to engine failure. Long, anxious hours ensued as Wyffels circled the disabled ship while repairs were being made; she then escorted the straggler back to her convoy.

Between August 1943 and April 1945, Wyffels, with occasional interruptions for exercises off the New England coast, conducted 10 more successful circuit voyages escorting convoys to and from North Africa. On her Atlantic crossings, the ship acted as a versatile and valuable part of the Atlantic convoy system, marshalling reluctant merchantmen, protecting stragglers, and searching for the source of each sound contact which might, at any time, turn out to be apredatory German submarine. In winter, stormy weather and heavy seas slowed the awkward merchant ships and increased the number of stragglers, complicating the task of the escort vessels.

On 11 May 1944, Wyffels was escorting UGS-40, a convoy of 56 merchant ships bound for Bizerte, when she experienced her most perilous moments. Shortly after sunset, a task force order to go to general quarters jolted Wyffels from the normal routine of convoy duty. Ships of the escort began laying smoke, and soon Wyffels' radar picked up a group of approaching planes. After a tense, six-minute wait, the ominous calm of the Mediterranean night was broken as firstBenson (DD-421) and then Evarta (DE-5) opened fire.

Moments later, seamen in Wyffels spotted the first wave of attacking planes as they came into view low over the water, some four miles away. Three of the aircraft veered off to make a run on the convoy at an altitude of about 200 feet.Wyffels opened fire as the planes passed down her port side and sped off toward the convoy's port quarter. Moments passed as the destroyer escort patrolled at full speed, her guns silent. An aerial attacker appeared out of the smoke,dropped an ill-aimed torpedo, and disappeared. Then, at 2124, Wyffels engaged a clearly visible Junkers bomber which approached the ship's starboard bow at an altitude of 100 feet. Amidst a telling crossfire from Wyffels and other members of the escort, the plane banked to the right, missing the forward part of the ship. Smoke poured from the attacker as it rapidly lost altitude and disappeared in a burst of black smoke.

Soon after, Wyffels took under fire another plane which emerged from the convoy's barrage and passed directly over the ship's forecastle and along her starboard side. The aircraft then continued on its way, apparently without having suffered serious damage. Other ships continued to fire for 10 minutes, but the raiders had departed without scoring a single hit on the convoy or its escort.

Through the final year of the war in Europe, Wyffels continued her protection of Atlantic convoys. On 13 April 1945, as Wyffels was en route home from what was to be her last wartime Atlantic convoy, the destroyer escort received word that President Franklin D. Roosevelt had died, and she lowered her colors to half mast. After repairs at Charleston later that month, she arrived at Miami on 11 May. In the following months, she operated off Florida and in the Bahamas,serving as a school ship training student crews in basic gunnery and antisubmarine warfare.