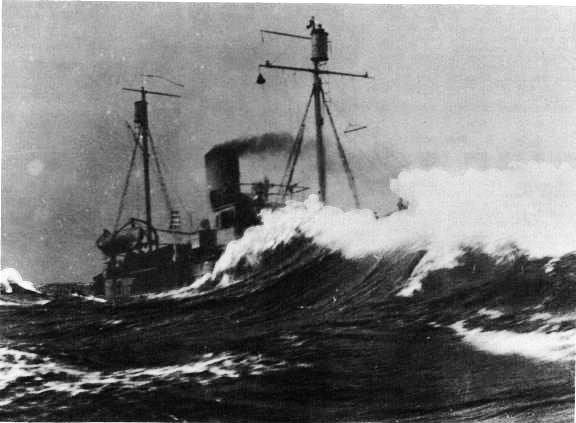 The armed yacht was fitted out for distant service and departed Newport, R.I., on 4 November 1917 in company with tender Hannibal and yachts Helenita (S. P. 210), Margaret (S. P. 527), May (S. P. 164), Rambler (S. P. 211), and Utowana (S. P. 951). Each yacht towed a French-manned, American-made submarine chaser. In spite of a breakdown apiece for Helenita, Margaret, May, and Utowana, the flotilla of yachts and submarine chasers reached their first port of call, Hamilton, Bermuda, on 9 November. Wenonah remained at Hamilton for nine days and then departed in tow of May along with Hannibal, Margaret, Rambler, Artemis (S. P. 593), Cythera (S. P. 575), Lydonia (S. P. 700), and the six submarine chasers on the 18th for the next leg of the voyage, from Bermuda to the Azores. She reached the Azores on 5 December and, after two days at Horta, moved on to Ponta Delgada where she remained from 8 to 19 December. From there, the yacht continued on across the eastern Atlantic and arrived at Gibraltar on Christmas Day. On 15 January 1918, she began escorting convoys between Gibraltar and Bizerte, Tunisia. That duty continued uninterrupted through the end of hostilities in November 1918.

Wenonah's logs reveal only a single variation to that routine, a run to Genoa and back in July 1918. During the Gibraltar-to-Genoa leg of that voyage, the armed yacht engaged in her only combat action of the war. At about 1924 on the evening of the 23d, one of the ships she was escorting, SS Messidor, was torpedoed. Wenonah dropped a single depth charge in the vicinity of the sinking ship then busied herself with rescue operations. She dropped rafts and buoys for the survivors of SS Messidor and returned to her station with the convoy.

Several hours later, just before 0100 on the 24th as she zigzagged on patrol astern of the convoy, Wenonah spied a flare ahead and learned that another unit of the convoy, SS Rutherglen, had also run afoul of an enemy torpedo and was settling slowly by the stern. She dropped a single depth charge near the sinking ship, but it failed to detonate. After her inauspicious antisubmarine maneuver, the yacht turned to rescue work and, by 0123, had taken 38 survivors on board.

After a lull during the daylight hours of the 24th, action resumed that evening. Just before 2100, she made another unsuccessful attack on a suspected submarine contact. Again, her British depth charge failed to function. Near chaos followed on the heels of that attack. Almost immediately every ship in the convoy began to steer various courses to avoid the unseen "enemy." For almost an hour, they cruised the area in a highly disorganized manner, firing guns and dropping depth charges at almost anything that suggested the presence of a U-boat.

Finally, at 2150, the convoy reformed and moved off in some semblance of order. Two alarms occurred that night; and, during the second, Wenonah fired a single 3-inch shell at what proved to be a porpoise. Save for another porpoise masquerading as a U-boat the following day, the excitement abated, and the convoy completed the voyage in a more routine fashion.

A week after the armistice, Wenonah made a trip from Gibraltar to Lisbon, Portugal, and back. Then, on 7 December, she departed Gibraltar to return to the United States. Steaming in company with Druid (SP-321), Wheeling (Gunboat No. 14), and the Coast Guard cutter Yamacraw, she stopped first at Ponta Delgada. Then, on her way from the Azores to Bermuda, she lost her navigation officer overboard during a battle with a force 10 gale early on the morning of 23 December 1918. On 3 January 1919, the yacht entered port at New London, Conn. On 14 March, she moved to the New York Navy Yard, where she was placed out of commission on 12 April and transferred to the United States Coast and Geodetic Survey. The yacht served with that agency on the west coast until October 1922 when the Department of Commerce returned her to the Navy in the custody of the Commandant, 13th Naval District. Wenonah was reinstated on the Navy list and received the hull designation PY-11 on 22 September 1923. However, the yacht remained inactive; and her name was again struck from the Navy list on 20 January 1928. The yacht was sold to H. W. Goodall of Santa Barbara, Calif., on 15 May 1929.