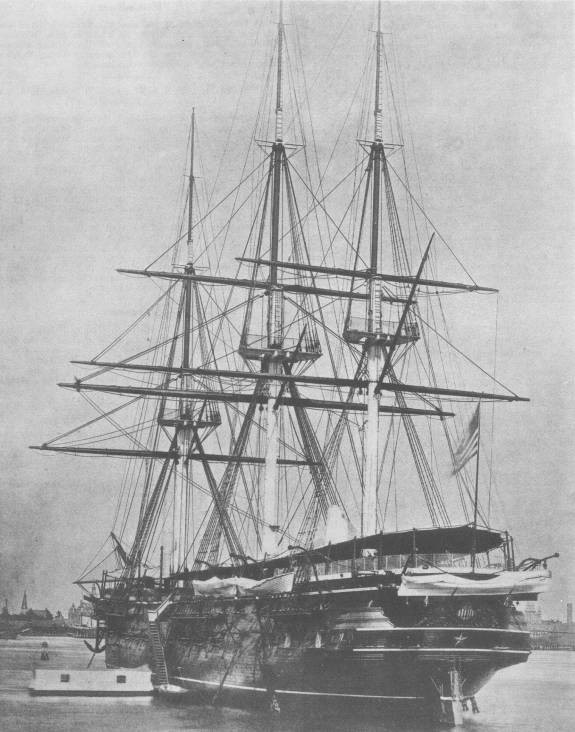 Caption: USS Wabash as a receiving ship; she is still fully rigged although her sails have been removed. Steam engines and heavy shell guns made the big steam frigates of the 1850s perhaps the most powerful seagoing warships afloat for the few years before the introduction of armor. (NR&L(0) 7680)

A river that rises in Drake County, Ohio, near Fort Recovery and meanders westward across Indiana until it reaches Illinois at a point just southwest of Terre Haute. South of that point, it outlines the border between the two states until emptying into the Ohio a few miles west of Uniontown, Ky. Wabash is an abbreviation of the Miami Indian name for the stream, Wabashiki, which means "bright white" or "gleaming white." It refers to the limestone bed of the stream along its upper course.

The first Wabash was laid down on 16 May 1854 bythe Philadelphia Navy Yard; launched on 24 October 1855; sponsored by Miss Pennsylvania Grice; and commissioned there on 18 August 1856, Capt. Frederick K. Engle in command.

Wabash departed Philadelphia on 7 September 1856, stopping at Portsmouth, N.H., to embark President Franklin Pierce for passage to Annapolis, Md. She arrived at New York on 23 October 1856, sailing on 28 November 1856 to become flagship of Commodore Hiram Paulding's Home Squadron. The squadron was instrumental in foiling the expedition against Nicaragua underway by American fllibusterer, William Walker, who had dreamed of uniting the nations of Central America into a vast military empire led by himself. Through insurrection, he became president of Nicaragua in 1855 only to have Cornelius Vanderbilt, who controlled the country's shipping lifelines, shut off supplies and aid. A revolt toppled Walker from power, and he was trying for a military comeback before he was captured in 1857 by the Home Squadron. Stateside controversy over the questionable legality of seizing American nationals in foreign, neutral lands prompted President James Buchanan to relieve Commodore Paulding of his command. Wabash was decommissioned on 1 March 1858 at the New York Navy Yard.

Wabash was recommissioned on 25 May 1858, Capt. Samuel Barren in command, and became the flagship of Commodore E. A. F. La Vallette's Mediterranean Squadron. The future naval hero of the Spanish-American War, George Dewey, then a midshipman, served in Wabash when she touched at her first port of call, Gibraltar, on 17 August 1858. Wabash returned to the New York Navy Yard on 16 December 1859 and decommissioned there on 20 December 1859.

With the outbreak of the Civil War, Wabash was recommissioned on 16 May 1861, Capt. Samuel Mercer in command, and departed New York on 30 May 1861 as flagship of the Atlantic Blockading Squadron under Rear Admiral Silas H. Stringham.

On 26 August 1861, Wabash departed Hampton Roads, bound for Hatteras Inlet, N.C., to take part in the first combined amphibious assault of the war. Wabash accompanied Monticello, Pawnee, revenue cutter Harriet Lane, the tug Fanny, and two transports, carrying over 900 troops under Major General Butler. Union forces secured Hatteras Inlet with the capture of Forts Hatteras and Clark on 29 August 1861. The attack force suffered no casualties and took over 700 prisoners. Among these was Capt. Samuel Barren, CSN, the former commander in the United States Navy of Wabash when she served under Rear Admiral La Vallette. Wabash was later designated the flagship of Flag Officer Samuel F. Du Pont, the new commander of the South Atlantic Blockading Squadron, and was sent to the New York Navy Yard for repairs on 21 September 1861.

After refit, Wabash departed Fort Monroe on 29 October 1861 to spearhead the Federal assault on Port Royal, S.C. The assembled invasion fleet was the largest yet organized by the Navy, containing 77 vessels and 16,000 Army troops under Brigadier General Thomas W. Sherman. The combined force secured Port Royal Sound on 7 November 1861 after a furious four-hour battle. Wabash led the battle line in this major strategic Union victory.

Wabash now took up permanent station on the Charleston blockade, operating out of Port Royal. On 11 March 1862, a landing party led by ship's commanding officer, Comdr. C. R. P. Rodgers, occupied St. Augustine, Fla. A detachment of seamen and officers from Wabash landed and manned a battery which bombarded Fort Pulaski, Ga., on 10 and 11 April 1862 and was instrumental in forcing that Southern fort to surrender. A naval battery of three 12-pounder boat howitzers from Wabash supported Union troops at the Battle of Pocotaligo, S.C., on 22 October 1862.

Confederate vessels twice harassed Wabash while on duty in Port Royal Sound. On 5 August 1863, CSS Juno, a small steamer on picket duty below Fort Sumter, fired upon and ran down a launch from Wabash, capturing 10 sailors and drowning two. A "David" submarine torpedo boat also attacked Wabash on 18 April 1864. Ensign Charles H. Craven, officer of the deck, spotted the cigar-shaped vessel in time for Wabash to get underway. The "David" disengaged from the attack in the face of musket fire and round shot discharged from Wabash.

Wabash departed her station on 1 October, bound for the Norfolk Navy Yard and an overhaul. En route, she grounded briefly on Frying Pan Shoals, suffering minor damage to her rudder. Repairs and overhaul were completed by 16 December, in time for Wabash to join the North Atlantic Blockading Squadron and to participate in the first attack on Fort Fisher, N.C., on 24 and 25 December 1864. The failure of this initial attempt to take the fort necessitated a second, successful combined operation between 13 and 15 January 1865.

Wabash returned to Hampton Roads on 17 January 1865, receiving orders on 25 January 1865 to proceed to the Boston Navy Yard. Wabash was decommissioned at Boston on 14 February 1865. She was placed in ordinary from 1866 to 1869; overhauled during 1870 to 1871; and recommissioned on 24 October 1871, Capt. Robert W. Shufeldt commanding. Wabash departed the Boston Navy Yard on 17 November 1871 and served as the flagship of Rear Admiral James Alden, commanding the Mediterranean Squadron. She arrived at Cadiz, Spain, on 14 December 1871 and cruised throughout the Mediterranean until 30 November 1873 when she departed Gibraltar, bound for Key West, Fla. Wabash arrived in Key West on 3 January 1874. She was decommissioned on 25 April 1874 at the Boston Navy Yard. In 1875, she was placed in ordinary and served as a housed-over receiving ship from 1876 to 1912. Wabash was struck from the Navy list on 15 November 1912 and sold that same day to the Boston Iron and Metal Co., Boston, Mass