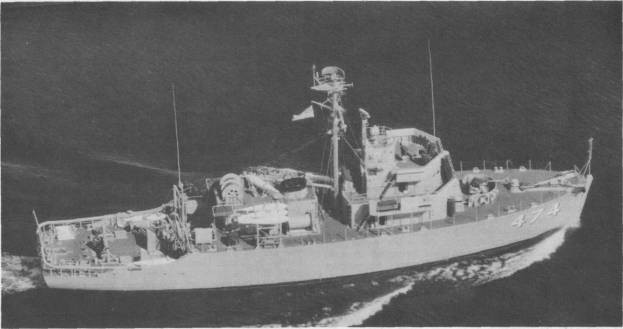 Caption: USS Vital (MSO-474), 1955. The white objects on her after decks are floats which support various types of mine-sweeping gear. A large winch at the forward end of Vital's fantail controls sweep wires; the conspicuous reel forward of this holds magnetic minesweeping cables (80-G-668767)

Turned over to the Royal Navy under provisions of the lend-lease agreement, Vital was renamed HMS Strenuous (J.338) and subsequently served in the British Navy for the duration of World War II. Returned to the United States Government after the war, on 10 December 1946, the ship resumed her former classification, AM-129, but not her former name. She was carried on the Naval Vessel Register as Strenuous (AM-129), and in the 1 January 1947 edition of the Naval Vessel Register as merely AM-129. She was declared surplus on 23 April 1947 and sold by the State Department's Foreign Liquidation Commission to a foreign purchaser. She served in the merchant service until she was broken up for scrap in Germany in July 1956.

Following shakedown and an availability at Charleston, S.C., Vital was deployed to the Mediterranean late in the spring of 1956. In addition to normal 6th Fleet operations and Mediterranean port visits, she participated in a special NATO minesweeping exercise conducted in the North Sea during September and October. The minesweeper returned to Charleston later that fall and began operations along the southern Atlantic seaboard of the United States. In March 1957, she moved to the Gulf of Mexico for a three-month training period at the conclusion of which she returned to Charleston and resumed normal duty.

In July 1958, Vital's home port was changed from Charleston to Panama City, Fla. From the latter port, she participated in experimental work with the Operational Test and Evaluation Force under the auspices of the Naval Mine Defense Laboratory. She remained based at that port for the next 12 and one-half years, departing periodically for deployments in foreign waters. The first break in her experimental work schedule came in August 1960 when she embarked upon a three-month cruise in the Caribbean. After returning to Panama City in November and resuming duty with the Mine Defense Laboratory, she remained so occupied until February of 1962, at which time the minesweeper headed across the Atlantic with the other units of Mine Division (MinDiv) 81 for a six-month tour of duty with the 6th Fleet in the Mediterranean. She arrived back in Panama City in August and resumed services to the Mine Defense Laboratory. Following 14 months of normal operations in the Gulf of Mexico, Vital headed south for a four-month assignment in the West Indies which she concluded at Panama City on 9 February 1964.

Upon the conclusion of that Caribbean deployment, Vital settled down to a routine of operations out of Panama City broken only by three Mediterranean deployments and an ascent of the Mississippi River in May of 1967 to participate in the Cotton Carnival at Memphis, Tenn. On 1 January 1971, Vital received word that her home port had changed back to Charleston. She arrived there on the 27th and, for the next 20 months, operated from that base as a unit of the Atlantic Fleet Mine Force. On 22 September 1972, Vital was decommissioned at Charleston. She was towed to Hampton Roads late in November and, on the 30th, placed in the Norfolk Group of the Atlantic Reserve Fleet. She remained there until struck from the Navy list in September 1977. At that time, she was scheduled to be sold; but no word of her final disposition was available as of May 1978.