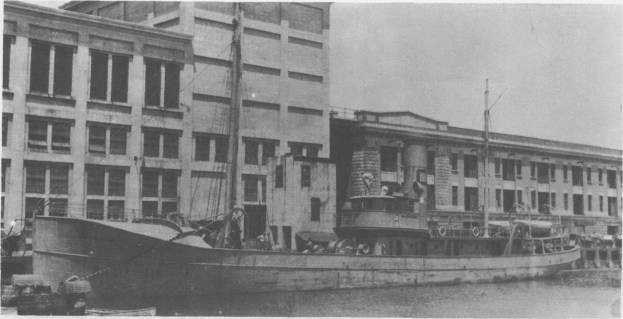 Caption: The trawler Utowana, shortly before her acquisition by the Navy; the "C" on her funnel refers to her owner the Commonwealth Fisheries Company of Boston.

Utowana, a yacht built in 1891 at Philadelphia, Pa., by Neafle & Levy and rebuilt as a trawler at Staten Island, N.Y., in 1917 for the Commonwealth Fisheries Co., Boston, Mass., was acquired by the Navy during the summer of 1917 for service as a minesweeper in the First Naval District and, given the identification number S.P. 951, was placed in commission on 30 October 1917, Lt. Cmdr. Reuben K. Dyer, NNV, in command.

Though some records indicate that the ship was later renamed Victorine, they give no date for the renaming. Moreover, the trawler was consistently referred to thereafter as Utowana both in official and unofficial publications. In any event, the trawler was assigned to Division 13, Squadron 5, Patrol Force. That organization, made up various types of ships and craft, was responsible for patrol and escort duties overseas. In addition to the European bases such as Brest in France and Queenstown in Ireland, ships of the Patrol Force operated in such diverse areas as the Caribbean and the Azores.

While no records have been found indicating where Utowana served before arriving on the French coast early in 1918, she operated briefly at Bermuda and perhaps for a short period at Ponta Delgada in the Azores. It is known that she departed Newport, R.I., on 4 November 1917 in company with Hannibal, Helenita (S.P. 210), Margaret (S.P. 527), May (S.P. 164), Rambler (S.P. 211), and Wenonah (S.P. 165). Each yacht towed a submarine chaser. After five days at sea and in spite of a breakdown apiece for Margaret, May, Helenita and Utowana, the little task group arrived in Hamilton, Bermuda. Apparently, Helenita and Utowana remained behind in Bermuda when the other four yachts--augmented by Cythera (S.P. 575), Artemis (S.P. 593), and Lydonia (S.P. 700) departed Hamilton on 18 November bound for Ponta Delgada. Presumably, Utowana, like Helenita, stayed in Bermuda to conduct patrols in surrounding waters, though it is also possible that she remained behind for repairs. Records giving details simply do not exist.

In any event, the former yacht reached the French coast in February 1918. Thereafter, in all probability, she provided escort services to coastal convoys and conducted antisubmarine patrols of French coastal waters. About the time of the armistice, the armed trawler began to assist Favorite (S.P. 1385) in salvage and repair work. Following the armistice, she probably continued her salvage work. Utowana returned to the United States in August 1919 and was assigned to the Third Naval District. She was placed out of commission on 11 September 1919. Just over a year later, on 13 September 1920, she was sold to the Denton Shore Lumber Co., Tampa, Florida.