The Navy retained the alphanumeric name carried by this former Imperial German Navy vessel at the time of her acquisition.

UC-97, a minelaying submarine, was launched at Hamburg, Germany, by Blohm & Voss on 17 March 1918; and commissioned in the Imperial German Navy on 3 September 1918. Three days later [6 September 1918], Oberleutnant zur See Walter Wiedemann (who had been credited with sinking eight ships while in command of UC-73 in the Mediterranean) assumed command of the new unterseeboote, which he retained until the Armistice stilled the guns of the Great War on 11 November 1918. Consequently, she was surrendered according to the terms of the Armistice and interned at Harwich, England.

The U.S. Navy expressed an interest in acquiring several of the surrendered German submarines for display purposes in conjunction with a Victory Bond drive; consequently, UC-97 and five other U-boats were allotted to the United States. Officers and sailors went to England in March and took possession of the boats. UC-97 was placed in special commission on 15 March 1919 for the voyage to the United States, Lt. Cmdr. Holbrook Gibson in command.

Although the U.S. crew worked feverishly to prepare the submarine for the voyage across the Atlantic, faulty machinery kept UC-97’s men from completing their mission until she was well out to sea. Thus, when she set sail with UB-88, U-117, and UB-148 on 3 April, Bushnell (Submarine Tender No. 2) had to tow her. By late afternoon of her first day at sea, however, the U-boat’s American crew succeeded in getting her diesel engines running and, for the remainder of the voyage, she moved under her own power.

Her unit, which had received the interesting name, Ex-German Submarine Expeditionary Force, steamed first to Ponta Delgada in the Azores and then to Bermuda, whence the four U-boats and Bushnell set course for New York City, N.Y., where they arrived on 27 April 1919 after a rough voyage. At New York, the boats became the objects of interest to a horde of reporters, photographers, and tourists, who joined Navy Department technicians and civilian submarine builders in swarming over and through UC-97 and the other boats. 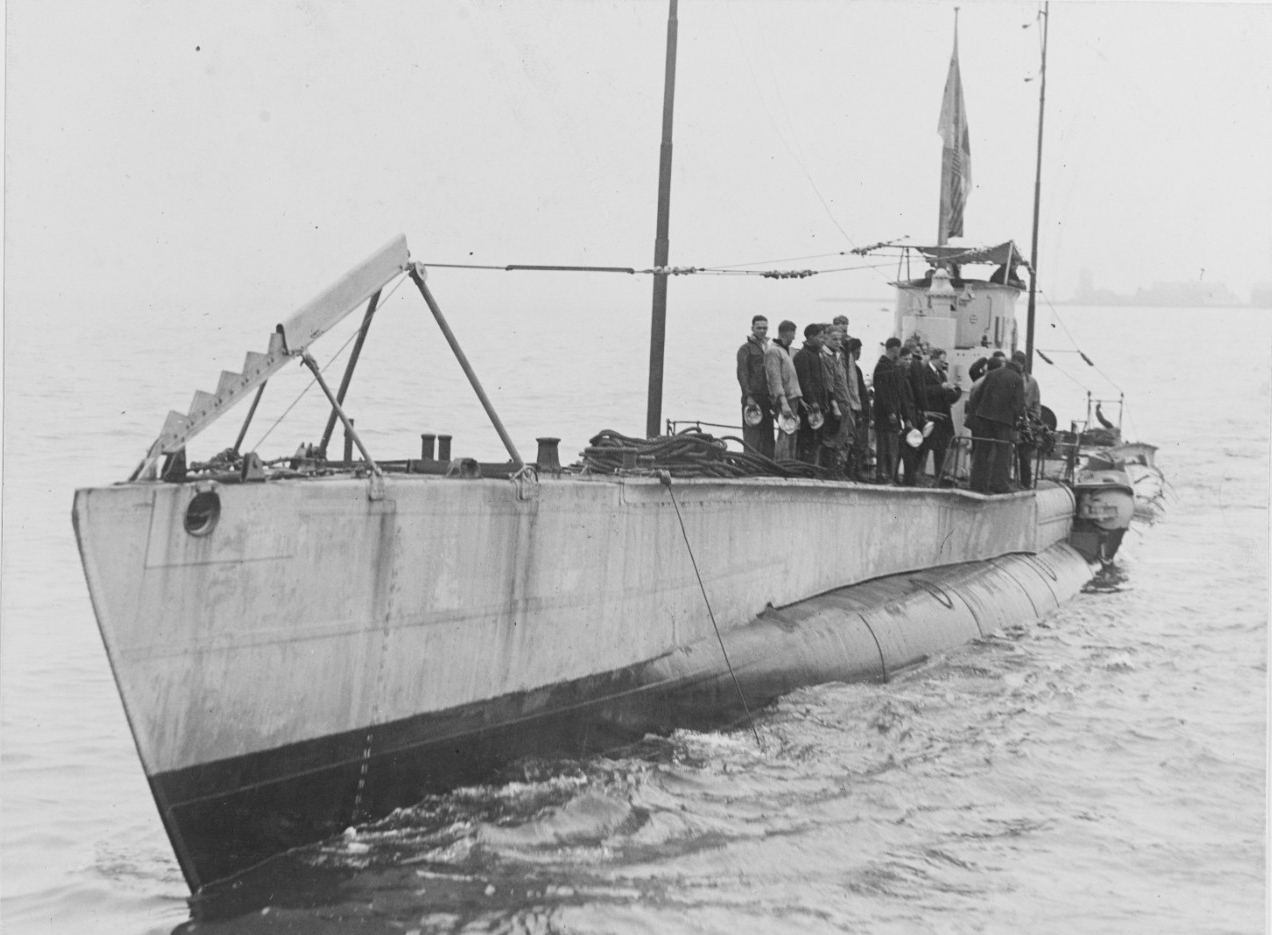 Caption: Sailors on board UC-97 participate in memorial services, laying a wreath in the Ambrose Channel, outside of New York Harbor, on 8 May 1919, to mark the anniversary of the sinking of the British steamship Lusitania and honor the memory of those lost at sea during the Great War. (Naval History and Heritage Command Photograph NH 111107)

Soon, however, the U-boat received her itinerary for the Victory Bond campaign. Of the six regions into which the coastal areas and major waterways of the United States were divided, UC-97 drew the Great Lakes, an assignment that required her to negotiate the locks of the Canadian-controlled St. Lawrence canal system. UC-97’s refusal to break with traditional practice on board a man-of-war and fly the Union Jack at the fore caused trouble at each Canadian port of call along the way. Lt. Cmdr. Charles A. Lockwood, Jr., her commanding officer at that juncture, who later rose to fame in World War II as Commander Submarines, Pacific Fleet, however, stuck to his guns and was later vindicated by Canadian naval officers who applauded his pertinacious observance of time-honored naval tradition.

Once she cleared the last locks and entered the Great Lakes, UC-97 began a whirlwind series of visits to U.S. ports, large and small, along the littoral of Lakes Ontario, Erie, Huron, and Michigan. Although scheduled to visit Lake Superior ports as well, the U-boat had to cut short her voyage because of wear on the engines. Thus, in August 1919 she started back down the coast of Lake Michigan toward Chicago, Illinois, where she arrived at the beginning of the last week of the month.

At Chicago, her crew turned UC-97 over to the Commandant Ninth Naval District. She lay at the Great Lakes [Illinois] Naval Station until 7 June 1921 when she was taken out into Lake Michigan and sunk as a target by the gunboat Wilmette during U.S. Naval Reserve gunnery drills.