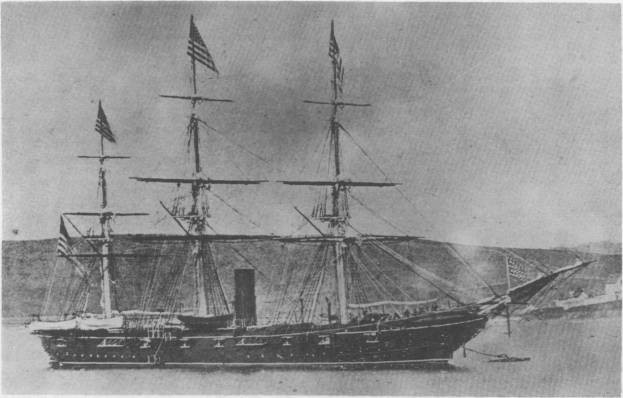 Caption: The wooden steamer Tuscarora after the Civil War with ensigns at her mastheads to celebrate a holiday. (NR&L(O) 2806)

A mountain range in south-central Pennsylvania. The name is Iroquois Indian and means "hemp gatherers."

On the day of her commissioning, Tuscarora got underway from Orange for her shakedown cruise which she completed at Charleston, S.C., on 21 December. On 8 January 1942, the tug cleared Charleston and headed north to her first duty station, Norfolk, Va. She arrived in Hampton Roads on the 14th and began duty as a harbor tug. For the duration of World War II, Tuscarora served as a harbor tug at Norfolk. Her duties varied from guarding submarine nets to towing targets and ammunition barges as well as assisting ships into and out of port. During her stay at Norfolk, the tug changed designations twice. On 5 November 1942, she was officially designated a harbor tug and her hull number was changed to YT-341. Later, on 15 May 1944, when many older tugs received new designations, Tuscarora became a large harbor tug, YTB-341.

After World War II, she left Hampton Roads on 9 October, rounded Cape Henry, and shaped a course south. Following a brief stop at Fort Lauderdale, Fla., she arrived in Key West and reported for duty at the Antisubmarine Development Detachment Section Base located there. For almost two years, the tug operated in the Gulf of Mexico and the West Indies supporting the forces engaged in developmental work for antisubmarine warfare equipment, tactics, and doctrine.

On 1 July 1947, Tuscarora was reassigned to the 7th Naval District but remained stationed at Key West until November of 1953 when she was decommissioned and placed in reserve with the Green Cove Springs (Fla.) group of the Atlantic Reserve Fleet. Tuscarora remained with the reserve fleet for eight years. In November of 1958, the tug changed classifications for the third time when she was redesignated an auxiliary ocean tug, ATA-245. On 1 September 1961, her name was struck from the Navy list, and she was transferred to the Maritime Administration for lay-up with the National Defense Reserve Fleet at James River, Va. She remained there until sometime between 30 June 1970 and 30 June 1971, during which period she disappeared from the inventory of the Maritime Administration.