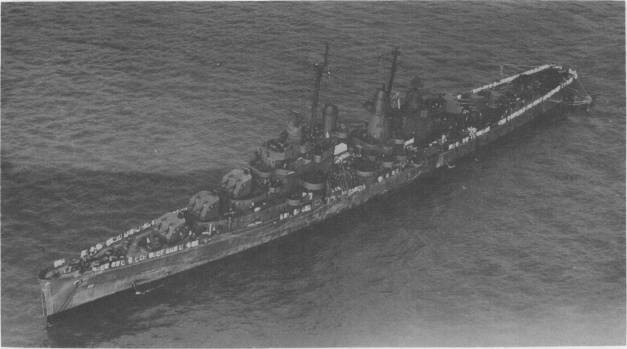 Caption: The antiaircraft cruiser Tucson (CL-98) in weathered dark camouflage finish during the latter part of the Pacific war. Ships of this class were considerably smaller than other light cruisers of their time.

A city in, and the seat of, Pima County, Ariz.

Following outfitting at San Francisco and shakedown out of San Diego, Tucson sailed for the western Pacific on 8 May. She stopped at Pearl Harbor on 13 May for three weeks of additional training before resuming her voyage west on 2 June. She stopped overnight at Ulithi on 13 and 14 June, then continued on to the Philippines, and reached Leyte on the 16th. The cruiser was assigned to the screen of the Fast Carrier Task Force, TF 38, specifically to that of Rear Admiral Gerald F. Bogan's Task Group (TG) 38.3 built around carriers Essex (CV-9), Ticonderoga (CV-14), Randolph (CV-15), Monterey (CV-26), and Bataan (CVL-29).

Tucson joined the fast carriers just in time to participate in their final rampage against the Japanese Empire and its inner defenses. On 1 July, she sortied from Leyte Gulf with TF 38 and headed north to the Japanese home islands. On the 10th, the flattops launched planes against Tokyo. On the 14th and 15th, TF 38's air groups struck Hokkaido and northern Honshu. They returned to southern Honshu on the 17th and 18th to blast Tokyo again and then left the area for almost a week. On 24 and 28 July, she appeared with the carriers south of Shikoku while their planes hit shipping in the Inland Sea. On the 30th, they zeroed in on Kobe and Nagoya. After that, they retired south to fuel and replenish before striking out northward. By the second week of August, Tucson was off northern Honshu screening the carriers while their planes pounded the island once more. She then accompanied them south to pummel Tokyo again on the 13th. Two days later, Japan capitulated.

Though hostilities had ceased in mid-August and the Japanese had surrendered formally on 2 September, Tucson remained in the Far East, steaming with TF 38 to the east of Honshu, covering the occupation forces moving into Japan. On 20 September, she cleared area and, two days later, stopped at Okinawa before shaping a course back to the United States. En route, she called at Pearl Harbor and then arrived in San Francisco on 5 October. On the 23d, the warship headed down the coast to San Pedro, where she participated in the Navy Day celebration on the 27th and 28th. On the 29th, she shifted to San Diego where she reported for duty with Pacific Fleet Training Command as an antiaircraft gunnery training ship. Between November 1945 and August 1946, the antiaircraft cruiser trained about 5,000 officers and men in the use of 5-inch and 40- and 20-millimeter antiaircraft guns. She interrupted her training duties periodically to represent the Navy at special events held in various ports on the Pacific coast.

On 6 September, she entered the Puget Sound Naval Shipyard for a three-month overhaul to get ready for duty under the Commander, Destroyers, Pacific Fleet. For the next two months, Tucson trained out of San Diego in preparation for a fleet exercise to be conducted near Hawaii. On 24 February 1947, the cruiser stood out of San Diego and cruised Hawaiian waters as an element of the force charged with the defense of the islands against an aggressor force moving in from the western Pacific. At the completion of the exercise, the warship put into Pearl Harbor on 11 March. However, she got underway again on the 18th to participate in the fruitless search to the northwest of Hawaii for survivors of the wrecked SS Fort Dearborn.

On 27 March, Tucson returned to San Diego and resumed normal west coast operations until late summer. She again departed the west coast on 28 July and proceeded, via Pearl Harbor, to the Far East, arriving at Yokosuka, Japan, on the 15th. For the next two months, the warship cruised the waters of the Yellow Sea and the East China Sea making observations during the Communist-Nationalist struggle for supremacy in Manchuria and northern China. During that period, she visited Shanghai twice and Tsingtao once. Tucson returned to Yokosuka on 19 October, stayed overnight, and sailed the next day for the United States, arriving at San Diego on 6 November. The cruiser resumed west coast operations and, for the brief remainder of her active career, remained so engaged.

On 9 February 1949, Tucson reported to Mare Island Naval Shipyard to begin preparations for inactivation. On 11 June 1949, she was decommissioned and berthed with the San Francisco Group of the Pacific Reserve Fleet. She remained in reserve at Mare Island until 1 June 1966 when her name was struck from the Navy list. The former warship served as a test hulk until 1970. On 24 February 1971, the hulk was sold to the National Metal & Steel Corp., of Terminal Island, Calif., for scrapping.