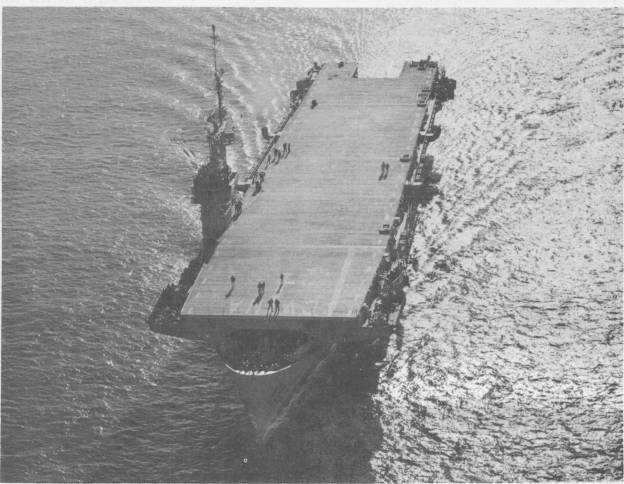 An inlet at the south end of Tebenkof Bay on the west coast of Kuiu Island in the Alexander Archipelago of Alaska.

Thetis Bay got underway for San Diego where she conducted brief shakedown training. On 2 June, she moved to San Pedro to load planes and passengers for Pacific bases. The new escort carrier stood out to sea on 5 June; called at Pearl Harbor on the llth; and continued on, via Makin and Majuro, to Kwajalein. There, she embarked the Army's 50th Engineer Battalion which she offloaded at Pearl Harbor on 5 July. Two days later, the carrier got underway for Alameda with 41 aircraft that needed repairs. She arrived on 13 July and, after offloading the aircraft, proceeded to Terminal Island for a three-week yard period. Between 11 August and 13 September, the escort carrier delivered spare parts, replacement aircraft, and pesonnel to Hawaii and the Marshalls. From September 1944 through mid-April 1945, Thetis Bay made five round-trip voyages from California ports to bases in the Pacific ranging from Pearl Harbor to Finschhaven, New Guinea

On 12 June 1945, Thetis Bay arrived at Pearl Harbor from San Diego with a load of aircraft. There, the aircraft were readied for combat within 72 hours; and the ship got underway for Guam. She arrived at Apra Harbor on 25 June and was assigned to Task Group 30.8 for duty as a replenishment carrier. Thetis Bay made her first rendezvous with Task Force 38 on 12 July when she transferred 40 planes to various carriers. She returned to Guam on 22 July and remained there until 24 July to load more aircraft before joining the fast carriers again on the 31st. The ship reloaded at Guam once more and resupplied the task force from 14 August to 8 September when she returned to Apra Harbor en route to the United States.

Thetis Bay arrived at Alameda on 7 September 1945 and was assigned to "Magic Carpet" duty, returning veterans from overseas bases to the United States. She served in this capacity until January 1946 when she began inactivation. The ship was placed out of commission, in reserve, at Bremerton, Wash., on 7 August 1946.

In May 1955, Thetis Bay was towed to the San Francisco Naval Shipyard where she began conversion to the Navy's first assault helicopter aircraft carrier. On 1 July 1955, her designation was changed from CVE-90 to CVHA-1. With that change, she became a complement to the attack transport. Her helicopters supplemented landing craft to give the Navy and Marine Corps the flexibility of a vertical assault capability. She was recommissioned on 20 July 1956, Capt. Thomas W. South, II, in command, and completed conversion six weeks later on 1 September.

The carrier arrived at her new home port, Long Beach, on 20 September. There, helicopter teams from Marine Corps Test Unit No. 1, Camp Pendleton, demonstrated landing and take-off techniques. Thetis Bay participated in amphibious training exercises off the California coast before deploying to the Far East on 10 July 1957. She returned to Long Beach on 11 December 1957 and resumed local operations. On 28 May 1959, her designation was changed to LPH-6, amphibious assault ship.

In August 1959, Thetis Bay was serving with the 7th Fleet when floods on Taiwan left thousands homeless. On the 12th, she was ordered to proceed from Hong Kong to Taiwan and use her 21 large troop-carrying helicopters to aid the flood victims. By the end of the assistance operation, at noon of the 20th, the ship had delivered a total of 1,600,540 pounds of supplies to the destitute Chinese. In addition, her helicopters had lifted 850 passengers to and from various sites in the flooded area.

In May 1960, Thetis Bay participated in a practice night assault landing at Camp Pendleton during which her helicopters carried 1,300 troops and 33 tons of cargo to the objective area. This was the first large-scale night landing of ground forces by carrier-based helicopters.

Thetis Bay deployed to the western Pacific in the spring of 1961. After the assault ship returned to Long Beach, she was transferred to the Atlantic Fleet. She arrived at Norfolk, her new home port, in early December 1961.

During the next three years, the ship operated along the Atlantic coast and in the Caribbean. The highlight of her service with the Atlantic Fleet came during the Cuban missile crisis in October 1962 when she proceeded to the quarantine area with her embarked Marine landing team and helicopter squadron ready for action. Fortunately, the resolute response of the United States to the challenge of offensive Soviet missiles in Cuba convinced the Soviet leaders that America would go to war rather than tolerate this threat to the Western Hemisphere. Rather than face a nuclear war, Russia withdrew its missiles, resolving the crisis. Another memorable event in her service occurred in September 1963 when Thetis Bay proceeded to hurricane-stricken Haiti. She anchored off Port-au-Prince and launched Marine helicopters carrying medical aid and food supplies to thousands of victims of Hurricane "Flora."

Thetis Bay stood out of Norfolk on 5 January 1964 en route to Philadelphia for inactivation and arrived there the next day. She was decommissioned and struck from the Navy list on 1 March 1964. Her hulk was sold in December 1964 to Peck Iron & Metal Co., Inc., Portsmouth, Va., for scrap.