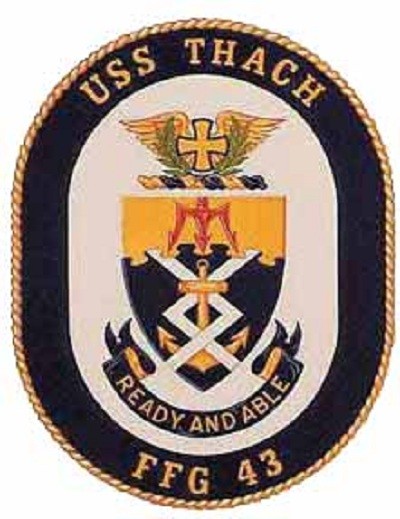 John Smith Thach, born in Pine Bluff, Arkansas, on 19 April 1905, son of James H. and Jo. B. Thach, attended Fordyce High School before his appointment to the U.S. Naval Academy (USNA) in 1923. As a midshipman, he participated in football and wrestling. Graduating and receiving his commission as ensign on 2 June 1927, Thach (given the nickname “Jimmy,” his older brother James H. Thach. Jr., had graduated with the USNA Class of 1923) completed a brief course in aviation at the Naval Academy, and was then (14 July) assigned to battleship Mississippi (BB-41), followed (7 June 1928) by service in battleship California (BB 44).

Reporting for flight training at Naval Air Station (NAS) Pensacola, Fla., March 1929, Thach was designated a Naval Aviator (4 January 1930). In March, he reported to Fighting Squadron (VF) 1, and flew Curtiss F8C-4 Falcon two-seat biplane fighters with that squadron. Thach then (July 1932) served with the experimental division at Hampton Roads, Va., where he gained a reputation for aerial gunnery, repeatedly shooting “E” [excellence] scores. He also served as a test pilot for experimental aircraft, and flew rough water tests of seaplanes. Following his time there, he reported to Patrol Squadron (VP) 9F, based in seaplane tender Wright (AV-1) at San Diego, Calif. He flew the four-engine Hall XP2H-1 biplane flying boat on a non-stop 25-hour test flight from Norfolk, Va., to the Panama Canal Zone (15–16 January 1935).

Thach flew Curtiss SOC-1 Seagulls with Scouting Squadron (VS) 6-B, attached to light cruiser Cincinnati (CL 6) (June 1936), and then Consolidated P2Y-2 patrol flying boats with VP-5-F at Coco Solo, Panama Canal Zone. He was ordered (June 1939) to VF-3 as the gunnery officer, and subsequently (covering the period 1939–1940) received a letter of commendation for his “exceptional skill and technique in aerial gunnery and bombing; efficient and meticulous operation of the squadron gunnery department; marked ability to train other pilots in fighting plane tactics and gunnery…” Thach rose to command VF-3 (December 1940). He evolved the theory that a two-plane fighter formation would be superior in combat to the existing three-plane formation, and developed special offensive and defensive tactics for them.

The Japanese onslaught in the Pacific in December 1941 found Thach in VF-3, the squadron part of the air group attached to carrier Saratoga (CV-3). He participated in the abortive Wake Island Relief Expedition. His squadron was transferred to carrier Lexington (CV-2) following the former’s being torpedoed, and deployed to the southwest Pacific on 31 January 1942. A Japanese Kawanishi H6K4 Type 97 flying boat of the Yokohama Kōkūtai (Air Group) spotted Task Force 11, Vice Adm. Wilson Brown, Jr., in command, en route to attack Japanese forces at Rabaul on New Britain (20 February 1942). 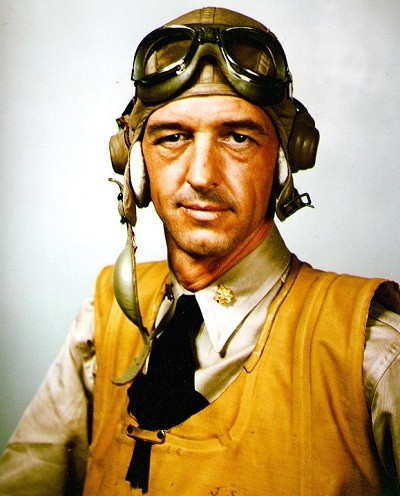 Brown cancelled the strike and two waves of 17 Japanese Mitsubishi G4M1 Type 1 land attack planes of the 4th Kōkūtai attacked the task force off Bougainville in the Solomons. Grumman F4F-3 Wildcats from VF-3 and Douglas SBD-3 Dauntlesses from VS-2 (the latter used in the interceptor role because of a shortage of fighters) broke up the attackers. Lexington avoided damage from bombs and from two bombers that attempted taiatari (body-crashing) suicide dives. Fifteen Japanese bombers, three flying boats, and an Aichi E13A1 Type 0 floatplane failed to return, mostly splashed. Lt. Cmdr. Thach shot down one bomber and assisted in downing a second, and a H6K4 Type 97 flying boat. Wildcat pilot Lt. Edward H. O’Hare shot down four of the attackers and damaged two more, an exploit for which O’Hare received the Medal of Honor. Two Wildcats fell to the enemy with the loss of Ens. John W. Wilson, A-V(N), and seven fighters received damage, some from Lexington’sguns.

After Fighting Two relieved it as the embarked fighter squadron in Lexington, Fighting Three based ashore until late May 1942, when it was transferred to the carrier Yorktown (CV-5), that had been quickly made seaworthy after having returned, damaged, from the Battle of the Coral Sea. Augmented by combat veterans from VF-42 that had served in Yorktown from the beginning of hostilities, VF-3 flew it’s Grumman F4F-4 Wildcats on board the carrier as she sailed from Pearl Harbor on the morning of 30 May 1942.

In the ensuing Battle of Midway, on the morning of 4 June 1942, in leaving VF-3’s ready room, Thach, a leader who emphasized teamwork, told his men: “I don’t want any lone wolves. The wolves don’t last long.” After launch, Yorktown’s Air Group proceeded towards the Japanese carrier task force, with Thach, in F-23 (BuNo 5093), leading the six-plane escort for Bombing Squadron 3 and Torpedo Squadron 3. Japanese fighters, Mitsubishi A6M2 Type 0 carrier fighters, estimated to number between 20 and 30, pounced on the escort as it sought to protect the lumbering Douglas TBD-1 Devastators of Torpedo Squadron 3, and quickly shot down one of the F4Fs. “Zeroes kept coming at us,” Thach recounted later, “It was like being inside a bee hive.”

Together with Ens. Robert A. M. Dibb and Lt.(j.g.) Brainard T. Macomber (both A-V(N), USNR), however, Thach initiated the “beam defense” tactic he had drilled VF-3’s pilots in over Oahu. All told, Fighting Three claimed six “certain” kills (three by Thach personally) and three “probables” before four pilots (including Thach) returned to Yorktown and one to Hornet (CV-8), the former just in time to be on board when a strike from the Japanese carrier Hiryū stopped her dead in the water. Damage control and repair efforts soon enabled the ship to get underway again just as a second strike from Hiryū arrived.

Telling a shipmate “that he would be damned if he would ever be aboard [sic] ship again when the other fellow was attacking,” Thach manned F-1 (BuNo 5171) and led the scramble from Yorktown’s deck as she gathered speed. Soon thereafter, in the ensuing defense of his ship, VF-3’s commander splashed the Nakajima B5N2 Type 97 carrier bomber commanded by Lt. Tomonaga Jōichi, the leader of Hiryū’s attack, that had been holed earlier in the day over Midway.

Thach returned from the Battle of Midway in command of a mixed squadron that included pilots from VF-3, VF-42, and Hornet’s VF-8. In the crucible of combat, he had put the defensive tactics he had developed to the test and survived the encounter. The tactics that he had taught worked so well that he received orders to return to teach Army and Navy pilots what would become known as the “Thach Weave.” In the wake of the Battle of Midway, Thach worked on revising Current tactical Orders and Doctrine, U.S. Fleet Aircraft, Volume One, Carrier Aircraft, USF-74 (Revised). From Pearl Harbor he continued on to the Navy’s Operational Training Command, Jacksonville, Fla., to indoctrinate new pilots with his war-proven tactics, and from there he received assignment to the Fast Carrier Task Force as Air Operations Officer.

Thach developed the system of blanketing the enemy’s airfields with a continuous patrol of carrier-launched fighters that prevented the Japanese planes from taking off, and systematically destroyed them on the ground. He later participated in the planning that led to the Navy’s final offensive blows against the Japanese home islands. Adm. William F. Halsey, Jr., Commander Third Fleet, recognized Thach’s contribution to Allied victory by inviting him to witness the Japanese surrender on board battleship Missouri (BB-63) in Tōkyō Bay, Japan (2 September 1945).

Returning to the United States following the end of the war, Thach served the two succeeding years as Director of Training, on the Staff of the Chief of Naval Air Training, Pensacola, and two years as Special Assistant to the Chief of Naval Air Training. He then (15 June 1950) assumed command of escort aircraft carrier Sicily (CVE 118). Ten days later, the North Koreans invaded South Korea, and Thach took Sicily into the Korean War. Sicily put into Yokosuka, Japan, with a load of ammunition (22 July), and reached the war zone in Tsushima Strait shortly thereafter (3 August). On that date, Thach began the combat operations of the 1st Marine Aircraft Wing in the war when the Vought F4U-4B Corsairs of Marine Fighter Squadron (VMF) 214, embarked on board Sicily, fired rockets at and dropped incendiary bombs on North Korean troops at Chinju. During the succeeding 14 months that Thach commanded Sicily, the planes from the ship flew close air support of allied troops during crucial battles, including the landings at Inchon (September 1950), and the retreat from Chosin Reservoir to Hŭngnam (November–December).

Thach reported as Chief of Staff and Aide to Commander Carrier Division (CarDiv) 17 (August 1951), and then served as Naval Aide to the Assistant Secretary of the Navy for Air (December). He commanded attack aircraft carrier Franklin D. Roosevelt (CVA-42) (May 1953–April 1954), after which he commanded the naval air bases in the Sixth Naval District, headquartered at Jacksonville. He next (September 1955) became the Senior Naval Member, Weapons Systems Evaluation Group, Office of the Assistant Secretary of Defense, Research, and Development. Thach commanded CarDiv 16 (November 1957–December 1959), and then had duty in the Office of the Chief of Naval Operations (December 1959–1 March 1960). Following an assignment in command of the Antisubmarine Defense Force, Pacific (redesignated Antisubmarine Force, Pacific, and later Antisubmarine Warfare Force, Pacific), he reported (8 July 1963) as Deputy Chief of Naval Operations (Air). Thach became Commander-in-Chief, U.S. Naval Forces, Europe, until he retired (25 March 1965–1 May 1967).

The blue and gold colors are traditionally associated with the Navy; blue for the sea and gold for excellence. The pair of wings in the upper crest refers to Adm. Thach's contributions to naval aviation as a pilot and a leader. One of his contributions was his invention of the "Thach Weave," symbolized by the interlaced silver chevrons.

The three-pronged trident is shown pointing down from the sky, symbolizing naval aviation's role of projecting power from the sky and the sea. The three tines of the trident also represent Fighting Squadron Three, which Thach commanded during the earlier battles against the Japanese during World War II. The cross within its outlined border and the wreath refer to Thach-s first and second awards of the Navy Cross and the Distinguished Service Medal.

The anchor in the center of the insignia focuses attention on the nautical nature of both Thach's service to his country as well as that of the guided missile frigate named in his honor. The ship's motto, "Ready and Able," is representative of Thach's preparation and success in battle, as well as the challenge for today's Sailors serving on board Thach. Thach steams in the Arabian Gulf as part of the Ronald Reagan (CVN-76) Carrier Strike Group, 16 August 2009. (Mass Communications Specialist 2d Class Joseph M. Buliavac, U.S. Navy Photograph 090816-N-3659B-038, Navy News Stand)

Thach completed her first deployment, to the Western Pacific (12 May–24 October 1986), as part of Battle Group Romeo, built around battleship New Jersey (BB-62).

Thach, operating with Destroyer Squadron 23 out of San Diego, Calif., was decommissioned on 1 November 2013.