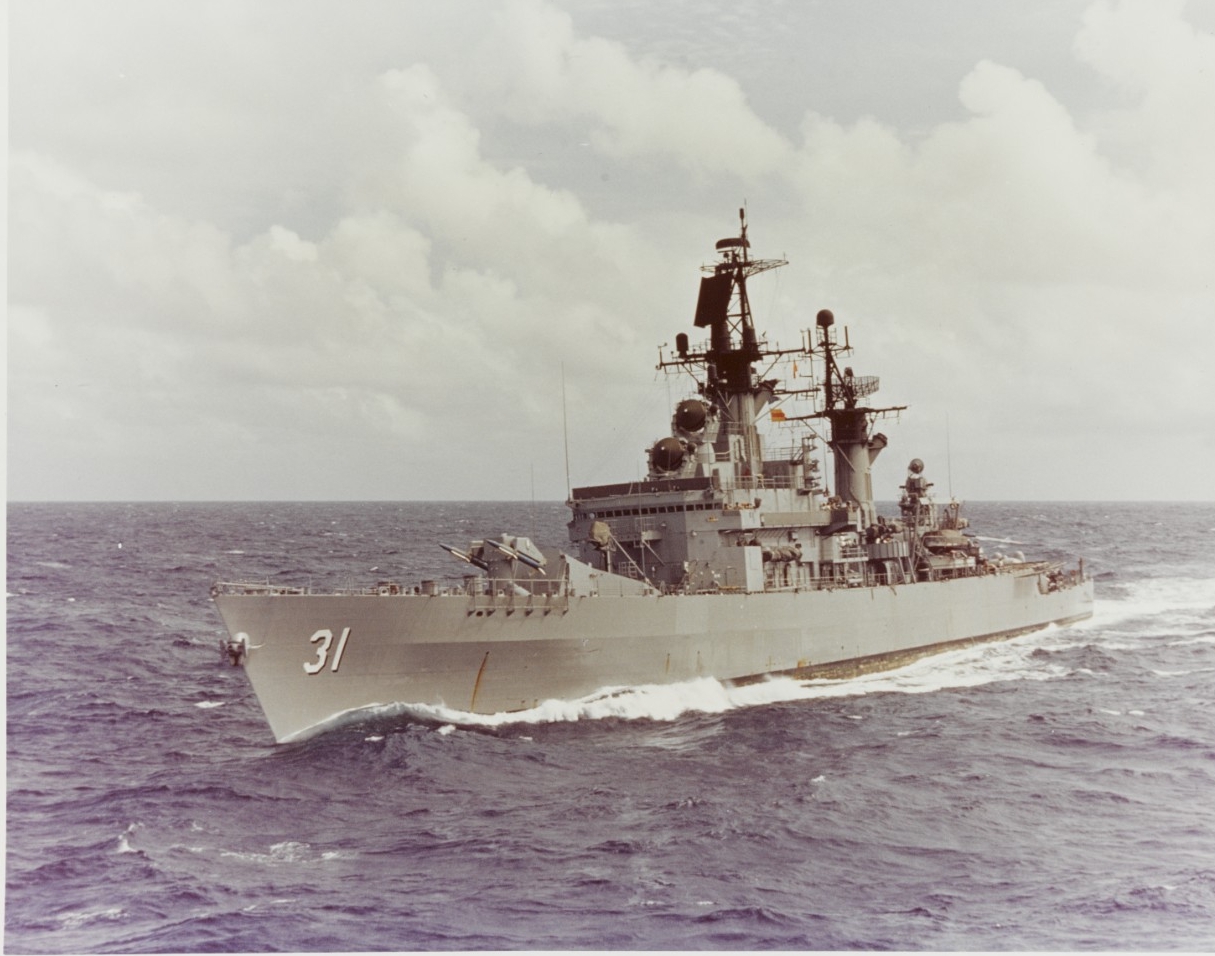 Sterett (DLG-31) underway in the Pacific Ocean on 28 January 1972. Official U.S. Navy photograph from the collections of the Naval History and Heritage Command, NH 106545-KN.

Andrew Sterett, born in 1760 in Baltimore, Md., was appointed lieutenant in the United States Navy on 25 March 1798 and assigned to Constellation as Third Lieutenant. During the Quasi-War with France, he was still serving in Constellation when she captured L'lnsurgente. By 1800, he had risen to First Lieutenant; and he participated in Constellation's action against La Vengeance.

Given command of the schooner, Enterprise, Lt. Sterett led her in the capture of the French privateer, V'Amour de la Patrie, on Christmas Eve 1800. In June 1801, he sailed in Enterprise from Baltimore for service with the Mediterranean Squadron. While on that cruise, Enterprise engaged and captured a 14-gun Tripolitan cruiser and her 80-man crew. In gratitude, Congress awarded Sterett a sword and highly commended his crew. Lt. Sterett continued his Navy career until he resigned his commission in 1805. He died on 9 June 1807, at Lima, Peru.

The third Sterett, a guided missile frigate, was laid down on 25 September 1962 at Puget Sound Naval Shipyard, Bremerton, Wash.; sponsored by Mrs. Phyllis Nitze; launched on 30 June 1964; and commissoned on 8 April 1967, Capt. Edward A. Christofferson, Jr., in command. 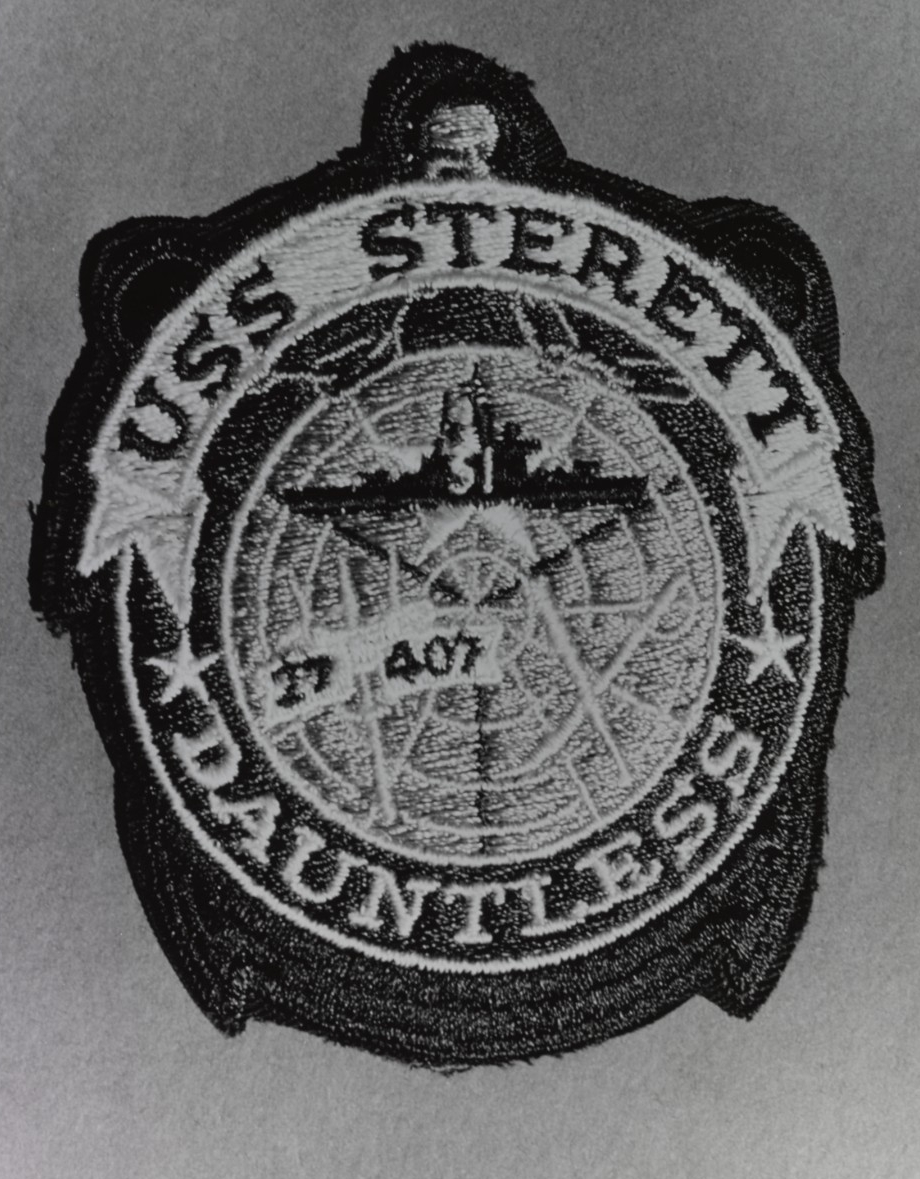 Sterett spent the rest of 1967 operating off the west coast undergoing various post-acceptance tests and trials, participating in shakedown training, and generally preparing for her final acceptance trials held between 18 and 20 December. Arriving in the Puget Sound Naval Shipyard again on 8 January 1968, she underwent post-shakedown availability until 29 March. On that day, she departed from Bremerton for FAST exercises with Camden (AOE-2). After 20 days in home port at Long Beach, Calif., she stood out on 23 April for FLEETEX 2-68, returning on 1 May. With the exception of two short excursions, one for nuclear-capable certification and the other for COMTUEX 8-68, Sterett remained in home port until 19 June, when she departed San Pedro Bay for her first WestPac tour. After stops at Pearl Harbor and Midway, she arrived in Yokosuka, Japan, on 5 July and began preparations for her first line period in the Tonkin Gulf.

One month to the day after her departure from the United States, Sterett got underway again, this time via Subic Bay in the Philippines, en route to PIRAZ duty in the gulf. She put in at Danang, South Vietnam, for briefings on the 30th and departed immediately thereafter. On the last day of July 1968, Sterett relieved Home (DLG-30) as PIRAZ unit. With Rich (DD-820) riding shotgun for her, she plied the waters off North Vietnam until relieved on 5 August. She moved on to duty as sea air rescue (SAR) ship and strike support ship (SSS), which she performed until 4 September. During her first crack at SAR, Sterett directed two successful rescues of pilots. The guided missile frigate continued alternating between PIRAZ, SAR, SSS. and in-port periods until mid-March 1969.

On 17 March 1969, Sterett joined Carrier Division 3 in the Sea of Japan for six days of special operations. From 23 March to mid-May, she sailed along the coasts of Korea, both in the Sea of Japan and in the Yellow Sea, providing protection for Peacetime Aerial Reconnaissance Program (PARPRO) flights, one of which had recently been downed by the North Koreans. By 25 May, she was back on PIRAZ station, off the coast of North Vietnam. She continued in this employment, taking time for a short period of PARPRO picket duty (9 to 13 July), until entering Yokosuka on 11 September for modifications to her weapon systems. Departing Japan at the end of October, Sterett conducted exercises and made another PARPRO cruise (3 to 20 December).

The guided missile frigate continued to shuttle back and forth between Yokosuka and the Tonkin Gulf for the first seven months of 1970. She alternated between PIRAZ duty and SAR/SSS duty, taking time out for a six-day stay at Hong Kong (10 to 16 February), an overnight layover in Keelung, Taiwan, (29 to 30 May), and a two-day visit to EXPO '70 at Kobe, Japan. On 29 July, Sterett set sail from Yokosuka to return to the United States.

Over two years after her departure for the western Pacific, Sterett entered San Diego Bay. On 15 August, she began a leave and upkeep period prior to overhaul at Long Beach. Exactly two months later, she entered San Pedro Bay on her way to the naval shipyard. Sterett underwent a five-month overhaul, during which she was converted to Navy Distillate Fuel and received various weapons modifications. She stood out of Long Beach on 23 March 1971 and arrived in San Diego Bay three days later. Sterett spent all of 1971 either in port on, or operating off, the west coast. After leaving Long Beach and overhaul, she was engaged in post-overhaul trials and refresher training. During July, she visited San Francisco (2 to 5 July), Vancouver, B. C., (9 to 13 July), and Pearl Harbor (21 to 25 July), while conducting a midshipman cruise. From August to December, Sterett was involved in several exercises. By 8 December, she began preparing for another WestPac deployment.

On 7 January 1972, Sterett pointed her bow westward for her second tour of duty off the Vietnamese coast. Visiting Pearl Harbor on the 15th and refueling at Guam 10 days later, she arrived in Subic Bay on the 29th. Following eight days at Subic Bay, she departed for the Tonkin Gulf. From 10 February to 3 March, Sterett remained on PIRAZ station and, on 21 February, became the first Navy ship to direct the downing of a MiG-21 by Air Force CAP. En route to Subic Bay, the frigate participated in ASW exercises with Sculpin (SSN-590). She entered Subic Bay on 5 March and stayed until the 19th. She relieved Chicago (CG-11) as PIRAZ unit two days later. During her second line period of the deployment, Sterett participated in the downing of two more MiG's (30 March) and brought down another with a salvo of Terrier missiles during the Dong Hoi engagement on 19 April. Later on that day, she launched a second salvo of Terriers at an unidentified target, probably a Styx surface-to-surface missile, destroying it in midair. After adding two more successful pilot rescues to her tally, she returned to Subic Bay on 22 May.

Sterett changed roles upon her return to the Tonkin Gulf on 28 May. This time, she took up the south Talos station and acted as back-up for the PIRAZ ship, Long Beach (CGN-9). Following a six-day visit to Hong Kong, she returned to PIRAZ duty on 21 June. On 8 July, her CAP controller vectored Air Force planes to a successful interception of two additional MiG's. Just over a week later, she departed the Tonkin Gulf for Subic Bay, en route to the United States. She returned to San Diego on 8 August and operated off the west coast for the rest of 1972.

She began 1973 just as she had ended 1972, cruising in the southern California operating area. Sterett set off on her third WestPac cruise on 9 March, sailing in company with Camden (AOE-2), Coral Sea (CyA-43), and Reasoner (DE-1063). This task unit, designated TU 37.1.2, stopped at Pearl Harbor and entered Subic Bay on 25 March. During the transit, Sterett's LAMPS helicopter crashed while ferrying the chaplain between ships for divine services. Fortunately, all crew members survived.

By the time Sterett got underway for line duty, the Vietnam cease-fire had already been negotiated. Thus, the ensuing line period was relatively uneventful, consisting of exercises, plane-guard duty, PIRAZ, and antiaircraft warfare responsibility. Underway since 2 April, the frigate entered Sasebo, Japan, on 30 May. After Sasebo, she visited Keelung, Taiwan, from 15 to 19 June and, on the latter day, steamed for the Tonkin Gulf. During this line period, Sterett had to leave the PIRAZ station to evade a typhoon, but resumed her duties on 14 July.

Following liberty in Hong Kong from 18 to 23 July, Sterett steamed for Subic Bay, where she underwent repairs and embarked three midshipmen for their First Class cruise. On 2 August, she set sail for her last line period before returning to the United States. From the 2d to the 16th, she cruised off the coast of Vietnam, then made for Yokosuka, en route to the United States. Sterett stopped at Pearl Harbor on 31 August to disembark the three midshipmen and stood out again the next day for San Diego, arriving on 6 September. She completed 1973 in the San Diego area, preparing for her regular overhaul, scheduled to begin in February 1974.

Sterett earned nine battle stars for her service along the coast of Vietnam.