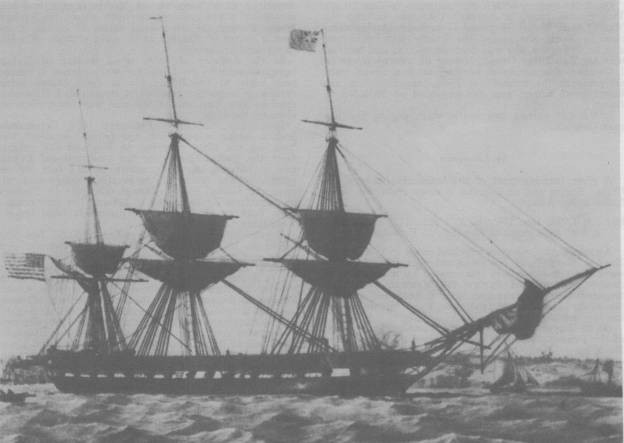 Caption: The frigate, St. Lawrence, off the Isle of Wight in 1848 in a contemporary lithograph. She has just dropped anchor and is firing a gun salute, the British ensign at her foretop.

A river forming part of the boundary between the United States and Canada as it flows from the Great Lakes to the Atlantic.

Although St. Lawrence was laid down in 1826 by the Norfolk Navy Yard, she remained uncompleted on the ways until work on her, interrupted by a shortage of funds, was resumed during the Mexican War. The frigate was finally launched early in 1848 and commissioned on 17 August of that year, Capt. Hiram Paulding in command.

On 29 August, the Navy Department, at the request of the Prussian Minister to the United States, directed Paulding to "take on board a Mister H. W. Foster and rate him Master's Mate." The German states, then striving to establish a German Federation, had recently become aware of the need for a German navy and had asked the United States for help in establishing and training a national fighting force afloat.

The ship got underway on 8 September and headed eastward across the Atlantic. After touching at Cowes, on the Isle of Wight, the ship reached the mouth of the Weser River on 7 October. The next day, she was towed to Bremerhaven. She remained at that port for the next month and one-half while Capt. Paulding visited important cities in several German states to discuss with various leaders matters important to the establishment of the new navy.

Before departing Bremerhaven, St. Lawrence received on board four Prussian midshipmen for training, and they served on the frigate, eagerly learning the customs, discipline, and seamanship which had made the United States Navy respected throughout the world.

The frigate left the mouth of the Weser on 22 November and reached Southampton, England, on 2 December. She was anchored at the port for more than a month while her officers and men exchanged courtesies with their English counterparts, building good will between the two nations. Early in January 1849, the ship sailed for Portugal and reached Lisbon on the 12th. But for a visit to Cadiz, Spain, from 5 February to 14 March, she remained at Lisbon until again sailing for England on 1 May. In July, she returned to Bremerhaven where Paulding discharged the German midshipmen on the 10th, since Prussia was then at war with Denmark, the next country on the frigate's itinerary.

St. Lawrence got underway on the 19th and visited Copenhagen until 2 August when she sailed for Sweden. She arrived at Stockholm five days later and remained at that Baltic port until the 16th.

On her voyage back south, the frigate touched again at Copenhagen, and spent much of the autumn at Bremerhaven before heading for the Mediterranean. She reached Port Mahon, Minorca, in the Balearics, on 3 December 1849. At that time, political conditions in Europe were still unstable in the aftermath of the revolutions which had shaken Europe in 1848; and the American naval force in the Mediterranean had been increased to its greatest strength since the Barbary Wars. During the protracted series of crises, it had been a source of stability in the area without offending any nation or faction.

In the summer of 1850, when tension in Europe began to subside, St. Lawrence was ordered to proceed once more to the Baltic for a short cruise before returning home. She touched at Boston on 1 November, reached New York on the 6th, and was decommissioned there on the 15th.

Recommissioned on 5 February 1851, Commander Joshua Sands in command, the frigate departed New York on the 20th, carrying to England the exhibits from the United States for the International Exposition at London, the first modern world's fair. On her return voyage from this interesting assignment, she gave the United States Charged Affairs in Portugal passage from Southampton to Lisbon. The ship reached New York on 11 August and decommissioned there a week later.

Recommissioned on 18 November 1851, St. Lawrence sailed on 12 December for the Pacific. For the next three and one-half years, she cruised along the west coast of North and South America, from Cape Horn to Puget Sound, occasionally venturing as far west as the Sandwich (Hawaiian) Islands. In 1853, she relieved Raritan as flagship of the Pacific Squadron and continued this duty until she relinquished her role as flagship to Independence on 2 February 1855. She departed Valparaiso five days later and arrived at Hampton Roads on 21 April. She was decommissioned and placed in ordinary at Norfolk exactly a month later.

Recommissioned on 22 September 1856, St. Lawrence sailed for the Atlantic coast of South America to become flagship of the Brazil Squadron early the next year. Her service on the Brazil Station was enlivened late in 1858 by the expedition to Paraguay to obtain redress for the unprovoked firing upon the USS Water Witch during surveying operations in the Parana River. Efforts to settle the affair by negotiations, underway since the incident on 1 February 1855, had been fruitless. However, the presence of a task force, commanded by Flag Officer W. B. Shubrick, added eloquence to the arguments of United States Special Commissioner James B. Bowlin. He promptly obtained a satisfactory apology, an indemnity for damages, and a new commercial treaty which established most cordial relations between the two countries.

The successful conclusion of the expedition freed St. Lawrence to return home, and she was decommissioned at Philadelphia on 25 May 1859.

Still in ordinary at the outbreak of the Civil War, St. Lawrence was hurriedly prepared for action and recommissioned on 21 June 1861, Capt. Hugh Y. Purviance in command. She sailed for the Confederate coast eight days later but was delayed in the lower Delaware by low tides until 8 July when she finally put to sea. After joining the Atlantic Blockading Squadron upon her arrival at Hampton Roads, she headed further south on the 14th. Two days later, she captured British Brig, Herald, off Cape Hatteras, N.C. That blockade runner had escaped from Beaufort, N.C., laden with naval stores and was bound for Liverpool. Capt. Purviance sent the prize to Hampton Roads and continued his voyage south.

On the 28th, a lookout on the frigate spotted a schooner flying English colors and gave chase. Some four hours later, as St. Lawrence was overhauling the schooner, the fleeing vessel ran up the Confederate flag and fired three shots at her pursuer. One passed through the frigate's "mainsail and took a splinter out of the main yard." St. Lawrence answered with her forecastle battery and hit the chase twice, once in her bow. Survivors from the schooner, which sank half an hour later, revealed that their ship had been the Confederate privateer, Petrel, of Charleston. Boats from St. Lawrence rescued all but two of the privateer's 38 crewmen and sent them north in steamer, Flag.

The frigate proceeded south and blockaded off Savannah, Ga., until returning to Hampton Roads in September. However, after minor repairs and taking on provisions, she headed back to blockade duty off the Georgia coast. On 19 October, when responsibility for blockading the Confederate Atlantic coast was divided in two, St. Lawrence was assigned to the South Atlantic Blockading Squadron. On 6 November, she captured English schooner, Jenny Lee, of Nassau, New Providence, laden with rice and tobacco from Darien, Ga., and headed for Nassau. St. Lawrence continued blockade duty, operating along the coasts of Georgia and South Carolina, until ordered north on 27 January 1862.

After replenishing her ammunition, provisions, and water at New York, the frigate sailed for the Virginia Capes for service in the North Atlantic Blockading Squadron.

She reached Hampton Roads on 6 March and was on hand when Confederate ironclad, Virginia,, (formerly USS Merrimac) attacked Union warships there two days later. On that fateful afternoon, gunboat, Cambridge, came alongside with word of the ram's raid and towed St. Lawrence toward the scene of the action. As the two ships passed Sewell's Point, Southern batteries there opened fire with shot and shell and made several hits, but did no serious damage. The two Union warships responded in kind. As they approached the battle scene, observers on the Union warships learned that Cumberland had gone down, Congress had surrendered, and Minnesota had run hard aground. Then, St. Lawrence herself grounded. While Cambridge and tug, Young America, were attempting to refloat the frigate, Virginia opened fire from some 900 yards distance. St. Lawrence replied with rapid fire but her projectiles glanced harmlessly off the ironclad's greased armor. One 80-pound shell from Virginia penetrated St. Lawrence's starboard quarter just above the water line and did considerable damage to her wardroom pantry and to the Assistant Surgeon's stateroom. Toward dusk, Virginia retired, planning to resume the task of destroying the Union men-of-war after the return of daylight. About 2000, St. Lawrence was again afloat; and she withdrew to the anchorage at Fort Monroe. That night, Monitor arrived and took position near Minnesota, still hard aground. The following day, Virginia returned to Hampton Roads where she engaged Monitor in a historic battle which, although inconclusive, revolutionized naval warfare.

After the battle in Hampton Roads, St. Lawrence served briefly in the Potomac to protect the Federal capital from attack by sea. She returned to Hampton Roads late in April, but was reassigned to the East Gulf Blockading Squadron.

St. Lawrence arrived at Key West on the 23d and was soon at sea again looking for blockade runners operating between Cuba and the gulf coast. In July, she became flagship of the squadron, and she performed this duty until sailing north on 7 May 1863 because of a serious outbreak of yellow fever. The ship was decommissioned at Portsmouth (N.H.) Navy Yard, on 30 May 1863.

Recommissioned on 5 August, St. Lawrence sailed to Hampton Roads to become an ordnance ship for the North Atlantic Blockading Squadron. In 1865, she served as a store ship at Norfolk where she was decommissioned on 12 December. In ordinary through 1866, the frigate was used as a barracks ship for marines at Norfolk from 1867 through 1875. On 31 December 1875, she was sold at Norfolk to E. Stannard.