James Arnold Shelton was born in Denton, Judith Basin County, Mont., on 20 September 1916, to John H. and Anice L. (Cady) Shelton. After graduating from high school in 1934, Shelton attended what was then Montana State University (presently the University of Montana) in Missoula. He was working on a Master’s degree in early 1941, when he decided to join the U.S. Navy.

During the first week of January 1941, Shelton took a train to Seattle, Wash., and on 15 January, he enlisted in the USN. In February, he traveled to Naval Air Station, Pensacola, Fla., for officer training and on 20 March, he was appointed as an aviation cadet and underwent training at Pensacola and San Diego, Calif. Commissioned as an ensign, A-V(N), USNR, in October 1941, Shelton was assigned to Scouting Squadron 6 (VS-6) on board the aircraft carrier Enterprise (CV-6) on 17 April 1942.

On 4 June 1942, as the Battle of Midway got underway, Ens. Shelton, with RM3c David W. Craig as radioman-gunner, took off from Enterprise in their Douglas SBD-3 Dauntless dive bomber with the rest of the carrier’s air group in search of the Japanese fleet. After locating the Japanese carriers Kaga and Akagi, Enterprise’s planes initiated a full-scale attack, while SBDs from Yorktown (CV-5) attacked Soryu. Ens. Shelton (in S-6) and Ens. Frank W. O’Flaherty, A-V(N) (in S-5) flew in VS-6’s third division, led by Lt. Charles R. Ware (in S-4), a seasoned veteran, who led them in a dive bombing run west of Kaga.

Pulling out of their dives, the pilots of VS-6’s third division found themselves flying through the inner screen of the Japanese fleet with a sky full of Mitsubishi A6M2 Type 0 fighters. Lt. Ware formed a section with Ens. Shelton and Ens. Carl D. Peiffer, A-V(N), the latter from VS-6’s second division, as his wingmen. Ens. John R. McCarthy, A-V(N), like Peiffer from the second division, then joined up, taking Ens. O’Flaherty from the original third division, and Ens. John C. Lough, A-V(N), from the second and formed a second section. Ware led them close to the water denying Japanese fighters the opportunity to press home their attacks on the SBD’s unprotected bellies. Ammunition and fuel began running dangerously low, but after a 12-15 minute running fight, Ware’s  ad hoc division managed to clear the Japanese screen.

Having managed to circle northeast of the Japanese carrier battle group [Kido Butai] Lt. Ware and his division had just set a homeward course when they sighted a group of attack planes from Hiryu, led by Lt. Kobayashi Mitsuo. Lt. Shigematsu Yasuhiro, commanding the escort, misidentified the SBDs as torpedo bombers and got permission to engage them, expecting to make short work of them. At about that time, Ens. O’Flaherty, his fuel tanks having been holed in the earlier action, had to ditch, with the pilot and his radio-gunner, AMM2c Bruno P. Gaido, taking to their rubber boat.

Meanwhile, Ware and Shelton, McCarthy, Peiffer and Lough again took their SBDs down close to the water, thwarting the Japanese fighter pilots’ ability to execute an effective attack. After a 20-minute engagement, the Japanese broke off the fight, fire from the five radiomen-gunners having damaged two of Shigematsu’s escorting Zeros and forced them to return to their carrier.

McCarthy made it back to safety, reaching Yorktown’s vicinity, where the destroyer Hammann (DD-412) rescued him and his radio-gunner. Ens. O’Flaherty and AMM2c Gaido were rescued by the Japanese destroyer Makigumo, only to be interrogated, then murdered in cold blood. As was the case with Lt. Ware and Ensigns Peiffer and Lough, and the enlisted radiomen-gunners who rode with them, it remains unknown exactly how Ens. Shelton’s plane (BuNo 03225) went down but as he and RM3c Craig were never seen again, they were later declared dead.

For his heroism and devotion to duty while participating in the devastating assault that repelled the Japanese invasion fleet off Midway, as well their gallant fight as they retired from the vicinity of the Kido Butai, Ens. Shelton was posthumously awarded the Navy Cross.

Shelton put out to sea for her shakedown cruise on 21 April 1944, bound for Bermuda, British West Indies. Steaming in company with fellow escort vessel Edmonds (DE-406), Shelton arrived in Bermuda on 26 April, and spent the next month training in that area.

On 22 May 1944, Shelton completed her shakedown and shaped a course for the Boston Navy Yard, Charlestown, Mass. Shortly after her arrival on the 24th, the warship commenced a post-shakedown availability period, which kept her there into mid-June. Shelton stood out of Boston on 16 June and proceeded to New York, N.Y., via the Cape Cod Canal and Narragansett Bay. Shelton arrived in New York on the 17th, and then the next day continued on to Hampton Roads, Va., accompanying the escort carrier Kasaan Bay (CVE-69).

Accompanied by Straus (DE-408), Shelton stood out from Balboa on 28 June 1944, and steamed to San Diego, Calif., arriving there on 6 July. After a brief stay at port, Shelton weighed anchor from San Diego on 15 July and steamed for Pearl Harbor, T.H. She arrived at Pearl on 20 July and then the following day ventured into local waters to conduct sonar exercises with Straus. Shelton again got underway in the local area between 22 and 24 July, in order to perform plane guard duties for the escort carrier Kadashan Bay (CVE-76). She moored back at Pearl on the 25th.

On 26 July 1944, Shelton got underway with the mine sweepers Requisite (AM-109) and Change (AM-159), to escort convoy PD38-T (composed of approximately 12 merchant ships) from Pearl to Eniwetok Atoll, Marshall Islands. After leaving port, Shelton took up a patrol station off the port bow of the convoy. She arrived at Eniwetok on 6 August.

After receiving upkeep on 14 August 1944, Shelton remained in port for most of the next week. On 18 and 19 August, the warship briefly got underway to provide escort and plane guard support for Santee. While performing these duties on the 19th, Shelton rescued Ens. Robert J. Masterson, whose Grumman F4F Wildcat (BuNo 16235) had run out of fuel. Ens. Masterson was unharmed and returned to Santee by breeches-buoy. Shelton moored back at Seeadler Harbor on the 20th.

On 25 August 1944, Shelton conducted an exercise northward of Seeadler Harbor, completing various drills and a compass adjustment. Four days later on the 29th, she sortied with Fanshaw Bay (CVE-70) to assist with flight and gunnery exercises. Shelton remained at Seeadler Harbor for the rest of the month.

The Morotai Attack Force (TF-77) departed the Admiralty Islands on 10 September 1944, to provide air cover and conduct offensive air operations during the assault and subsequent invasion of Morotai Island, Maluku Islands. In late September, a portion of TF-77 departed the area but Shelton remained, operating with TU 77.1.2, which had orders to continue providing air support until the U.S. Army could finish constructing an airfield on the island.

Still operating off Morotai on 3 October 1944, Shelton maneuvered into screening position number 4, in support of Fanshaw Bay and Midway (CVE-63), just after they had executed a pre-dawn launch. According to Lt. Cmdr. Salomon, seas were reportedly moderate and visibility excellent as the screening formation completed “a corpen movement.” In that moment, one of Shelton’s underwater listening devices detected a submarine estimated to be approximately 1,800 yards distant; and within seconds, the unidentified submarine’s screws became “distinctly audible.”

At 0808, just as Shelton’s sound team detected the submarine, Midway sent an urgent TBS transmission “torpedo sighted!” Lt. Cmdr. Salomon immediately “rang all engines ahead full, pulled the general alarm and altered course.” Despite these efforts, within just sixty seconds of the initial report, a second acoustic torpedo struck Shelton’s starboard screw. As a result of the explosion, the main deck, from approximately frame 148 aft, was bent and blasted upward at a 45 to 50-degree angle to the deck. 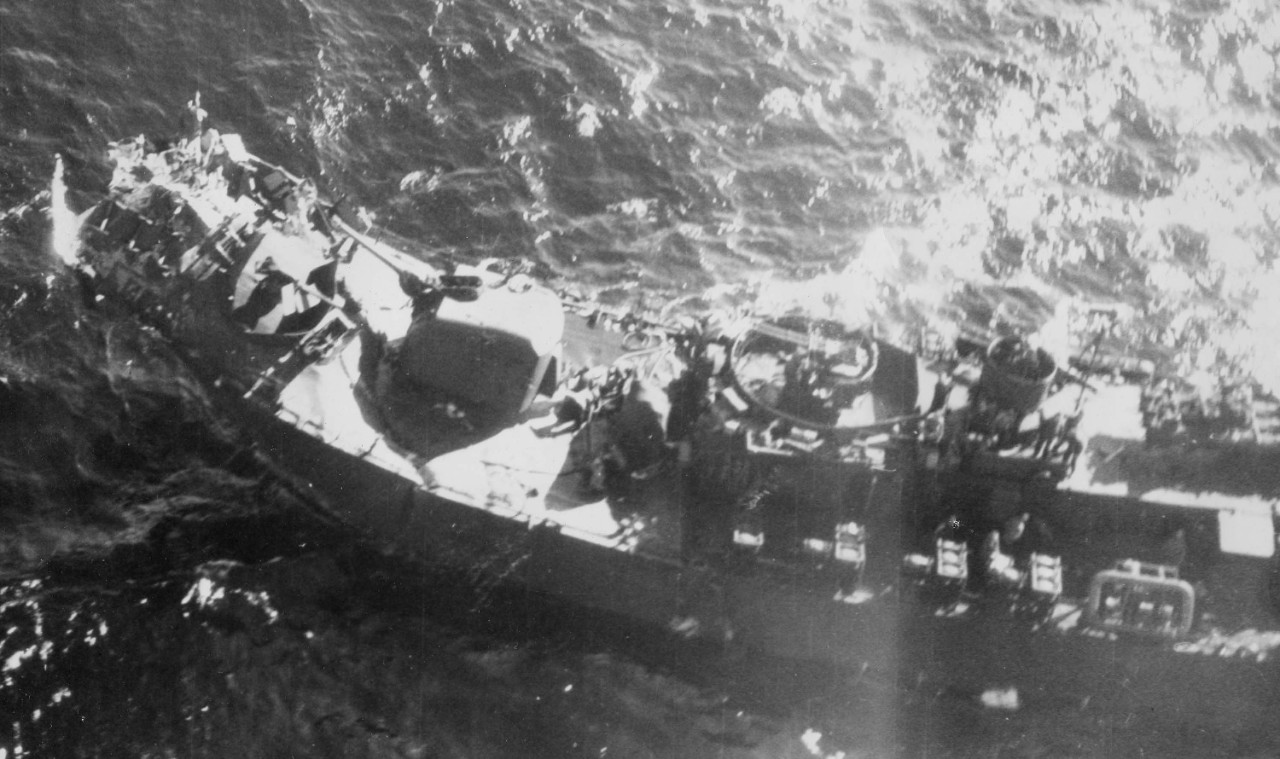 In a close-up view taken from a Midway plane shortly after takeoff, the demolished stern of Shelton can be seen in the wake of her torpedoing by RO-41 on 3 October 1944. (Action Report, USS Midway (CVE-63) Ser 006, Morotai Operation, 10 September to 4 October 1944, dtd 7 October 1944, Record Group 38, National Archives and Records Administration, College Park, Md.)

Standing close by, Richard M. Rowell received Shelton’s critically wounded, who were transferred via whaleboats. Lt. Cmdr. Salomon reported that the ship could be kept afloat and requested “some men be transferred and repairs conducted.” However, with no ships then available to tow, the Commander TU 77.1.2, gave the order to abandon ship. Richard M. Rowell then took on the rest of Shelton’s crew, with Lt. Cmdr. Salomon being the last to leave. Although Richard M. Rowell originally had orders to sink Shelton by gunfire, the order was canceled. Reflecting on the course of events, Lt. Cmdr. Salomon later reported that “The entire complement of USS Shelton without exception performed their assigned duties coolly and efficiently.”

Shortly after taking Shelton’s crew on board, Richard M. Rowell resumed hunting RO-41 and launched a series of unsuccessful depth charge attacks. The enemy managed to escape the area, but Richard M. Rowell and aircraft from Midway (CVE-63) unknowingly began targeting the U.S. submarine Seawolf (SS-197) believing her to be RO-41. In one of the war’s most tragic friendly fire incidents, Seawolf was destroyed by a combination of aerial targeting and depth charge attacks.

Shelton was stricken from the Navy list on 27 November 1944.

Shelton received one battle star for her participation in the Morotai landings (15 September 1944).