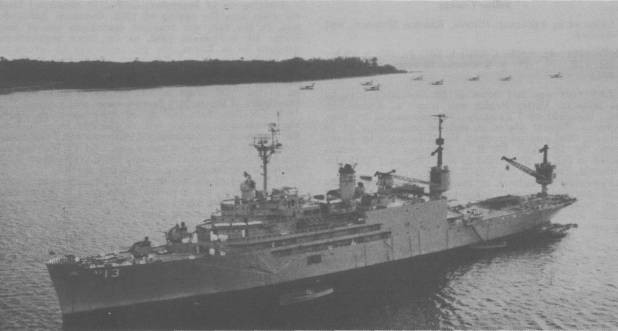 Caption: Salisbury Sound (AV-13) in Subic Bay, Philippines, in November 1963. Martin P-5B (formerly P5M-2) Marlii antisubmarine patrol seaplanes of Patrol Squadron Forty (VP-40) are anchored in the background. Seaplane tenders such as Salisbury Sound were designed to set up advanced bases for flying boats in any reasonably sheltered body of water. Her open fantail and heavy cranes permit her to lift planes on board for servicing. Fuel tanks, repair shops, and stocks of spare parts enable the patrol squadron which the ship supports to operate for extended periods away from its home base.

A sound near Sitka, Alaska.

After shakedown, Salisbury Sound departed San Diego on 12 February 1946 and commenced her first of 19 deployments to the western Pacific, where she served during a portion of every year from 1946 through 1966. The seaplane tender operated at Okinawa, Shanghai, and Tsingtao from March through October 1946. From April into September 1947, she voyaged Okinawa, Tsingtao, and Guam; and later, from May into September 1948, she sailed to Yokosuka, Tsingtao, and Shanghai. Upon completion of several west coast operations in 1949, she steamed to Hong Kong later that year and returned to San Diego on 13
June 1950.

On 26 July 1950, soon after Communist forces invaded South Korea, Salisbury Sound sailed from San Diego. After delivering cargo to Yokosuka and Okinawa, she tended planes at Iwakuni, Japan, and at Okinawa from September into December. Her planes performed reconnaissance work in the Korean area and in the Taiwan Strait. After returning to San Diego on 31 March 1951, she sailed on 1 August, and served at Boko Ko in the Pescadores Islands, at Okinawa, and at Iwakuni, before returning to San Diego on 16 April 1952. Departing Long Beach on 15 August, she again tended planes at Okinawa, before arriving at Alameda, Calif., on 25 March 1953.

From 1954 through 1966, Salisbury Sound operated frequently at Okinawa, and also at Taiwan and Luzon. She served as flagship of the Formosa Patrol Force during the evacuation of the Tachen Islands in February 1955. Effective 1 August 1963, her homeport was changed from San Francisco, Calif., to Whidbey Island, Wash. Voyaging to Vietnam, she visited Saigon from 1 to 4 June 1964. She steamed to Danang, Con Son Island, and Cu Lao Cham Island in 1965, and to Cam Ranh Bay in 1966. Decommissioned on 31 March 1967, she was transferred to the Maritime Administration on 3 July 1968 and entered the National Defense Reserve Fleet, Olympia, Wash., where she remained until sold to Ziddell Explorations, Inc., of Portland, Oreg., on 7 February 1972.