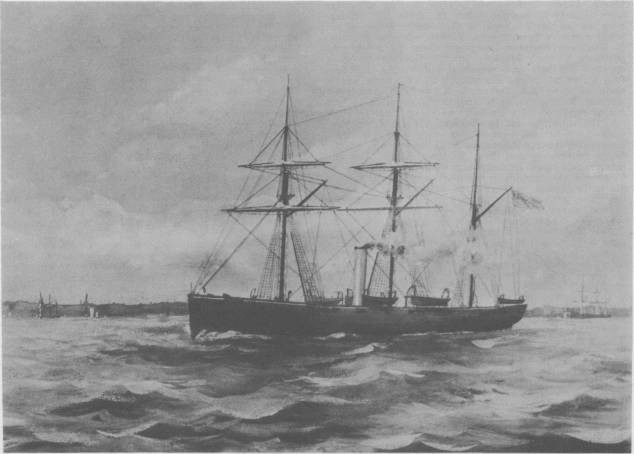 Caption: An artist's representation of the sloop Sacramento underway on steam power. The high fuel consumption of early steam engineering plants, at a time when the United States lacked overseas coaling stations, made it necessary to retain sails for cruising into the late nineteenth century.

The first Sacramento was launched on 28 April 1862 at the Portsmouth Navy Yard, Portsmouth, N.H.; sponsored by a Mrs. Tilton of Boston; and commissioned on 7 January 1863, Comdr. Andrew E. K. Ben-ham in command.

Sacramento's first assignment was blockade duty off the North Carolina coast as part of the effort to eliminate Confederate shipping operations at Wilmington. During her cruising off the Western Bar at Wilmington, 1 May 1863, she captured the British blockade runner Wanderer. Ordered to European waters after refitting, Sacramento departed Boston on 2 February 1864, calling at the Azores, Capetown, and the Canary Islands before arriving at Cherbourg, France, on 5 July 1864. Subsequently, she cruised off the British and French coasts in the search for Confederate vessels engaged in both commerce raiding and blockade running operations. Sacramento assisted in blockading the Confederate gun vessel Rappahannock detained at Calais, France, in early 1865, and during March joined Niagara off Ferrol, Spain, to observe the movements of the formidable Confederate casemate turret ram Stonewall bound for Cuba from Bordeaux, France. Departing Queenstown, Ireland, on 25 July 1865, after the conclusion of hostilities in home waters, Sacramento arrived at Boston on 12 August. Decommissioned on 21 August at the Boston Navy Yard, she remained inactive into 1866.

Recommissioned on 17 September 1866, Sacramento was assigned to special service in Chinese and Japanese waters. Outward bound via the Cape of Good Hope, the sloop called at Madeira before arriving at Monrovia, Liberia. Sacramento embarked President Warner of Liberia, members of his government, and Maryland Senator John Marshall at Monrovia on 15 January for passage down the African coast to Cape Palmas. Subsequently, Sacramento proceeded southward, calling at St. George del Mina, Dutch Guiana; St. Thomas; St. Paul Loando; Capetown; and Madras, India. Soon after departing Madras, Sacramento grounded on 19 June 1867 on reefs at the mouth of the Godavary River, in the state of Madras. Although battered into a total wreck, all hands from Sacramento were saved and eventually embarked aboard SS General Caulfield which arrived in New York on 19 November 1867.