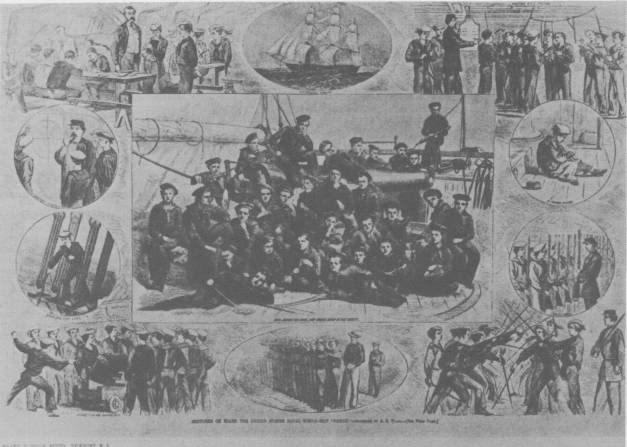 Caption: This group of drawings, by the noted contemporary newspaper artist A.R. Waud, gives an idea of life and activity on board the frigate, Sabine, at the close of the Civil War. Along with basic academic subjects, young apprentices were instructed in seamanship and the use of weapons ranging from cutlasses to "great guns." The abbreviation "U.S.T.S." in the caption stands for "U.S. Training Ship." There was little uniformity in the use of such prefixes until, on 8 January 1907, President Theodore Roosevelt prescribed the designation "United States Ship" (U.S.S.).

A river in Texas forming, in part, the Texas-Louisiana border.

The first Sabine, a ship-rigged sailing frigate, was built at the New York Navy Yard. Her keel was laid in 1822, but she was not launched until 3 February 1855. During this period, she underwent various alterations, the most extensive being a lengthening of her hull by twenty feet. Built essentially from Brandywine plans, she was commissioned on 23 August 1858, Capt. Henry A. Adams in command.

Her first cruise took the frigate to Paraguay in October 1858 with an expeditionary force, commanded by Flag Officer William B. Shubrick, after that country's firing on the U.S.S. Water Witch. The expedition won the United States an indemnity, an apology, and a renewed treaty. Sabine then operated out of New York with the Home Fleet until July 1861.

During the Civil War, Sabine was actively employed along the east coast searching for Confederate raiders. She participated in the relief and reinforcement of Fort Pickens, Fla., in April 1861, under command of Capt. Adams; the rescue of 500 marines and the crew of chartered troop transport Governor during a violent storm off South Carolina on 2 and 3 November 1861; the search for U.S.S. Vermont in March 1862, after the ship-of-the-line had been badly damaged by a storm while sailing to Port Royal, S.C.; and the hunt for C.S.S. Alabama in October 1862 and C.S.S. Tacony in June 1863.

Sabine returned to New York for blockade duty with the North Atlantic Squadron until ordered in August 1864 to Norfolk as a training ship for Navy apprentices and landsmen. After the war, she was transferred to New London for the same purpose until 1868. During 1869 and 1870, she conducted midshipman training cruises to European and Mediterranean ports. In 1871, Sabine was repaired at Boston; and, from 1872 to 1876, she served as a receiving ship at Portsmouth, N.H. In 1877, she was laid up until she was sold on 23 September 1883 at Portsmouth to J.L. Snow of Rockland, Maine.

Sabine (No. 1464) was built in 1889 by the Delaware River Iron Works, Chester, Pa., owned by Mallory Steamship Co., and operated as a coal transport. During World War I, she was scheduled for acquisition by the United States Shipping Board for service in the Naval Overseas Transportation Service as a collier but was never taken over.