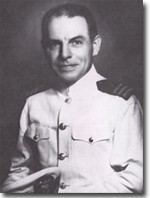 George Snavely Rentz, born on 25 July 1882 in Lebanon, Pa., to William Frezenius and Catherine Susan Rentz, graduated from Pennsylvania College, Gettysburg, Pa., in 1906. He then attended Princeton Theological Seminary, Princeton, N.J., and graduated in 1909, after which he was ordained in the Presbytery of Northumberland (Presbyterian Church, USA) on 18 May 1909. Over the next eight years, Rentz pastored churches in Newark, N.J., and the Pennsylvania communities of Welsh Run, Hershey, and Harrisburg. He married Rebekah Irene Klepper on 11 June 1911 at Mt. Holly Springs, Pa., a union that produced four children: George Snavely, Jr., William Klopper, Mary Catherine, and Rebekah Jean Rentz.

Three months after the United States entered World War I on the side of the Allied and Associated Powers, Rentz was appointed acting chaplain (temporary) with the rank of lieutenant (junior grade) on 3 July 1917. Ordered to the Marine Barracks at Port Royal, S.C., on 15 August, he accepted his appointment and took the oath of office the same day. He reported for duty on 22 August. Detached from duty at Port Royal on 2 October 1918, he reported for duty the following day to the Commanding Officer,11th Regiment of Marines, then forming at League Island [Philadelphia, Pa.]. He sailed to France with the regiment, embarked in the troop transport Von Steuben (Id. No. 3017), and remained with that unit into the following summer, returning to the United States on 7 August 1919. Detached from the 11th Marines on 1 September, he reported to the Naval Proving Grounds, Indian Head, Md., the same day. While serving there, he received a temporary appointment as (ad interim) chaplain with the rank of lieutenant (junior grade), on 25 November 1920, to rank from 1 November. He accepted that appointment on 7 December; his ad interim selection was confirmed on 4 March 1921. 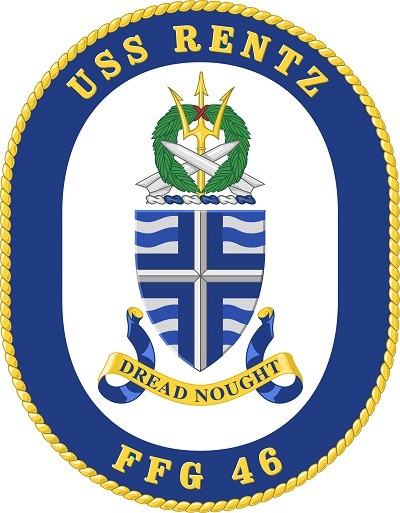 Caption: The colors blue and gold are traditionally associated with the U.S. Navy. The vertical trident represents the sea god Neptune. The crossed missiles indicate the type of ship "Frigate with Guided Missiles." The cross on the shield symbolizes the ship's eponym, Chaplain Rentz. The motto "Dread Nought" tells all to have no fear for the ship is watched over by higher powers.

Detached from the Naval Proving Grounds on 4 May 1921, Lt. (j.g.) Rentz reported to the battleship Florida (BB 30) for duty ten days later. Soon thereafter, on 10 June, he was appointed chaplain with the rank of lieutenant, accepting his appointment and executing the oath of office on 17 July. Detached from Florida upon her arrival in the Canal Zone, Rentz then spent the next two years carrying out his duties as chaplain from ships operating there, including Eagle 31 (PE 31), attached to the Submarine Base at Coco Solo (19 June-30 September 1922), and the minesweeper Quail (AM 15) (1 October 1922-6 July 1924). Detached on 6 July 1924, he reported to the aircraft tender Wright (AV 1) on 29 July. Before the year was out, he received promotion to lieutenant commander on 5 December, to rank from 2 November. On 17 March 1925, he was commissioned a regular chaplain with the rank of commander, to rank from 3 November 1924.

Rentz, detached from Wright on 15 June 1927, he reported to his next duty station, Naval Air Station (NAS) Pensacola, Fla., on 25 July. Detached on 8 January 1930, he traveled to the Philippine Islands, serving at Naval Station, Cavite, reporting for duty on 13 February. Service at NAS San Diego, Ca., followed (19 April 1932-4 January 1934), after which time Rentz served another tour of shore duty at San Diego, attached to the Eleventh Naval District.

Returning to sea duty, Cmdr. Rentz served in the battleship West Virginia (BB 48), the flagship for Commander, Battleships, Battle Force (1 July 1935-11 June 1937), before he returned to shore duty, this time in the Twelfth Naval District, headquartered at San Francisco, Ca., with additional duty in the Receiving Ship there. Detached on 5 July 1940, Rentz traveled once more to the Asiatic Station, reporting on board the heavy cruiser Augusta (CA 31), flagship for the Commander in Chief, U.S. Asiatic Fleet, on 8 September, with additional duty as fleet chaplain. Detached on 20 November, he transferred to Augusta’s sister ship, Houston (CA 30), that had arrived to relieve her at Manila, the same day. Over the next fifteen months, Rentz served in Houston, energetically and enthusiastically devoting himself to the welfare of the ship’s officers and men, who held him in reverence.

When Japanese forces initiated hostilities in the Far East on 8 December 1941, Houston (Capt. Albert H. Rooks) lay in the southern Philippines. She carried out escort and patrol duties through the end of January of 1942. As the Japanese threat to the Netherlands East Indies intensified, the heavy cruiser took part in her first battle on 4 February 1942, when Japanese reconnaissance flying boats of the Toko Kōkūtai contacted and shadowed an allied force (Rear Adm. Karel W.F.M. Doorman, RNN) of four cruisers and accompanying destroyers (sighted the previous day by 1st Kōkūtai aircraft) attempting a transit of Madoera Strait to attack the Japanese Borneo invasion fleet. On the strength of that intelligence, Japanese naval land attack planes (Takao, Kanoya, and 1st Kōkūtais) bombed Doorman’s ships. Chaplain Rentz circulated among the crews of the antiaircraft battery, an observer later writing that when the men “saw this man of God walking fearlessly among them, they…felt no longer alone.”

The1st Kōkūtai scored a direct hit that that disabled Houston’s after 8-inch turret (III) and killed 48 men. In the same battle, light cruiser Marblehead (CL 12) suffered heavy damage and casualties. Both ships put in to the small port on the south coast of Java, Tjilatjap, where Rentz conducted the burial service for the slain. A little less than two weeks later, on 16 February, Japanese planes bombed a U.S. Timor-bound convoy, escorted by Houston and the destroyer Peary (DD 226). Houston’s heavy antiaircraft fire saved the convoy from destruction, limiting the damage inflicted by the enemy planes, but the imminent fall of Timor resulted in the recall of the convoy and its routing back to Darwin. 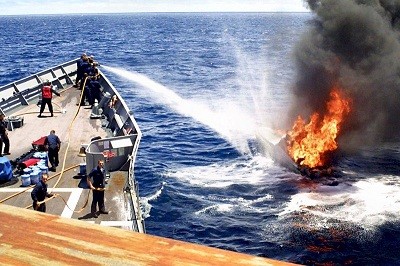 On 27 February 1942, Houston participated in the Battle of the Java Sea when an Allied naval force (Rear Adm. Doorman), of five cruisers and 11 destroyers off Surabaya engaged a Japanese support force (Rear Adm. Takagi Takeo) covering a Java invasion convoy. Japanese gunfire proved largely ineffective, as heavy cruisers Nachi and Haguro expended 1,271 8-inch rounds but achieved only five hits. Of those five, four were duds: one each on Houston and British heavy cruiser HMS Exeter (68), and two on the Dutch light cruiser HNLMS De Ruyter. The following day, after the remnants of Doorman’s force retired, De Ruyter and HNLMS Java having been sunk and Doorman lost, Japanese forces landed on the north coast of Java.
The Battle of Sunda Strait began shortly before midnight of 28 February 1942 as Houston and Australian light cruiser HMAS Perth (D.29; Capt. Hector M. L. Waller, RAN), attempting to retire from Java in the wake of the Battle of the Java Sea, accidentally encountered a Japanese transport force and escorting ships (Rear Adm. Takagi) in Banten Bay, Java, and engaged them, the battle continuing into the mid watch of 1 March, when three Japanese cruisers and nine destroyers attacked the two Allied cruisers. In the ensuing melee, Japanese heavy cruisers Mogami and Mikuma sank Perth, then Houston , both went down fighting to the last, their survivors abandoning them under heavy fire.

“Simply and with great-hearted wisdom and humility,” Rentz sought to relinquish his jacket and his place at the float. No one, however, “inspired by the complete self-abnegation of their spiritual advisor,” would let him carry out his avowed intention. His watchful shipmates brought him back, weaker after each attempt to give up his place. In the end, Beeson recalled the chaplain saying: “You men are young with your life ahead of you, I am old and have had my fun.” As he gasped for breath, growing still weaker, he prayed for Beeson, Willerton, Cook, and Carter, then disappeared, leaving his life jacket on the float. Having none, Beeson put it on. Of the men at the float after the chaplain’s disappearance, only Beeson, who turned 20 years of age that day, survived the war, for Cook died before dawn, and both Willerton and Carter perished in captivity.

For his selfless heroism following Houston’s loss in the Battle of Sunda Strait, Chaplain Rentz was awarded the Navy Cross (posthumously), the only U.S. Navy chaplain so honored during World War II. 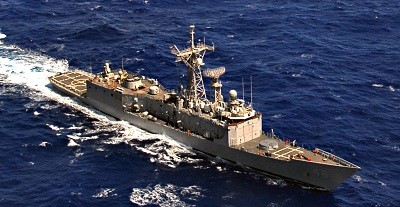 Rentz shifted her home port from Long Beach to San Diego (both Calif., December 1985). The ship, in company with guided missile cruiser Reeves (CG 24) and destroyer Oldendorf (DD 972), visited Qingdao, China (5–10 November 1986). The guided missile frigate next took part in Operation Earnest Will: to maintain freedom of navigation within the Gulf against Iranian aggression (1987). The Americans initially renamed and reflagged 11 Kuwaiti tankers, and Rentz operated as one of the ships that escorted these tankers, and also supported Operation Nimble Archer: retaliation against Iranian-manned oil rigs suspected of laying mines against those ships in the Persian Gulf.

Rentz, with a Coast Guard Law Enforcement Detachment (LEDET) embarked, deployed to the Caribbean and eastern Pacific for Operation Martillo (Spanish for “Hammer”): counter-narcotics patrols (August–November 2013). Barely a week into her deployment, Rentz worked with a Lockheed P-3 Orion maritime patrol plane and intercepted fishing vessel Cperson (P271), smuggling 2,123 pounds of cocaine with an estimated street value of $78 million, north of the Galapagos Islands (August 2013). Rentz transferred the drugs to Coast Guard cutter Forward (WMEC 911) in the Western Caribbean for disposal (15 September). Rentz then disrupted the shipment of an additional 1,000 kilograms of cocaine worth $80 million off the Columbian coast (9 October). The guided missile frigate detected and tracked the suspected smuggling vessel, and directed the Colombian Navy, which intercepted the boat and seized her illicit cargo.

Rentz, operating with Destroyer Squadron One out of San Diego, Calif., is scheduled to be decommissioned on 26 February 2014.