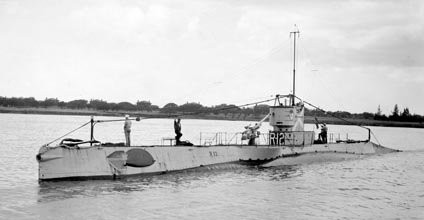 Caption: R-12 painted in No.5 Navy Gray with her identification number in raised letters on her hull forward and in large white letters on a black background on the forward portion of her sail, at Pearl Harbor, circa 27 July 1926, preparing to moor at the Submarine Base. Note officers’ quarters in the background, across the channel. U.S. Navy Bureau of Ships Photograph, National Archives and Records Administration, Still Pictures Branch, College Park, Md.

R-12 (Submarine No. 89) was laid down on 28 March 1918 at Quincy, Mass., by the Fore River Shipbuilding Co.; launched on 15 August 1919; sponsored by Miss Helen Mack, sister-in-law of Comdr. Henry C. Dinger, Inspector of Machinery, Bethlehem Shipbuilding Corp., Quincy; and delivered and commissioned at the Boston (Mass.) Navy Yard on 23 September 1919, Lt. Frank J. Cunneen in command.

R-12 remained at Boston until she headed down the coast on 11 March 1920 to New London, whence she operated until the end of May. She then continued south to Panama, transited the Canal at the end of June, and arrived at San Pedro in July. Redesignated as SS-89 in the fleet-wide assignment of alphanumerical hull numbers on 17 July 1920, the boat departed the California coast for Pearl Harbor, T.H., at the end of August. Arriving there on 6 September 1920, she remained in Hawaiian waters, with occasional exercises off the west coast and off Johnston Island until 12 December 1930. On that date, R-12 and 18 of her sisters got underway to begin the 7,300-mile voyage to the east coast in company with the submarine tender Camden (AS-6) and the submarine rescue vessel Chewink (ARS-3). R-12 returned to New London on 9 February 1931. She conducted exercises with Destroyer Squadrons of the Scouting Force into the spring, then, following overhaul, trained sailors assigned to the Submarine School. On 27 September 1932, she departed New London for Philadelphia where, after decommissioning on 7 December 1932, she joined other R-class boats berthed there in the Reserve Fleet.

Building a two-ocean navy required trained people, and the R-class boats returned to service to provide training ships. Accordingly, R-12 was recommissioned "in ordinary" on 1 July 1940, Lt. Harry B. Dodge in command, and shifted to New London to complete activation. Recommissioned in full on 16 October 1940, she sailed for Panama on 10 December.

R-12 reached Coco Solo on the day after Christmas of 1940, and operated thence "a period punctuated by an annual military inspection (20 May 1941) and a yard availability and docking (27 June-21 July)" through the summer of 1941. She transited the Panama Canal, southbound, on 2 September, operated in the vicinity of Perlas Island, then transited the isthmian waterway again, northbound, on 20 September. Clearing the Canal Zone on 14 October, R-12 proceeded, via the Florida Straits, to New London, her home port, arriving there on 23 October. Subsequently operating in Area George (23-29 November), R-12 departed her home port on 7 December and proceeded via the Cape Cod Canal to Provincetown, Mass., reaching her destination on the 9th. Proceeding thence to Casco Bay, Maine, she conducted operations in those waters (11 December 1941-3 January 1942) until returning to New London, via the Cape Cod Canal, on 4 January 1942. She received an interim docking at New London later that month.

Proceeding from New London to St. Thomas, Virgin Islands, R-12 operated thence, a period punctuated by her annual military inspection on 20 June 1942, until 1 July, when she sailed for Guantanamao Bay. Reaching her destination on 9 July, she trained in Cuban waters until 20 November, when she sailed for Key West in convoy GK-714, sister ship R-15 (SS-92) serving as her relief at Guantanamo. After a time at Key West (23 November-12 December 1942), during which time she received an interim docking period, R-12 departed on the latter date to return to Guantanamo Bay, sailing in company with the submarine chasers SC-695 and SC-1039, reaching her destination on 15 December. She operated in Cuban waters through mid-February 1943. Sailing on 17 February 1943, R-12 paused briefly at Bermuda (22-24 February), before continuing on to her home port, standing in to New London on 21 February. During her time at New London, the boat received a yard availability and docking (March-April 1943). R-12 passed Point Judith on 1 May, bound for Key West, arriving soon thereafter to resume her training work in those waters.

At 0716 on 12 June 1943, R-12 (Lt. Cmdr. Edward E. Shelby), considered a "well-organized and well-trained submarine," put to sea from Key West with 47 souls on board, all of her assigned officers (6), two-thirds of her regularly assigned crew (26 men), enlisted trainees (13), and Lt. A. G. D. Almeida and Lt. J. L. Demoura, two Brazilian Navy observers, on board. She submerged at about 0815 and conducted scheduled sound exercises in concert with the coastal yacht Coral (PY-15), upon completion of which R-12 surfaced and Coral headed back to her base. R-12 then prepared to conduct a torpedo firing, and altered course accordingly, shifting from motors to engines. She proceeded on both engines toward her assigned area, moving at nine knots on course 275 degrees (T), rigged for dive. At about 1223, Lt. Roger N. Starks, R-12's navigator and second officer, reported from the control room: "Forward battery flooding." The collision alarm sounded from below. Lt. Cmdr. Shelby, on the bridge, immediately ordered number one and number two ballast tanks blown. R-12, however, tipped "forward rapidly at a large angle." Lt. Starks, although "standing at the only possible exit" made no effort to use it although he realized that that the uncontrolled flooding of the submarine placed him in grave peril. R-12 sank quickly, taking with her 42 officers and men.

Only the bridge watch survived: Lt. Cmdr. Shelby, Lt. (j.g.) William D. Whetstone, D-V(G), TM3c Edward F. Zielinski, USNR, TM3c John Kapral, USNR, and Sea2c Sydney H. Pool, USNR, who had helped hold a hatch closed in an attempt to give those below a chance to secure it. Swept off the bridge as R-12 began her fatal plunge, Pool swam to aid others in the water.

Finding Lt. (j.g.) Whetstone, only a fair swimmer, struggling, Pool kept him afloat as Whetstone removed his sodden clothes. When that officer began suffering cramps in his legs, Pool had him place a hand on his shoulder to relax, and kept him afloat. After hours in the water, Lt. Cmdr. Shelby began suffering severe stomach cramps, as well as cramps in both legs. Pool supported his commanding officer for five minutes, affording Shelby a chance to relax and massage the cramps out of his legs. Pool then returned to Whetstone, and kept him afloat until the submarine chaser SC-449 reached the sunburned men at 1800.

Pool's courageous actions rendered "at the expenditure of [his] strength and thus at the risk of his not being able to keep himself afloat sufficiently long enough for rescue" earned him a letter of commendation from Secretary of the Navy Frank Knox. The Navy recognized Lt. Starks' "heroism and outstanding performance of duty, and his showing complete and heroic disregard for his personal safety" in the award of the Navy and Marine Corps Medal (posthumously).

Of the survivors of the tragedy that befell R-12 on 12 June 1943, Lt. Cmdr. Shelby, considered "cool, quick-thinking, and resourceful" during the disaster, went on to receive three Navy Crosses for his performance of duty while in command of Sunfish (SS-281); Zielinski would receive a commendation for his conduct of duty as a TMM2c in Archer-fish (SS-311) during that boat's fifth war patrol. Advanced to QM3c for his heroic conduct during the loss of R-12, Pool would be commended for his work as a QM2c during the fifth war patrol of Flasher (SS-249).