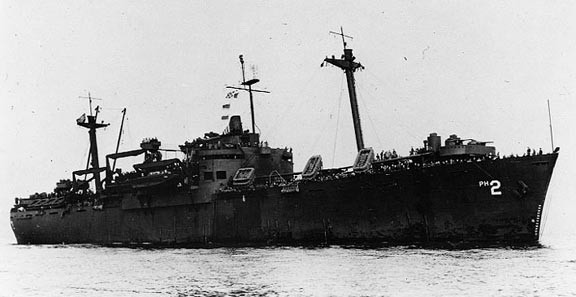 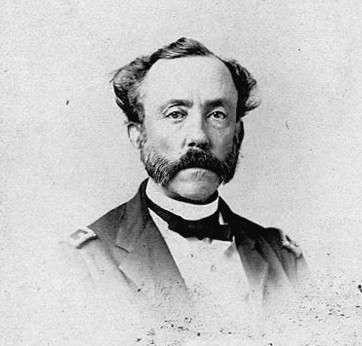 Ninian Pinkney, born in Annapolis, Md., on 7 June 1811, graduated from St. John's College, Annapolis, in 1829, and from Jefferson Medical College in 1833. Appointed an assistant surgeon in the U.S. Navy on 26 March 1834, Pinkney received orders to the sloop of war Erie on 5 May. Ordered to report by 20 June, he joined the ship at Boston, Mass., on 24 June, shortly before she sailed for the Brazil Station. Detached from Erie on 18 September 1837, he began two months of leave on 20 September, later changed to "waiting orders." Ordered to duty at the Naval Asylum at Philadelphia, Pa., on 9 April 1838, he was detached from that duty on 2 April 1839, receiving one month of leave. He then joined the frigate Brandywine, assigned to the Mediterranean Squadron, on 17 August, shortly after she was recommissioned.

On 12 February 1840, Commodore Isaac Hull, commanding the squadron, ordered Pinkney to return to the United States, and the assistant surgeon reported his arrival on 24 April. Ordered thence, on 12 October 1840, to the storeship Relief, on the Pacific Station, Pinkney later served again on board Erie. He was promoted to surgeon on 27 October 1841.

Commodore Alexander J. Dallas, commanding the Pacific Station, granted Surgeon Pinkney permission to return to the United States in February 1844, and he arrived there in April of the same year. Ordered to the Receiving Ship and Naval Station, Baltimore, Md., on 24 June 1844, he received orders to "discharge duties" at the Naval Rendezvous [recruiting station] as well, on 21 April 1845.

Detached from the Baltimore Station on 19 September 1846 and placed in the status of "waiting orders," Pinkney was ordered to Albany on 14 October; he reported to that new sloop of war, assigned to the Home Squadron, a little less than a fortnight later, on 27 October. Transferred to sloop of war Germantown, also in the Home Squadron, three days after Christmas the following year [28 December 1847], he was detached from that ship on 23 February 1848. Carried on the status of "waiting orders" on 1 January of the following year [1849], Pinkney was ordered to the new sidewheel sloop of war Saranac on 4 February 1850, to report for duty on the 24th of that month. Detached from that ship on 22 July 1851, the surgeon was then ordered [10 September] to review candidates for admission to the U.S. Naval Academy. Following another period of "waiting orders," he was ordered to the Naval Academy on 3 April 1852.

Detached from the Academy on 5 July 1855, Pinkney subsequently received orders to the sidewheel frigate Susquehanna on 31 March 1856, and served in that ship as she cruised in the Mediterranean and off the coast of Central America, and later operated in assistance of the steam frigate Niagara in her unsuccessful attempt to lay the Atlantic Cable in August 1857. Detached from Susquehanna on 19 April 1858, he was ordered to the U.S. Naval Hospital at Norfolk on 21 October, his actual time of reporting delayed from 1 November to 1 December 1858. Detached from that medical facility ashore on 9 June 1859, Pinkney received orders to join the screw frigate San Jacinto as she prepared for a cruise to the coast of Africa.

Illness, however, shortened Pinkney's tour of duty in San Jacinto, as he was detached from the ship at Cadiz, Spain, and ordered home "because of ill health" on 28 March 1860. Arriving back in the United States on 23 April, he went to Easton, Md., where he apparently remained until he was ordered to special duty in Washington, D.C., on 8 June 1861. Detached from duty in the capitol on 12 December 1861, he received orders to report as the Fleet Surgeon, Mississippi Squadron, on the last day of 1861.

Pinkney served in the Mississippi Squadron for the duration of the Civil War, performing "the most arduous duty in caring for the sick and wounded." He succeeded in getting possession of the Commercial Hotel, in Memphis, Tenn., a building "admirably located and well adapted for hospital purposes" in March 1863. The shortage of assistant surgeons compelled Pinkney to serve on board the U.S. Navy Hospital Ship Red Rover, "where he has been of great service fitting out his department." Acting Rear-Admiral David Dixon Porter, Commanding the Mississippi Squadron, called Pinkney's presence "absolutely necessary...many cases occurring where his great experience as a surgeon enabled him to save life in more than one instance." Porter used the occasion to dispel any misgivings about the fleet surgeon's "little peculiarities" [Pinkney was known to be of "a 'peppery' nature and stood firmly on his dignity and rights"], writing to Secretary of the Navy Gideon Welles on 30 March 1863 of Pinkney that "...a more zealous, devoted officer to the profession, and to the country, does not exist anywhere..." Soon thereafter, the fleet surgeon directed the provision of new ships fitting out at St. Louis and Cincinnati with medical stores during June, 1863, and later that summer supervised the conversion of a seized Rebel building at Memphis, Tenn., into a hospital. Pinkney received the wounded from the fall of Fort Pillow in April 1864, on board the Hospital Ship Red Rover, and treated them. Subsequently, one of the nursing Sisters, employed on board Red Rover, wrote to express her appreciation for the kindness Pinkney had extended to them. "Through them," Sister Angela, of the Order of the Holy Cross, wrote on 11 August 1864, "I have learned to know and esteem Dr. Pinkney as one of the best and most cherished of the noble corps comprising the Navy."

Detached on 15 June 1865, Pinkney, over the next four years [until 8 November 1869], performed a succession of duties, serving as a member of the Board of Visitors of the U.S. Naval Academy, presided over the board that examined candidates for admission to the Academy, and served as a delegate to represent the Medical Department of the Navy to the Medical Department in England. Ordered to duty at Washington, D.C., on 1 October 1870, he was promoted to the rank of medical director on 3 March 1871. Detached from the Washington Navy Yard and retired with that rank on 7 June 1873, Pinkney, who received a doctor of laws degree from his alma mater, St. John's College, Annapolis, in 1873, ultimately died in Easton, Md., on 15 December 1877.

The steel-hulled C2-S1-A1 cargo ship Alcoa Corsair was laid down under a Maritime Commission contract (MC Hull No.176) on 3 June 1941, at Oakland, Calif., by the Moore Dry Dock Co.; launched on 4 December 1941; sponsored by Miss Ruth Grove of Berkeley, Calif.; designated for U.S. Navy use as a "transport fitted for the evacuation of wounded" (APH-2) and assigned the name Mercy on 23 May 1942; was renamed Pinkney on 13 August 1942; delivered to the Navy on 27 November 1942 and commissioned on the same day, Comdr. Albert L. Hutson in command.

Following extensive fitting out and shakedown training, Pinkney departed San Diego for Pearl Harbor and the South Pacific, 27 January 1943. In mid-February, she arrived at Espiritu Santo, whence she sailed to Purvis Bay to deliver reinforcements and replacements to the veteran units of the fight for Tulagi and Gavutu. Throughout the remaining battles for the Solomons, among them Munda, Vella Lavella, Shortlands, Bougainville, and the numerous engagements in the "Slot", she brought men, food and ammunition forward and evacuated casualties from field hospitals to better facilities on New Caledonia and in New Zealand. She also transported American and New Zealand nurses to and between various southwest Pacific hospitals.

By August 1944, island-hopping had carried the Allies through the Marshalls and Marianas. On 8 September 1944, Pinkney departed Guadalcanal for the Palaus, the next group enroute to the Philippines. On the 15th, she delivered her passengers, men of the 1st Marine Regiment, to tank landing vehicles (LVTs), that took them on to the beaches at Peleliu. She then took up a position 6,000 yards off the assault area to expedite offloading of equipment and embarkation of casualities. On the 20th she sailed for Manus, whence she returned to the Palaus to evacuate the wounded.

In early October 1944, she returned briefly to the Solomons, then sailed for Hollandia, then the Philippines. Into November, she evacuated casualties from Leyte to Hollandia, Manus, and New Caledonia. In December, she prepared for the Luzon invasion. On 9 January 1945, she landed Army troops on the Lingayen beaches, and, once again, assumed responsibilities for the care and evacuation of casualties, this time to Leyte.

In late February 1945, while en route to the Solomons, she was diverted to Guam, thence to Iwo Jima. On 28 February, she returned to Guam, disembarked her patients and began preparations for her last campaign, Okinawa.

On 1 and 2 April 1945, Pinkney participated in the feints against southern Okinawa, then shifted to the Hagushi assault area where she landed USMC combatant and hospital units on the 10th. Casualties, from ships and from ashore, were soon filling her wards. Caring for patients and expediting transferral of others to the hospital ship Samaritan (AH-10), she dodged enemy shells and kamikazes until the 28th, when, at 1730, a lookout spotted a low-flying kamikaze closing the ship. Seconds later, an explosion rocked Pinkney, rupturing water lines, electrical conduits, and steam pipes; a sheet of flame walled off the after end of the superstructure. Ammunition began to explode. Damage control parties threw live ammunition overboard while rescue parties evacuated all but 16 patients (who had been killed in the initial explosion) to safety. Rescue tugs and landing craft moved in to assist in fire-fighting, but the flames raged for another three hours, by which time Pinkney had lost 18 of her crew and had begun to list heavily to port.

Following temporary repairs, Pinkney got underway for Saipan on 9 May 1945, bound for the United States. She arrived at San Francisco on 8 June, underwent repairs that lasted through the end of hostilities, and on 21 October, sailed for the Far East again, this time to carry replacements and occupation troops to Tokyo and Sasebo and return with veterans.

By February 1946, she had completed another west coast-Far East run. Inactivation followed, however, and on 6 April 1946, Pinkney was decommissioned. Deemed "not essential to [the] defense of the U.S.," she was stricken from the Navy list on 9 September 1946 at Port Townsend, Washington; that same day she was delivered to the Maritime Commission and simultaneously transferred to the Army Transportation Service (ATS).

Converted to a transport by the Puget Sound Shipbuilding and Dry Dock Co., and renamed Private Elden H. Johnson on 31 October 1947, in honor of the late Pvt. Elden H. Johnson, 15th Infantry, 3rd Infantry Division, who was awarded the Medal of Honor, posthumously, for heroism in battle near Valmontone, Italy, on 3 June 1944, she remained with the ATS until returned to the Maritime Commission, thence back to the Navy on 1 March 1950.

Reinstated on the List of Naval Vessels on 28 April 1950, Private Elden H. Johnson was designated T-AP-184 and joined the newly formed Military Sea Transportation Service (MSTS) and was assigned a civil service crew. As an MSTS ship, she plied the Atlantic-Mediterranean-Adriatic waters as she had under ATS, operating out of New York, N.Y., and Norfolk, Va., until mid-1951, when runs to ports such as Trinidad, B.W.I., San Juan, Puerto Rico, Guantanamo Bay, Cuba, and the Canal Zone were added to her schedule. She ranged as far as Argentia and St. John's, Newfoundland, to eastern Mediterranean ports.

On 26 December 1957, Private Elden H. Johnson was permanently transferred to the Hudson River group of the Maritime Administration's National Defense Reserve Fleet, and her name was stricken from the Naval Register. Ultimately, the ship was sold on 28 September 1970 to Tung Ho Steel Enterprise Corp., Taiwan, and broken up for scrap.