Battle in World War II; named to commemorate the valor of the Navy’s III Amphibious Force in the assault and capture of Peleliu, the southernmost island of the Palau group, 15 September-19 October 1944. Though naval gunfire and air strikes had reduced every visible land target to rubble, the veteran 1st Marine Division found “Fortress Peleliu” an extremely formidable objective. Into the island’s main ridge system, the Japanese had constructed possibly the most effective defenses in the Pacific. The natural caves in the jagged limestone ridges allowed for an interconnected series of underground strongpoints that were protected by sand and concrete and were almost impervious to aerial or naval bombardment. Traditional Marine valor and courage, however, later matched by the Army’s 81st Division, eliminated the enemy garrison in this successful operation to secure an advanced air base for future operations in the Pacific.

The stars across the top of the shield represent the eight Medal of Honor recipients from the Battle of Peleliu Island in 1944. Centered is the large Roman numeral "V" which represents the hull number of the ship, LHA-5. The four-pointed star in the "V" identifies the four functions of the landing force and the sustaining of its operations ashore. In the lower left-hand side of the shield is a ring which by tradition of heraldry, symbolizes the fifth born. The 1st Marine Division emblem is the constellation Southern Cross with the numeral '1' superimposed.

"PAX PER POTENS" ("Peace through power") 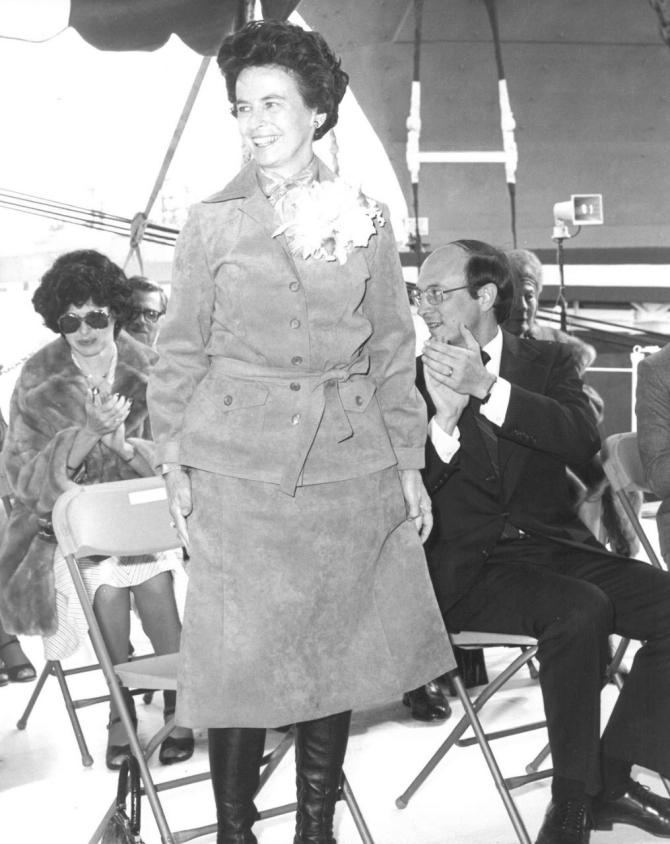 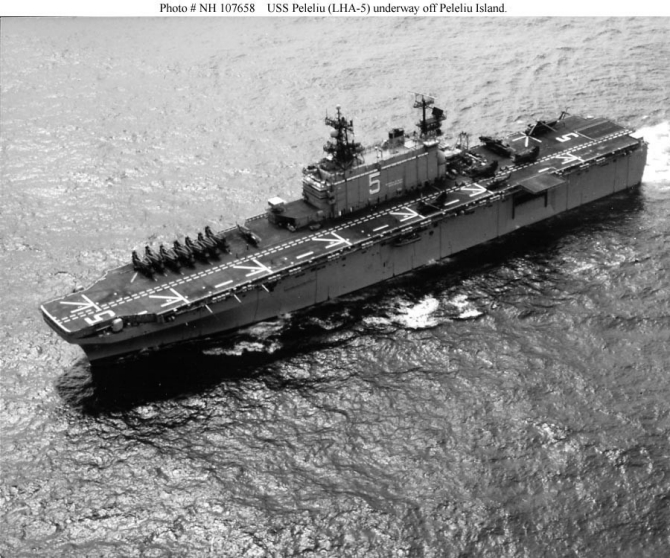 From April through August 1994 the Peleliu Amphibious Ready Group (ARG) participated in Operation Distant Runner and Operation Support Hope as part of the response to the civil war between the Hutus and Tutsis in Rwanda.

In April and May 1997 the Peleliu ARG deployed to the Arabian Gulf as part of the Middle East Task Force supporting the United Nations disarmament inspections in Iraq.

Having departed the Arabian Gulf Peleliu deployed to East Timor and arrived on 26 October 1999 to relieve Belleau Wood (LHA-3) in the conduct of communication and logistical support for the peacekeeping mission of the International Force for East Timor and Operation Stabilize. Peleliu completed that mission on 29 November.

On 13 August 2001 the Peleliu ARG consisting of Peleliu, Dubuque (LPD-8) and Comstock (LSD-45) with the embarked 15th Marine Expeditionary Unit (MEU) departed the West Coast. From 15-17 September the Peleliu ARG conducted humanitarian operations in East Timor. With the Al-Qaeda terrorist attacks of 11 September 2001, however, the Peleliu ARG received orders to report to the Central Command’s (CentCom) Area of Responsibility (AOR) on 19 September and began planning for possible non-combatant evacuation operations in Pakistan. On 28 September the Peleliu ARG arrived in CentCom’s AOR and reported to the Fifth Fleet. On 7 October the U.S. initiated Operation Enduring Freedom (OEF) by launching missile and air strikes against preplanned targets in Afghanistan and dropping humanitarian aid packages to the Afghan people. Peleliu was the first ship to deploy Marines in Afghanistan. On 28 October the Peleliu ARG received warning order regarding security operations in support of World Trade Organization conference in Doha, Qatar and two days later, on 30 October, Secretary of the Navy Gordon R. England visited Peleliu. From 9-13 November the Peleliu ARG provided security for the World Trade Organization meetings in Doha the ship then moved to the Horn of Africa and participated in Exercise Image Nautilus in Djibouti. On 20 November Naval Expeditionary Task Force (TF) 58 embarked on board Peleliu. On 25 November TF 58 assumes operational control of the operations area. The first half of the assault force departs Peleliu on board three CH-53E Super Stallion helicopters. Later the second half departed the ship. John Walker Lindh, an American Taliban captured while fighting against Northern Alliance forces outside Kunduz and then held captive in the Qala-e-Jangi fortress, was transferred to Peleliu on 14 December. On 22 December, General James L. Jones, 32nd Commandant of the Marine Corps visited Peleliu. On 24 December the 15th MEU was ordered to begin retrograde operations and reconstitute on board the Peleliu ARG. 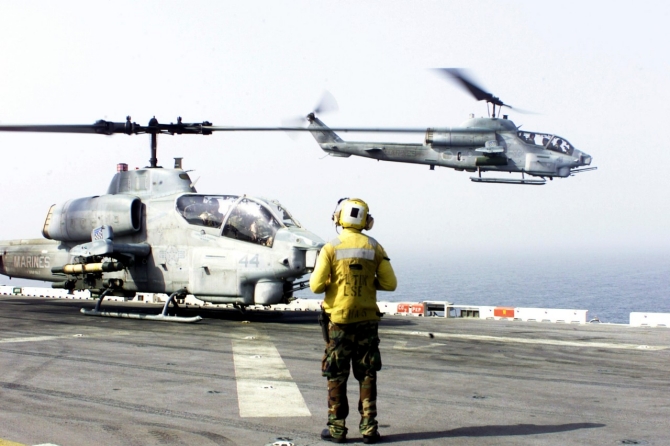 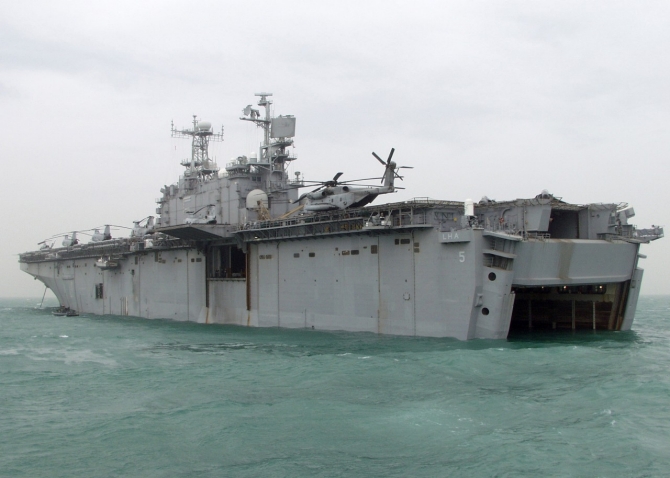 On 22 August 2003 Peleliu departed San Diego for a surge deployment in support of Operation Iraqi Freedom. On 29 August she made a port call at Pearl Harbor Naval Station. 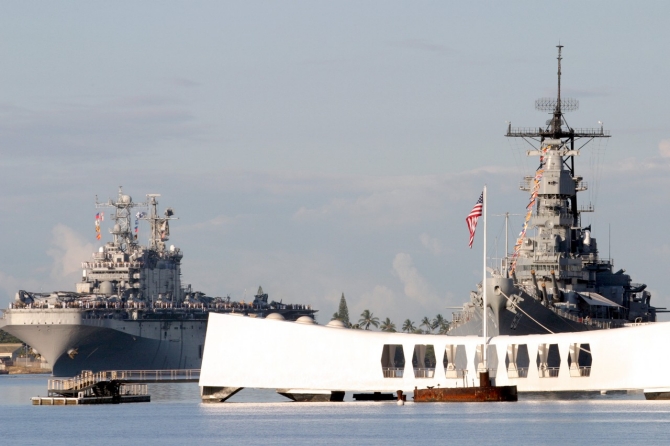 On 23 July 2008 Rear Adm. Kendall L. Card, Commander, Task Force (CTF) 158 visited Peleliu. On 8 August Peleliu and the 15th Marine Expeditionary Unit received a distress call from the Singaporean cargo ship, MV Gem of Kilakarai, in the Gulf of Aden which reported being under attack from pirates aboard two skiffs. The pirates carried out their assault with small arms and rifle-launched grenades. Only 10-miles away, Peleliu launched three helicopters which successfully drove away the pirates.

In May 2010 Peleliu departed San Diego Naval Station as the command ship of the Peleliu Amphibious Ready Group (ARG). The other ships in the ARG were Dubuque (LPD-8) and Pearl Harbor (LSD-52). Also embarked was the 15th Marine Expeditionary Unit (MEU). The Peleliu ARG relieved the Nassau ARG in the Fifth Fleet area of responsibility in July. Peleliu first operated in the Gulf of Aden, conducting maritime security operations. While on this deployment she also completed multilateral military training, conducted maritime security operations, provided close air support for operations in Afghanistan as part support of Operation Enduring Freedom, and undertook counter-piracy operations. In August severe flooding from monsoon rains struck Pakistan. On 9 August the Peleliu ARG arrived off Karachi, Pakistan and conducted humanitarian aid and disaster relief operations. Peleliu and the Marines of the 15th MEU concluded the Pakistan relief operations on 31 October. 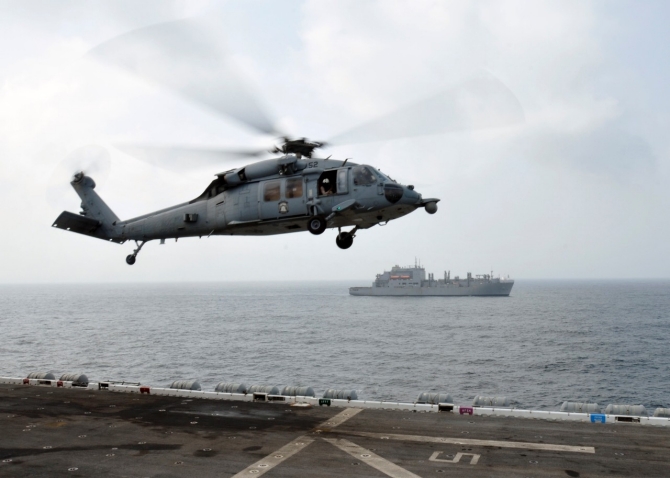 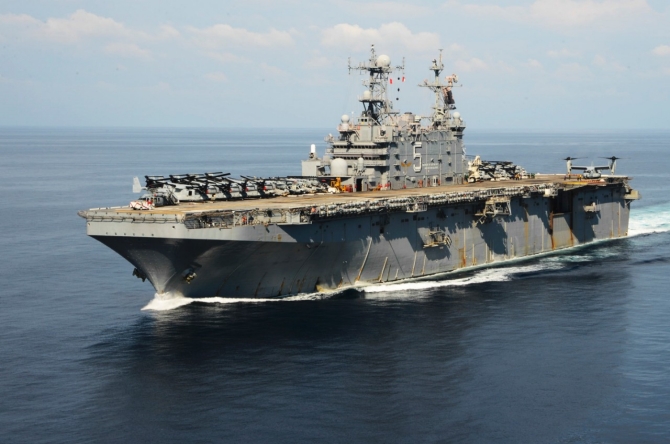 From January through March 2012 Peleliu participated in Exercise Iron fist with Comstock (LSD-45).

On 24 December 2014 Peleliu returned to Naval Base San Diego from a six-month deployment to the western Pacific. Upon her return the crew made preparations for decommissioning. Peleliu decommissioned on 31 March 2015. She was then towed to the Ship Maintenance Facility, Pearl Harbor and laid up in reserve. 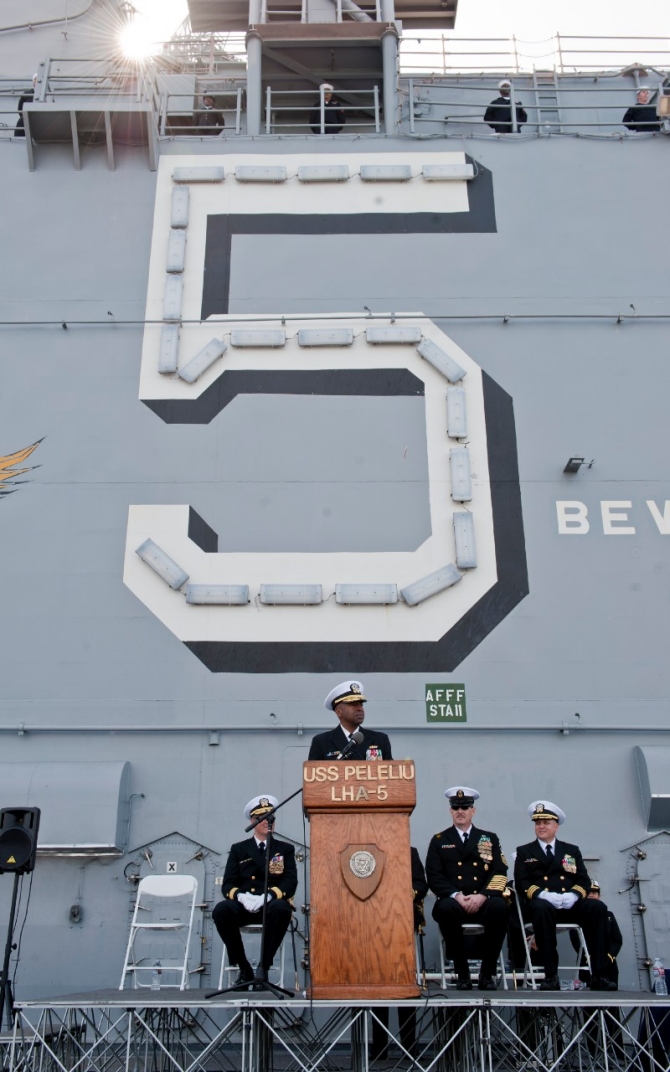