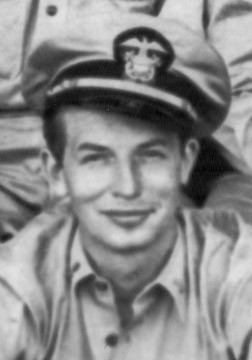 Oswald Aaron Powers, born in Marine City, Mich., on 25 November 1915, enlisted in the U.S. Naval Reserve as a seaman 2nd class, V-5, USNR, on 6 November 1940 at the U.S. Naval Reserve Aviation Base (NRAB) Grosse Isle, Mich., and was placed on inactive duty that same day. Reporting for elmination flight training at Grosse Isle on 15 November, he satisfactorily completed that instruction on 14 December, and was retained on active duty. Appointed aviation cadet, USNR, on 5 February 1941, to rank from 1 February, he was transferred to the Naval Air Station (NAS), Pensacola, Fla., on 6 February, and was issued a good discharge as a seaman 2nd class on 9 February to accept his appointment as aviation cadet.

Reporting to NAS Pensacola on 10 February 1941, Powers accepted his appointment and executed the oath of office the same day. Detached on 15 July and transferred to NAS Miami for "further active duty undergoing training," Powers was appointed a naval aviator (heavier than air) on 12 August 1941. Released from "active duty involving training" on 5 September, he reported to NAS Miami that same day, the same day he also accepted his appointment and executed the oath of office as ensign, A-V(N), USNR. Five days later, on 10 September, Ens. Powers was detached from NAS Miami and was transferred to the Advanced Carrier Training Group, Pacific Fleet, at NAS San Diego, Calif., reporting for "active duty involving flying under training" on 3 October. Detached from NAS San Diego on 4 November, he reported to Torpedo Squadron (VT) 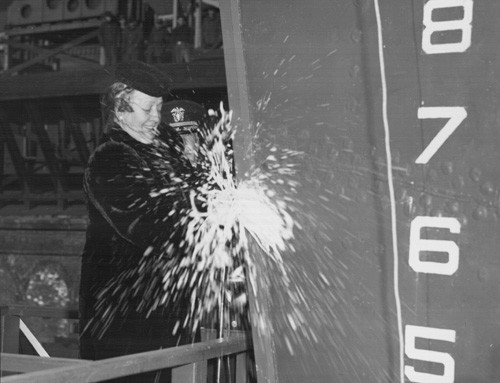 Caption: Mrs. Ella M. Powers smashes a bottle of Friar's New York State domestic champagne on the bow of the ship named for her son, who perished in Torpedo Squadron 3's gallant attack on the Japanese carrier force in the Battle of Midway on 4 June 1942. (Ships History Branch, Ship Name and Sponsor Files)

After the torpedoing of Saratoga on 11 January 1942, and her subsequent departure for repairs at Puget Sound, VT-3 was based ashore, first at NAS Pearl Harbor, at Ford Island, T.H., standing alert duty for island defense, then at NAS Kaneohe Bay, whence the squadron trained and continued to stand alerts. On 30 May 1942, assigned to the air group of Yorktown (CV-5), replacing VT-5, VT-3 flew on board as that carrier sailed to participate in what would become known as the Battle of Midway. On 4 June 1942, Yorktown launched VT-3, and Bombing Squadron 3, covered by fighters from Fighting Squadron 3, to attack the Japanese carrier force in concert with a strike from Enterprise (CV-6) and Hornet (CV-8). Circumstances, however, dictated that only the Yorktown Air Group attacked as a unit, with VT-3 the last of the three torpedo squadrons to execute their brave low-level attacks. Japanese Mitsubishi A6M2 Type 00 carrier fighters, however, overwhelmed the six-plane VF-3 covering element, and, in concert with heavy antiaircraft fire from the carriers and their screening ships, splashed ten of the twelve of VT-3's Douglas TBD-1 Devastator torpedo bombers. Ens. Powers and his radio gunner, Sea2c Joseph E. Mandeville, perished in the attack. Powers was awarded the Navy Cross (posthumously), for his "self-sacrificing gallantry and fortitude...in keeping with the highest traditions of the United States Naval Service..."

Oswald A. Powers (DE-542) was laid down on 18 November 1943 at the Boston (Mass.) Navy Yard, and launched on 17 December 1943, sponsored by Mrs. Ella M. Powers, mother of the late Ens. Powers. Construction, however, was stopped before completion of the warship, and her contract was cancelled on 7 January 1946. The hull was sold for scrap on 17 June 1947 to John J. Duane Co., of Quincy, Massachusetts.